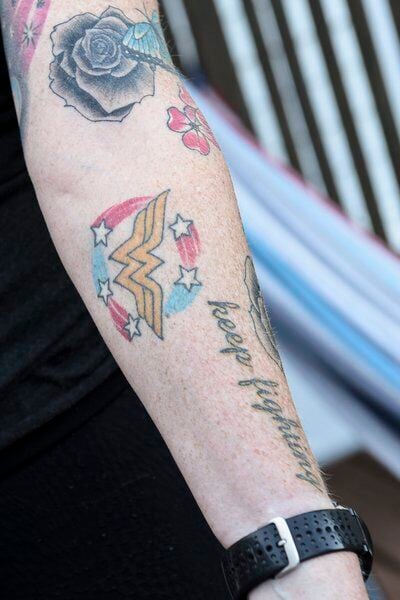 Several of Pelkey’s tatoos are inspired by her bout with breast cancer, including the Wonder Woman logo and a visible reminder to “keep fighting.” 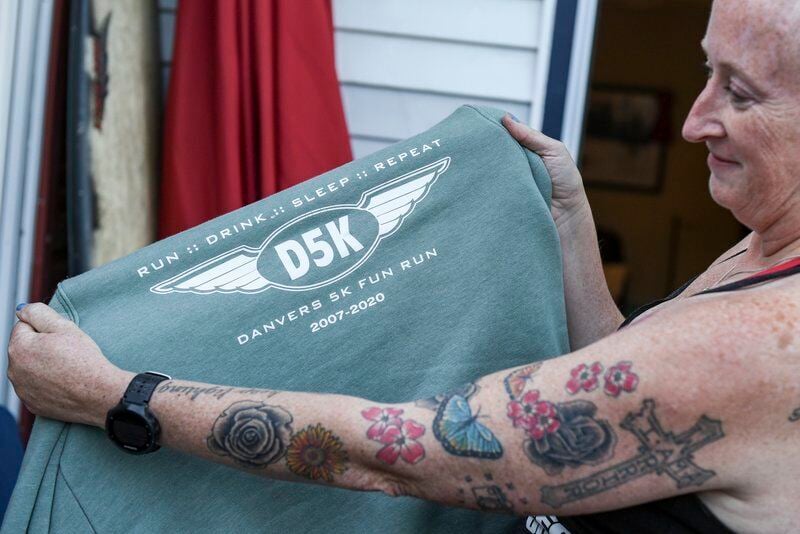 JAIME CAMPOS/Staff photosJeannine Pelkey shows off this year’s commemorative Danvers 5K Fun Run gear. She continued participating in the weekly runs all throughout her treatment for breast cancer. 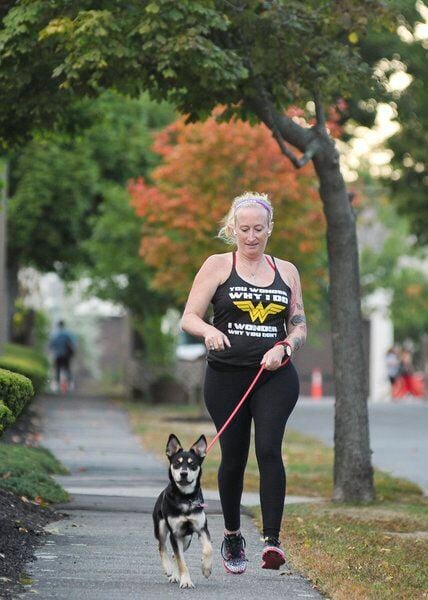 JAIME CAMPOS/Staff photoJeannine Pelkey heads out for a 5K run in Danvers with her dog, Finn. 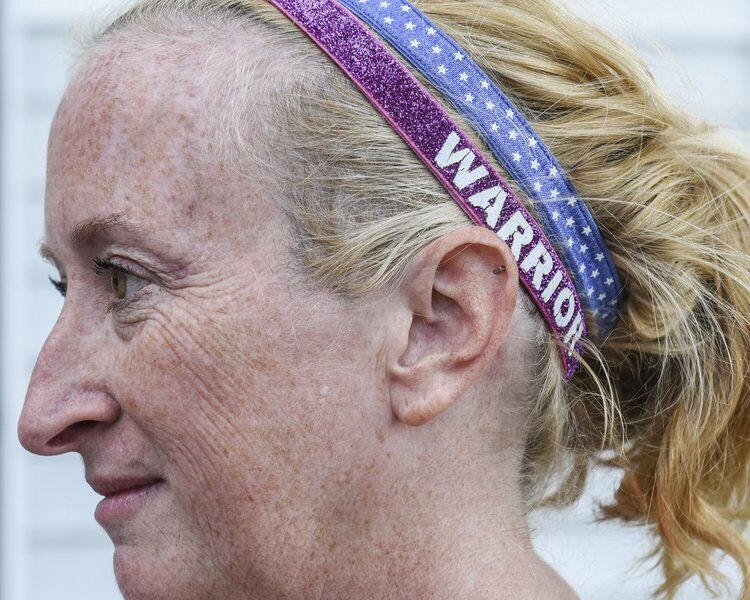 JAIME CAMPOS/Staff photoJeannine Pelkey dons a headband printed with the word “Warrior” as she readies for a 5K run. 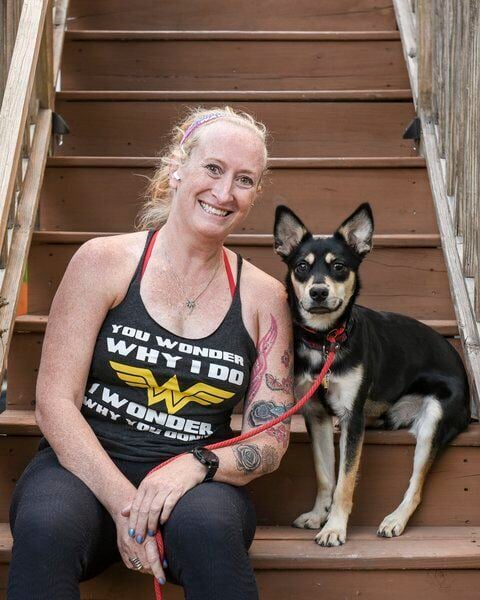 JAIME CAMPOS/Staff photoJeannine Pelkey poses with her dog, Finn, in her Danvers home. 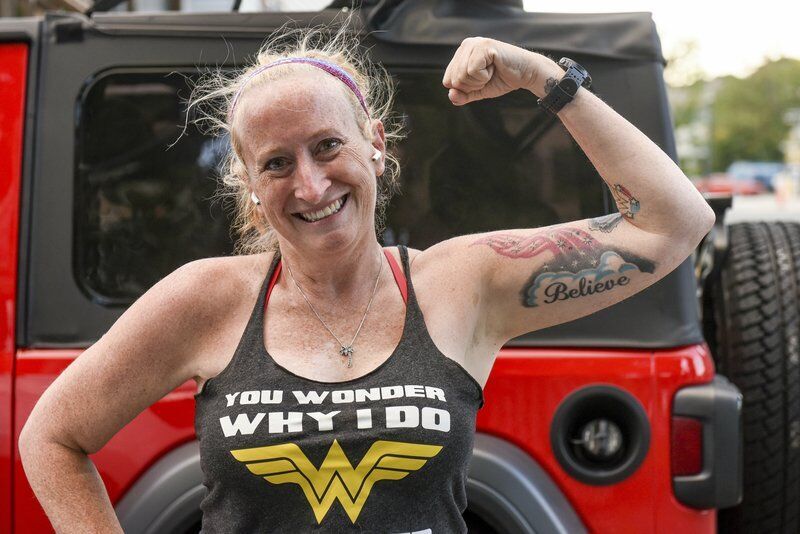 Pelkey flexes to reveal a tattoo on her bicep bearing the word “Believe” breaking through the dark sky and clouds overhead.

Several of Pelkey’s tatoos are inspired by her bout with breast cancer, including the Wonder Woman logo and a visible reminder to “keep fighting.”

JAIME CAMPOS/Staff photosJeannine Pelkey shows off this year’s commemorative Danvers 5K Fun Run gear. She continued participating in the weekly runs all throughout her treatment for breast cancer.

JAIME CAMPOS/Staff photoJeannine Pelkey heads out for a 5K run in Danvers with her dog, Finn.

JAIME CAMPOS/Staff photoJeannine Pelkey dons a headband printed with the word “Warrior” as she readies for a 5K run.

JAIME CAMPOS/Staff photoJeannine Pelkey poses with her dog, Finn, in her Danvers home.

Pelkey flexes to reveal a tattoo on her bicep bearing the word “Believe” breaking through the dark sky and clouds overhead.

Jeannine Pelkey set a goal for herself on Jan. 1, 2016, and she wasn’t going to let cancer prevent her from reaching it.

After developing a love for running and fitness, Pelkey began that new year determined to complete more races than she ever had in a 12-month span.

But then just after Thanksgiving, the Danvers resident received a devastating call. Her routine mammogram revealed a tumor in her right breast.

“It was definitely an awful shock, but all I could think of was ‘just take them, and do it as fast as possible. Get this out of me,’” said Pelkey, who was 44 at the time of her diagnosis.

“So I had a double mastectomy, to take them both. They kept saying they could take a small piece out and reconstruct it, that I’d be all set, but I kept thinking I didn’t want to go through this again in five years, 10 years or 20 years.”

But before undergoing the double mastectomy on Dec. 28, Pelkey made good on her vow for 2016. She completed a total of 36 races for the year — an all-time high. She said the physical challenge of reaching her goal helped her cope with the stress of facing breast cancer.

The double mastectomy was supposed to be the end of Pelkey’s cancer journey. But when doctors conducted a biopsy on the lymph nodes between her right breast and shoulder, they found microscopic cancer cells and recommended she undergo several weeks of chemotherapy and radiation.

At the same time, Pelkey was suffering from a staph infection resulting from one of the breast implants she received. The infection delayed chemotherapy and landed her in the hospital.

Pelkey said going through cancer treatment, including weekly chemo injections, was emotionally and physically exhausting. But she said running and staying fit proved to be her savior.

She remained a regular participant at Danvers’ weekly 5K Fun Runs throughout the chemo and even during radiation treatment in August 2017.

Pelkey said staying active and working out with great friends — many of whom she met through The Emerald Running Club, which she cofounded, and other fitness activities like boxing — helped her push through the fatigue in a way she doesn’t think would otherwise have been possible.

“I would struggle, and I would be walking and then running and then walking again, just trying to get through it,” Pelkey said of the weekly 5Ks.

“I’d come down the street and (friends) were still there, saying, ‘Great job. Keep it up. Keep going. You’re doing great, looking great.’ And I’d say I was so slow that it was awful. They’d say, ‘But you’re here,’ and they’d give me a hug.”

Pelkey still turns out for the weekly 5K runs on Wednesdays at 7 p.m., which, on a nice night, draw dozens of locals. The races are held year-round.

Adam Prentiss, a longtime Danvers resident who has known Pelkey since childhood, greets runners when they arrive and keeps track of everyone’s time on his iPad.

“(Prentiss) and the other guys, they would literally stand there all night if that’s how long it took you,” Pelkey said. “Whether you’re sick or you’re not. They’re just nice about it.”

Pelkey recalled the Wednesday night in August 2017, after she finally finished her cancer treatment, when she showed up to the run to find all the participants wearing wigs to mark the occasion. A celebratory dinner and drinks followed that run.

“I thought it was so great, and really fun,” Pelkey said about the evening, which they dubbed “Wigging Out Night.”

Many of the people who took part in “Wigging Out Night” were the same friends who supported Pelkey while she was going through cancer treatment, she said. Friends would come to her home with meals, money to put toward medical expenses and offers to help around the house, she said.

“I think my group of friends that I work out with really came through for me,” she said. “They would show up at the house and say, even when I was in my weakest state, ‘We’re just going to walk down the driveway and back up’ or ‘We’re going to walk around the block.’ It was really great.”

It’s been almost four years since Pelkey was diagnosed with breast cancer. She said the experience now inspires her to help others impacted by the disease.

In addition to raising funds to support the efforts of the American Cancer Society through its Making Strides Against Breast Cancer walk and the group Barbells for Boobs, which assists patients through fitness and other programs, Pelkey said she also makes sure to remind her friends, both male and female, to get their regular mammograms.

“You never would have felt mine if I didn’t get the mammogram,” Pelkey said of her lump. “It was so in the back, more against my chest, deep in there. You couldn’t have felt it. So if I hadn’t gone, I don’t know what would have happened.”

She emphasized the fact that breast cancer can impact anyone.

“I don’t have the breast cancer gene,” she said. “I don’t know where my cancer came from. It’s not in my family. I eat really healthy.”

For those who find themselves facing a diagnosis like she did, Pelkey offers plenty of encouragement.

“You have to do what the doctors say, no matter what,” she said, “but you also can sit home and put your head under the covers and cry about it forever, or you can get up and fight back and push as hard as you can to get to where you want to be physically and emotionally.”

“I didn’t feel great every day, but I got up and kept pushing no matter what,” she added. “I feel like I did it and so can someone else.”