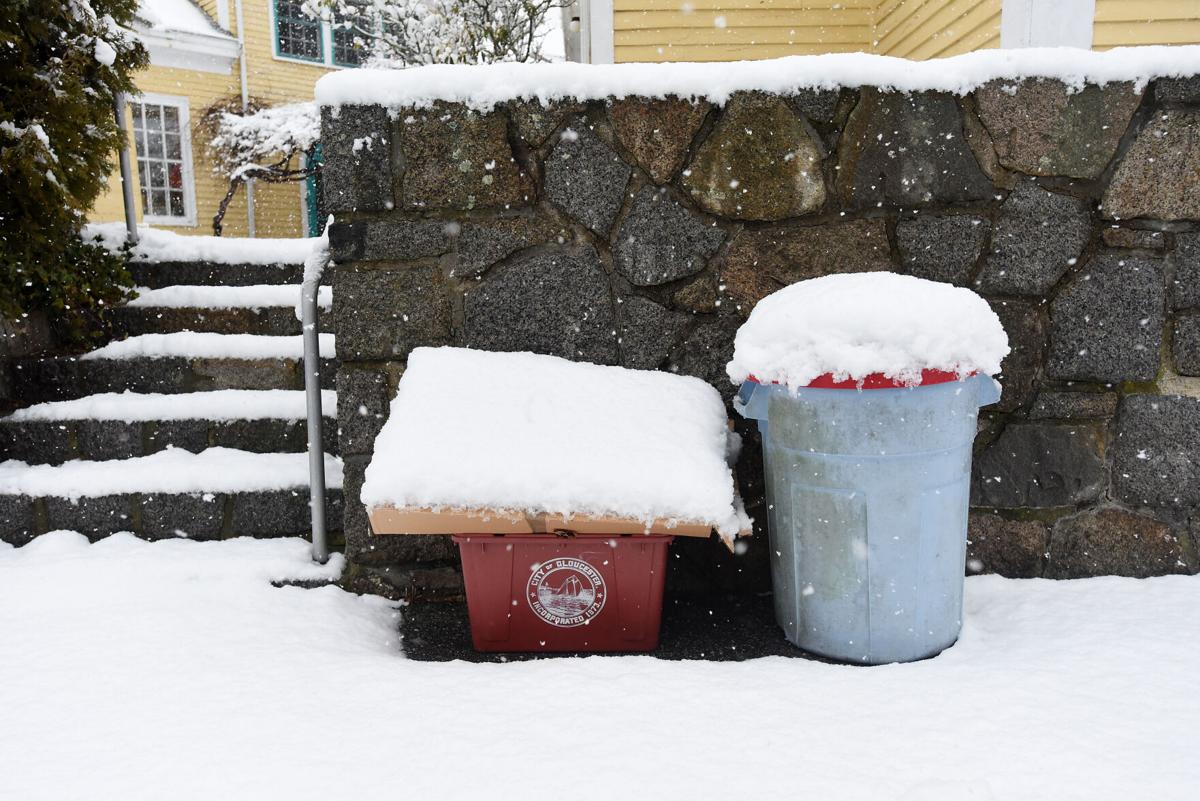 Trash sits on the sidewalk on Rocky Neck during Cape Ann’s first significant snowfall of the year on Friday. Trash pickup on Friday was postponed until Saturday, but JRM did not finish the recycling route, which it is expected to finish Monday. 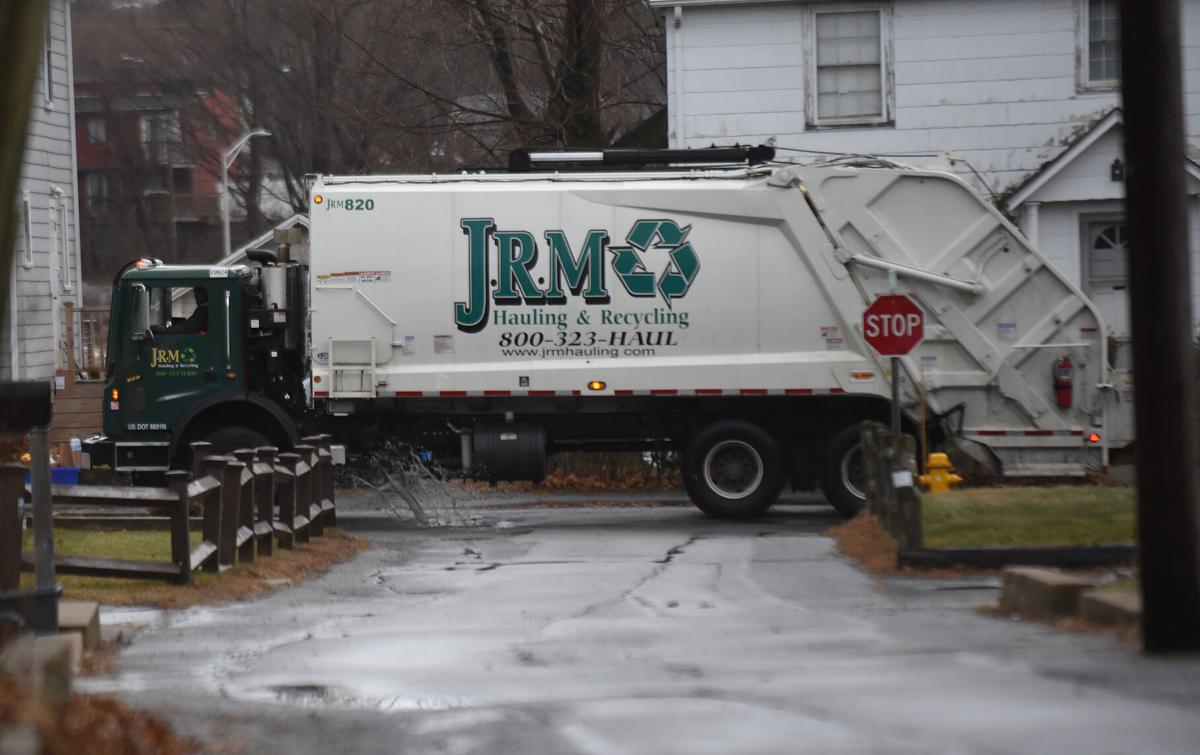 A JRM Hauling and Recycling truck makes its way down Gloucester Avenue on Wednesday as the company, which is experiencing staffing shortages due to COVID-19, scrambles to pickup recycling. 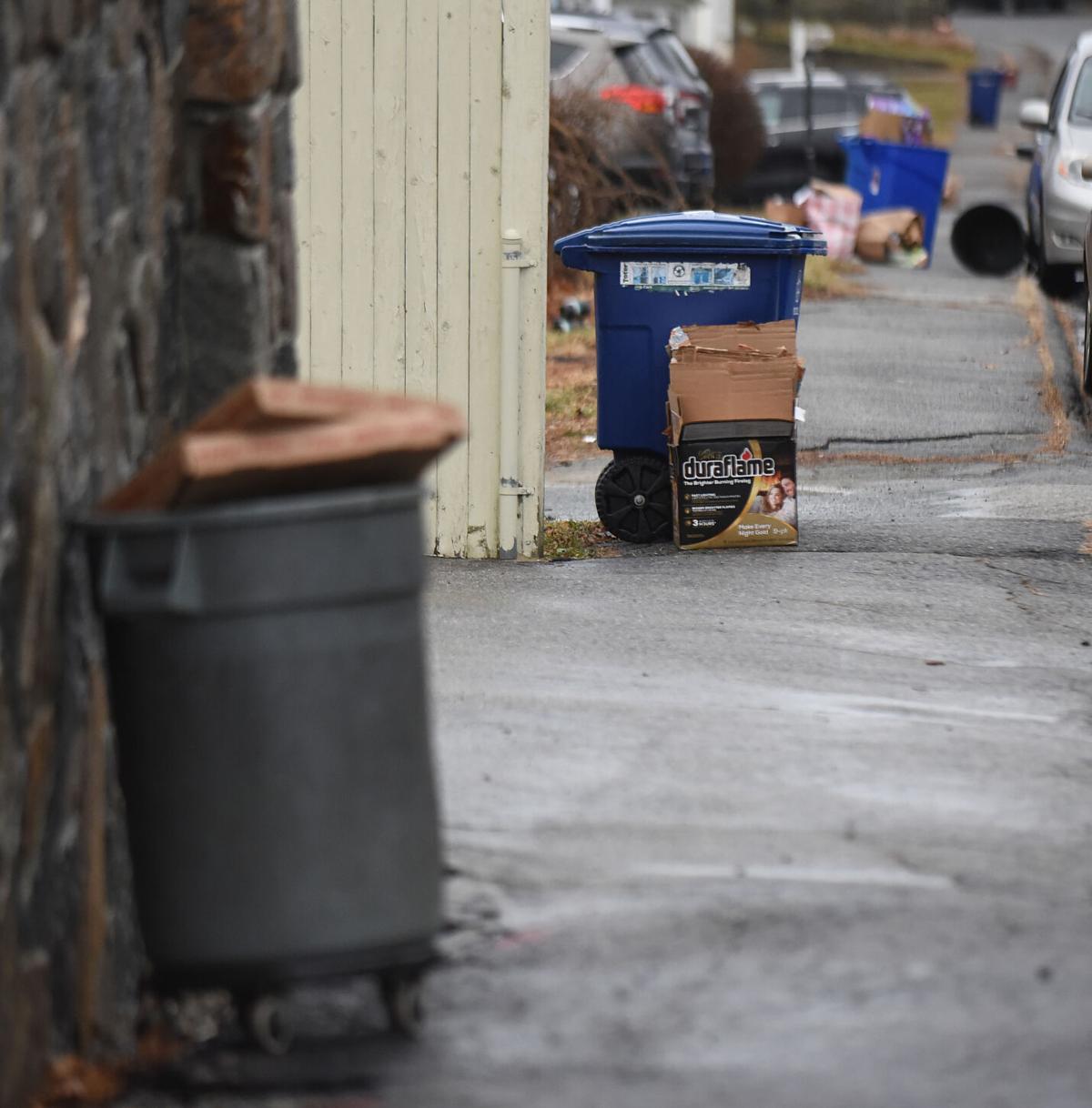 Recycling waits on the curb on Whittemore Street to be picked up Wednesday by JRM Hauling and Recycling, which is experiencing staffing shortages due to COVID-19.

Trash sits on the sidewalk on Rocky Neck during Cape Ann’s first significant snowfall of the year on Friday. Trash pickup on Friday was postponed until Saturday, but JRM did not finish the recycling route, which it is expected to finish Monday.

A JRM Hauling and Recycling truck makes its way down Gloucester Avenue on Wednesday as the company, which is experiencing staffing shortages due to COVID-19, scrambles to pickup recycling.

Recycling waits on the curb on Whittemore Street to be picked up Wednesday by JRM Hauling and Recycling, which is experiencing staffing shortages due to COVID-19.

Trash pickup in Gloucester and several communities is being delayed because a high number of workers are out sick with COVID-19.

JRM Hauling & Recycling, which collects trash and recycling for Gloucester, Manchester and multiple North Shore communities, posted a message online saying the company is facing “significant service delays” due to employees with COVID-19 being out on sick leave.

“JRM is doing everything possible to get service to our communities and we ask for patience as we get through the next few weeks,” said the message signed by the company’s Jimmy Motzkin. JRM, which is based in Peabody, did not return messages seeking comment.

Gloucester is seeing a small effect from the staffing shortage that JRM is going through, said Public Works Trash and Recycling Coordinator Mark Cole.

“We are in communication with their management team on a daily basis to get updates on how the routes are progressing for that day,” Cole said. “There have been several days where they have not finished either the trash or recycle route but they let us know so we can post the information on our social media accounts.”

Trash and recycling pickup was canceled because of Friday’s snowstorm, and JRM followed the Friday route on Saturday instead, but did not finish the recycling route. As posted on Gloucester Public Works’ Facebook and Twitter accounts, those pickups will be added to Monday’s route. Also, Christmas trees will be picked up with trash this week.

“The message we would like to get out,” said Cole, “is that if your trash or recycling or both are not picked up and you see that the rest of the houses in your area were missed as well then check our social media outlets (Facebook, Twitter, Instagram) for an update. Most likely your neighborhood was part of a route that was not completed and will be picked up the next day. You can call JRM at 800-323-4285 to report the missed pickup.”

Beverly Mayor Mike Cahill said trash and recycling is being picked up about a half-day late in his city due to the JRM worker shortage, and Christmas tree pickup has been postponed until this week.

Cahill, who has sent robocall messages to residents about the problem, said there have not been a lot of complaints.

“People have been great,” he said. “I think the communication has helped. Everybody is dealing with the same thing with the omicron spread.”

“They have to shift their labor force around based on who’s healthy and who’s not,” he said. “We’ve had some calls from people wondering what’s going on. We’re just wishing for a little extra patience and understanding right now.”

Manchester Town Administrator Greg Federspiel said he has not received any complaints regarding delays from JRM. The company was hired by the town to pick up its trash in July. Federspiel said the transition was smooth and JRM has done a great job so far.

Salem, which uses the trash hauler Waste Management, has had no more delays or missed collections than average, according to Dominick Pangallo, the mayor’s chief of staff.

Delays in trash collections are not unique to Cape Ann and the North Shore. Steve Changaris, the Northeast regional vice president for the National Waste & Recycling Association, said the industry, like many others, is struggling with a worker shortage that has been exacerbated by the omicron surge of the virus.

“When we went through the first wave of COVID, we really sort of got away with one,” Changaris said. “This second round has been more problematic for everybody because the omicron variant is much more contagious.”

Changaris noted that the impacts of the pandemic are coming on top of an existing truck driver shortage. There are also longer lines for trucks at transfer stations, meaning longer waits and less time on the road.

“We’re in a pinch with a lot of different variables,” he said. “We’re doing our best. Haulers are pulling out all the stops. We’ll get through it.”

Staff writer Andrea Holbrook contributed to this report by Paul Leighton, who can be reached at 978-338-2535 or pleighton@salemnews.com, or on Twitter at @heardinbeverly.