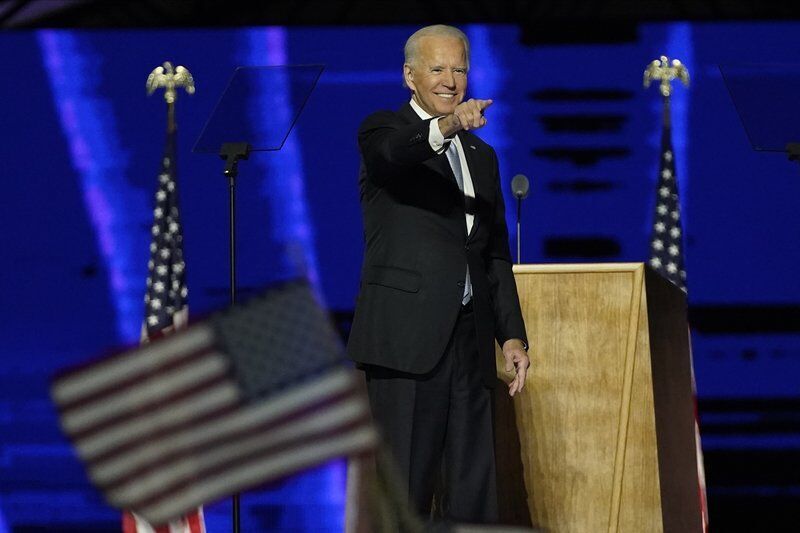 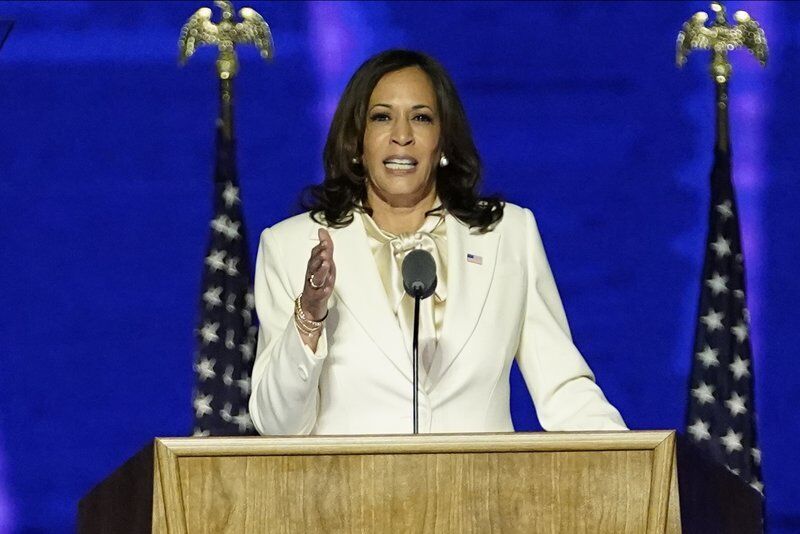 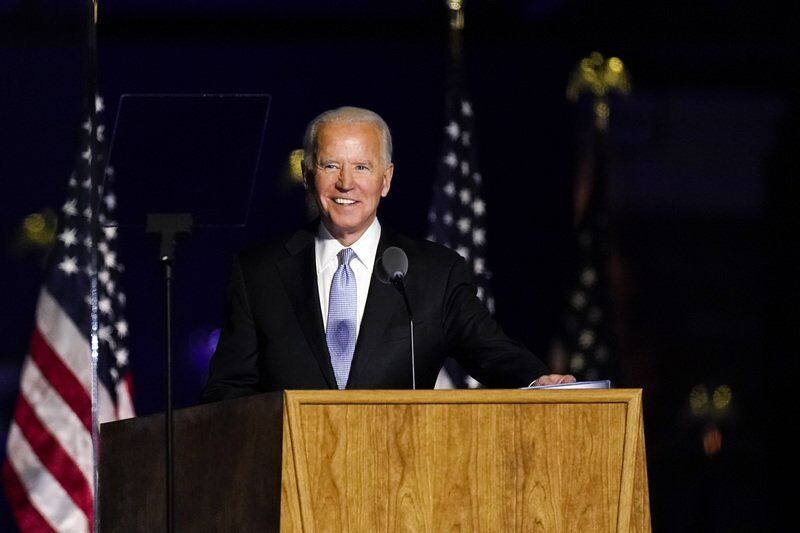 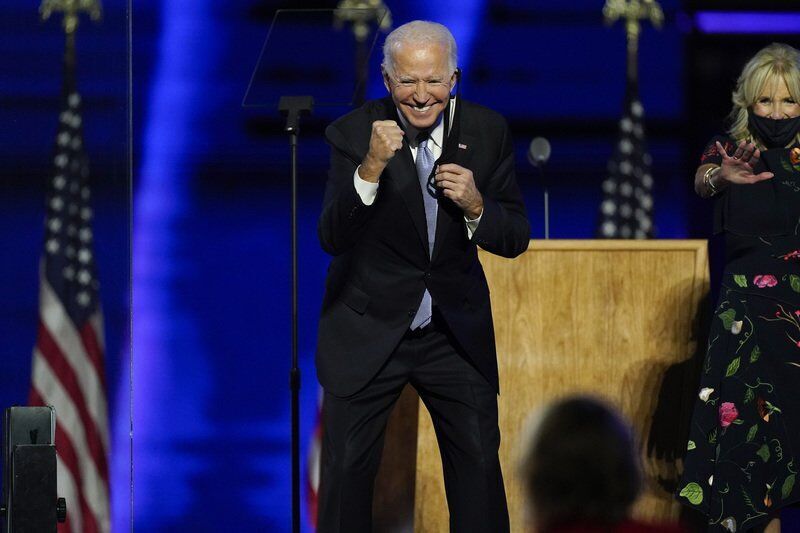 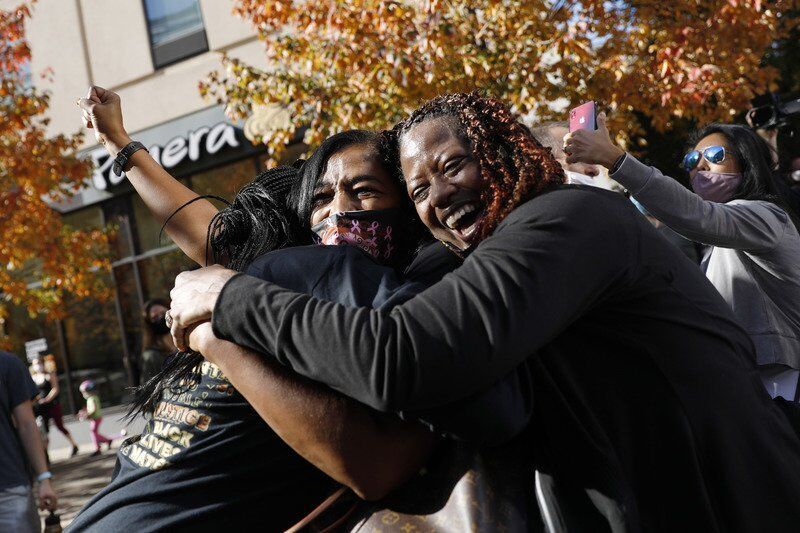 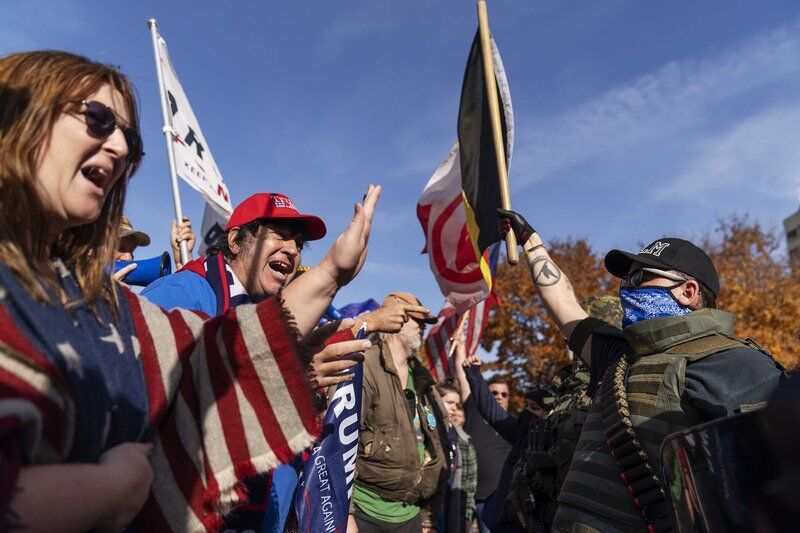 Trump supporters, at left, demonstrating the election results are confronted by counter protesters at the State Capitol in Lansing, Mich., Saturday, Nov. 7, 2020. Democrat Joe Biden defeated President Donald Trump to become the 46th president of the United States on Saturday, positioning himself to lead a nation gripped by the historic pandemic and a confluence of economic and social turmoil.(AP Photo/David Goldman) 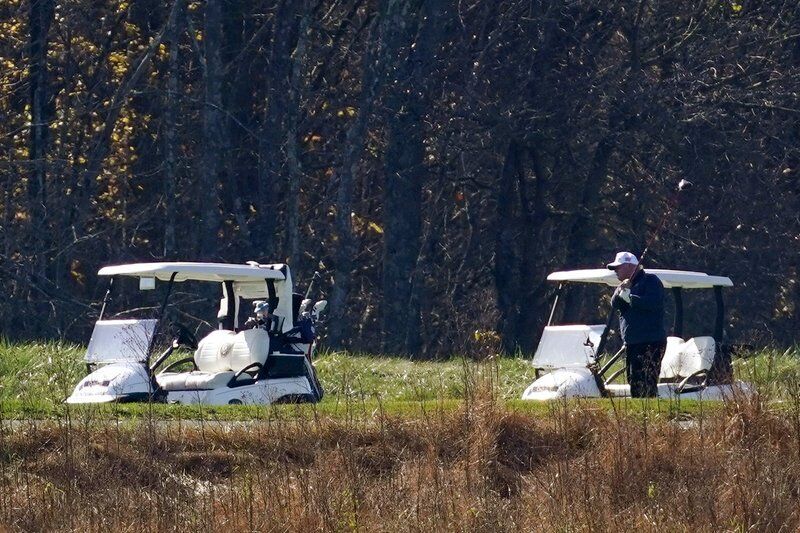 President Donald Trump participates in a round of golf at the Trump National Golf Course on Saturday, Nov. 7, 2020, in Sterling, Va. (AP Photo/Patrick Semansky) 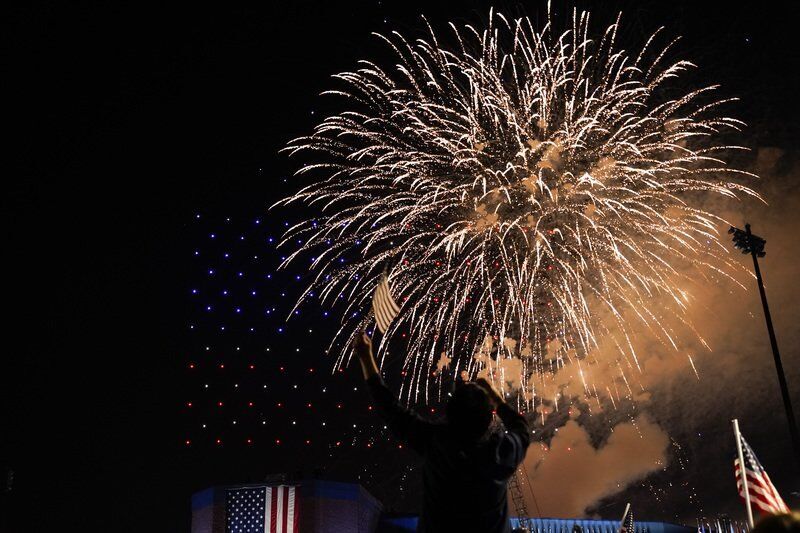 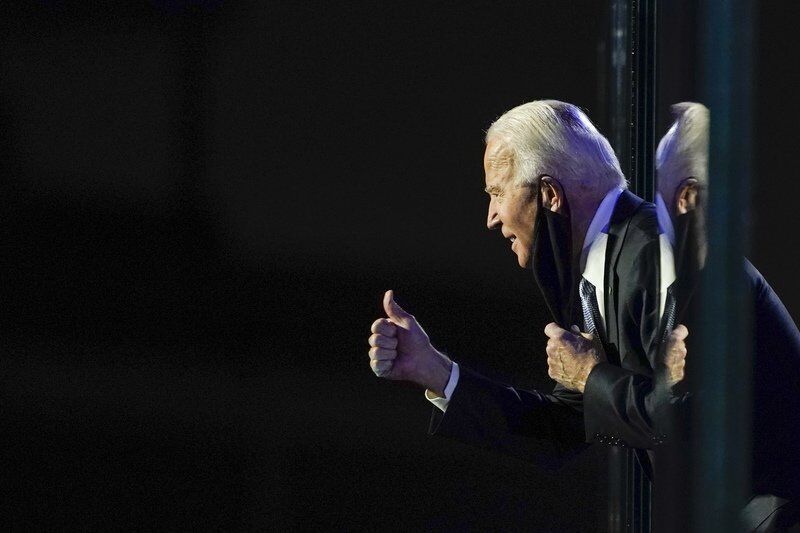 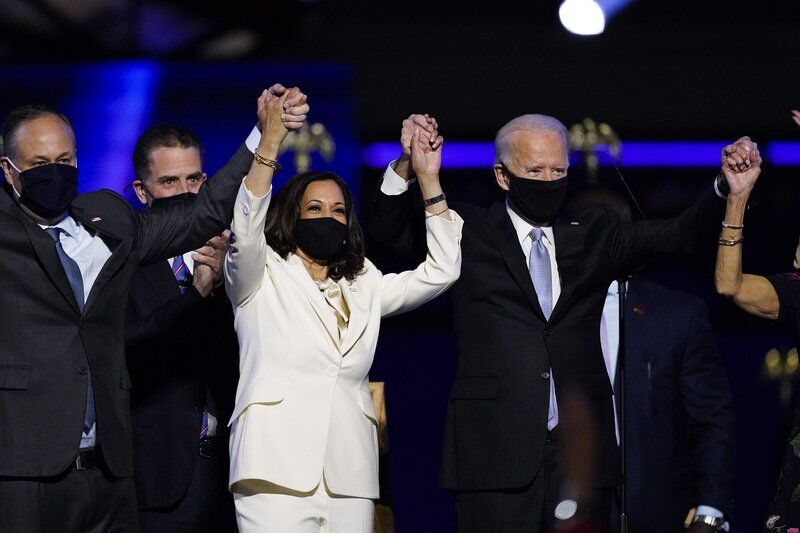 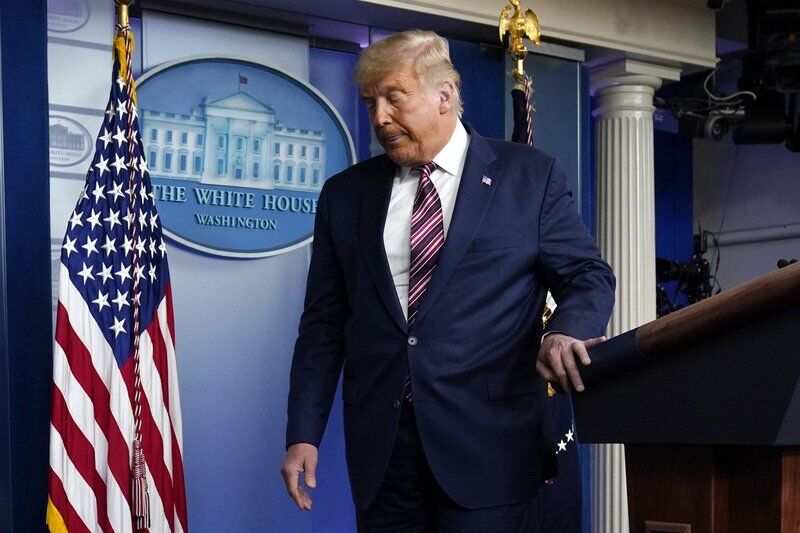 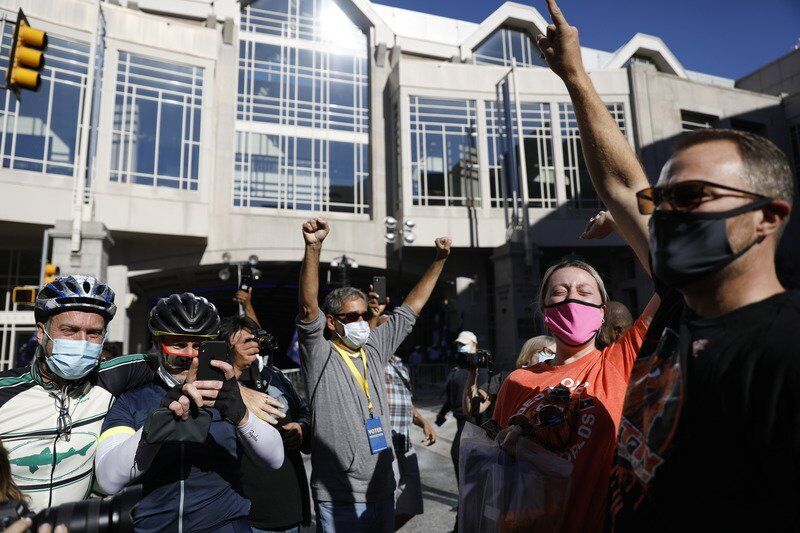 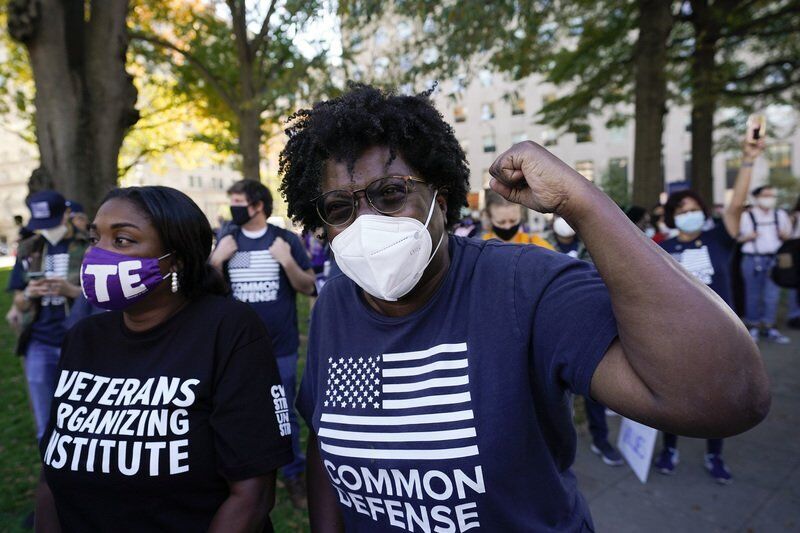 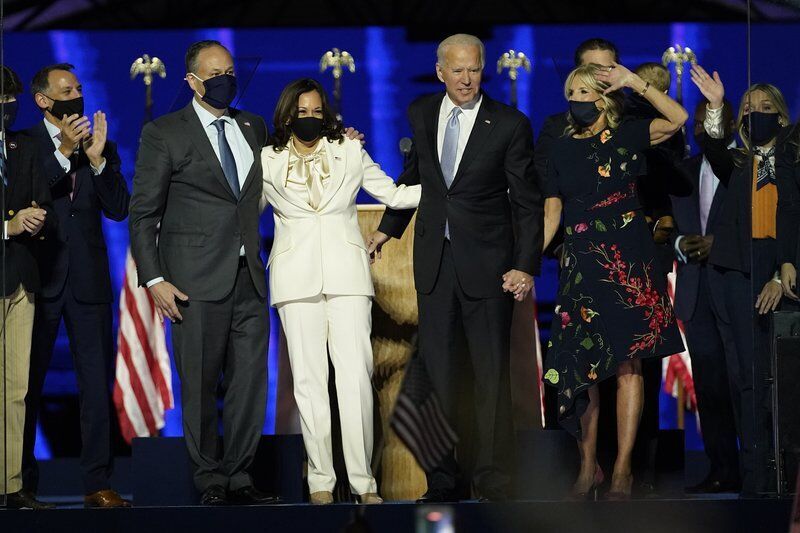 Trump supporters, at left, demonstrating the election results are confronted by counter protesters at the State Capitol in Lansing, Mich., Saturday, Nov. 7, 2020. Democrat Joe Biden defeated President Donald Trump to become the 46th president of the United States on Saturday, positioning himself to lead a nation gripped by the historic pandemic and a confluence of economic and social turmoil.(AP Photo/David Goldman)

President Donald Trump participates in a round of golf at the Trump National Golf Course on Saturday, Nov. 7, 2020, in Sterling, Va. (AP Photo/Patrick Semansky)

WASHINGTON (AP) — Democrat Joe Biden defeated President Donald Trump to become the 46th president of the United States on Saturday and offered himself to the nation as a leader who “seeks not to divide, but to unify" a country gripped by a historic pandemic and a confluence of economic and social turmoil.

“I sought this office to restore the soul of America,” Biden said in a prime-time victory speech not far from his Delaware home, “and to make America respected around the world again and to unite us here at home."

Biden crossed the winning threshold of 270 Electoral College votes with a win in Pennsylvania. His victory came after more than three days of uncertainty as election officials sorted through a surge of mail-in votes that delayed processing.

Trump refused to concede, threatening further legal action on ballot counting. But Biden used his acceptance speech as an olive branch to those who did not vote for him, telling Trump voters that he understood their disappointment but adding, “Let’s give each other a chance.”

Biden, 77, staked his candidacy less on any distinctive political ideology than on galvanizing a broad coalition of voters around the notion that Trump posed an existential threat to American democracy. The strategy, as well as an appeal to Americans fatigued by Trump's disruptions and wanting a return to a more traditional presidency, proved effective and resulted in pivotal victories in Michigan and Wisconsin as well as Pennsylvania, onetime Democratic bastions that had flipped to Trump in 2016.

Biden's victory was a repudiation of Trump’s divisive leadership and the president-elect now inherits a deeply polarized nation grappling with foundational questions of racial justice and economic fairness while in the grips of a virus that has killed more than 236,000 Americans and reshaped the norms of everyday life.

Kamala Harris made history as the first Black woman to become vice president, an achievement that comes as the U.S. faces a reckoning on racial justice. The California senator, who is also the first person of South Asian descent elected to the vice presidency, will become the highest-ranking woman ever to serve in government, four years after Trump defeated Hillary Clinton.

Harris introduced Biden at their evening victory celebration as “a president for all Americans” who would look to bridge a nation riven with partisanship and she nodded to the historic nature of her ascension to the vice presidency.

“Dream with ambition, lead with conviction and see yourselves in a way that others may not simply because they’ve never seen it before," Harris told Americans. “You chose hope and unity, decency, science and, yes, truth ... you ushered in a new day for America.”

After he spoke, the cars at the drive-in rally — a pandemic campaign invention — began to honk their horns and a fireworks display lit up the night sky. Biden was on track to win the national popular vote by more than 4 million, a margin that could grow as ballots continue to be counted.

Nonetheless, Trump was not giving up.

Departing from longstanding democratic tradition and signaling a potentially turbulent transfer of power, he issued a combative statement saying his campaign would take unspecified legal actions. And he followed up with a bombastic, all-caps tweet in which he falsely declared, “I WON THE ELECTION, GOT 71,000,000 LEGAL VOTES.” Twitter immediately flagged it as misleading.

Trump has pointed to delays in processing the vote in some states to allege with no evidence that there was fraud and to argue that his rival was trying to seize power — an extraordinary charge by a sitting president trying to sow doubt about a bedrock democratic process.

Trump is the first incumbent president to lose reelection since Republican George H.W. Bush in 1992.

He was golfing at his Virginia country club when he lost the race. He stayed out for hours, stopping to congratulate a bride as he left, and his motorcade returned to the White House to a cacophony of shouts, taunts and unfriendly hand gestures.

In Wilmington, Delaware, near the stage that, until Saturday night, had stood empty since it was erected to celebrate on Election Night, people cheered and pumped their fists as the news that the presidential race had been called for the state’s former senator arrived on their cellphones.

On the nearby water, two men in a kayak yelled to a couple paddling by in the opposite direction, “Joe won! They called it!” as people on the shore whooped and hollered. Harris, in workout gear, was shown on video speaking to Biden on the phone, exuberantly telling the president-elect “We did it!”

Across the country, there were parties and prayer. In New York City, spontaneous block parties broke out. People ran out of their buildings, banging on pots. They danced and high-fived with strangers amid honking horns. Among the loudest cheers were those for passing U.S. Postal Service trucks.

People streamed into Black Lives Matter Plaza near the White House, near where Trump had ordered the clearing of protesters in June, waving signs and taking cellphone pictures. In Lansing, Michigan, Trump supporters and Black Lives Matter demonstrators filled the Capitol steps. The lyrics to “Amazing Grace” began to echo through the crowd, and Trump supporters laid their hands on a counter protester, and prayed.

Americans showed deep interest in the presidential race. A record 103 million voted early this year, opting to avoid waiting in long lines at polling locations during a pandemic. With counting continuing in some states, Biden had already received more than 75 million votes, more than any presidential candidate before him.

Trump’s refusal to concede has no legal implications. But it could add to the incoming administration’s challenge of bringing the country together after a bitter election.

Throughout the campaign, Trump repeatedly refused to commit to a peaceful transfer of power, arguing without evidence that the election could be marred by fraud. The nation has a long history of presidential candidates peacefully accepting the outcome of elections, dating back to 1800, when John Adams conceded to his rival Thomas Jefferson.

It was Biden's native Pennsylvania that put him over the top, the state he invoked throughout the campaign to connect with working class voters. He also won Nevada on Saturday pushing his total to 290 Electoral College votes.