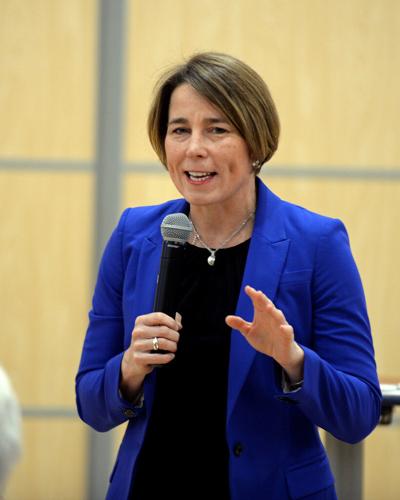 BOSTON — Fresh off Tuesday’s primary wins, Democrat Maura Healey and Republican Geoff Diehl have returned to the campaign trail as they make their case to voters to be the state’s next governor.

Healey, the state’s attorney general, easily secured the Democratic Party’s nomination to run for governor after facing no opposition in Tuesday’s primary.

As the race to the Nov. 8 election gets underway, the contrast between the two veteran politicians vying to succeed outgoing Republican Gov. Charlie Baker couldn’t be more stark.

By contrast, Healey would be the first woman — and the first openly gay candidate — to be elected Massachusetts governor if she wins in November. She and her newly anointed running-mate, Salem Mayor Kim Driscoll, are pledging to uphold the state’s abortion laws, and expand clean energy and civil rights protections.

On Thursday, Healey and Driscoll were back on the campaign trail making appearances in Plymouth, Fall River and New Bedford where they talked about their plans for economic development, lowering costs and expanding the state’s reliance on renewable energy.

Driscoll said the duo want to develop offshore wind, expand vocational education and training in the trades and make the state “a more affordable place to live.”

“At a time when the cost of living has risen and too many working families are struggling to make ends meet, we need leadership that knows how to cut costs and deliver for people,” Driscoll said during a campaign stop. “As members of the get-stuff-done wing of government, we are ready to deliver on day one.”

On Friday, Healey and Driscoll visited a Springfield rail station where they talked with representatives from the region, including U.S. Rep. Rich Neal, about their plans for transportation.

Diehl and Allen were also back on the campaign trail with planned visits to events at a Worcester church, the Franklin County Fair, a veterans golf tournament in Plymouth, and a MassGOP veterans fundraiser in Andover, according to the campaign.

“With this campaign, we are going to be redefining politics as usual here in Massachusetts,” Diehl said at a rally following his primary win. “For the first time in our state’s history, we are going to run a campaign that is focused specifically on we the people — our freedoms, our rights, and our prosperity.”

While Trump won’t be on the Massachusetts ballot in November, his presence will be felt in the wide-open race for governor.

Diehl, a former state lawmaker who ran unsuccessfully against U.S. Sen. Elizabeth Warren in the 2018 election, has embraced many of Trump’s positions on illegal immigration, abortion and get-tough-on-crime approach to policing and has echoed his unfounded claims that the 2020 presidential election was stolen.

During a pre-primary “tele-rally” last Monday, Trump called Diehl the “only conservative in the race” and said he would be “tough on crime, strong on borders and will always stand up for parents’ rights” and govern the state “with an iron fist” if elected.

Healey, an attorney who took over as AG in 2015, positioned herself as the leading voice of opposition in the state during the Trump administration. Her office filed dozens of lawsuits over Trump’s efforts to deport immigrants, roll back clean energy targets and environmental regulations, and repeal the Affordable Care Act.

Her campaign has sought to emphasize Diehl’s ties to Trump in a deep-blue state where the former president is unpopular among Democrats and independents.

“Geoff Diehl wants to bring Trumpism to Massachusetts. He has embraced the Trump playbook of anger and extremism, and he opposes a woman’s right to abortion access and reproductive health care,” Healey’s campaign manager Jason Burrell said in a statement. “Massachusetts cannot afford the extremism of Geoff Diehl.”

A new poll conducted by Emerson College shows Healey with a comfortable lead over Diehl among likely Massachusetts voters in the general election.

The survey, released Friday, found 52% of voters preferred Healey to Diehl’s 34%, with 12% of voters still undecided, and two months to go until Election Day.

Healey also has a significant cash advantage over Diehl heading into the final sprint of the gubernatorial race. As of Aug. 31, Diehl had about $17,000 left in his campaign kitty, compared to Healey’s $4.7 million, according to filings with the Massachusetts Office of Campaign and Public Finance.

Christian M. Wade covers the Massachusetts Statehouse for North of Boston Media Group’s newspapers and websites. Email him at cwade@cnhinews.com.