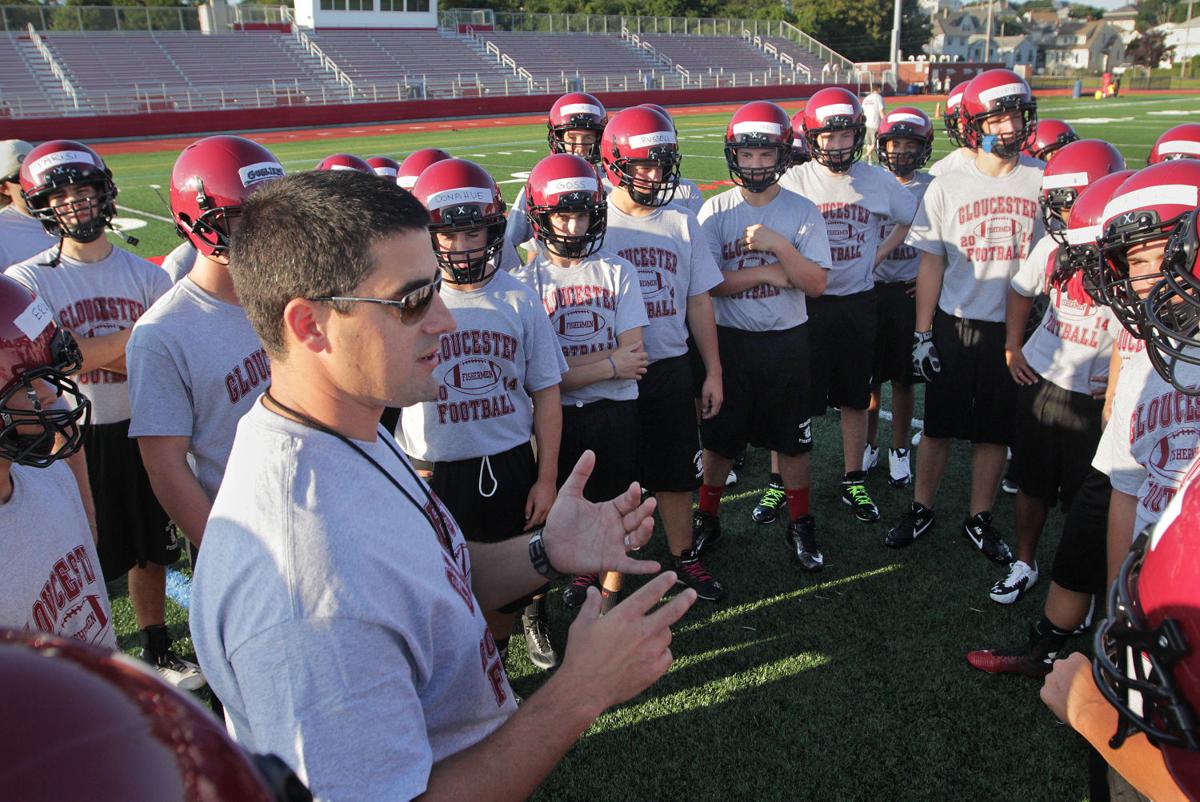 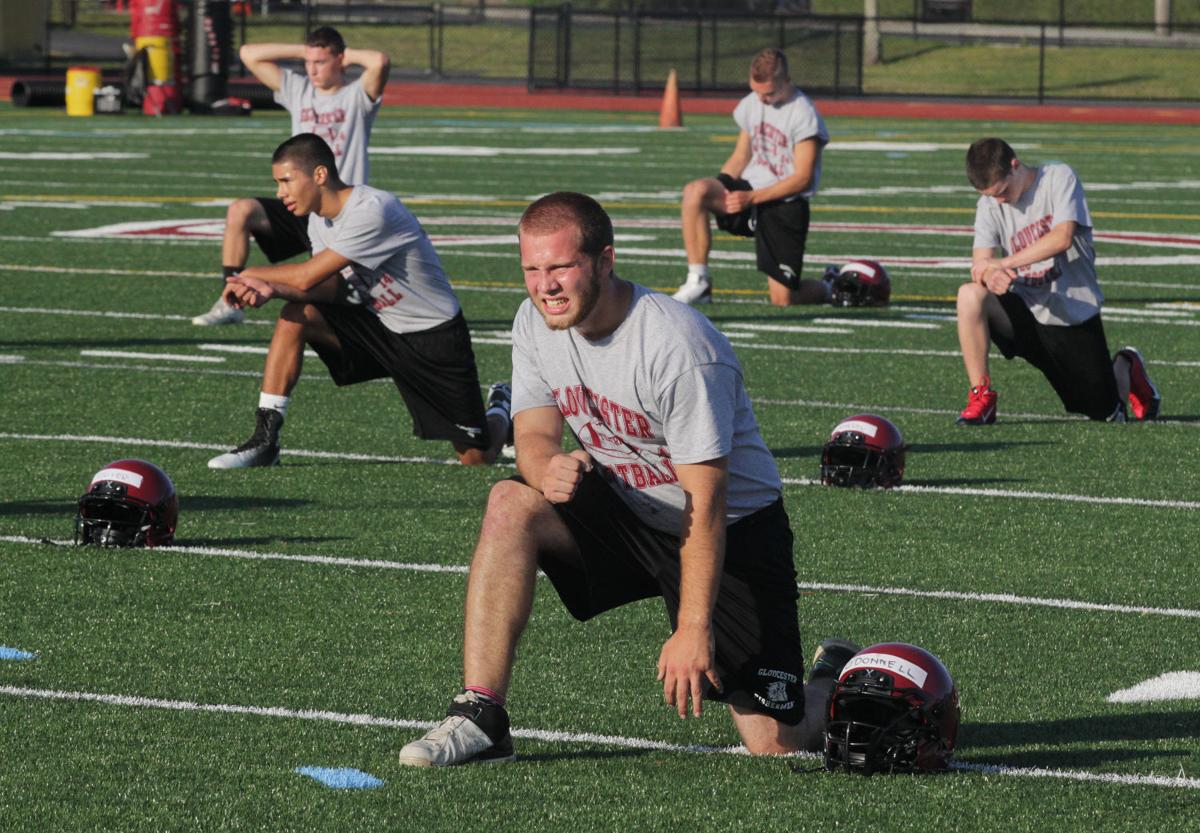 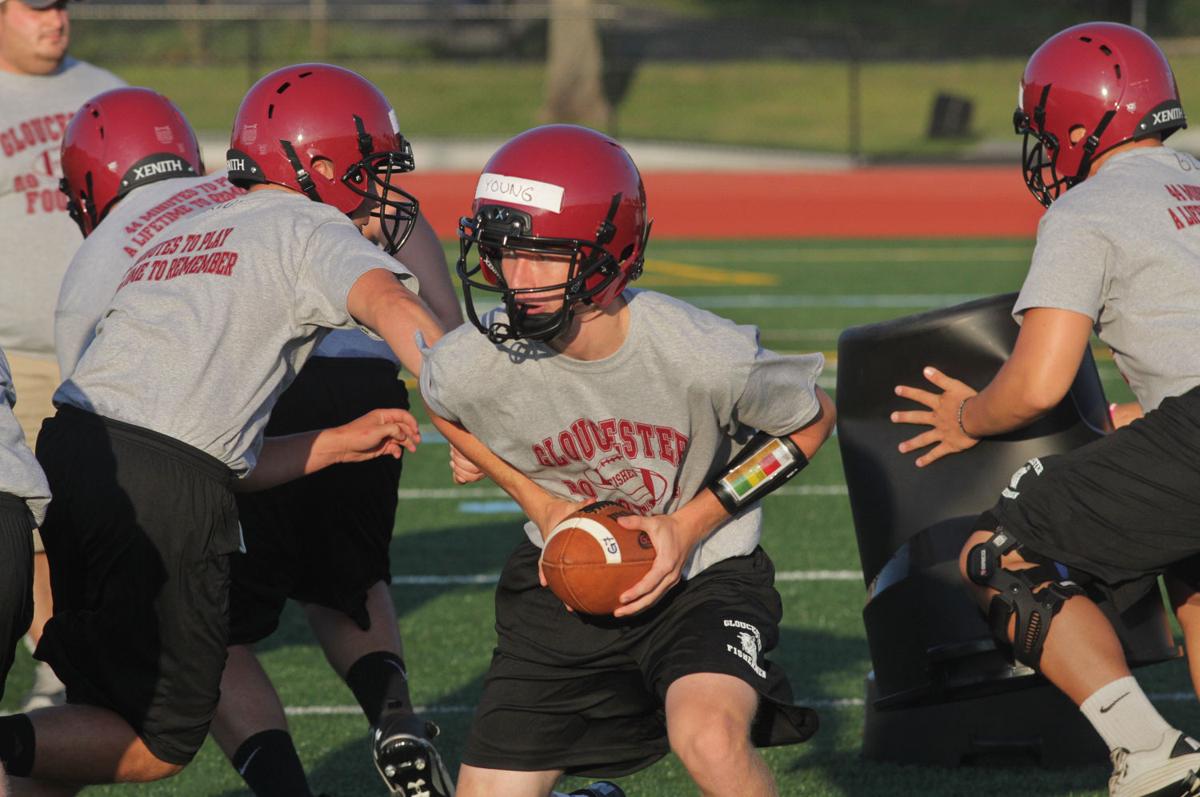 Sophomore quarterback Nate Young carries the ball during a drill on the first day of varsity football practice Monday at Gloucester High School.

Sophomore quarterback Nate Young carries the ball during a drill on the first day of varsity football practice Monday at Gloucester High School.

GLOUCESTER-- The wait is finally over.

Since last Thanksgiving, the Gloucester football players have been preparing for the 2014 season with tireless work in the weight room, on the track, and at the beach summer mornings for offseason conditioning workouts.

But it was back to the field on Monday and Tuesday for the Fishermen as the first days of mini-camp broke. Gloucester players came into mini-camp with a sense of excitement and also a sense of hunger to build off of last year’s performance where the team won a share of the Northeastern Conference Large Division and qualified for the Division 3 Northeast semifinals taking eventual Super Bowl champ Tewksbury to the wire.

“It feels good to be back on the field,” Fishermen senior captain John Salvi-Souza said. “We graduated a lot of seniors from last year but there’s still a lot of experience on the field. A lot of us seniors saw the field last year and we are looking to play just as hard if not harder than the seniors that left last year.”

The Fishermen will partake in one last mini-camp session tomorrow before putting the pads on for the first time Thursday, which is the first day of double-sessions.

“The kids put in so much hard work during the offseason and it’s nice for them to finally be on the field to do something about it,” said head coach Tony Zerilli, the reigning NEC Large coach of the year who is entering his fourth season at the helm. “A lot of them have a lot to prove. We graduated a big senior class, now it’s up to this year’s seniors to carry on the legacy. And that’s what Gloucester football is all about, carrying on that legacy each year.”

Because they aren’t practicing in pads, the Fishermen open up the season with a focus on conditioning and the mental side of the game. Gloucester has also been focusing on its offense early in the season as it will be breaking in nine new starters on that side of the ball.

“We are breaking in a lot of new players on offense so we are really trying to get the offense clicking early,” Salvi-Souza said. “We are really working on our plays and our schemes. We will be ready to go by the time we have our first scrimmage.”

On Monday, the team opened up practice with conditioning tests including a shuttle run and the 40 yard dash before working on some offensive plays. On Tuesday, the mini-camp blue print was similar as conditioning was a main focus along with the fundamentals.

Players were split up by offensive position to practice their footwork, speed and agility.

“When you don’t have pads on, there’s only so much football you can do,” Zerilli said. “During mini-camp we are looking to get the kids back into football shape and we focus more on the mental game. If you are already in shape mini-camp can be fun, but if not it can be rough with all the conditioning drills and it’s going to take you longer to get into football shape if you didn’t work out in the offseason.”

The Fishermen are preparing for their first scrimmage of the year, which will take place one week from today in a four-team scrimmage at Chelmsford, where Zerilli and company will get to see the players in action against three different offensive and defensive schemes. Next Saturday, Gloucester will have its final scrimmage of the preseason against Peabody before opening up the season on September 5 at Lynn Classical (7 p.m.).

Gloucester may have some new players entering the starting lineup this spring, but the players and coaches are still optimistic that this group is strong enough mentally and physically to be a contender again this fall.

“On defense, we are looking strong because the majority of our defensive starters were juniors last year,” Zerilli said. “Offensively we are athletic. We may not be the biggest team out there but we’re athletic and those type of players work well in this offense. The kids came out excited and ready to play and that’s a good sign moving forward.”