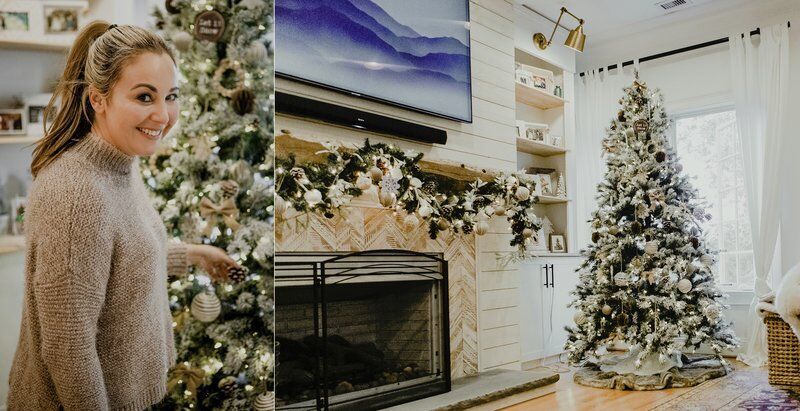 Lindsey Catarino poses in front of her decorated Christmas tree — which she put up, lights and all, in mid-September — in her condo in West Hartford, Connecticut. (Kate Tortland Fine Art via AP) 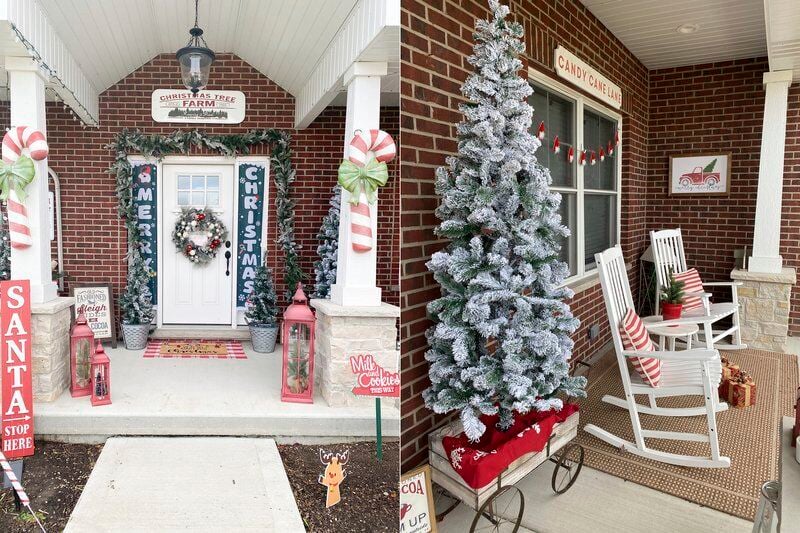 Danielle Martin, of Manteno, Illinois, usually waits to decorate until the day after Thanksgiving, but this year, she got busy on Nov. 1 creating this candy cane-themed front porch. (Danielle Martin via AP) 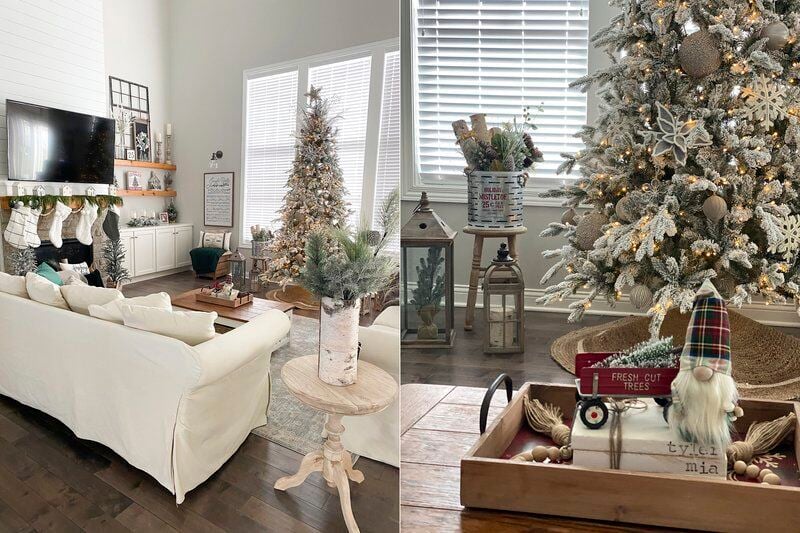 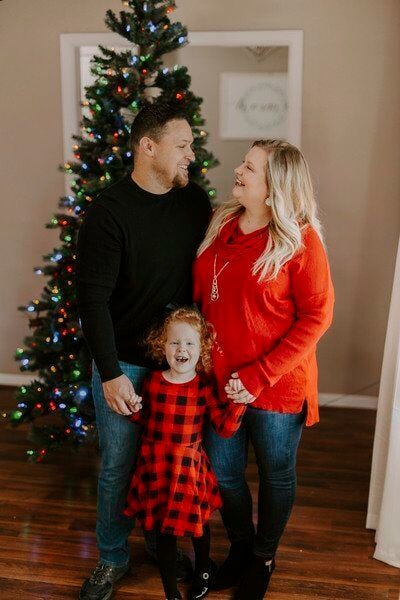 Nick Jones, left, poses with his wife, Mindy, and their daughter, Gracelyn, in front of one of their decorated Christmas trees at their home in Louisville, Kentucky. The family is among a growing number of people who have gone full-on Christmas weeks early. (Jade Ware via AP)

Lindsey Catarino poses in front of her decorated Christmas tree — which she put up, lights and all, in mid-September — in her condo in West Hartford, Connecticut. (Kate Tortland Fine Art via AP)

Danielle Martin, of Manteno, Illinois, usually waits to decorate until the day after Thanksgiving, but this year, she got busy on Nov. 1 creating this candy cane-themed front porch. (Danielle Martin via AP)

Nick Jones, left, poses with his wife, Mindy, and their daughter, Gracelyn, in front of one of their decorated Christmas trees at their home in Louisville, Kentucky. The family is among a growing number of people who have gone full-on Christmas weeks early. (Jade Ware via AP)

Lindsey Catarino is the talk of her neighborhood. She put up her Christmas tree, lights and all, in mid-September. By Oct. 1, her mantel was decorated. Since, she has added more trees and decorations in just about every room of her Connecticut condo.

The goal for the 42-year-old Catarino, like other newly minted early birds, is to bring on the warmth and comfort of Christmas by beating back “an otherwise insane world.”

As some holiday tree sellers fear they'll sell out by Thanksgiving and parcel shipping companies worry about November gridlock, a growing number of people on a quest for joy have bucked tradition and gone full-on Christmas weeks earlier than they normally would.

“It has definitely overtaken me, and very early,” said Catarino, who lives in West Hartford. “I enjoy being home in a different way. It just gives me a chance to be busy on something that's happy. I wanted my house to bring me that peace, and we just want to tune out. The election was the final straw.”

Brandon Stephens, president of the professional holiday decorating company Christmas Decor, said early business is up 15% to 20% compared to the same period last year. Orders came in as early as April — for April, he said. The company's franchises serviced more than 43,000 homes and businesses last year around the country and expect a jump to about 52,000 this year. Most of the early activity is residential.

Jacob Pinkham, a new father in Huntington Beach, California, said he and his wife had a hard-and-fast no-Christmas-till-December rule, until this year amid pandemic fatigue, election turmoil and the economic devastation hitting millions around the world.

The couple got to thinking about their Christmas trip to Cork, Ireland, a few years back and the all-Christmas radio station they discovered there, Christmas FM. They've been listening for weeks.

“Our daughter was born just before COVID hit, so having to deal with being a new parent, a new family and with a highly contagious virus circulating, we decided we needed some Christmas cheer earlier than usual,” he said. “We also have two dogs. I don’t know how they feel about the Christmas music, but they're not barking, so that’s a positive sign.”

Pinkham's favorite holiday tune? If he had to choose, it would be Nat King Cole's “The Christmas Song.”

In Louisville, Kentucky, 29-year-old Mindy Jones has about 1,100 square feet and an additional 400-square-foot basement in a new home she moved into about a month ago with her husband, their 3-year-old daughter and the family dog.

In the past, they'd hold the holiday to two Christmas trees, including a 7-footer adorned with all their special ornaments standing post in the living room. This year, the tree count is five. The first two went up Nov. 11. There may be more by the time Christmas rolls around. Usually, Jones waits until the Saturday after Thanksgiving to jump-start the holiday.

“I wanted to spread the ‘holly jolly’ feeling a little longer than just December,” she said. “With everything going on this year, if it brings a little more joy and excitement to what's been a really tough year, why not?”

The drive in Jones and many others to push the holiday cheer is in part the desire to connect with rituals, especially now when so many traditions and so much holiday fun at work and among extended family has been upended.

Erica Keswin, a business consultant with a new book out in January, “Rituals Roadmap,” describes the benefits with three P's.

“We feel psychological safety and a sense of purpose, which leads to increased performance,” she explained, noting that the power of our senses — smell, taste, touch, etc. — helps lead the way.

That might go a long way toward explaining Lisa Torelli-Sauer's cookie stash in Aschaffenburg, Germany, where the American lives with her husband and two boys, 9 and 7.

“We're experiencing partial lockdowns and will likely have limits on our ability to celebrate the holidays with family," she said. “I’ve found early and intense solace in one thing: Christmas cookies.”

She's buying, not baking, the stash of gingerbread, cinnamon stars and spiced coconut cookies she has kept on hand since the beginning of November.

“I haven’t left the grocery store without picking up multiple packs of cookies,” Torelli-Sauer said. “After a long and stressful day, it’s deeply satisfying to settle down with a cup of coffee and the perfect assortment of Christmas sweets.”

Much of the early Christmas fervor has to do with pared-down Thanksgiving due to the coronavirus pandemic.

“I think the rush is because Thanksgiving is normally about gathering, which more than likely won’t happen for a lot of people this year,” said Jennifer Rizzo, an artist and interior designer who wrote a book titled “Creatively Christmas.”

“Much of the enjoyment of the holidays is really as much about the preparation as the day itself, and people are digging into that aspect of Christmas,” she said.

Danielle Martin, 42, in Manteno, Illinois, is a big Christmas person. But usually she waits to decorate until the day after Thanksgiving. This year, she got busy on Nov. 1, a candy cane-themed front porch included.

“It's probably earlier than most, but we love it,” she said.

“It definitely made a change in our moods,” she said of herself, her husband and her three kids, ages 10, 7 and 5. “The world is so difficult right now for everybody, so we were ready.”

Martin put up a hot cocoa bar, their stockings on the fireplace mantel, a large framed sheet of music for the song “Jingle Bells” and a 9-foot tree, among other decorations. And that's just the living room.

Each of her kids will soon have their own tree in their rooms. When she's done, Martin said there will be seven trees in all.

Early Christmas is also on the minds of folks in and around Grapevine, Texas, near Dallas. Also, wine. Tickets went on sale Nov. 10 for the city's adults-only Christmas Wine Train excursions next month in decorated vintage rail cars — wine and a visit from Santa included.

“We sold out in six minutes,” said Ana Chavez, a spokeswoman for the Grapevine Convention and Visitor's Bureau. “There's Christmas crazy in Texas!”