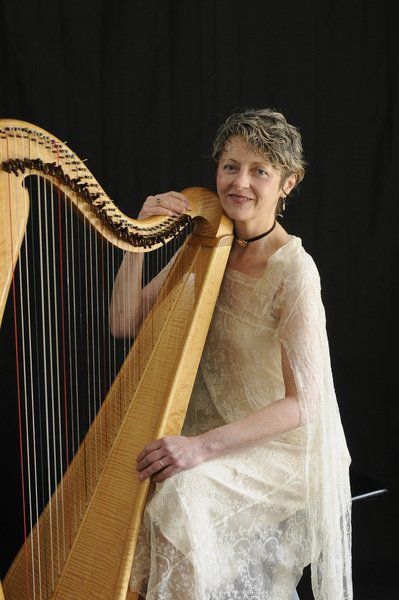 Courtesy photoBobbie Wayne will play “Greensleeves” and other traditional Christmas music on her harp in Marblehead on Saturday. 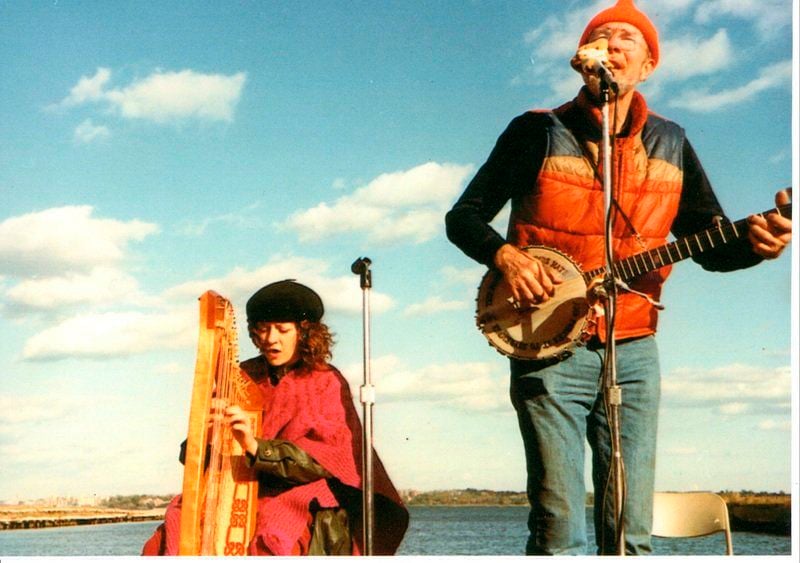 Courtesy photoBobbie Wayne, shown here playing with Peter Seeger in New York in the 1980s, will play a program of Christmas music in Marblehead this Saturday. 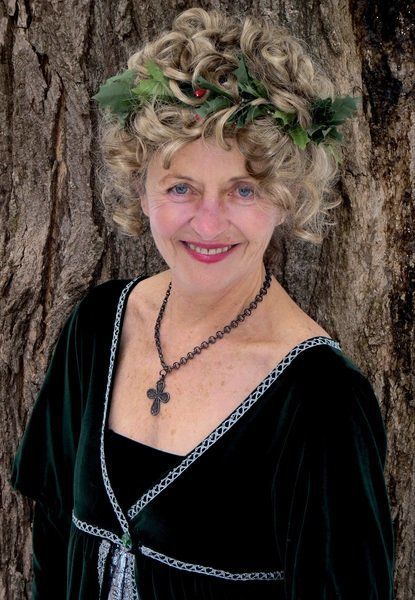 Courtesy photoBobbie Wayne, of Marblehead, will play Celtic harp on Saturday in a Christmas program that will benefit St. Andrew’s Episcopal Church, where she is performing. 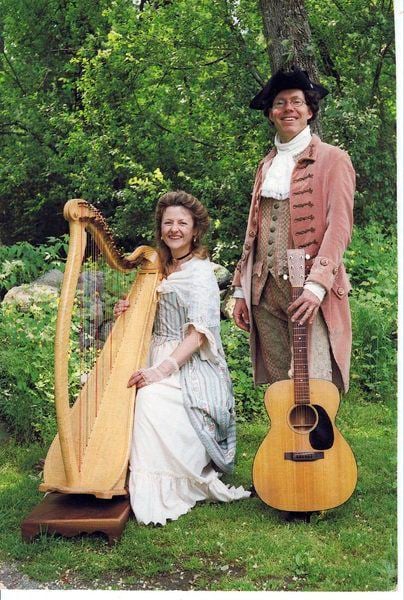 Courtesy photoBobbie Wayne often performs with her husband, Dan Mozell, who will join her on two tunes at “Greensleeves” on Saturday. The pair are shown in the 1980s in costumes that they wore while playing 19th-century music.

Courtesy photoBobbie Wayne will play “Greensleeves” and other traditional Christmas music on her harp in Marblehead on Saturday.

Courtesy photoBobbie Wayne, shown here playing with Peter Seeger in New York in the 1980s, will play a program of Christmas music in Marblehead this Saturday.

Courtesy photoBobbie Wayne, of Marblehead, will play Celtic harp on Saturday in a Christmas program that will benefit St. Andrew’s Episcopal Church, where she is performing.

Courtesy photoBobbie Wayne often performs with her husband, Dan Mozell, who will join her on two tunes at “Greensleeves” on Saturday. The pair are shown in the 1980s in costumes that they wore while playing 19th-century music.

The meaning of Christmas is contained in its music, which goes back hundreds of years.

Marblehead harpist Bobbie Wayne will explore that history in her program, “Greensleeves,” which she is performing at the Church of St. Andrew in her hometown on Saturday.

“It’s a one-woman show about the origin of our Christmas celebration we know today,” Wayne said.

Because America incorporates many cultures, she will sing songs in five languages, including German, Italian and Spanish.

Some of these songs are old, and predate America’s founding, but were kept alive in this country by the people who came here.

They include a Dutch hymn from the 1500s, along with the English song that gives Wayne’s program its title, “Greensleeves,” the music for which was also written in the 1500s.

“There is a plot to the show, and everything takes part because of the things that proceed it, and it all comes full circle,” Wayne said. “It begins with me walking in from outside. I come walking in singing a Shaker tune a cappella.”

The show is a fundraiser, and proceeds will be donated to Growing Into Our Future, a capital campaign for the church, which is celebrating its centennial in 2024.

Along with playing music, Wayne will share some Christmas lore and also recite poetry that celebrates the holiday.

The latter will include a poem in Middle English, as well as Clement Clarke Moore’s “A Visit From St. Nicholas” from the 19th century, which famously begins, “’Twas the night before Christmas.”

“People get laughing, it’s so much fun to do that,” Wayne said. “It’s a jolly show at that point and then it becomes a little bit poignant, because Christmas is also a poignant time. It’s a time when people have so many expectations, and they expect to be happy, so our sorrows seem all the meaner amongst the splendor.”

While Christmas is a religious holiday, Wayne said her focus is on the history of its celebration, which has a theme that everyone can appreciate.

“The central event of Christmas is the birth of a child and the hope of peace for all,” Wayne said.

Her performance is also distinguished by the fact that she will accompany her vocals on a neo-Celtic harp, which she learned to play in the 1980s.

“My harp has these little things on top, little hooks,” Wayne said. “I reach over and pull up the hook, and that string becomes a half-step higher. So it goes from F to F sharp.”

Wayne bought her first harp after she saw it in a music store window in Greenwich Village in the 1970s. She now owns four of the instruments, one of which has appeared on television.

“If you’ve been watching ‘Poldark,’ I bought Elizabeth’s harp,” she said. “I bought it from the studio that was renting the harp to the show. It was built in 1895, and it’s what they call a single-action harp.”

It would be years after Wayne bought her first harp before she learned to play it, but she had developed some skills on the mountain dulcimer, which she played several times with legendary folk musician Pete Seeger.

That connection began with an appearance at the Great Hudson River Revival in 1982, where she had gone to work as a volunteer.

“This fellow stood up with a banjo and started playing,” Wayne said. “I said, ‘I’ve got a dulcimer.’ So the first person I sat down and played folk music with was Pete.”

She and her husband, Dan Mozell, who plays guitar and will join Wayne for two songs on Saturday, performed together for many years in New York.

Wayne also lived in Nashville for eight years before moving to Massachusetts and, ultimately, to Marblehead 2 1/2 years ago.

“Because I was literally the only Celtic harp player in Nashville, I got to sit in and play with all these hit songwriters,” she said.

Wayne, who also worked as a music therapist, has always been “distracted” by other arts, especially painting, and specializes in portraiture of both people and animals.

But she returned to playing harp recently and gave a performance at Lee Mansion to benefit Marblehead Museum last year.

Just prior to that, Wayne said, she played a song that she wrote about radio broadcasters Jim Braude and Margery Eagan in a live Facebook feed from their show.

Wayne said that she has added and subtracted songs over the years from her “Greensleeves” program, but it has always been popular with audiences.

She played it one Christmas season in New York at St. Bartholomew’s Church, where people would stop on their way to the train station while trying to get home.

Wayne remembers thinking that this was going to be a tough audience, but saw how the music changed their mood.

“About a quarter of the way through the show, I could see people relaxing,” she said. “Everybody got up and stood in the aisles and came up and either hugged me or told me a story.”

What: “Greensleeves,” a Christmas musical play by Bobbie Wayne