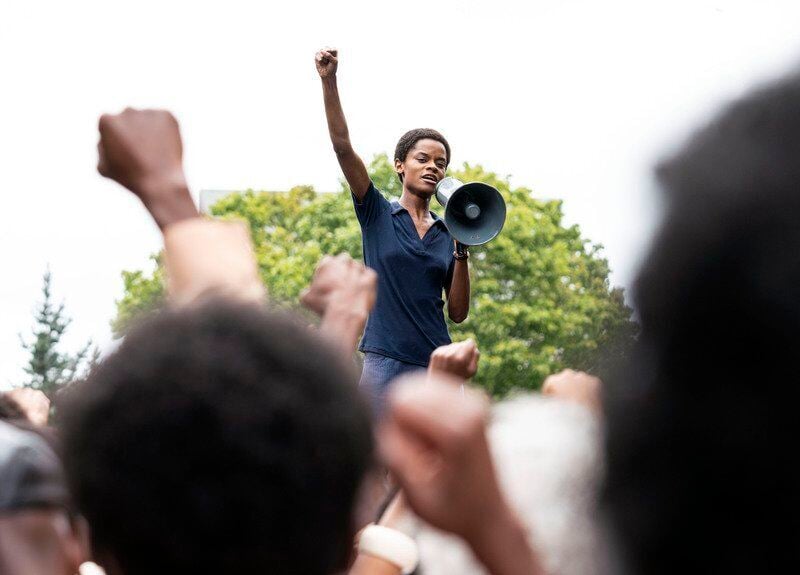 Letitia Wright is shown as Altheia Jones-LeCointe in a scene from "Mangrove," one of five films in Steve McQueen's "Small Axe" series. (Des Willie/Amazon Prime Video via AP) 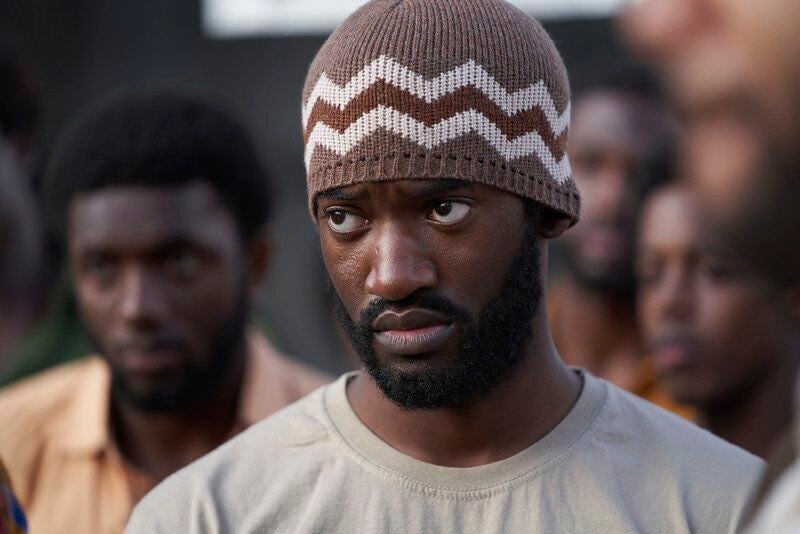 Malachi Kirby is shown as Darcus Howe in a scene from "Mangrove," one of five films in Steve McQueen's "Small Axe" series. (Des Willie/Amazon Prime Video via AP) 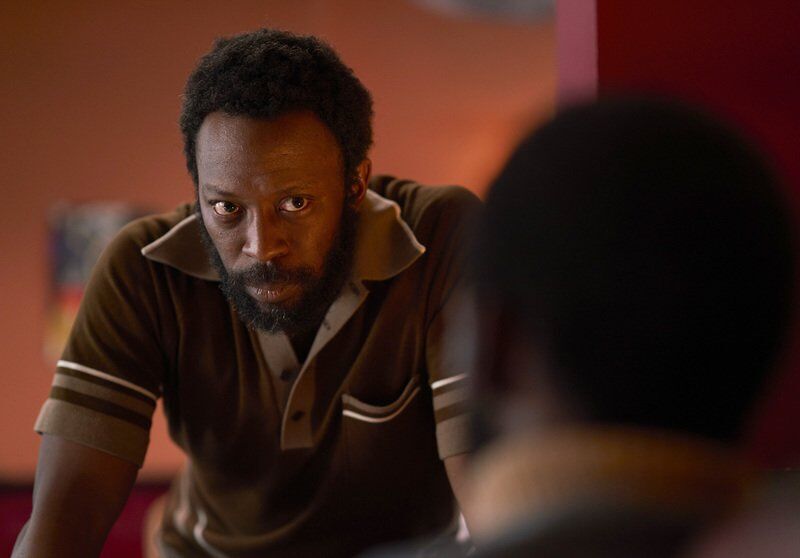 Shaun Parkes is shown as Frank Crichlow in a scene from "Mangrove," one of five films in Steve McQueen's "Small Axe" series. (Des Willie/Amazon Prime Video via AP)

Letitia Wright is shown as Altheia Jones-LeCointe in a scene from "Mangrove," one of five films in Steve McQueen's "Small Axe" series. (Des Willie/Amazon Prime Video via AP)

Malachi Kirby is shown as Darcus Howe in a scene from "Mangrove," one of five films in Steve McQueen's "Small Axe" series. (Des Willie/Amazon Prime Video via AP)

Shaun Parkes is shown as Frank Crichlow in a scene from "Mangrove," one of five films in Steve McQueen's "Small Axe" series. (Des Willie/Amazon Prime Video via AP)

For Steve McQueen, bringing back the London of his childhood began with remembering the scents of his youth.

In “Small Axe,” McQueen’s ambitious five-film anthology about London’s West Indian community, the “12 Years a Slave” director resurrects the British capital in the decades before its multicultural present, tracing the Caribbean immigrant experience through the racism of the 1960s, ’70s, and ’80s in order to illuminate the injustices of today. It’s a cycle, operatic in scope, with movements of resistance, oppression, protest, family and celebration. But its textures are precise and, often, personal.

The second of the five films, the rapturous “Lovers Rock,” captures a 1980 Blues Party — underground, improvised dance parties with thumping dub reggae held in homes since nightclubs were typically closed to nonwhites. McQueen, 51, was too young for those parties. But he remembers how, during sleepovers at his grandmother's, his uncle would leave a back door unlocked so his aunt Molly could sneak out to them.

“Through smell, so much memory came back to me. Obviously, I was of a certain age,” McQueen said. “I’d end up sleeping in a bed with coats piled on top of me when I woke up.”

The first film of “Small Axe,” “Mangrove,” begins streaming on Amazon Prime Video on Friday. (It has already begun airing on the BBC in Britain.) Several of the films had been set to premiere at the Cannes Film Festival, but they instead first unspooled virtually and at drive-ins during the New York Film Festival, where they were received with raves. McQueen began working on the anthology 11 years ago, before the best picture-winning “12 Years a Slave," initially imagining it as a TV series.

“I didn’t know exactly what it was going to be, and, to be honest, I don’t think I had the maturity or at that time the strength to look at myself or that world. It was so close to me. It was a part of me,” McQueen said in a recent interview by phone from London. “It was trying to understand who and what I am and where I come from.”

McQueen, born in West London to Grenadian and Trinidadian parents, has previously made films about Irish protest (“Hunger”), sex addiction in New York (“Shame”) and an all-female heist in Chicago (“Widows”). But “Small Axe” is his first production in his native Britain.

The project swelled, he said, because in looking for a story about the Black experience in London, he found a multitude. The terrain, overlooked by history books and popular culture alike, was rich. The films, themselves, became a collective; the title references a West African proverb popularized by Bob Marley: “If you are the big tree/ We are the small axe/ Ready to cut you down.”

Taken together, “Small Axe” stitches together a little-known history, both intimate and sweeping, that had previously lingered on the margins and in family folklore. Shaun Parkes, who plays Frank Crichlow in “Mangrove,” first heard about his character while working 10 years ago with Crichlow’s daughter, Lenora, an actor. The film dramatizes the police harassment of the Mangrove, a Caribbean restaurant owned by Crichlow in London’s Notting Hill district and an epicenter for the Black community in the late ’60s. A string of incidents led to a trial resulting in the first judicial acknowledgement of institutional racism in the police force.

“She’s telling me about this, and my Spidey senses are going off. It’s an amazing story. But I’m thinking, ‘When is that ever going to get made? Who is ever going to care enough for that to get done?’” Parkes said. “It took someone like Steve McQueen to show up.”

“Mangrove” takes the shape of a courtroom drama, but it proceeds less like a Hollywood-style civil rights campaign than as a furious response to being unjustifiably set upon. Parkes’ Crichlow wasn’t trying to be a martyr.

“I needed to remember that this is not a political rant. This is a heartfelt story about a man who wanted to cook rice and beans," Parkes said. “That’s all he wanted to do.”

McQueen relied initially on a TV-style writers room for brainstorming, eventually pairing off to write each film with either Courttia Newland or Alastair Siddons. Newland, an author of Jamaican and Bajan heritage, likewise pulled from memories of his own upbringing, focusing on the drastically different spaces Black people are forced to navigate. “Lovers Rock” is set almost entirely within the house party, but a walk just down the sidewalk brings a reminder of the racist reality lurking all around. But inside, it's joyous.

“I was born into this, but it was juxtaposed with the world outside. The world outside was not like the world inside,” Newland said, recalling a visiting white friend eyeing his family’s curry goat. “I had to learn, ‘Oh, this is not what everyone else does.’”

Amarah-Jae St. Aubyn, one of several young actors who break out in “Small Axe,” drew from her own family history in playing a partygoer in “Lovers Rock” who sneaks out to the Blues much like McQueen's aunt did. Her father was a reggae musician — she grew up with the music — but she needed to learn the dance moves of an earlier generation. During rehearsal, she noticed her dad's picture on the wall. The shoot, with music piped in, was even more transportive.

“When we were filming, I felt like it was an escape being in that house. It was like the outside world didn’t matter,” St. Aubyn said. “Everyone was equal, on the same level. It doesn’t matter who’s the lead, who’s this, who’s that. We’re all this community in one beautiful party. It was all about energy.”

In a way, “Small Axe” has also carved out a space for itself in an industry traditionally inhospitable to such stories. After filming the anthology (McQueen completed most shooting before the pandemic arrived), the director penned an op-ed describing the overwhelming whiteness of film sets in Britain.

“You just want the space to express yourself in the same way as everyone else, and the capital to do so,” he said. “When I made ‘12 Years a Slave,’ people said to me it was impossible because they didn’t think that movie would travel abroad. Well, it made a lot of money abroad and it changed a lot of things in Hollywood. So it’s about giving people the opportunity to make work — not giving. We’ll take it, actually. We’ll just take it.”

While in post-production this summer, McQueen's project took on even greater resonance with the death of George Floyd and others, and the subsequent worldwide protests — including one in London attended by John Boyega, star of the third “Small Axe” film, “Red White and Blue,” a father-son tale in which Boyega plays a rookie police officer.

McQueen, who dedicated the films to Floyd, began thinking of the anthology as science fiction — movies not just about the past and present, but about the future.

“Editing for me was a meditation,” McQueen said. “It was a life vest. In some ways, it was my refuge.”