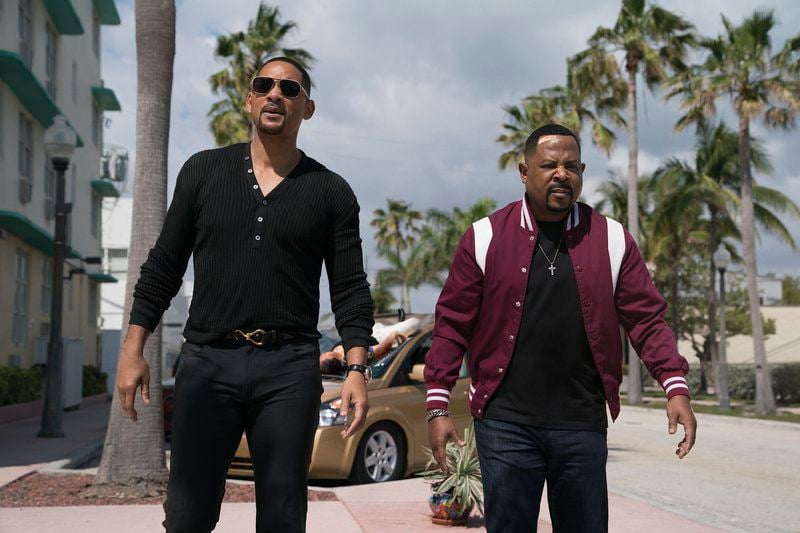 BEN ROTHSTEIN/Columbia Pictures-Sony via APSeventeen years after "Bad Boys II," Will Smith, left, and Martin Lawrence are back as detectives Mike Lowrey and Marcus Burnett. 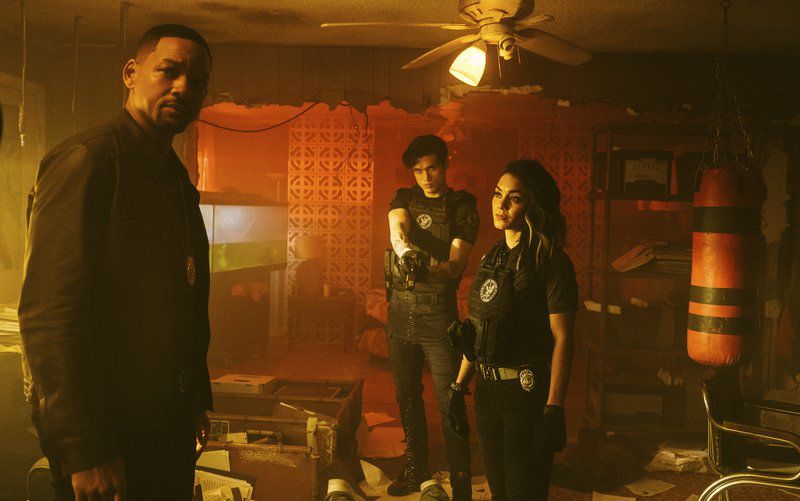 Columbia Pictures-Sony via APFrom left are Will Smith as Mike Lowrey, Charles Melton as Rafe and Vanessa Hudgens as Kelley in a scene from "Bad Boys for Life."

BEN ROTHSTEIN/Columbia Pictures-Sony via APSeventeen years after "Bad Boys II," Will Smith, left, and Martin Lawrence are back as detectives Mike Lowrey and Marcus Burnett.

Columbia Pictures-Sony via APFrom left are Will Smith as Mike Lowrey, Charles Melton as Rafe and Vanessa Hudgens as Kelley in a scene from "Bad Boys for Life."

The third edition of the “Bad Boys” franchise starts as it must do: with a gleaming Porsche swerving at impossible speeds through Miami traffic under the expert control of Will Smith, with Martin Lawrence growing very sick beside him.

The engine snarls, the car repeatedly fishtails and strains. Smith looks over to his partner with alarm and points out that the interior of the sports car is hand-stitched leather. Lawrence’s cheeks bulge; he’s about to hurl: “You better drink it,” the driver barks.

All is good. We’ve again got Smith’s cocksure Detective Mike Lowrey beside Lawrence’s more cautious Marcus Burnett. There’s the customary playful banter between opposites. We’ve got sunny, titillating Miami, and we are inches from death but really never that close. We’re in our ’90s comfort zone. You can almost hear it: “Bad boys, bad boys/ Whatcha gonna do, whatcha gonna do/ When they come for you?”

So it’s so disappointing that “Bad Boys for Life” soon swerves into weird neighborhoods and gets bloated as it tries to get deep, trying to explore topics like religion, mortality, biological determinism, individual legacy and aging. It’s oddly flat and unfunny and has strayed so far from its gritty roots that it might be called “Bad Boys for Life Insurance.”

Sure, you can’t stay still. Smith and Lawrence are both past 50, and their characters can’t keep to the same formula of “muscle shirts and body counts,” as Burnett argues. But do we really want Burnett to straight-faced tell a Buddhist parable about a horse and then ask Lowrey about how he can overcome his own trauma: “Where are you going, Mike?”

The first film in the franchise hit theaters 25 years ago, giving us foreign baddies with beepers, Tea Leoni in little skirts, many bricks of heroin and an exploding airplane hangar. Eight years later came “Bad Boys II,” a slicker flick with slow-mo sideways shooting, a feisty Gabrielle Union in a white suit, the annihilation of many cars and many ecstasy pills.

“Bad Boys for Life” doesn’t have drugs — if you don’t count Viagra jokes — but instead has a murder plot to assassinate everyone connected with an old drug case Lowrey worked on before he teamed up with Burnett. Someone is out for revenge, and they are exposing skeletons in Lowrey’s closet, uncovering a backstory inconsistent to the Lowrey we have come to know. We add clichés — a team of smart, young, sassy cops — on top of some twists worthy of Shakespeare.

Adil El Arbi and Bilall Fallah have taken over from Michael Bay in the director’s chair, but the look of the film essentially mimics its predecessors, with saturated colors, quick cuts, muscular stunts and lots of pretty women. An understated Vanessa Hudgens plays a cool cop and Kate Del Castillo is on the opposite side in more than one sense, playing an absolutely unhinged cartel boss wife who uses witchcraft. Joe Pantoliano returns as the Pepto-swigging detectives’ boss and DJ Khaled has a small role, as well as putting together the lively soundtrack.

There are sly references to the previous films — a private conversation between the detectives is accidentally broadcast as in the second film and rats make an encore performance in the new one — but the filmmakers have forgotten that what makes this franchise work: The interaction of Smith and Lawrence in stressed environments. So often in the new film, they are separate, dealing with their own stuff. “Bad Boys” only works when the bickering cops are center stage.

Age has taken its toll: Burnett is a grandfather now who needs glasses and is eyeing retirement, while Lowrey is unsettled, still a playboy but a wistful one who colors his goatee black with hair dye. (Yes, there are colonoscopy jokes in this film.) Lowrey is having second thoughts about one flame who got away: Paola Nunez, who plays a fellow cop. A crisis forces Burnett to make a vow to God. Hell is a topic discussed — “darkness that swallows you whole.” We are a long way from the time Burnett was shot in the keister by his partner.

The convoluted plot keeps finding false endings that just lead to bigger outlandish stunts — many, many helicopters and motorcycles — until it ends in a rundown palace in Mexico City with a fiery conclusion that goes to cartoonish, very Bay-ish lengths. Smith and Lawrence are far from home, on foot and facing a military-style ambush. It is a franchise that has lost its way.

A potential sequel is hinted at during the end credits, but it’s hard to believe a fourth episode could save the “Bad Boys” legacy. Still, as long as Smith and Lawrence are willing to pair up again, “whatcha gonna do when they come for you?”