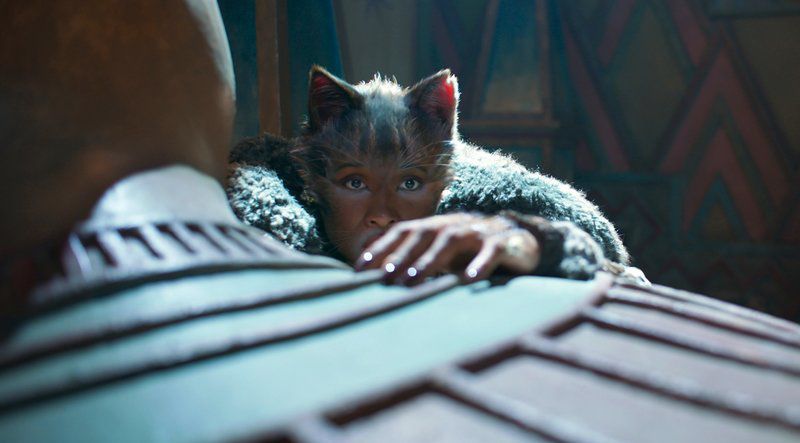 Universal Pictures via APJennifer Hudson plays Grizabella in "Cats," based on the Andrew Lloyd Webber musical. 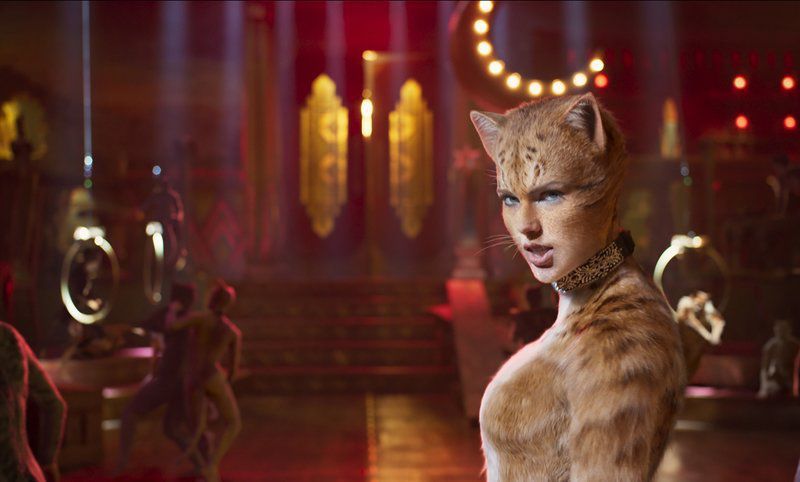 Universal Pictures via APTaylor Swift plays the flirtatious and mischievous Bombalurina in "Cats."

Universal Pictures via APMacavity, played by Idris Elba, faces off with Victoria, played by Francesca Hayward, in a scene from "Cats." 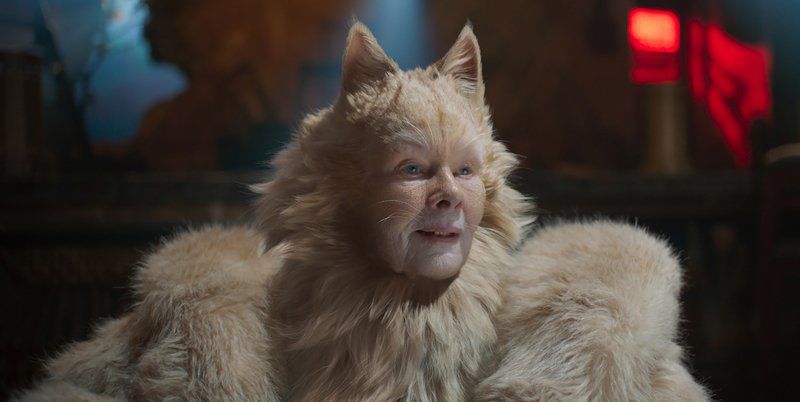 Universal Pictures via APJudi Dench stands out as the wise Old Deuteronomy in "Cats."

Universal Pictures via APJennifer Hudson plays Grizabella in "Cats," based on the Andrew Lloyd Webber musical.

Universal Pictures via APTaylor Swift plays the flirtatious and mischievous Bombalurina in "Cats."

Universal Pictures via APMacavity, played by Idris Elba, faces off with Victoria, played by Francesca Hayward, in a scene from "Cats."

Universal Pictures via APJudi Dench stands out as the wise Old Deuteronomy in "Cats."

There’s apparently enough groundbreaking technology used in “Cats” for NASA to send a rocket to unexplored parts of the universe — perhaps to a far-off planet where cats sing, dance on two legs and recite T.S. Eliot poetry in half-cockney accents.

But let’s forget the much-discussed “digital fur technology” used to turn stars like Jennifer Hudson, Taylor Swift and Idris Elba into state-of-the-art, fabulous felines. Spoiler (or spoiled milk) alert: It’s not the technology that makes a whisker of difference here (sorry for the cat puns, but if you see this film, you’d better get used to them).

No, it’s an old-school quality that’s the real “special effect” worth talking about in “Cats,” the new film version of the Andrew Lloyd Webber juggernaut that launched the mega-musical in the ’80s: veteran stage talent. Case one: Judi Dench, who can take any silliness and somehow make it genuine and moving, even in a computer-generated cat suit. Case two: her old friend Ian McKellen, who can embody an aging cat as well as he can Gandalf or Macbeth (which he once played opposite Dench). Case three: James Corden, who, let’s not forget, is a Tony-winning stage actor especially good at slapstick, which he uses here to amusing effect.

Bottom line: However you feel about “Cats” the show — and let’s face it, some love it and some hate it, EXACTLY as it will be with this film — give director Tom Hooper credit for assembling a cast that knows its way around a stage. This estimable group includes, along with the theater veterans, music stars like Hudson and Swift, who each make the most of one blockbuster number suited to their talents. It includes movie stars like Elba — who talks and growls more than sings — and Rebel Wilson, a “Gumbie Cat” who really should be called a “Raunchy Cat.”

And dance stars. Choreographer Andy Blankenbuehler (“Hamilton”) brings in top talents like Robbie Fairchild, the former New York City Ballet principal dancer who can sing and act, too, besides being one of the most graceful cats in the alley. Alongside him dances Francesca Hayward, a principal dancer with the Royal Ballet, in the ingenue role of Victoria, and other stars of ballet, tap dance and hip-hop.

Before explaining the plot — and really, there’s never been much to explain — a brief primer: “Cats” is not so much a show as a cultural phenomenon. It ran in London’s West End for 21 years, and on Broadway for 18. Those are just the original productions; it has been performed in more than 50 countries and in 19 languages.

All this for a show with no real narrative arc, based on a series of poems adapted by Webber from Eliot’s 1939 “Old Possum’s Book of Practical Cats.” Here, as opposed to the stage show, the action is set in 1930s London, where Eliot would have lived.

It is Victoria (Hayward) who begins our story. The innocent young newcomer is unceremoniously dumped by her owner in an alleyway. Suddenly, she is surrounded by cats — the Jellicle Cats, who have come together for the annual Jellicle Ball. (Their opening song, “Jellicle Songs for Jellicle Cats,” is addictively catchy.)

The ball marks the night when one lucky cat is chosen to rise skyward to the “Heaviside Layer,” and be reborn. The choice lies with Old Deuteronomy, the grand old patriarch, who traditionally was a man — but this is the #MeToo era, and besides, they got Dame Judi Dench — so, He is a She. Dench, whose slated appearance in the original London show was thwarted by injury, takes her appointed place here, and lends the proceedings needed heft and authenticity.

If Dench embodies good, Elba’s character, the green-eyed Macavity, embodies evil. He’s desperate to win the ball’s prize, even if he has to abduct every other cat he’s competing with.

But before the ball, each cat sings what amounts to a personal audition song — sort of “A Chorus Line” for ambitious felines. They include Jennyanydots, played by Wilson in her usual raunchy, anything-goes style. (“Stop milking it!” she meows.) Jennyanydots lives in her owner’s kitchen and sleeps by day, but dances with cockroaches by night.

Bustopher Jones (Corden) is the well-groomed glutton, in spats, who eats his way through his entertaining number. We also have Gus (short for Asparagus) played by McKellen, an elderly feline who recounts a life in the theater, and the younger Mr. Mistoffelees (Laurie Davidson), a magician in training. There’s Rum Tum Tugger (singer Jason Derulo in an charismatic performance), the evening’s heartthrob.

And then we have Bombalurina! Swift enters dangling from on high on a moon crescent for her number, an appropriately showy piece about her partner in crime, Macavity the Mystery Cat (it rhymes with “depravity”). Bombalurina is, well, pretty much everything you’d expect or want in a cat version of Taylor Swift.

But the big number in “Cats” is, and will always be, “Memory,” sung by Grizabella (Hudson), a former Glamour Cat who’s now shunned and looking for redemption. Hudson sings this song twice (always crying), so don’t worry if you don’t hear the full belt the first time — it’s coming. (Broadway stalwarts may still miss the famous Betty Buckley version.)

Does all this work? Well, it depends on how you feel about ... “Cats.” Did you love the show? You’ll find stuff to love here. Did you hate it? Ditto! Or maybe ... you’ll have both reactions? That’s possible, too.

And “Cats” will live on. This is a piece of pop culture that has WAY more than nine lives.