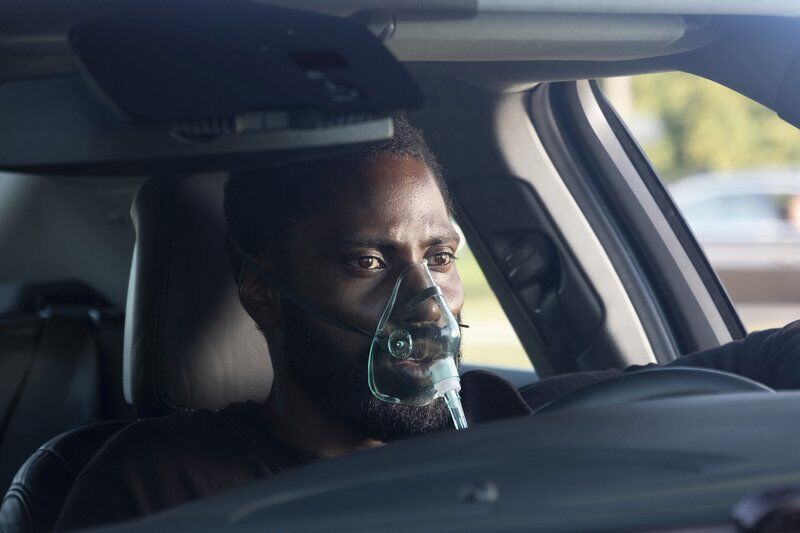 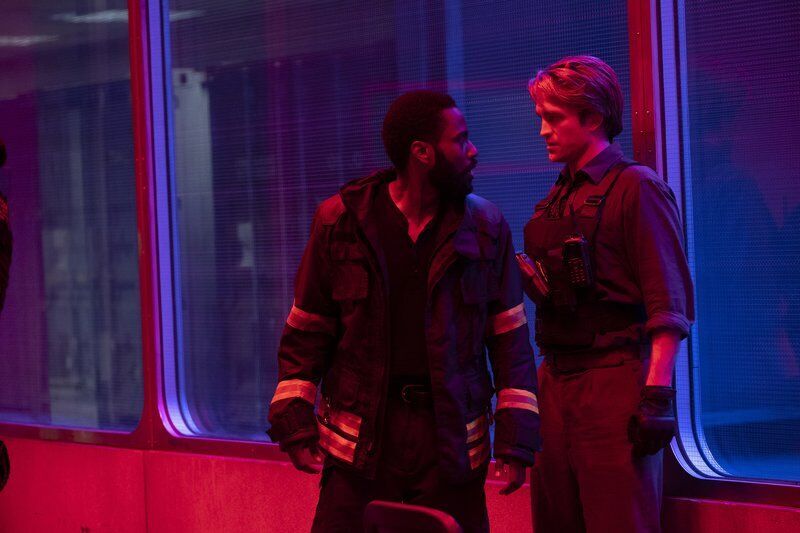 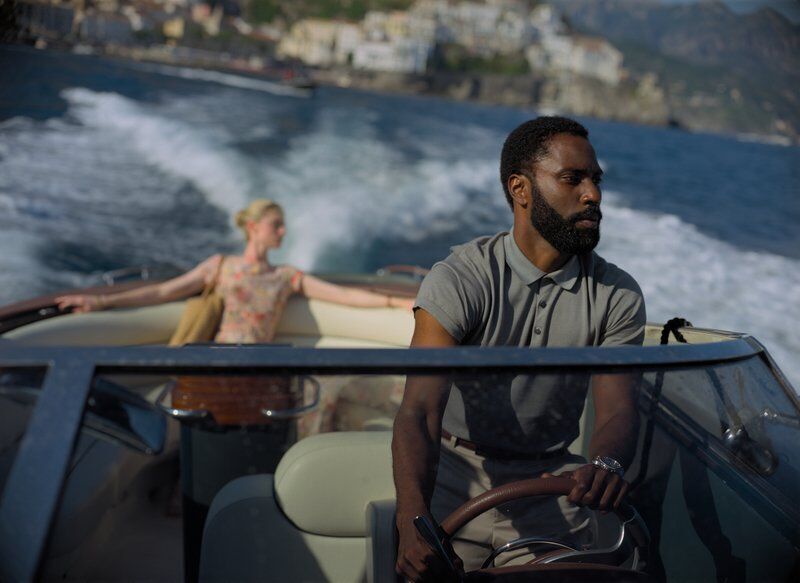 Elizabeth Debicki and John David Washington are shown in a scene from "Tenet." (Melinda Sue Gordon/Warner Bros. Entertainment via AP)

Elizabeth Debicki and John David Washington are shown in a scene from "Tenet." (Melinda Sue Gordon/Warner Bros. Entertainment via AP)

I went in fresh to “Tenet.” I didn’t have any real sense of the plot, yes, but it's more that it had been some five months since I was last in a movie theater. That’s a long hiatus — a dark ages for sitting in the dark — for someone, anyone, used to going to the movies more days than not. The last film I had seen in a cinema, back in March, was the Vin Diesel vehicle “Bloodshot,” so you can imagine my eagerness for a new aftertaste.

It’s complicated, in a way, to parse the experience. There’s the feeling of being back in a movie theater, and then there’s the sensations particular to “Tenet.” For Christopher Nolan, whose films build their conceptual architecture around the metaphysics of movies themselves, it’s kind of one and the same. His movies are designed, from a molecular level, to unlock innate cinematic powers and glorify the almighty Big Screen — a lonely god these last few months.

As the first major film released in theaters since the pandemic began, “Tenet” has swelled in the minds of anxious moviegoers, adopting the role of savior. Nolan vs. COVID-19 is as much part of the drama of “Tenet” as anything on screen, and just as convoluted and disorienting. Seeing “Tenet” for this critic meant crossing numerous state lines and watching it at a nearly empty movie theater — a luxury of social distancing that won’t be possible for most, even in reduced capacity theaters. At its best, moviegoing has always been thrilling, even dangerous. That may be doubly so right now.

For better and worse, “Tenet” is just a movie. It won’t beat the virus and it won’t single-handedly save movie theaters. It won’t even really blow your mind. But for much of its 150-minute running time, Nolan’s globe-trotting sci-fi riff on the spy thriller will provide a dazzling escape, one dense with singular imagery and intellectual puzzles. And, perhaps most vitally, it will give a cool, brutalist refresher of the movies’ capacity for awe, for imagination, and, yes, for tiresome grandiosity. For the palindromic “Tenet,” it cuts both ways.

Naturally, “Tenet” opens on a crowded auditorium. At an opera house in Kyiv, just as the conductor is raising his baton, a barrage of bullets rings out and masked men take the stage. Outside, a squadron of covert American agents are stirred. They pick a local police patch for their shoulders, and one among them (John David Washington, known only as “the Protagonist” in the credits) maneuvers to rescue a man who sits in a closed balcony. He greets him with the coded phrase “We live in a twilight world.”

As he’s trying to stop bombs from going off in the theater, an odd thing happens. Tussling with one of the terrorists, a bullet seems to fly backward into the gun. After being taken hostage and tortured, he blacks out. When he wakes up much later, he’s told that he’s been released from the CIA and been enlisted in a shadowy organization known as Tenet. The mission goes beyond borders, he’s told. A Cold War — “ice cold” — is brewing. He’s to try to prevent World War III and an apocalypse worse than nuclear holocaust.

The details of this secret war — who’s on what side, what’s at stake — take a while to unspool. But just as Nolan’s last film, the gorgeously synchronized WWII survival tale “Dunkirk,” was arranged elementally by land, sea and air, “Tenet” is spliced between past, present and future. A heady genre movie that puts James Bond-like tropes through a collider, it’s very much a companion piece to “Inception” (a heist movie with a sci-fi spin) and just as laden with continual explanation.

The central conceit here is that a rare mineral can reverse the entropy of objects. That means time travel, inverted weapons, car chases that speed both ways and the biggest blockbuster to ever look a little like the backward-running Pharcyde music video “Drop” by Spike Jonze. These weapons are the “detritus of a coming war,” we’re told; the future is attacking the past.

The Protagonist’s journey brings him in touch with a British fixer named Neil (a delightfully knowing and especially dashing Robert Pattinson — you want him always to say more than he does), a Mumbai arms dealer (Dimple Kapadia), and ultimately a Ukrainian oligarch named Andrei Sator (Kenneth Branagh). To reach the insulated Sator, the Protagonist finds an entry through his wife, Kat (Elizabeth Debicki, the film’s most suave and affecting performer), an art dealer who has come to detest her husband.

As a film, “Tenet” rumbles like a jumbo jet. Its sheer tonnage is what most strikes you. There are trucks and ships, giant turbines and helicopters, concrete masses and 747s. It’s a literally heavy movie. The settings, which span from the Amalfi Coast to the “closed cities” of Russia, give “Tenet” a technological backdrop of ecological destruction. If anything, I wish Nolan had taken his future vs. past concept further, instead of situating it so firmly in the more familiar (in movies) world of black-market weapons dealers.

“Tenet” lacks the elegant mastery of “Dunkirk” or the cosmic soulfulness of “Interstellar,” but it has a darkly grand geometry. As instruments in an abstraction, most of Nolan’s protagonists verge on the hollow. Washington glides through the film with charisma and preternatural smoothness but his character’s inner life goes unexplored. Leonardo DiCaprio’s Cobb in “Inception” wasn’t so different, but the mission plunged directly into his subconscious. Nolan, a visionary filmmaker, can sometimes be too busy conjuring visions to build a character.

Time is Nolan's real protagonist, anyway. Its loss was the agony of “Interstellar.” A ticking clock, on three different temporal tracks, measured “Dunkirk.” In “Tenet,” it moves in circles: backward and forward like waves in the ocean. It’s a distinctive characteristic of the movies, and it’s one you can feel Nolan investigating and experimenting with. It’s easy to imagine “Tenet” was born in an editing suite, while a shot was rewound and epiphany struck.

Time has grown strangely elastic during the pandemic (as have movie release schedules). Today, yesterday and tomorrow blur together. So it’s some comfort that even still, Nolan’s clock keeps ticking.

“Tenet,” a Warner Bros. release, is rated PG-13 by the Motion Picture Association of America for intense sequences of violence and action, some suggestive references and brief strong language.