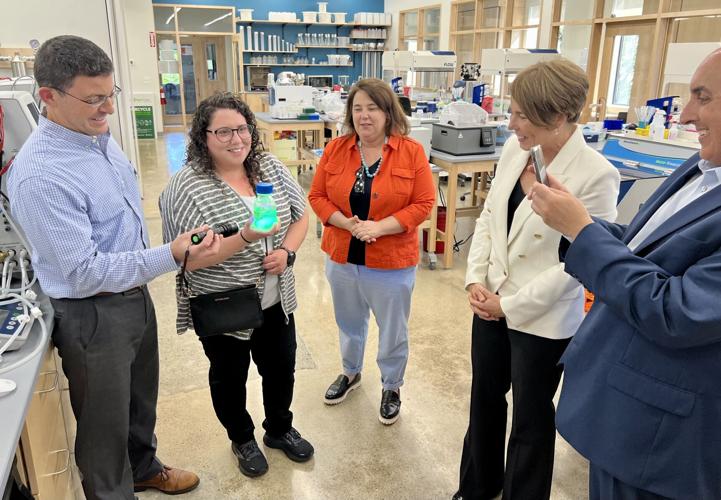 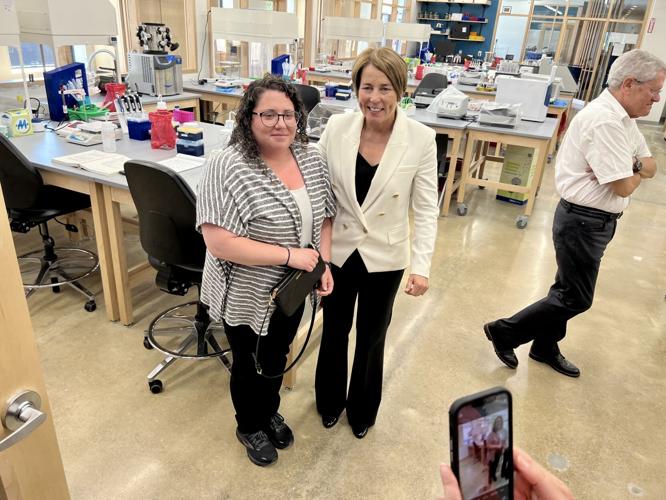 After about a half an hour, she and other officials took short drive to GMGI’s Gloucester Biotechnology Academy on Blackburn Center which trains young adults from Gloucester and elsewhere how to be skilled lab techs in the biotech field without the need for a bachelor’s degree.

In city known for its fishing industry, maritime history and beaches, Healey said she was not surprised by what she saw.

“I think it is really inspiring to see what’s happening both at the academy and at the institute, and it’s meeting the moment,” Healey said. “We have a real need to support a life sciences industry in Massachusetts as well as workforce development and it’s just a perfect marriage.”

The roundtable visit at GMGI highlighted the work of the institute, which officials said has taken a unique genomics approach to studying the oceans, looking for applications for the fishing industry and human health while seeking to build a biotech cluster outside of Cambridge.

“It’s really our goal of the research is to build on this amazing 400 years of maritime history, and really spark a new era of marine exploration, marine innovation and marine commerce,” said Andrea Bodnar, GMGI’s science director.

Healey and her chief of staff, Gabrielle Viator, a graduate of Gloucester High, met with some of those who brought GMGI to life nearly 10 years ago and those who run it today:

Ferrante acted as an emcee as she explained to Healey how GMGI and the biotech academy came about.

“I know that Ann-Margaret has talked about this for a long time so I was really happy to be able to come and visit along with Gabe, of course, to see all of this,” Healey said.

Tarr noted for Healey one of GMGI’s first benchmarks was to sequence the genome of cod, “and that has huge ramifications for the way we manage the fishery.”

Bolzan said the goal of GMGI is to drive economic development on Cape Ann and be a model for others here in the Bay State and elsewhere.

“The state has been a pivotal partner in all of this,” Bolzan told Healey. “Ever since the very beginning, we’ve received almost $5.5 million in commitments and investments from the state to date.”

A short drive later, Healey toured the biotechnology academy, where she met retired Biogen executive Joe Rosa, chairman of the Gloucester Board of Health who was instrumental in GMGI’s founding and is a volunteer instructor there; Education Director John Doyle, and a student who has just gone through the program, Tyngsborough resident Holly Randazza, who is originally from Gloucester and a Gloucester High graduate.

Doyle showed how they taught students like Randazza to take a green fluorescent protein from jellyfish, clone it into bacteria, grow the bacteria and then isolate that. The result was a flask of green glowing liquid. The skill set, Doyle said, is the same used to develop therapeutics.

The program has graduated 85 students in six years, Doyle said. More than half of every class is made up of students from Gloucester. Bolzan said they are doubling the size of the academy. This week they are graduating 15 students, but the goal is to graduate closer to 40 next year. It’s a 10-month program, seven months in the class and three in a paid internship. Bolzan said Randazza, who pivoted away from a career of real estate assessing, said she has gotten a full-time job offer from a biotech firm.

“It’s much more fulfilling,” Randazza said, “and actually a better impact on the world versus taxing people.”

“Congratulations, that’s great,” said Healey who said there are workforce issues across the industry. “In a space where we’ve been the global epicenter, we are going to lose that if we don’t figure out a way to fill the jobs.”

It's fiesta time! See our map, schedule of events, stories, and pictures from this year's St. Peter's Fiesta!