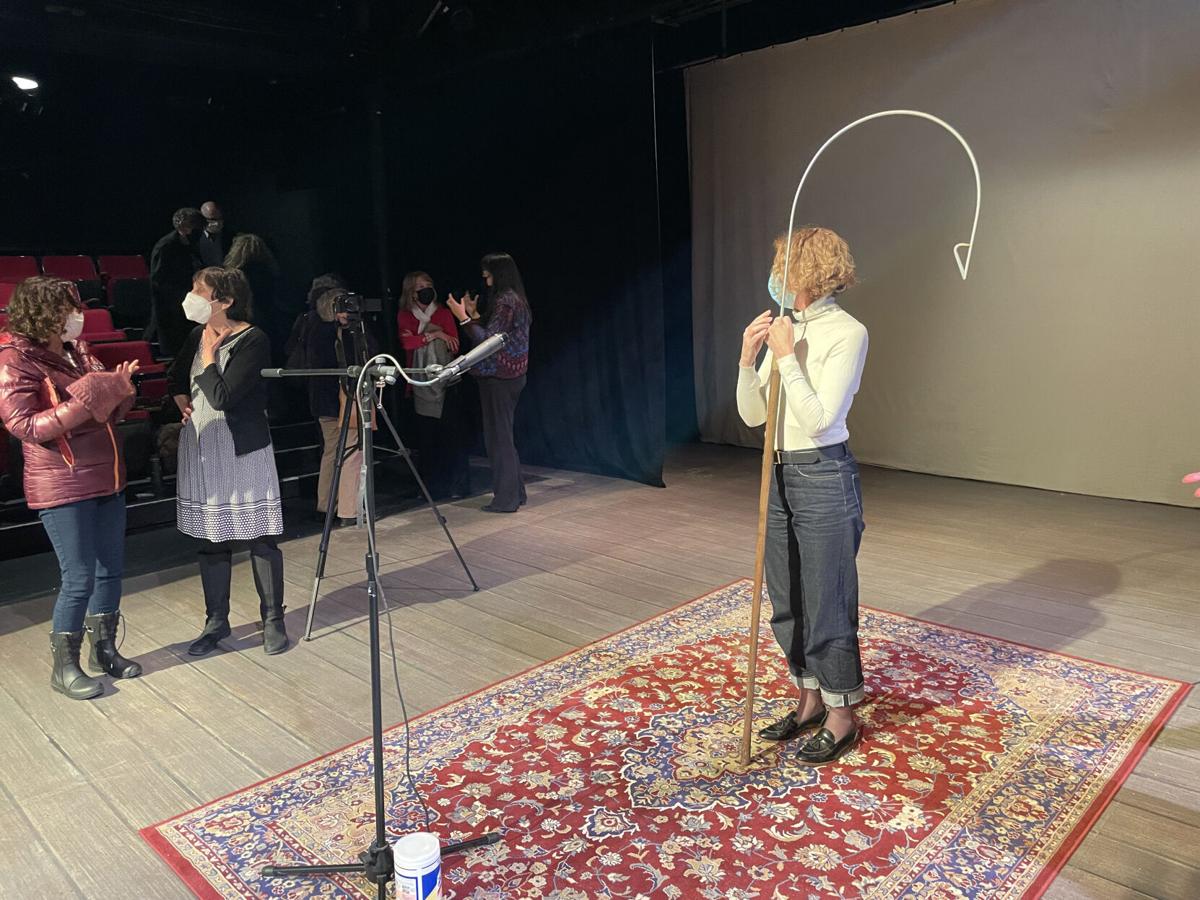 Gabrielle Watling, center, a literature professor at Endicott College, has been “hooked” to be the new storyteller-in-residence for the Gloucester Writers Center’s Fish Tales program, now celebrating its tenth year. 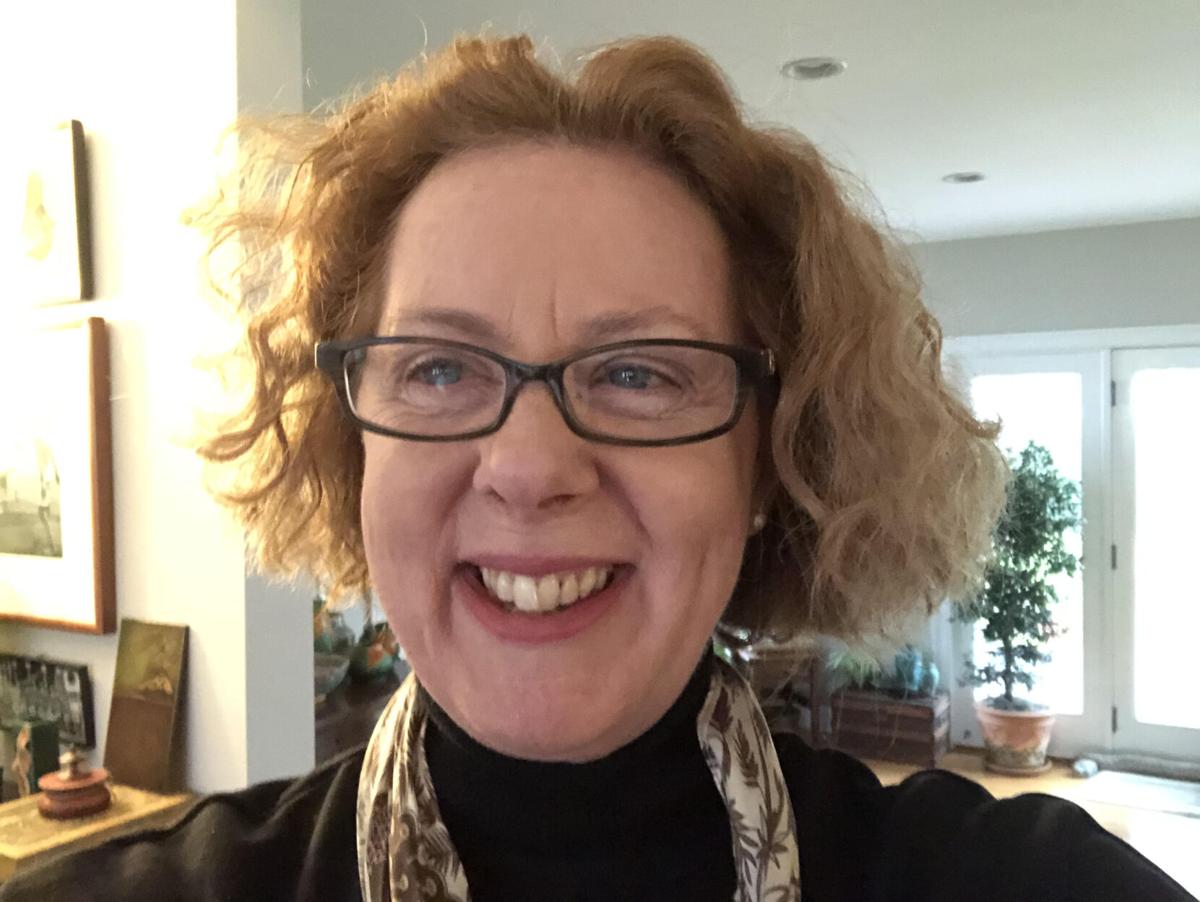 Gabrielle Watling is the new new storyteller-in-residence for Fish Tales, a program now in its tenth year at the Gloucester Writers Center.

Storytelling, which is as old as mankind, is celebrated regularly with Fish Tales, a popular program of the Gloucester Writers Center.

Now in its tenth year, Fish Tales has a new storyteller-in-residence, Gabrielle Watling, a Fish Tales fan herself.

A Beverly resident and literature professor at Endicott College since 1999, she came to the North Shore from North Queensland, Australia, where she earned a Doctor of Philosophy in post-Colonial fiction from James Cook University in Townsville, Australia. At Endicott, she teaches a variety of literary and honors classes.

Watling is also a fan of Cape Ann, having been introduced to it by colleague Charlotte Gordon, also an award-winning author.

“I’m in Gloucester all the time,” Watling said. “Gloucester is beautiful. Every bit of Gloucester is beautiful — the coastline, the city, the streets, the industry, the houses, the inlets, the marinas, the bridges, all of Route 127, Dogtown and everything in between. It’s all fabulous. I have more friends in Gloucester than anywhere in the world. It’s creative, it’s dynamic, it’s humble, it’s authentic. There is no place that I have ever been that’s quite like it.”

With that love of this place and its diverse residents, Watling takes on this new role.

“Through Charlotte, I met all sorts of creative people, including Phoebe Potts and Laila Goodman, and both have been involved with Fish Tales,” she said.

After attending a few Fish Tales events, Watling was persuaded to tell a story focused on the theme of “boundaries.” She shared a tale about incident when she was a “naïve 17-year-old who inadvertently crossed a boundary that should not have been crossed,” related Watling.

Fish Tales began under the direction of Maureen Aylward, a former Writers Center board president. Since its debut on Jan. 17, 2013, it has since become the center’s most popular program as it continues to grow and attract sell-out crowds.

As the program evolved, a storyteller-in-residence was established. This storyteller would share a story of their own as well as work with other storytellers to “hone” their tales. The first to be “hooked” into this new role was Phoebe Potts, who passed the role on to Casey Breton and in turn it went to Laila Goodman.

Henry Ferrini, a founding member of the center, applauded the efforts to keep it going even during the pandemic. He also filmed the events so that anyone can get a taste of Fish Tales at any time while viewing from the comfort of one’s home.

So when frigid winter conditions hit, one only has to pour a hot beverage or one’s libation of choice, and click onto “Fish Tales” at the Gloucester Writers Center website, gloucesterwriters.org. The next program likely will take place in the spring.

“It was a mixture of fabulous unique stories with the real community feel of Cape Ann. It really was the best of Cape Ann with people sharing authentic honest stories that mattered,” she said. “And the stories came from all over the world and yet everything kind of came back to the wonderful comfort they got from telling a story in a local environment at a local event.”

She got the impression that many in the audience were repeat customers and likely had been storytellers themselves.

“But everyone becomes very focused as they listen. There are gasps and laughter and signs of recognition when people hear a situation they have been through themselves, or a location or a situation they are familiar with,” Watling said. “There is also an appreciation of the sense of community and warmth that Fish Tales brings to the audience.”

“I love the idea of each storyteller bringing their own interpretation to a show’s theme,” Watling said. “I’m intrigued by what we may hear on the topic of ‘alchemy,’ currently a favorite theme for 2022.”

In response to the Sawyer Free Library’s popular book list, chronicled in last week’s column, one local reader wanted to share the title of a “very well-written historical novel that begins in the early 17th century England but eventually winds up in New England.”

The book is “Exploration: The Stanfield Chronicles,” by David Tory, which tells through the eyes of a young sailor of the explorations that preceded the arrival of the Mayflower in New England in 1620.

“Retired from his careers in the computer industry and philanthropy, David Tory has spent the last few years researching the arrival of English colonists in New England. ‘Exploration: The Stanfield Chronicles’ is the result of those years of research, following the fictional Isaac Stanfield through a life of adventure in the early 17th century. Originally from England, for 30 years David Tory has called Essex County, Massachusetts, his home with his wife, Helen,” according to a posting on the Boston Athenaeum website.

The story describes events from 1613 to 1620, and is also “the story of Isaac’s coming of age in those turbulent times,” according to the author’s website.

Tory has another local connection, in that he started the Essex County Community Foundation in 1998, which he left in 2011. For more details, visit www.davidtoryauthor.com.

Due to the current surge in COVID-19 cases, Rockport Music is canceling its remaining January concerts. However, plans to proceed with the HD broadcasts at the end of the month are still in place at this time, but with reduced capacity. The staff note that this move is seen as a temporary break. For more information, visit rockportmusic.org.