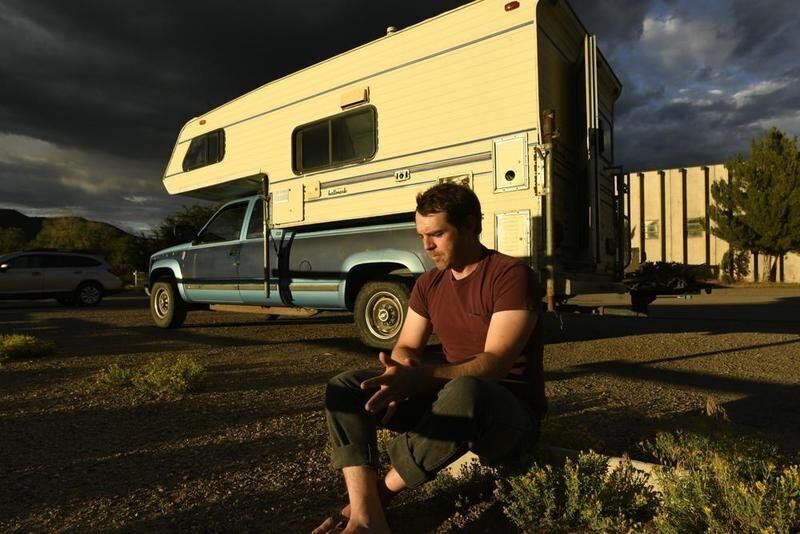 Associated PressAlex Eherenman, 35, sits outside of camper in Carbondale, Colo. Eherenman has lived in his truck-bed camper on and off since 2017 trying to make enough at his jobs while trying to save money so he can afford either a security deposit for an apartment or the down payment on an apartment come winter time. 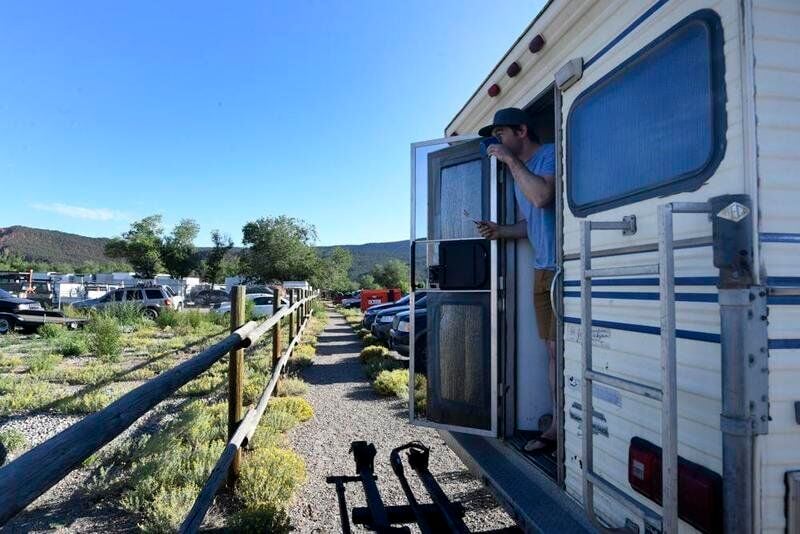 Alex Eherenman, 35, brushes his teeth outside of his camper before heading to work on July 1 in Carbondale, Colo.

Associated PressAlex Eherenman, 35, sits outside of camper in Carbondale, Colo. Eherenman has lived in his truck-bed camper on and off since 2017 trying to make enough at his jobs while trying to save money so he can afford either a security deposit for an apartment or the down payment on an apartment come winter time.

Alex Eherenman, 35, brushes his teeth outside of his camper before heading to work on July 1 in Carbondale, Colo.

DENVER — Standing inside a bucket he purchased last fall, Alex Eherenman bathed in his work bathroom. Water pooled at his feet as he splashed himself from the sink faucet, but at least he wasn’t leaving behind a puddle.

“That was a pretty low point for me,” Eherenman said, recalling the scene recently.

Eherenman, 35, doesn’t have running water in the truckbed camper he calls home along with his pup Nina. The duo curl up together somewhere new under the stars in western Colorado’s Roaring Fork Valley each night.

Eherenman’s new job as a bike manufacturer at least offers a shower he can use, but the inconveniences of camper living are beginning to weigh on him. He stashes what food he can fit in a cooler as a makeshift refrigerator. His beloved musical instruments live in a storage unit out of reach. To avoid raising the ire of local authorities, Eherenman is often on the move, searching for a new spot to park and get some sleep.

Most days, the concept of homeownership seems like a cruel joke to Eherenman rather than a feasible goal.

“I definitely didn’t envision this as my living situation as a younger person,” Eherenman said. “It was a little more fun when I was younger, but now that I’m in my mid-30s, it’s kind of a drag. It would be great to own a house someday, but to be perfectly honest, it feels completely unattainable.”

Eherenman is a millennial, that oft-maligned generation encompassing people who are now in their mid-20s to around 40 years old.

Researchers — and occasionally frustrated parents — note that millennials, some of whom are now creeping toward middle-age, are reaching milestones like marriage, parenthood and homeownership later in life than previous generations.

At pivotal moments in many millennials’ lives — high school graduation, college degree attainment, workforce entry — outside forces including the 2008 recession and its fallout, the student debt crisis and now the COVID-19 pandemic have stymied progress, stalling or altering the usual rites of passage of American adulthood, experts told The Denver Post.

One repercussion: Millennials are less likely than previous generations to own their own homes.

In 1982, 41% of households headed by people younger than 35 — the approximate age of baby boomers at the time — owned their own home, according to Pew Research. In 1999, 40% of Generation X-headed households in this age bracket owned homes. And in 2016, that number for that same age group dropped to 35%.

Millennials are better educated than previous generations, but they also have tuition costs and student debt unlike anything experienced by their predecessors.

Eherenman, who is hoping to save enough money to rent an apartment in the Roaring Fork Valley before winter temperatures creep into his camper, said most any homebuyer his age who he knows had financial assistance from their parents.

“It’s just a really stark sort of picture of the wealth gap that exists in this country,” Eherenman said. “I think about my time in college, too. There’s such a huge gap between people whose parents were able to pay for their college and those of us who weren’t and who are in tens of thousands of dollars of debt. It’s the difference between starting at zero and starting at minus $50,000.”

Eherenman hopes camper living will allow him to sock away money for an apartment security deposit in time to beat the rush of winter seasonal workers who are often priced out of mountain town housing, too.

The 35-year-old recoiled upon learning the cheapest studio apartment for rent in the new apartment building leasing in downtown Carbondale was going for $2,250 a month.

“It’s an unfortunate choice I’ve had to make,” Eherenman said. “Either I’m paying an exorbitant amount of rent or I’m mostly homeless and saving a little bit of money.”

Kimbrough acknowledged that older generations complaining about those who came after them is nothing new. But he noted there is a good deal of economic proof to help explain the difficult financial situations entangling millennials.

“There’s a lot of evidence that young adults are doing their best, getting more education than previous generations, holding jobs and paying a lot more for things that were cheaper for previous generations,” Kimbrough said. “I don’t think they’re worthy of any special complaints about their work ethic or other things people raise.”