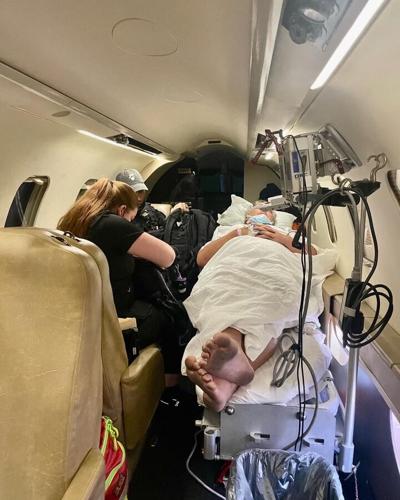 Scott MacDonald is flown to Miami on a medical flight on Sunday from Jamaica. 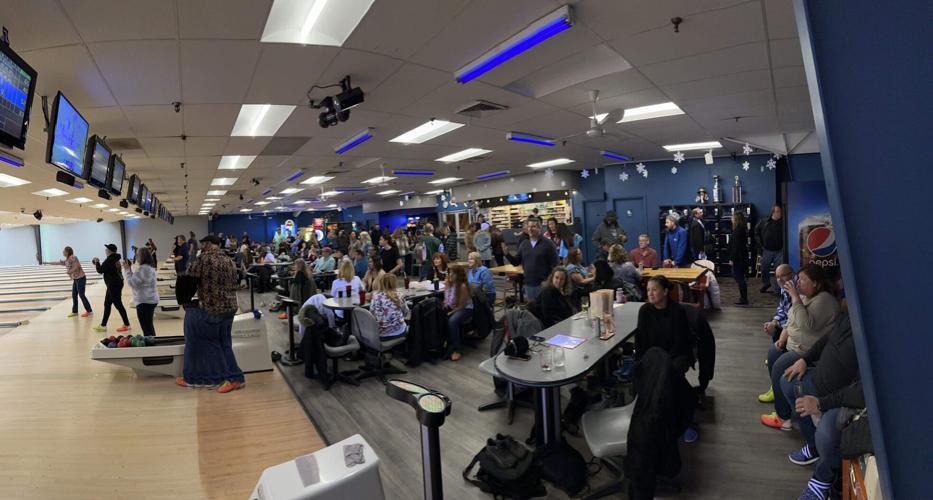 Cape Ann Lanes in Gloucester was packed on Sunday’s snowy evening when fundraiser for Scott MacDonald, injured in Jamaica, was held.

Scott MacDonald is flown to Miami on a medical flight on Sunday from Jamaica.

Cape Ann Lanes in Gloucester was packed on Sunday’s snowy evening when fundraiser for Scott MacDonald, injured in Jamaica, was held.

While Scott MacDonald, aka DJ Scottie Mac, is not physically back in Gloucester, Joey Ciaramitaro, creator of the Good Morning Gloucester blog, says his friend is not only recuperating in a Miami hospital, he’s seems like his old self.

Ciaramitaro said he spoke with his friend Monday and he appeared in and out of the conversation, probably due to heavy sedation.

But on Tuesday morning during a Facetime call, “he had 100% of his wit, so it was amazing,” Ciaramitaro said.

Later Tuesday, Ciaramitaro shared on his blog that his friend has a collapsed lung, broken clavicle and ribs, a nasal bone fracture, was suffering bleeding in the brain, and had a fractured skull.

“Basically the nurse said it’s a good thing he got here when he did,” Ciaramitaro added.

MacDonald, a popular DJ well known on Cape Ann and the North Shore, was reportedly injured in an scooter accident in a remote part of Jamaica sometime Jan. 9, according to Ciaramitaro, who used his blog to help get the word out about the plight of his friend.

MacDonald was flown from Montego Bay, Jamaica, to Miami on Sunday night and is being treated at Jackson Memorial Hospital, according Ciaramitaro and updates on Good Morning Gloucester. Those trying to get MacDonald stateside included state Senate Minority Leader Bruce Tarr of Gloucester and U.S. Rep. Seth Moulton of Salem.

“My team and I are extremely happy that Scott MacDonald is now receiving care back in the United States,” Moulton said in a statement. “We will continue to coordinate with his family and others to ensure his safe return home to Gloucester. I am grateful for the support of the Jamaican authorities as well as the U.S. embassy,” Moulton said. “My team is heartened by the amazing show of support from the Cape Ann community and beyond. The 6th District is a special place.”

Moulton’s office was able to expedite a passport for MacDonald’s aunt, Theresa Bunker, so she could travel to Jamaica to coordinate his move to Florida, according to Moulton spokesperson Sydney Simon.

Ciaramitaro said after the accident, his friend wound up in a hospital in the coastal town of Savanna-la-Mar and the extent of his injuries was unknown. He had to be medically assessed before he could be moved.

“I’m elated Scottie is in United States where he can receive the proper level of treatment,” said Tarr. He said each day there is a new development in MacDonald’s recovery “that shows the goodness and the generosity of people in the community.”

Tarr said noted he attended a packed fundraiser at Cape Ann Lanes on Sunday, Jan. 15, and the “the extraordinary act of kindness of Warren Waugh” who helped secure the medical flight and overcome a major logistical challenge of getting MacDonald to Miami.

Bunker and MacDonald’s girlfriend, Alison Gibeley, traveled to Jamaica on Saturday to be with MacDonald, and Ciaramitaro said they described the hospital as a “horror show.”

Ciaramitaro, who had been working with Chris McCarthy and Stephanie Tashjy to get MacDonald to the U.S. for treatment, said his darkest hour came Saturday night, when they learned they could not wire money to fly MacDonald out until the next business day, which because of the Martin Luther King Jr. holiday was Tuesday.

“He’s one of a kind,” Ciaramitaro said. A picture posted on Good Morning Gloucester shows MacDonald in a plane receiving treatment.

Outpouring in the snow

In the meantime, there has been a huge outpouring for DJ Scottie Mac.

“He’s coming home, baby!” Ciaramitaro shouted, raising his arms as he broadcast live from Cape Ann Lanes bowling alley on Gloucester Avenue during a fundraiser on the snowy evening of Sunday, Jan. 15.

They got word from his girlfriend “that Scottie Mac is going to be on a flight at 7:49 p.m. and we couldn’t be happier. It’s been a long road.”

Ciaramitaro went through a litany of giving that included the nonprofit Better Together for Cape Ann, Inc. raising more than $50,000 through its Venmo account. This does not count checks sent to an account at Cape Ann Savings Bank for MacDonald’s family.

Katelyn Ciaramitaro, Joey’s wife, and Caitlin Pszenny, co-owner and general manager of Cape Ann Lanes, said the fundraiser at the bowling alley came together in three days and attracted 80 auction and raffle items from the community.

“This community has been absolutely incredible with their generosity,” Katelyn Ciaramitaro said. “We are pretty confident we will hit $30,000 from that night alone.”

Patty Wall, president of the nonprofit Better Together for Cape Ann Inc. which started during COVID-19 to help those in need, said on Tuesday that through its Venmo account they had raised $52,940.

Wall said she saw the post from Ciaramitaro’s blog post and wanted to help. With about 8,200 members, Wall asked each one if they could give $10, figuring that if everyone did so, they could raise $80,000.

Wall said the black cloud has lifted knowing MacDonald is getting better care.

“We would do it for anyone in the community who reached out,” Wall said.

In addition to the above fundraisers, the AmVets Post 32 will be holding a Bingo night on Friday at 7 p.m. with proceeds going to MacDonald’s recovery, and the Beauport Hotel will be holding a fundraiser on Thursday, from 6 to 9 p.m. with a silent raffle with a prize of a weekend stay during St. Peter’s Fiesta.

Bernie MacDonald, the father of injured DJ Scott MacDonald, is expressing gratitude for the groundswell of support in Gloucester for his boy.