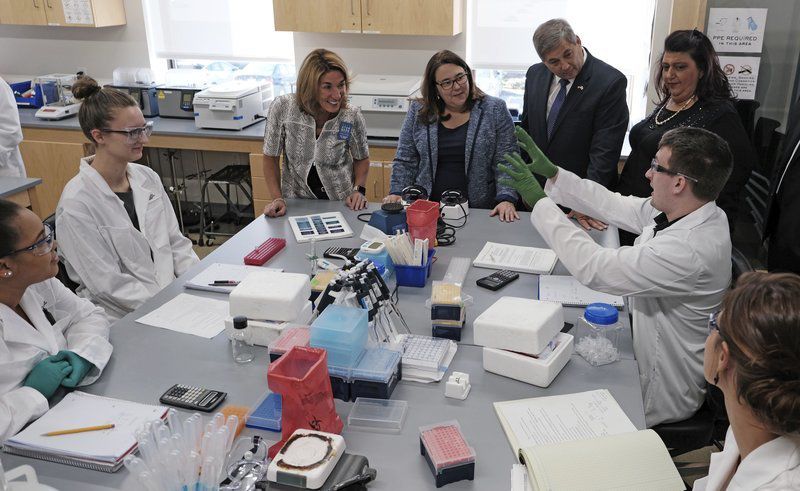 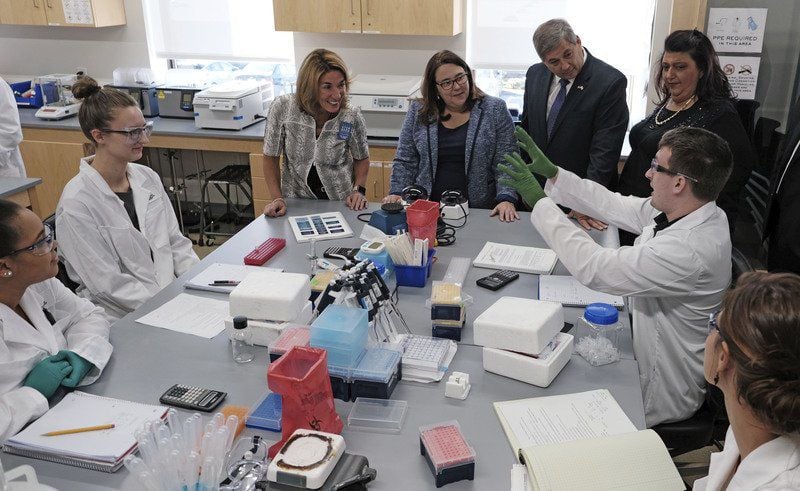 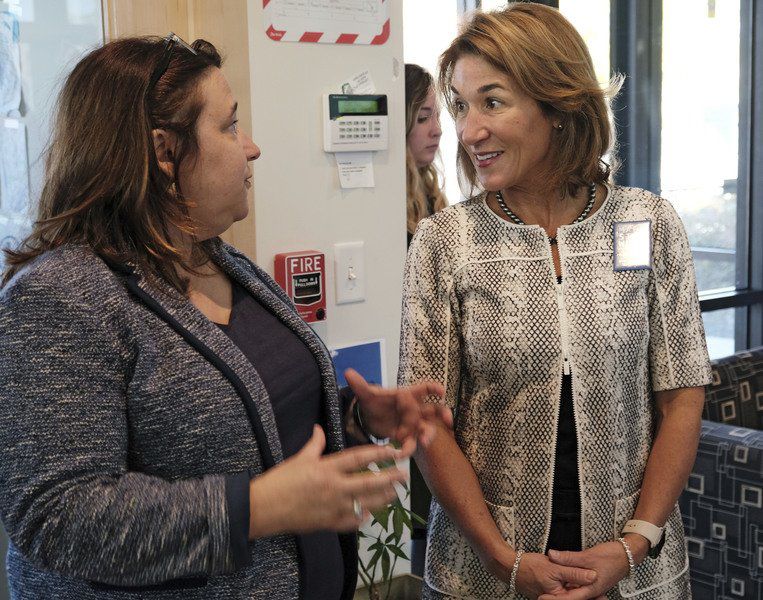 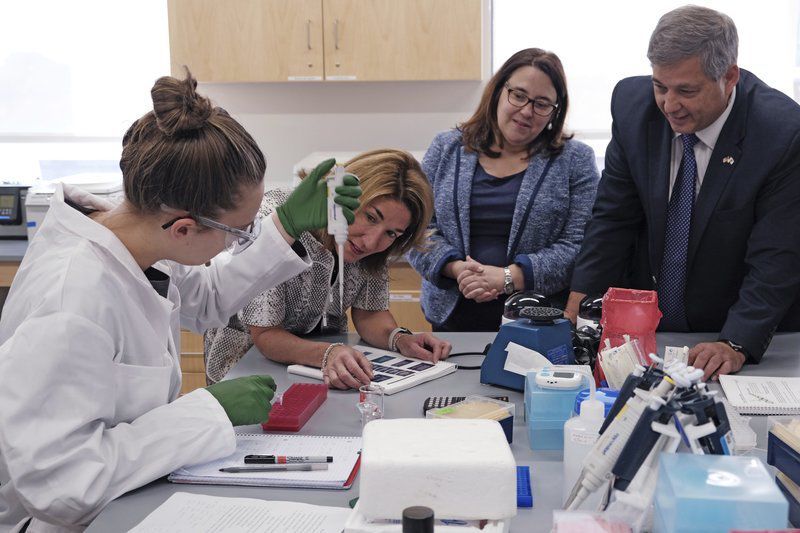 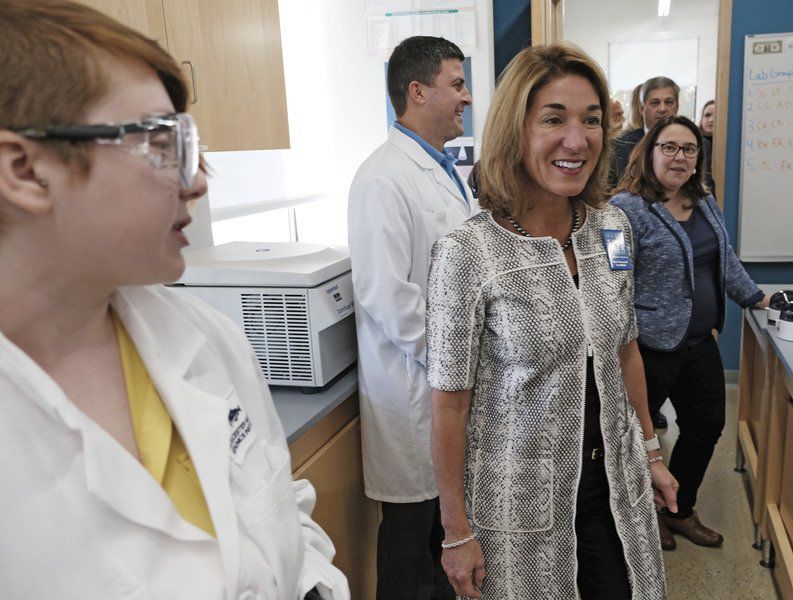 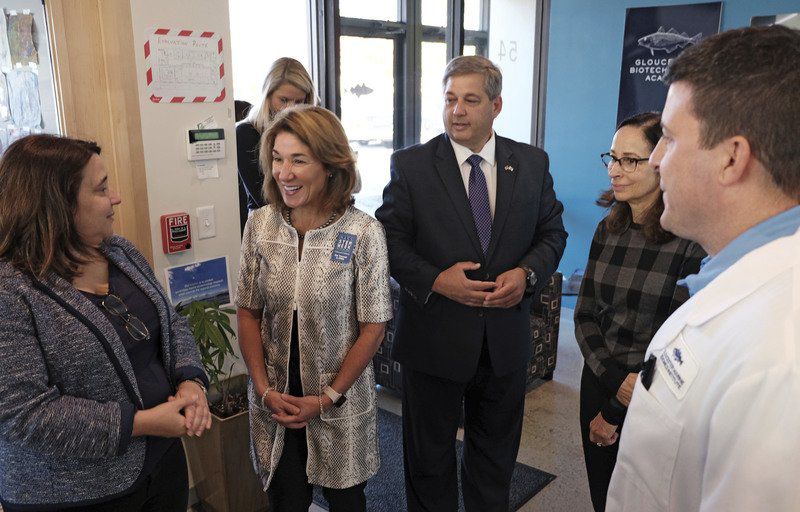 Timia Buckley of Gloucester was working with a squad of her fellow students Thursday in the laboratory of the Gloucester Biotechnology Academy when Lt. Gov. Karyn Polito stopped by the table for a chat.

Polito, who toured the academy and met the students as part of promoting STEM Week in Massachusetts, conducted her own survey course, navigating the lab table to solicit biographical details from each of the students.

What brought them to the academy? How did they hear about it? What did they like about the deep-water education in biotechnology and what did they plan to do upon graduation? Finally, what did they find difficult in their transition to biotech?

When it came time for her to answer the lieutenant governor's final question, the 22-year-old Buckley didn't hesitate.

"I was afraid to fail," she told Polito and other assembled elected officials, including Gloucester Mayor Sefatia Romeo Theken, state Rep. Ann-Margaret Ferrante and state Senate Minority Leader Bruce Tarr. "Now I know how to pull myself up when I feel like I've failed."

The comment was direct and unrehearsed. But it seemed to be exactly what Polito — not to mention the academy administrators and leadership at the Gloucester Marine Genomics Institute — had hoped to hear.

Four classes in and GMGI's educational affiliate in the Blackburn Industrial Park continues to elevate its own educational profile and its potential role as a template for developing a highly trained workforce able to meet the innovation economy head-on.

"Often times you think of Gloucester, a 400-year-old community and port, as being focused on commercial fishing, which is a really important industry," Polito said in a later interview. "But to see the extension of this into bio-science and life science is really transformational."

She went on to use that adjective several more time in discussing the academy and its potential.

The transformation, she said, also is at the center of the state's innovation economy and reflects an infusion of intellectual and professional advancement by providing career paths in biotechnology and other life sciences to students from Gloucester, Cape Ann and beyond.

"It's something that we're learning from and seeing how we can replicate," Polito said.

The lieutenant governor told the students that their program — so steeped in applied science and research — provides a road map for classrooms across the commonwealth through its emphasis on applied learning, its ability to replicate in the classroom those tasks awaiting them in the professional world and its ultimate umbilical connection to internships and jobs.

"We need more employers to open up their workplaces for internships, apprenticeships and mentorships so more students can take their learning and start working while they're still studying and have a job at the end of that experience," Polito said. "And a meaningful job in the innovation economy."

She said those are tangible benefits also accruing from STEM (science, technology, engineering and math) educational programs — including one that surely gets the attention those entering or re-positioning into the innovation economy.

"STEM jobs pay twice as much at the entry level than other jobs," Polito said. "The other piece that I'd like to highlight today was the diversity of this workforce."

According to academy Education Director John Doyle, the current class of 20 students reflects a trend toward more female participation at the Gloucester Biotechnology Academy.

"In our first two classes, I think we had a total of 14 female students," Doyle said. "In this class alone, we have 11."

The lieutenant governor said she was heartened to see so many female students in the academy class given the traditional paucity of females pursuing careers in biotechnology and other life sciences.

In Massachusetts, she said, 75 percent of the current STEM workforce is white, 26 percent of jobs in computer science and math are held by women and only 15 percent of engineering and architectural jobs in the state are filled by women.

"You have more women and more communities of color participating in the STEM experience," Polito said. "Clearly there's an opportunity to close that achievement gap."