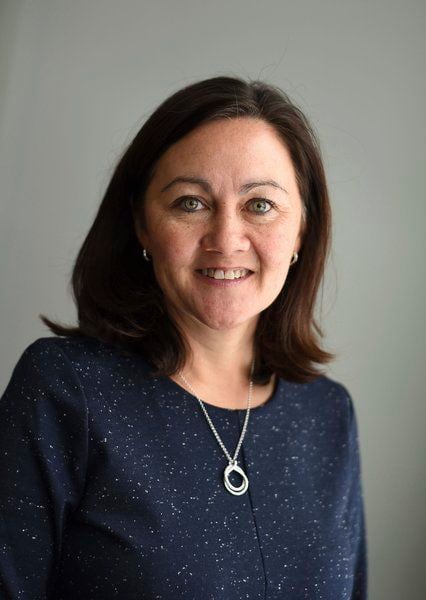 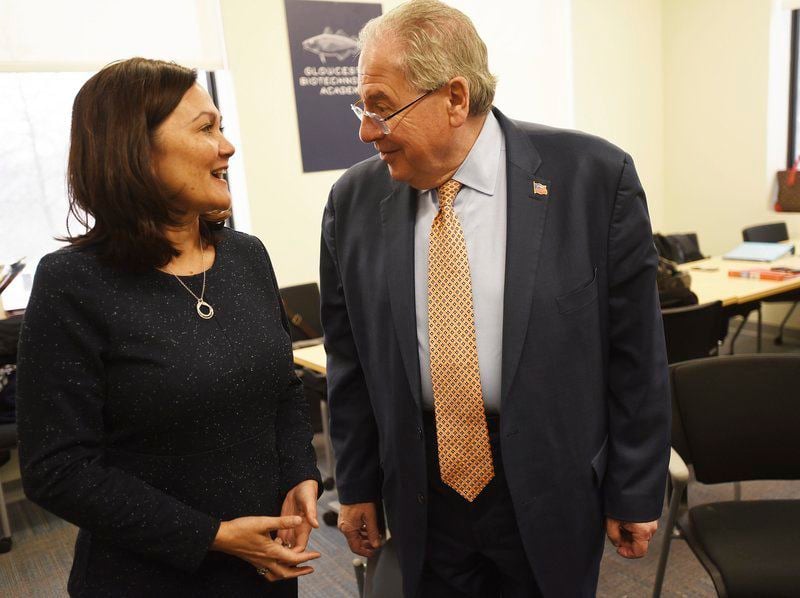 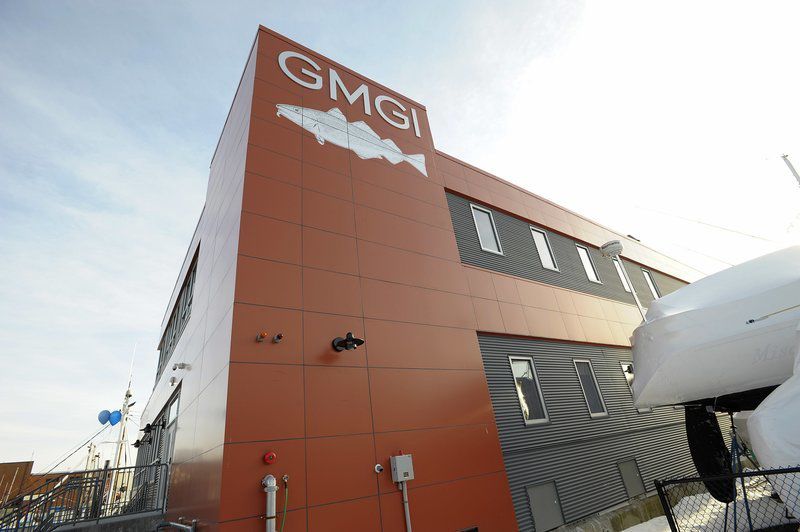 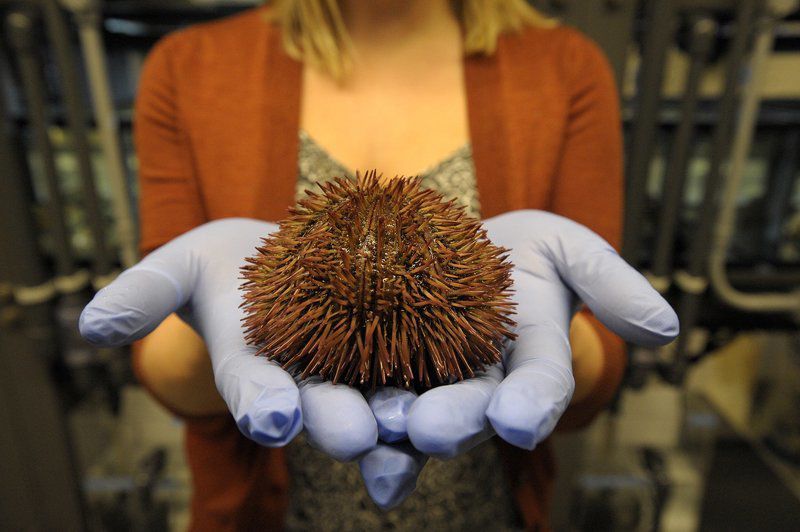 The interior of the Gloucester Marine Genomics Research Institute is dominated by so much glass that, at times, it feels as if you're standing in a giant snow globe. Glass walls partition conference rooms and offices, while large windows show Gloucester's working waterfront at the head of the ancient harbor.

On a blustery Friday morning in mid-December, with the skies and water competing with different hues of gray, Christine Bolzan sat working in her office. Now three months into her tenure as GMGI's chief operating officer, Bolzan intermittently lifted her gaze to the vista of the bustling North Channel.

And there she found her new best friend — the massive gray seal that for years has laid claim to the Inner Harbor as its home.

"I saw it three times," Bolzan said with unmitigated wonder. "I just looked out and there it was."

It's hard to believe Bolzan ever had a seal pop up outside her window at previous professional stops, which include Harvard Business School, where she was a leadership coach, the Sloan School of Management at MIT, where she was director of career education, her first finance job at the JP Morgan firm and, ultimately, her own startup company.

It is a welcome wagon that only a place like Gloucester might muster, a moment of marine wildness set in bas-relief to the everyday routine, its dissonance resonating toward the mythic and the unique.

And, if you wanted to unroll the ball of cosmic twine all the way, it just might be another sign that Bolzan is right where she's supposed to be.

"It's really been amazing," Bolzan said of her first three months working with the GMGI board of directors and staff of 19. "The team is fantastic. The bench strength is so deep. These are the hardest working people that I've ever met. And coming from investment banking, that's saying a lot."

She arrives at GMGI at a seminal moment in the six-year history of the research institute.

Its Gloucester Biotechnology Academy at the Blackburn Industrial Park, which graduated its third class in the spring, is flourishing in its mission to train a workforce of young technicians for the burgeoning biotech sector.

Meanwhile, GMGI continues to stretch its influence from the first floor of its glistening waterside headquarters on Main Street.

The institute's core task remains cutting-edge marine biotechnology research, but its leadership has been clear that part of the institute's mission is helping expand the regional economy in other ways.

GMGI is working with the city and the University of Massachusetts system to bring broadband to the Gloucester waterfront to handle the immense data loads produced by its research and the research of other biotech companies that may follow its path-finding journey to Gloucester.

The institute also hosts an annual science forum that attracts marine scientists from around the globe, some of whom, Bolzan said, now are talking about opening facilities here or nearby.

So, these are heady times for GMGI. And Bolzan, in her role as Chief Operating Officer, is right in the middle of helping shape the institute's future.

GMGI Chairwoman Michele May said Bolzan's primary role is to "provide support to the research effort and to make sure everything functions smoothly."

But that overarching description has several tributaries — finance, development, fundraising and establishing a culture that is as creative and nurturing as it is productive.

"The board members and staff that interviewed Chris were consistently impressed with her passion, her energy, her communication skills and intelligence," May said. "We couldn't be more thrilled to have her here."

Bolzan, 50, succeeds Chris Munkholm, who left the institute earlier this year to pursue other interests.

"Chris Munkholm was an incredible person to lead this organization through the initial phase," May said. "Chris Bolzan is going to be a great person to lead us into the next phase."

Bolzan said there are two areas of particular emphasis: Exploring avenues to expand both the class size and curriculum at the Gloucester Biotechnology Academy — possibly through the addition of bio-manufacturing — and developing a framework for the commercialization of the ideas emanating from GMGI's research.

"How does a research institute with 19 people total, four of whom work at the school, start spinning off commercial entities, creating frameworks for licensing and royalties and realizing revenues that we can reinvest in our research?" Bolzan said, framing the mission in the form of a question. "We don't have a tech transfer office. We don't have an innovation institute, such as a hospital like Harvard and MIT have. But we have developed a framework where we have the right support and individuals identified and already on board to help us to start acting in that manner."

She hit the ground running.

In her first 10 days on the job, Bolzan and John Doyle, education director at the academy, wrote a grant proposal for almost $1 million to build out a new level of research and classroom equipment as a prelude to adding bio-manufacturing to the curriculum.

"It would allow us to double the size of the classes (from the current class size of approximately 20) and help us grow, expand and reach broader communities," Bolzan said.

She also helped draft a proposal to GMGI's board, already presented and approved, to serve as a blueprint for monetizing the institute's research work, beginning in January.

"This is where my background kind of comes together," Bolzan said. "I have a little bit of knowledge about a broad range of topics that are relevant to bringing ideas and discovery to market."

Bolzan graduated from Wesleyan University in 1992 with a bachelor's degree in political science and government. She spent six years in the sharp-elbow world of Wall Street before leaving in 1998 to start a New York-based private equity consulting firm.

She later sold that business and spent the next several years focused on raising the three daughters — now aged 12, 15 and 17 — she shares with her husband Tony at their Boxford home.

In 2008, she embarked on her own startup company to help finance professional transition into private equity.

The company took off during the economic downturn of 2009. Bolzan wrote an article advising recent college graduates how to look for a job in a down market. The Boston Globe ran the piece. Three weeks later, NBC's "Today" show called and booked her.

"What I was anticipating was going to be a part-time entry back into the job market was (instead) a full company within a matter of months," Bolzan said. "I decided to go with it and see if I could change the way career development was executed on campus."

Her passion for education brought her into public service, volunteering in schools and serving on the Boxford School Committee for three years. It also dovetailed with her passion for STEM (Science, Technology, Engineering and Math) education and her work consulting for STEM startup companies.

And that's what ultimately led her to GMGI.

Jim Ellard, the CEO at Ipswich-based New England Biolabs and a Boxford neighbor, pointed her in the direction of GMGI when the institute was in its infancy. Ellard, who described Bolzan as "incredibly motivated and very strategic," later retained her to develop a mentoring program at New England Biolabs.

"I want you to go meet these guys," Ellard told her. "They're doing so many different things that I think you're interested in, like economic development, STEM, vocational training and interesting science."

She met with Munkholm and Doyle and stayed in touch as the GMGI seed germinated.

"I kept saying, 'God, I wish there was something I could do there'," Bolzan said.

Then the chief operating officer position opened. The job description alone, she recalled, was three pages long. As she went through it, she thought the twists and turns of her own career lined up well with what GMGI was seeking in its next COO.

"I called John Doyle and asked if they were ready to take applications," Bolzan said. "And it kind of went from there."