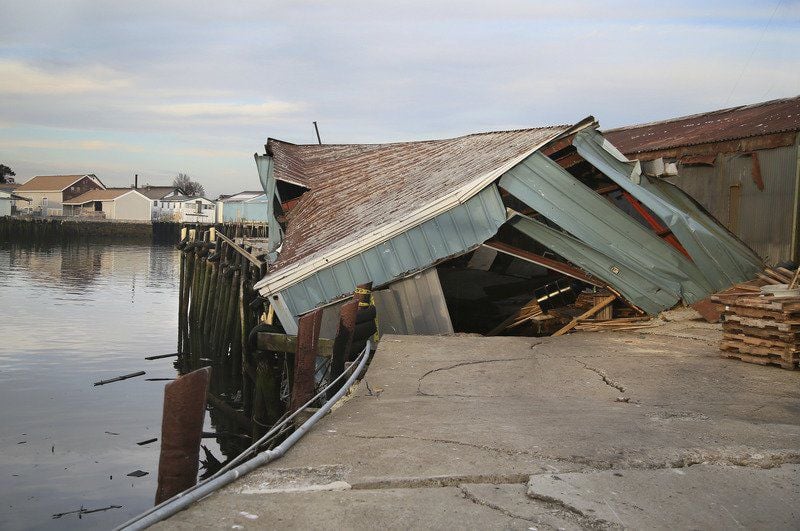 MIKE SPRINGER/Staff photoA warehouse leased by Channel Fish Processing sinks partly into Gloucester Harbor after the wharf collapsed underneath it Friday evening in the Fort neighborhood of Gloucester. No one was hurt. 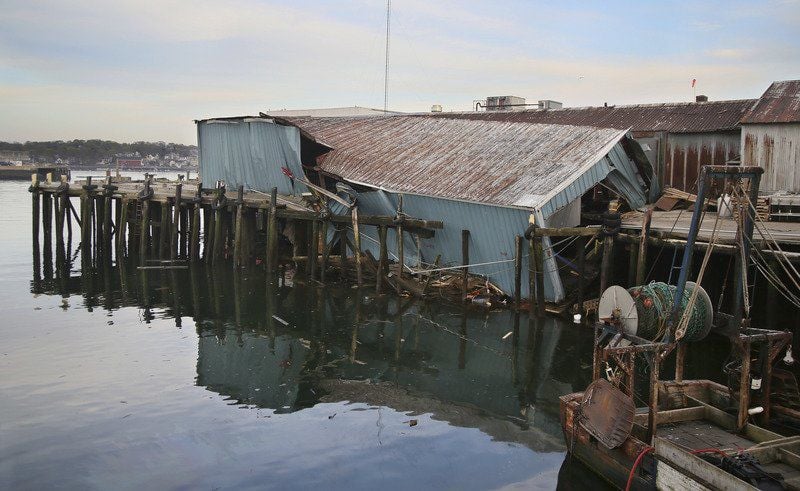 MIKE SPRINGER/Staff photoA warehouse leased by Channel Fish Processing sinks down to the waterline of Gloucester Harbor after the wharf gave way underneath it Friday evening in the Fort neighborhood of Gloucester.

MIKE SPRINGER/Staff photoA warehouse leased by Channel Fish Processing sinks partly into Gloucester Harbor after the wharf collapsed underneath it Friday evening in the Fort neighborhood of Gloucester. No one was hurt.

MIKE SPRINGER/Staff photoA warehouse leased by Channel Fish Processing sinks down to the waterline of Gloucester Harbor after the wharf gave way underneath it Friday evening in the Fort neighborhood of Gloucester.

Cape Ann Ice owner Scott Memhard was one relieved man last night as he stood surrounded by fire trucks off Commercial Street and surveyed the wreckage of a wharf — originally reported as his — that had collapsed into the Inner Harbor some 20 minutes earlier.

“It sounded over the scanner like it was ours,” Memhard said, although Cape Ann Ice’s wharf, located two buildings over, is in sound shape.

More reports came in that the collapse was at the old FBI Wharf, which became the North Atlantic Fish wharf, before North Atlantic was bought out by Channel Fish Processing in 2012. There was also confusion about the actual address; fire Capt. Tom Logrande said the storage building was likely 80 Commercial St. but Channel lists its address as No. 88.

Memhard said the collapsed wharf was leased from the Filetto family for storage by Channel Fish. LoGrande said Channel was aware of the wharf’s condition and had cordoned off it earlier in day, which Memhard confirmed.

“They knew it was at risk and were planning on moving to Braintree because of it,” said Memhard, shaking his head. “Then this afternoon they heard it creaking, and came and roped it off and moved some stuff out.”

They heard it creaking over at The Pub at Cape Ann Brewery at 11 Roger St., too, where at about 6:30 p.m. a deck full of patrons were drinking in the warm spring air along with the cold local brews.

Paul Veselka, a Varian employee who bicycled over to the scene of the collapse from the brewery, almost managed to capture it on his phone.

“We heard it creaking, and thought at first it was some old boat,” said an amazed Veselka. “Then we saw it buckle, then there was a big crack and crash as the pylons went and the whole thing just collapsed down into the water and all the seagulls went crazy.”

LoGrande said the wharf appeared to have collapsed first, and the building followed.

There was barely a breeze to be felt on the Inner Harbor at the time of the collapse, although the structure had obviously taken a cumulative beating from decades of storms. “Nope,” said Gloucester police Sgt. Joe Catarino, “nothing pushed it, unless you count the seagulls.”

Just down the street at the Beauport Hotel, smartly dressed guests seemed unaware of the commotion on the waterfront.

As the Gloucester harbormaster arrived on the scene, Memhard described the tough environmental cleanup that lies ahead.

“First, they’ll have to boom off the water to make sure no debris contaminates the harbor,” said Memhard, greeting Ward 2 City Councilor Melissa Cox, who arrived on the scene relieved, like Memhard, to discover that Cape Ann Ice’s wharf was still high and dry.

LoGrande said there was light oil sheen on the water, and an assistant harbormaster put out containment booms to keep it from spreading.

“I guess the good news,” said Memhard, “is that no one was inside when it went.”

Staff writer Joann MacKenzie may be contacted at 978-675-2707, or jomackenzie@gloucestertimes.com. Andrea Holbrook contributed to this story.