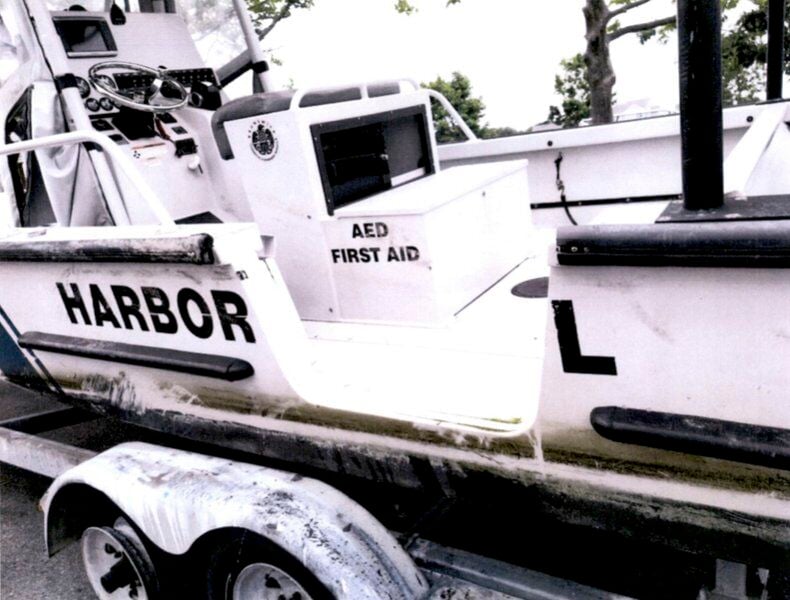 A photo showing the missing dive door on the side of the harbormaster’s patrol boat after it capsized and was salvaged. 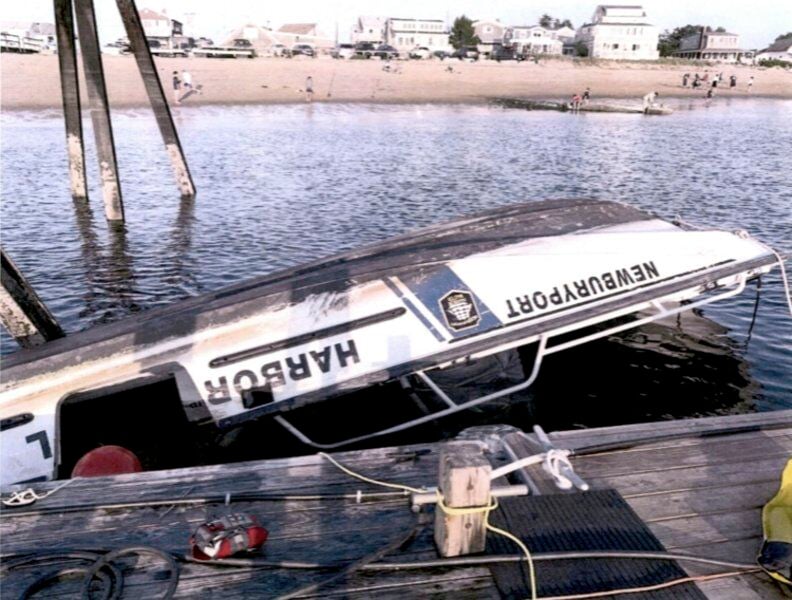 Courtesy photoSA photo included in documents released by the city to The Daily News under a state Public Records Law request shows the overturned 22-foot Whaler Guardian patrol vessel before it was righted and towed to shore for salvaging.

A photo showing the missing dive door on the side of the harbormaster’s patrol boat after it capsized and was salvaged.

Courtesy photoSA photo included in documents released by the city to The Daily News under a state Public Records Law request shows the overturned 22-foot Whaler Guardian patrol vessel before it was righted and towed to shore for salvaging.

NEWBURYPORT – The harbormaster’s Boston Whaler that capsized off Plum Island Point this summer — putting its two crewmen through a harrowing experience in choppy waters — was deemed a total loss by the city’s insurance company, according to documents.

The city, through its insurance company, will receive $82,365 in settlement money, say the documents, obtained by the Times’ sister paper The Daily News this week through a public records request.

The insurance company valued the city’s 22-foot Whaler Guardian patrol vessel at $83,365 and charged the city a $1,000 deductible.

Considering the city purchased the vessel 11 years ago for about $85,000, a figure that included radar, GPS tracking and other electronics, Mayor Donna Holaday said she was happy with the settlement.

Holaday said the money has not been paid yet but she does not expect any issues, calling it a “done deal.”

She said the city will purchase a replacement vessel before the next boating season and leave it up to Harbormaster Paul Hogg to determine what kind of craft would best serve the city. She also said money to purchase the boat would come from the city’s enterprise fund, fed by boating fees, and not cost taxpayers a cent.

“Oh yes, of course, we need one,” Holaday said, pointing to what was an extremely busy season with an uptick in boating accidents and incidents that required assistance from the Coast Guard and local resources.

Hogg said with the 2020 boating season in the books, he has ample time to do his homework and find the best deal for the city.

That homework includes reaching out to the state’s Environmental Police and the Coast Guard to determine if they have any surplus boats. Ideally, he would like a boat similar to the one lost.

“We did great with the insurance (company), they were really fair,” he said.

Hayden and his partner, Dave Willey, were pulled out of the water by Good Samaritans. Both men suffered minor injuries and were taken by ambulance to Anna Jaques Hospital.

In Willey’s accident report, which was previously obtained by The Daily News, Willey said he was trapped momentarily after the boat capsized.

“Once in the water, my PFD (personal floatation device) inflated and the boat landed on top of me, pinning me under the deck of the boat,” Willey wrote in his report to Hogg. “After releasing my right arm, which had gotten tangled in one of the lines, I reached the surface. I was helped out by Adam and five individuals.”

The boat was eventually recovered, pumped out, and towed to a nearby marina by a TowBoatUs crew at a cost of $5,250 to the city, according to the same trove of documents.

In an earlier interview, Holaday said that due to the choppy waters and strong current, the boat’s dive door became dislodged and the craft was flooded with enough water to capsize the vessel.

A witness placed blame on the pilot, saying he was driving recklessly in dangerous waters as he motored away from a dock. The witness said the operator did not back out gently, but instead gunned the engine and hit the dock.