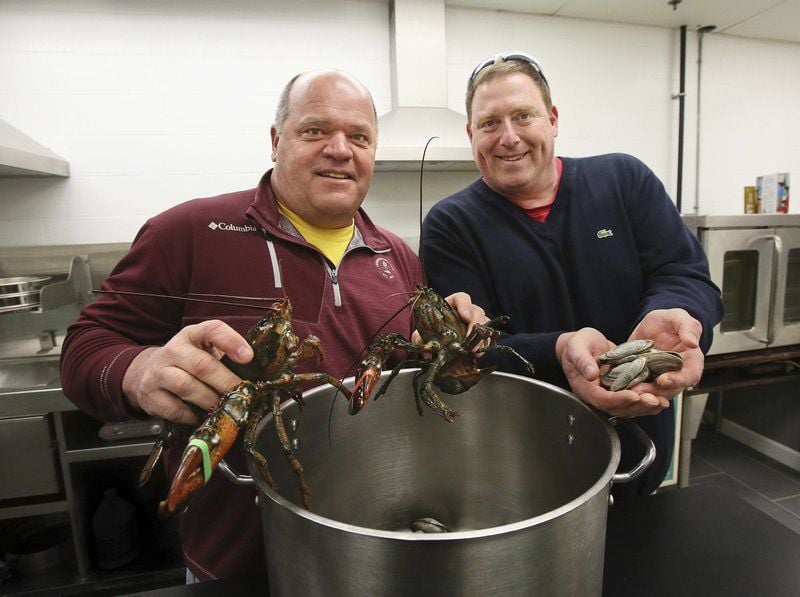 MIKE SPRINGER/Staff photoKeith Woodman, left, and Scott Weldon hold two of the chief ingredients -- lobsters and clams -- of their new catering business, Essex Clambake, which will open for business soon from a space in the Intershell building on Blackburn Drive.2/23/2018 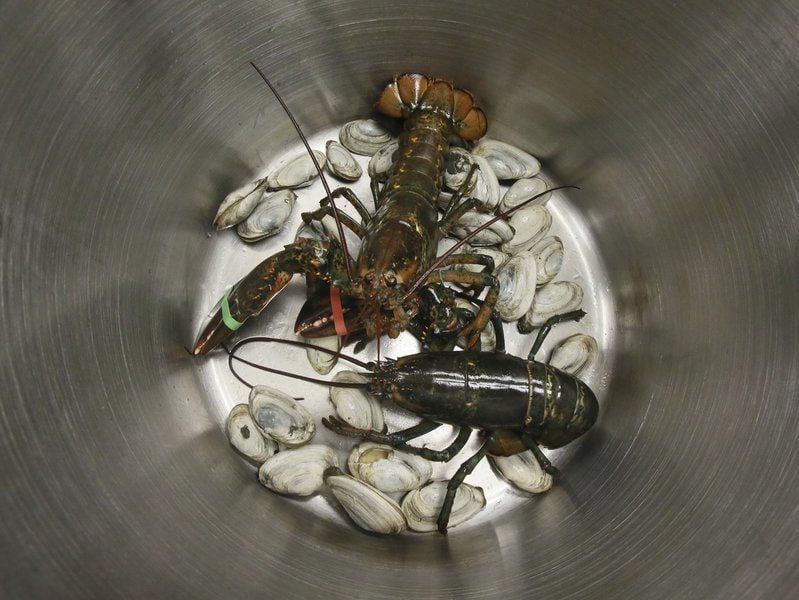 MIKE SPRINGER/Staff photoLobsters and steamer clams will be among the star attractions of the new catering company, Essex Clambake.2/23/2018

MIKE SPRINGER/Staff photoKeith Woodman, left, and Scott Weldon hold two of the chief ingredients -- lobsters and clams -- of their new catering business, Essex Clambake, which will open for business soon from a space in the Intershell building on Blackburn Drive.2/23/2018

MIKE SPRINGER/Staff photoLobsters and steamer clams will be among the star attractions of the new catering company, Essex Clambake.2/23/2018

A clambake is like sailing. You have no business doing it unless you know what you’re doing. And Keith “Woody” Woodman knows exactly what he’s doing.

Woodman's family, the famous Woodmans of Essex, have been doing clam bakes a lot longer. Back in 1914, when Woodman’s great grandfather Chubby Woodman — the inventor of the fried clam according to family and Essex lore — partnered with his wife Bessie to open their first little seafood shack on the Essex Causeway, it took one whole labor-intensive day on the beach to serve one up. And that’s not counting the prep time.

Woodman remembers digging holes, heating rocks till they radiated at 450 degrees, spreading seaweed, and cooking on bed frames a foot off the ground.  Things have changed since then, and though clambakes are still mighty labor-intensive, Woodman, who four years ago branched out on his own and bought a catering business, Ipswich Clambake LLC, has with practiced timing and team work, got his down to an art and science, on high summer weekends handling "as many as 5 to 10 on Saturdays alone."

He's been digging clams on the Essex flats since he was old enough to hold a clam fork, and when he wasn’t out clamming, he’d be working for his uncle Dexter Woodman at the Essex landmark eaterie. "I'm a Woodman. I'd get up, go clamming, go home, take a shower, and go to work at the restaurant." Over the years, he did everything from pick up trash to fry clams to tend bar. Skills that made Ipswich Clambake LLC more than double sales volumes over those four years.

With annual sales hitting steadily over the million mark, he guesstimates his Ipswich company did “maybe 3,000 clambakes,” from North Shore backyards, to a Las Vegas hotel, from private birthdays for 25, to huge corporate functions for 500, and everything in between.

And he still finds time to hit the clam flats most mornings.

The morning he talked to the Times he was out on the Essex flats, “digging the tide” for what, by noon, would amount to a hundred pound haul of razor clams. “I hated clamming when I was a kid,” he says. “My mother would drag us out of bed at 4:30 a.m. and it would be hot and and we’d be out there with the bugs. I swore I’d never do it when I got older, but I’ve been doing it ever since whenever the tide is out.”

“Clams are in Woody’s blood,” says Weldon, "an old pal" who, as partner in the business brings his own pedigree to the table. The marketing brain behind nogginwear.com, he invented a new and successful apparel niche: customized subscription hats. Both Weldon and Woodman describe themselves as "people persons” but Weldon "has a brain for business." A born salesman, Weldon has big plans for their new catering venture.

A home in Gloucester

Those plans include Gloucester’s Intershell Seafood Corporation, where the new company is headquartered.

It was Monte Rome, Intershell’s CEO and another "old pal” of the partners, who suggested they bring their new business to Gloucester, sharing space with him at 9 Blackburn Drive. “I was telling Monte I was looking to make a change, branch out again,” says Woodman, “and he said, ‘why not come over here?’ I’ve got the space, I’ve got the commercial kitchen.” And, as one of the area's biggest shellfish wholesalers, Rome’s got what it takes for a whole lot of clambakes. Not just clams, but lobsters. Tons of lobsters, which are just as much a part of contemporary clambakes as clams.

But at the heart of every clambake, clams remain the all American New England big draw. They were at the heart of Rogers and Hammerstein's hit song from their iconic musical "Carousel," the lyrics of which read like a recipe for a clambake, except that in the "Carousel" clambake, the chowder was "codfish," where as Woodman serves up clam. "First comes the chowder," he says, "then the clams — half to a full pound per person — lobsters, corn, new potatoes, and anything else anyone wants from barbecue to strawberry shortcake and water melon."

"We do it all," says Woodman. And his favorite part? "The people. I love interacting with the people. One day it's corporate, next day a backyard family party. First thing I do is say, 'we're gonna take care of everything.' I tell my people, whatever you do, do it with a smile. If you can't smile, don't work for me."

Right now, the staff, which is making the move with Woodman, numbers "about twenty." That could change. Quickly. “I told Scott I want to have the problem that he brings in so much business that I have to hire new people.”

The partners, who launched their website, www.essexclambake.com, and social media pages in late February, told the Times that in just days they’d booked 12 gigs. “Our Facebook page alone got over 3,000 views,” says Woodman. Could they handle that many at an actual clambake? "With teams of five working, sure," says Woodman.

Joann MacKenzie may be contacted at 978-675-2707, or jomackenzie@gloucestertimes.com.