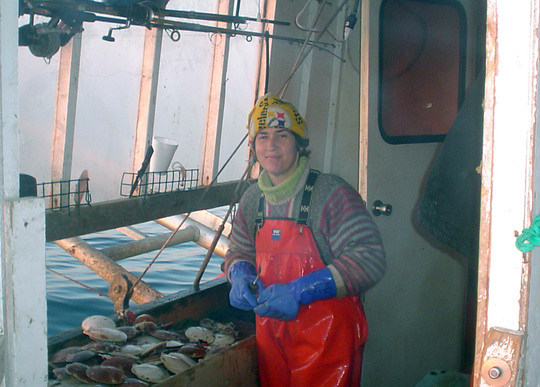 Courtesy photo Mary Beth de Poutiloff has been fishing up and down the East Coast for 21 years. 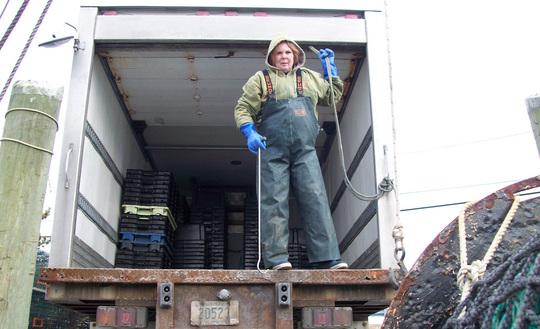 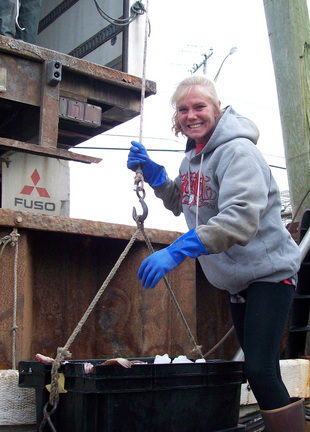 Tina Jackson, co-founder of the American Alliance of Fishermen and their Communities. Courtesy Photo 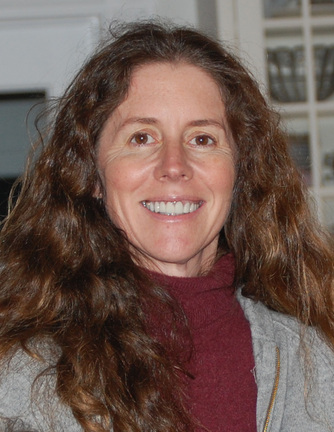 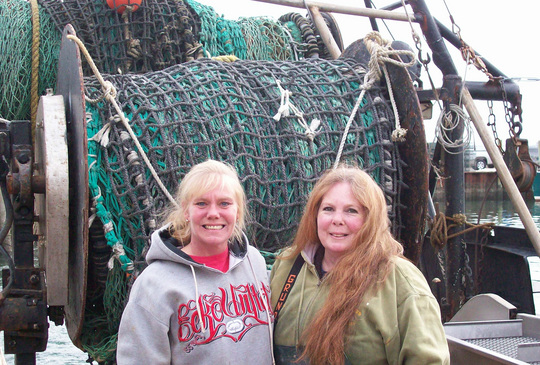 Courtesy Photo Tina Jackson, left, and Terri Farscone. Farscone runs Rhode Island Red Seafood, a fish brokerage , and calls the fishing industry’s current situation “an abomination.” Jackson cofounded the American Alliance of Fishermen and their Communities and helped it raise money to sue the government to stop the regulatory Amendment 16, which implemented the catch share system. 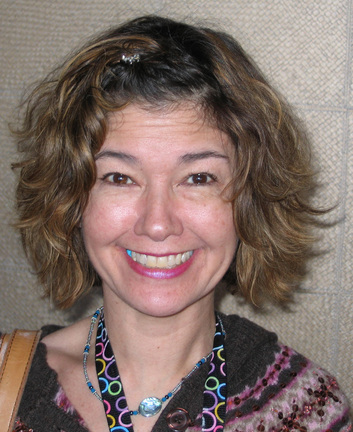 Courtesy photo Mary Beth de Poutiloff has been fishing up and down the East Coast for 21 years.

Tina Jackson, co-founder of the American Alliance of Fishermen and their Communities. Courtesy Photo

Courtesy Photo Tina Jackson, left, and Terri Farscone. Farscone runs Rhode Island Red Seafood, a fish brokerage , and calls the fishing industry’s current situation “an abomination.” Jackson cofounded the American Alliance of Fishermen and their Communities and helped it raise money to sue the government to stop the regulatory Amendment 16, which implemented the catch share system.

In 1977, 18-year-old Terri Farscone showed up at the Coast Guard station in Boston to apply for a 100-ton boat captain's license.

The officers on duty laughed and told her to go home. She was not amused.

Descended from three generations of fishermen, Farscone had been fishing for 10 years out of Gloucester and off Plum Island. At 12, she'd landed her first job as a mate on a charter boat. The same year, she caught an 800-pound tuna.

At 13, she was working on the rough-and-tumble Boston Fish Pier, skippering fishing parties. ("There was a little skipping of school involved," she admits now.)

So after being turned away in Boston, she tried again to apply for a license, this time at the Portland, Maine, Coast Guard station. There, she recounts, they gave her an application that said "Mr." on the line for her name. She crossed that out.

"They really didn't want to give me a license," says Farscone, who is now 51 and lives in Point Judith, R.I. "But I wouldn't let them intimidate me."

Indeed, at age 19, she got what they told her was the first 100-ton operator's license ever issued to a woman.

Today, of course, no such shenanigans would be likely, although women at that level of the industry remain rare.

In the past, they were nonexistent. Of the 5,368 names inscribed on Gloucester's cenotaph memorial to fishermen lost at sea, not one is female.

But that is not to say there aren't fierce female fishermen out there — the best known being Linda Greenlaw of "Perfect Storm" fame, who stopped captaining a Gloucester sword boat in 1997; she now lobsters and swordfishes periodically in Maine.

Most women involved in commercial fishing attend to the shoreside duties of the family business, although they will rig a line when they have to.

But many women are at the forefront of the movement against what fishermen view as government over-regulation and inflexibility.

Farscone runs Rhode Island Red Seafood, a fish brokerage she says she may to lose if the government's new fisheries management policy achieves one of its stated goals — squeezing out "a sizeable fraction" of the fleet, in the words of Jane Lubchenco, administrator of the National Atmospheric and Oceanic Administration.

"The scientists can categorize the fish, measure the catch, name the species, and all that," she says. "But they can't tell you how to get it."

The executive director of the Long Island Commercial Fisherman's Association is Bonnie Brady, of Montauk, on New York's Long Island.

Brady helped organize the "United We Fish" rally that brought some 5,000 fishermen and family members to Washington, D.C., in February to protest the federal government's treatment of commercial fishermen.

"We should be respected as a tax-paying industry, a lengthy line of independent family business that is being treated harshly," she says. "We need accountability for the regulators as much as the regulated."

Brady, now 47, equipped with a journalism degree and experience in the Peace Corps, says she wound up running a commercial fishing association by default about 10 years ago.

She was at an organizational meeting with her husband, Dave Aripotch, and sat listening as the fishermen "talked on and on like fishermen do."

"I stood up, grabbed the chalk, and said, 'OK, here's how to organize,'" she recalls now.

She's been running the association since 2000, on top of overseeing the shoreside business for her husband's 70-foot dragger — all the while caring for their two daughters.

"We're at a tipping point for the whole industry," says Brady, who operates as a citizen watchdog and ombudsman for the industry, monitoring and writing about political, regulatory and environmental developments.

The urgency that Amanda Odlin feels stems from her belief that fishermen are now "at the bottom of the barrel."

"There is nothing left to fork over, nothing to fear," she says, "and no way to go but up, with a unified front."

Odlin, 45, of Scarborough, Maine, organized a protest at NOAA's regional headquarters in Gloucester last fall and was a leader of the D.C. rally as well.

She studied speech pathology and psychology in college but came to the trade when she married Chris Odlin, a third-generation fisherman from one of Maine's leading fishing families.

She's been an onboard deckhand and driver on their two boats. But she is "land-based" now, immersed in paperwork.

Odlin, a mother of two, says she saw the current regulatory crisis "comin' at us like a lady having contractions before twins."

"It has spawned a lot of anger," she says.

"But enough of the belly-whining. We have identified the problem, come up with possible solutions and, if nothing else, through this rally, unified the people."

It's the misperceptions that get to Mary Beth de Poutiloff.

De Poutiloff has been fishing with her husband, John, for 21 years, up and down the coast, from Maine to Maryland, mostly for scallops. They and their son, A.J., 13, whom de Poutiloff home-schools, call several ports home.

De Poutiloff works as a deckhand, dumping dredges, sorting, shelling, cleaning and bagging catch in 50-pound sacks. She is also a prolific online voice of the fishermen's movement.

"Fish are at their second-highest historical levels. But they are cutting our permits in about half. It's all about government control over our ocean," says de Poutiloff, 50.

"In Provincetown, tourists come to the dock and see a skeleton fleet. They believe the propaganda and say, the fish are gone.

"A lot more women are speaking up now," says Tina Jackson, cofounder of the American Alliance of Fishermen and their Communities and an early advocate of the rally in Washington.

Her group helped raise money to file suit against the federal government to stop the regulatory Amendment 16, which implemented the catch share, or cooperative, management system. NOAA believes catch shares will thin the ranks of small-business fishermen but create a stronger fishery. Fishermen see the system as threatening their way of life while paving the way for a big business takeover of the industry.

Jackson, 43, was an exotic dancer at a Rhode Island club for 13 years. Capt. William "Buck" Briggs was a regular.

"We used to talk and talk a lot. One time, he asked me to help on an offshore trip," says Jackson, "and when I got back and saw my paycheck, I quit the club."

They now live and work together.

Jackson pilots their 48-foot dragger out of Point Judith, hauls the net and guts, gills and ices the catch.

Along the way, she has also mothered four stepchildren and two adoptees — and she does it all with long, red acrylic nails.

"I do as much hard-lifting as anybody," says Jackson. "But I'm still a girl."

Nancy Gaines, who lives in Gloucester, has been editor of two newspaper chains and four magazines, including the Improper Bostonian. She was founding editor of the Boston Business Journal and has reported for The New York Times and Boston Globe. She is now a publishing consultant and special projects writer, and is married to Times staff writer Richard Gaines.