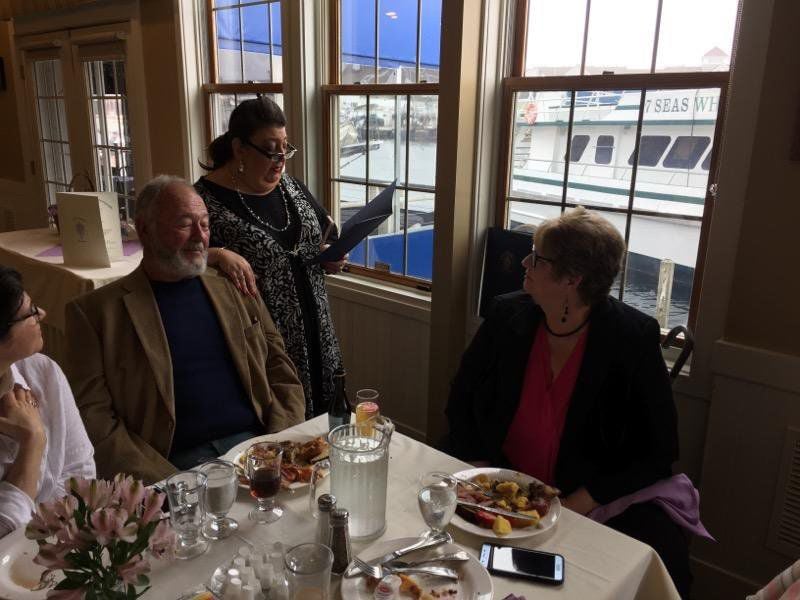 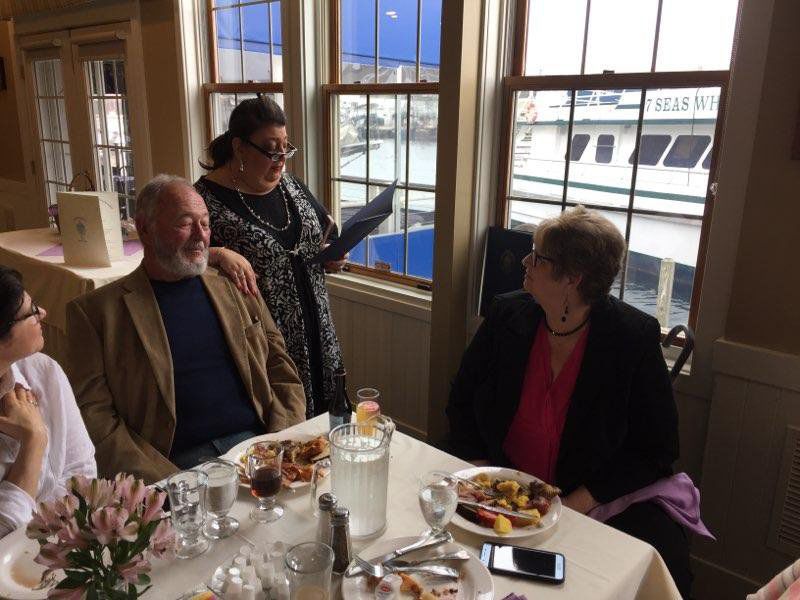 They threw a little party for Christine Sherman on Friday at the Gloucester House Restaurant, a little brunch with friends, family and colleagues, all of whom had collected to wish Sherman good luck upon her retirement from the Northeast Seafood Coalition.

The coalition was formed in 2002 and Sherman, the wife of longtime fisherman Russell Sherman, was one of the first ones through the door, first as a volunteer and later as a staffer extraordinaire.

"She served in so many capacities over 17 years," said Jackie Odell, NSC executive director. "She handled all of our membership duties and organized all of our fundraising, as well as handling all of our office management and administration. She is very engaging, very passionate and compassionate about fishing and the fishing community."

So, now Sherman will have the chance to take things a wee bit slower, if her high-rev motor will allow.

"I don't think she's just going to head off into the sunset," Odell said. "I think she'll remain engaged and continue to serve in some capacity moving forward. But for now, she just moving on to gardening this summer."

So, from the far-flung FishOn staff, good luck to one of the really good ones.

It seems all the news these days is wind and whales, which we guess is better than wind from whales. That's not a story you want to get behind.

"Basic scientific questions have not been addressed," the partnership stated in its release. "What are the impacts to New England's marine environment when thousands of turbines are pounded into the sediment and hundreds of miles of high-voltage cable run through fisheries habitat? What will happen to the lobster, squid, striped bass, tuna, flounder, cod, whales, sea turtles and other marine animals that migrate along the New England coast when their path to Massachusetts is interrupted by the noise and vibrations of hundreds of turbines? Who will be responsible when New Englanders lose access to local seafood and fishing grounds?"

The battle is only going to grow more divisive as the Vineyard Wind project and others ramp up.

The Gloucester Harbormaster office is spreading the word that it is accepting applications for kayak/paddle board racks now available at several waterside locations throughout the city, including Lanes Cove, Rocky Neck and the Magnolia Harbor public landing.

To cop a spot, visit the Harbormaster's mooring website at https://gloucesterma.mooringinfo.com to add your name to the list. The permits cost $100 and can be renewed annually.

Feeling innovative and a little lucky? Why not try your hand at the international Fish 2.0 program that celebrates innovations in aquaculture, sustainable fishing and sea technology while putting those innovators in touch with investors and customers.

The program has won wide acclaim as a launch pad for new ideas and new businesses, so get going. The deadline for applying is May 19.

You can find all the details about eligibility and qualifying criteria at the program website, www.fish20.org.

The state has come out with a new specialty striped bass conservation license plate that the administration of Gov. Charlie Baker said will generate revenues to support the conservation of saltwater fisheries through the Massachusetts Environmental Trust.

"Funds from the sale of this plate will be used to study striped bass, improve passageways for sea-run fish like river herring and eels, study angler practices to improve hook-and-release survival, and develop materials and programs to educate anglers about the importance of responsible angling strategies," the administration said in its announcement. (You can apply for the $40 plate here: http://bit.ly/2VDhHKI)

The plate was unveiled at the same time the state announced $471,512 in grants to 18 projects across the state — including $15,675 to Rocky Neck-based whale researcher Ocean Alliance "to use drones to assist in the disentanglement activities to provide a non-invasive, real-time assessment, reduce animal stress, and further our understanding of these events."

The new plate also was unveiled in the same week the Atlantic States Marine Fisheries Commission said it is working on rules to reduce the number of striped bass caught from Georgia to Maine by at least 17 percent because the stock is overfished.

What can we tell you. It's an imperfect world.

Speaking of grants, the state recently shipped out about $31 million in capital grant funding to help buttress the state's life sciences sector, including $174,383 to the Gloucester Marine Genomics Institute on the Gloucester waterfront.

The funds will be used to build and equip a new state-of-the-art cell culture laboratory at the institute's Gloucester Biotechnology Academy in the Blackburn Industrial Park.

So, bully for them.

What's in a name? Everything

Tyler Smith and Heather Brown are seniors at the Christ's Church Academy in Jacksonville, Florida. Last month, they accompanied their classmates to nearby Vilano Beach on their class's skip day when currents pulled them 2 miles from shore.

The two students said they were holding on to each other and praying for help when Capt. Eric Wagner and his crew motored by, spotted them and rescued them.

The name of the vessel: Amen.

Up a tree, out to lunch

Sometimes items cross our desk that, despite the absence of a true fish connection, still merit attention. And so it is with an unidentified man in Manchester, New Hampshire.

According to a story in the Boston Globe, Manchester firefighters were called out to assist the 30-year-old gentleman who got stuck 60 feet up in a tree while trying to retrieve — wait for it —his drone.

"A few times a year, we'll get people or the proverbial cat, but this is the first time it was a drone and a man," Manchester District Fire Chief Brendan Burns told the Globe.

Dollars to doughnuts, it won't be the last.

The man told firefighters that he had taught himself to climb the tree by watching YouTube videos on rope systems.