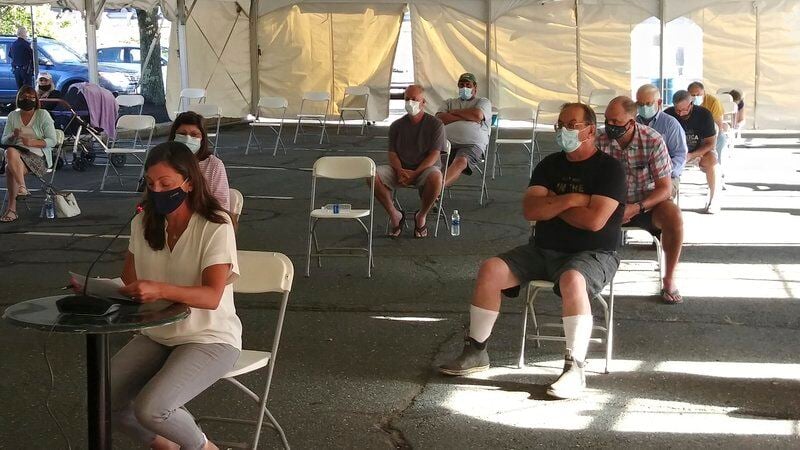 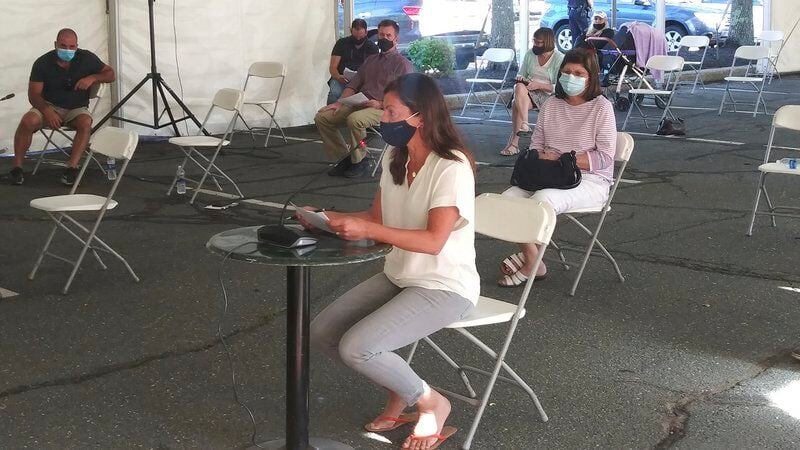 WAKEFIELD — The New England Fishery Management Council returned to a semblance of normalcy on Wednesday, holding its first in-person, public meeting of any kind since the COVID-19 pandemic struck about five months ago.

In some ways, the public hearing on Amendment 23 — the measure to set monitoring levels for Northeast sector-based groundfish vessels — was unexplored terrain.

The ninth and final public hearing on the measure was the first al fresco meeting in the history of the council. Capacity was limited to 50, but there was more than enough space. About 20 attendees joined a handful of council staff under the tent in the parking lot of the Sheraton Four Points hotel, next to Route 128.

Everyone was appropriately distanced and everyone was masked. The masks didn’t help with the audio and the dialogue was sporadically overwhelmed by 18-wheelers gearing down on the adjacent highway. But it was an actual, in-person meeting after what seems like a lifetime on webinars.

And as things got rolling, the meeting reverted to a familiar form.

The council, which expects to take final action on the amendment at its meeting in late September and early October, has selected putting monitors on 100% of all groundfish trips as its preferred alternative for accomplishing the goal of the amendment — improving catch accountability, maximizing the value of collected data and minimizing costs.

And the fishermen made their displeasure clear, skewering some of the data that was used to tabulate the estimated costs and benefits of going to 100% monitoring levels and flatly proclaiming that forcing the industry to pay for 100% monitoring would bring an end to the historic commercial fishery.

“The numbers you have up there make no sense to me,” said David Leveille, manager of the Gloucester-based Northeast Fishery Sector II.

“This will accelerate the expiration date of the fishery,” said Al Cottone, longtime Gloucester fisherman and the city’s fisheries director. “Once the federal money (which currently pays for at-sea monitoring) runs out, it’s over.”

“This amendment will put the final black mark on the industry,” said Angela Sanfilippo, the president of the Gloucester Fishermen’s Wives Association and a longtime fishing advocate. “It’s not fair to fishermen and it’s not fair to taxpayers.”

Gloucester fisherman Paul Vitale veered away from the data to talk about the simple act of fishing and how the constant presence of monitors aboard his 48-foot Angela + Rose will impact how he does his job.

Vitale said he mostly fishes alone and his priority is getting his catch off the deck and onto ice as quickly as possible to preserve the quality of the fish.

“Having monitors slows down our process,” Vitale said. “I’m talking fishing. This is crazy.”

The lone voice in favor of the measure was Gib Brogan, fisheries campaign manager at the environmental organization Oceana.

“Amendment 23 asks and answers the right question,” Brogan said. “The 100% alternative is the only one with a chance to do the job.”

The council expects to take final action during its Sept. 29 - Oct. 1 meeting. That meeting is set for the Beauport Hotel Gloucester on Commercial Street, but would be shifted to a webinar if the state’s indoor gathering restrictions are not loosened by then.

On that timeline, final implementation of the new rule would occur sometime in the winter/spring of 2021.