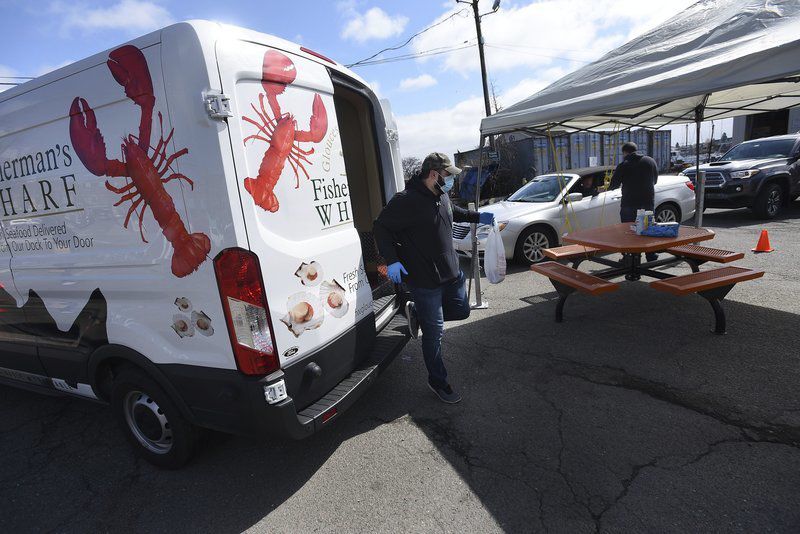 PAUL BILODEAU/Staff photo. Chris Giacalone jumps out a his van with a bag of scallops and fresh haddock at Fisherman's Wharf Gloucester's pop-up market on Rogers Street. 3/31/20 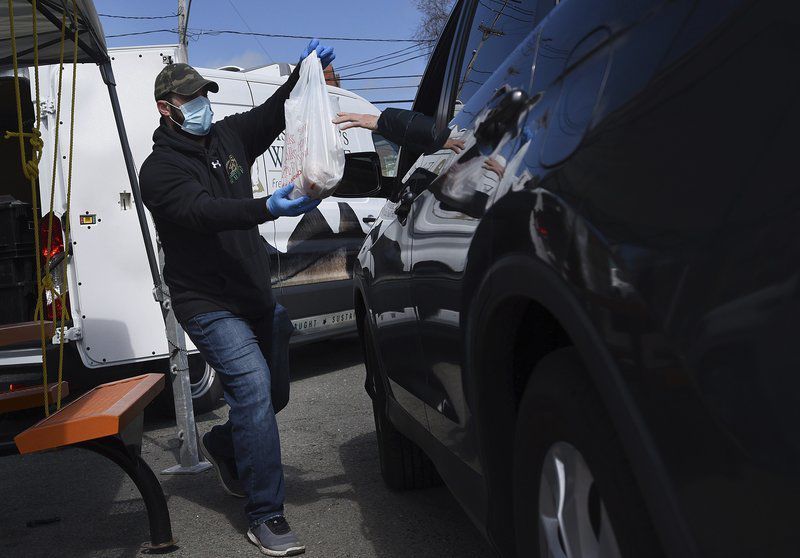 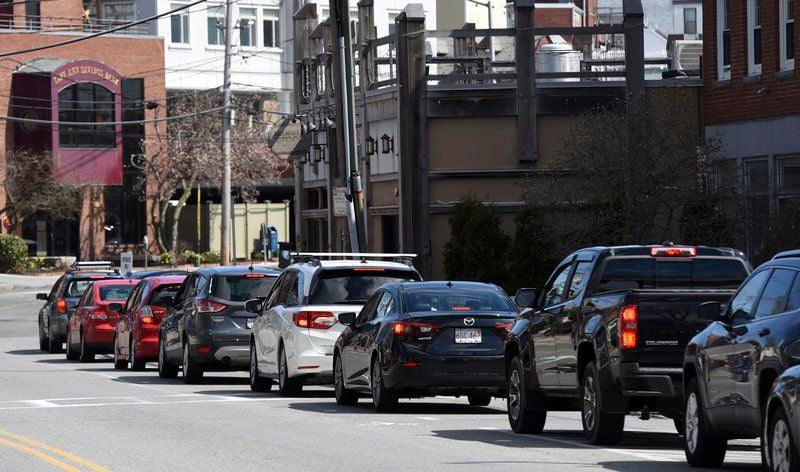 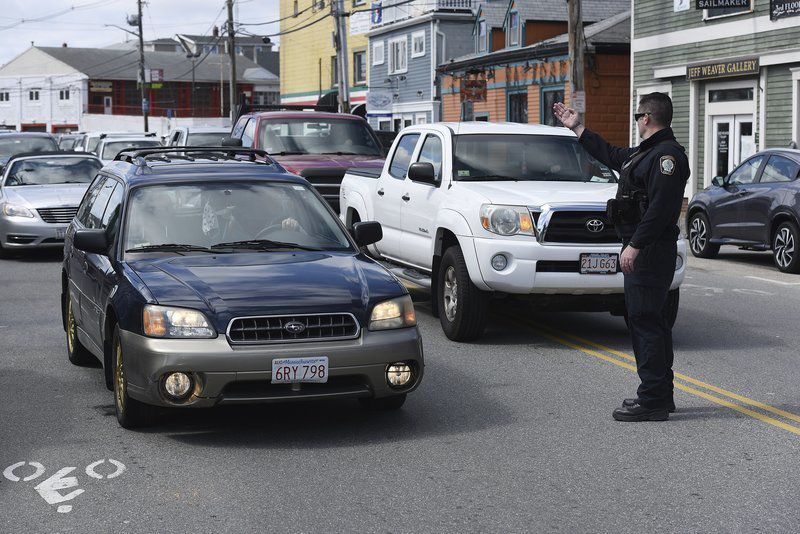 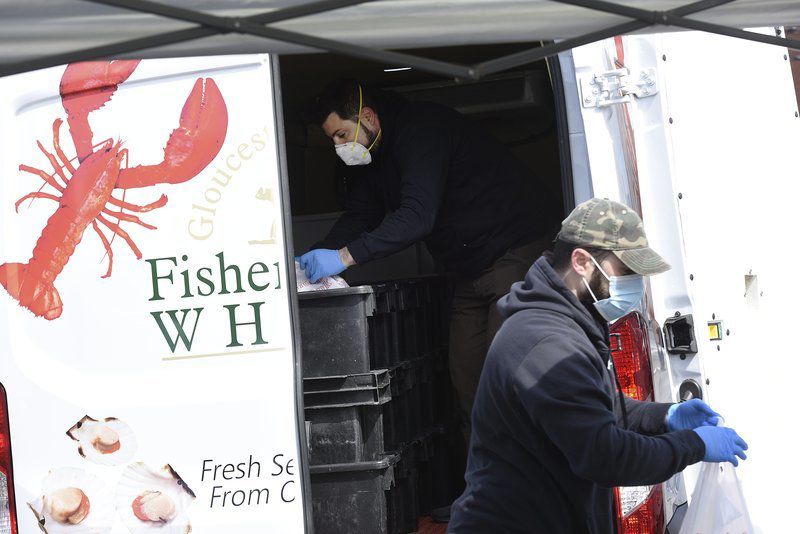 PAUL BILODEAU/Staff photo. Chris Giacalone jumps out a his van with a bag of scallops and fresh haddock at Fisherman's Wharf Gloucester's pop-up market on Rogers Street. 3/31/20

For weeks now, America's oldest commercial fishing harbor been a still life, perhaps not unlike what Samuel de Champlain experienced when he first sailed through in 1606.

The coronavirus pandemic has all but shuttered activity along the waterfront. Most fishing vessels sit at dock. The few souls still fishing lost their most lucrative market for live product two weeks ago when restaurants were barred, as a health precaution, from hosting on-site dining. Those seafood businesses that operate between the boat decks and the restaurant tables also became party to the misery.

But on Tuesday, something happened. Life returned to the streets bordering the ancient harbor. And in the spirit of Gloucester, it was all about fish, friends and neighbors.

For the second time in a week, the Giacalone brothers who run Fisherman's Wharf Gloucester, a wholesale seafood dealer, pushed back against the pandemic with an impromptu, al fresco fish sale that was more of a home run than a popup.

And now, because of the success of the first two popup sales, the Giacalone brothers hope to host similar sales on upcoming Saturdays until matters return to a semblance of normalcy. Check out the Fisherman's Wharf Facebook page for the definitive word.

"When (the health crisis) first started, people kept coming down looking for fish," Nick Giacalone said in between taking orders from vehicles rolling through the wharf's parking lot. "We thought it might get out of control, because we're not set up for retail."

The brothers talked about hosting an outdoor sale or even setting up a new service to deliver fresh fish and scallops to folks in their homes.

"But with the number of calls we'd already received, it would have taken us all day to deliver," Nick Giacalone said.

So the lads went with the popup sale centered on the idea of customers driving onto their lot and staying in their vehicles to adhere to safe distancing protocols.

Drivers would relay their order to the nearest Giacalone. The vacuum-sealed bags of fresh haddock and fresh scallops — two pounds of haddock fillets for $15 and one pound of scallops for $15 — would be delivered right to their car window.

Not really knowing what to expect, they promoted their Saturday popup fish sale — cash only, exact change preferred — on their Facebook page and waited to see what happened.

What happened Saturday was they sold out — 400 pounds of live product in 25 minutes.

Lining up for seafood

On Tuesday, Nick handled the orders and money from customers. Vito Jr. was in the truck with the seafood and Chris was the go-between.

Things ran smoothly. The only delays were when customers — many of them friends and neighbors — wanted to thank the Giacalones for hosting the event that ran until just after 5 p.m.

Serina Barr of Gloucester was still in the long line Saturday when the fish and scallops ran out.

"We just missed it," Barr said Tuesday. "I wasn't going to miss it again today."

Like dozens and dozens of others, Barr lined up early on Tuesday, well before the sale started at high noon. The line of vehicles ran back on Rogers Street and snaked along Commercial Street through The Fort neighborhood.

Traffic coming down Angle Street was backed up all the way to Middle Street and a collateral traffic jam back down Western Avenue reached almost to the Fishermen's Monument. The Giacalones said it stayed that way for the first two hours and then geared back into a nice steady stream.

And the people in those vehicles seemed, well, happy. Perhaps it was the early spring sunshine. Perhaps it was breaking containment for even a few moments to do something normal like going out to buy some fish.

Certainly, the prospect of having the very freshest seafood on their tables that night — the haddock fillets off the Miss Trish II and the scallops off vessels from the city's dayboat fleet — was part of the allure.

And there was this: It was a chance to safely escape the solitude of self-sheltering and be part of something beyond their own worries.

"I was born and raised in Gloucester and you can't do any better than this," said Kevin Philbrook as he advanced in the line. "Right off the boat."

Others, such as Sara Gray and Christie DaSilva, both of Gloucester, saw it as a win-win: Fresh seafood for them and business for the fishing industry that has been among the hardest hit by safety closures and restrictions in the campaign to stymie the spread of the virus and its spawned disease, COVID-19.

Len and Lenore Gambale motored over from Beverly to join the queue. The couple travels frequently to Gloucester during the summer, including regular Friday nights at Cape Ann Brewing Co. next to St. Peter's Square.

"We're absolutely here to help out the guys at Fisherman's Wharf and all the fishermen and businesses that have been hurt," Len Gambale said. "We'll come whenever they do this again."

The Giacalones have 15 employees and all have continued to work throughout the pandemic, even if it's at other duties, such as cleaning. The fish sales could help sustain that.

As always, some showed up Tuesday because someone told them they'd better.

"I'm here because my stepdaughter's half-sister's husband is part of this," Mark LeBeau of Gloucester said, motioning toward the Fisherman's Wharf facility. "When your family says you should come down, you come down because family rules."