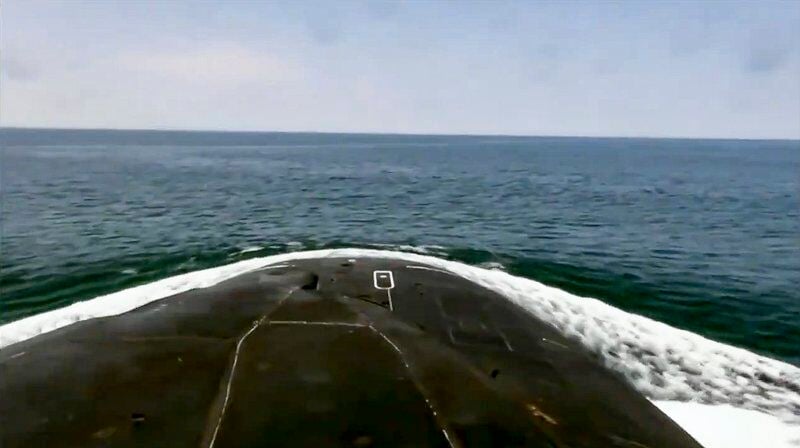 A Russian submarine surfaces during naval maneuvers in the Bering Sea in this undated video grab provided by Russian Defense Ministry Press Service. The Russian navy has conducted massive war games near Alaska involving dozens of ships and aircraft, the biggest such drills in the area since the Soviet times. (Russian Defense Ministry Press Service/AP photo) 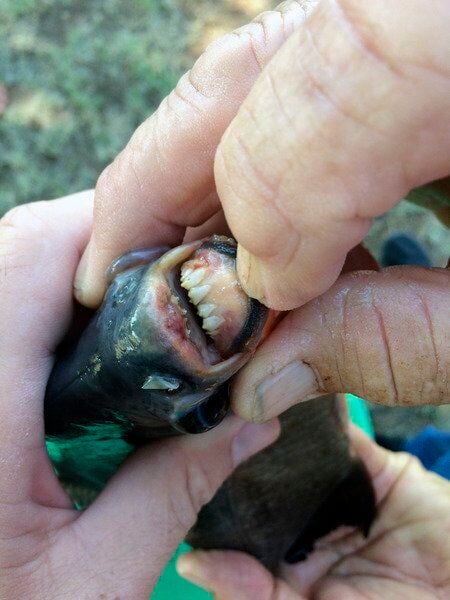 The teeth of a native South American fish known as a pacu caught in 2018 in a southwestern Oklahoma lake are shown. Another was recently caught in Tennessee. The pacu is considered an invasive species. (Tyler Howser/Oklahoma Department of Wildlife Services via AP)

A Russian submarine surfaces during naval maneuvers in the Bering Sea in this undated video grab provided by Russian Defense Ministry Press Service. The Russian navy has conducted massive war games near Alaska involving dozens of ships and aircraft, the biggest such drills in the area since the Soviet times. (Russian Defense Ministry Press Service/AP photo)

The teeth of a native South American fish known as a pacu caught in 2018 in a southwestern Oklahoma lake are shown. Another was recently caught in Tennessee. The pacu is considered an invasive species. (Tyler Howser/Oklahoma Department of Wildlife Services via AP)

The pandemic has kept us all closely tethered to home for the past five months, so it was nice for us here at FishOn to go over the bridge and up the line last Wednesday to cover an actual in-person event. No Zoom. No webinar. Just journalism in the great outdoors of Wakefield.

We covered the last public hearing conducted by the New England Fishery Management Council on the ever-contentious Amendment 23 — the measure to set future monitoring levels for sector-based groundfish vessels in the Northeast fishery.

The council, which is expected to take final action on the measure at its September meeting, did a good job of hosting the public hearing meeting under a tent in the parking lot of the Sheraton Four Points hotel.

Folks were masked and properly socially distanced. Capacity was 50 and about 20 fishing stakeholders attended the meeting, so there was plenty of room. Under the tent, it felt like junior high school detention (or so we understand) where they separate all the troublemakers as far apart as possible.

"It was a pretty big effort," said Tom Nies, the council's executive director said about a half hour before the scheduled start of the hearing. "The hotel was helpful. But we're still working on some details."

We asked him if returning to an in-person format felt akin to stepping back through the pandemic looking glass to a time when in-person council meetings might resume.

"No," Nies said quickly and directly. "I don't know that you can look at this as a real indication of returning to normalcy. Look at the size of the space we needed (for less than 50 people). And this is basically a two-hour event, not full-day sessions spread out over three days."

For now, the council's Sept. 29 - Oct. 1 meeting, at which the council expects to take final action on the monitoring amendment, is set for the Beauport Gloucester Hotel on Commercial Street. But unless Massachusetts relaxes its gathering restrictions, it's hard to imagine the three-day meeting won't be conducted via webinar.

Just the world we live in.

Angler Randall Adams was fishing on freshwater Rony Pond, not all that far from the mighty Mississippi River, when he yanked up something he'd never seen before. At the end of his line was a dingy-colored fish with fins on its belly and back and what appeared to be a mouth of human teeth.

Adams landed a South American pacu, which is a vegetarian relative of the piranha. Or so they would have you believe, right up until you invited them over for quinoa fajitas and things took a bad turn.

"Pacu grow up to 42 inches in length and can weight as much as 97 pounds depending on the species," according to the story in the Charlotte Observer. "They are delicious and often served in restaurants in South America."

The Tennessee Wildlife Resource Agency, which will never be as cool as the Tennessee Valley Authority in our book, speculated that the pacu was part of a private fish collection until it got too big for its living room habitat.

"Pacu are suitable for home aquariums, but grow rapidly and can live 15-25 years," the TWRA posted on social media. "So the odds are the fish outgrew its aquarium and someone relocated the fish to Rony Pond."

The coolest part? We went to school with guy named Rony Pond. And he had teeth like a piranha.

On this date in 1950, Dodgers first baseman Gil Hodges hit four home runs in a game against the Braves at Ebbets Field to become the sixth player to accomplish the feat. The question is a two-parter: Who was the last player to go deep four times in a game? And who is the only batter to do it in only four plate appearances? Answers are gloating while circling the bases below.

Fishermen. Our first line of defense

So, a big fortnight for the Russians. First, one of the leading domestic opponents of the Putin regime — an avocation which seems to be among the most dangerous on Earth — was poisoned and had to be flown out of the country for medical care and to make sure whomever did the dastardly deed couldn't finish the job.

Oh, but wait. On Wednesday, while Russia was conducting war games in the Bering Sea, one of its submarines inexplicably surfaced close enough to Alaska to send folks into a tizzy. And who sounded the first alarm? A group of commercial fishing vessels.

"We were notified by multiple fishing vessels operating out in the Bering Sea that they had come across these vessels and were concerned. So they contacted us," a Coast Guard spokesman said Thursday.

The Coast Guard got on the blower to the Alaskan Command, which seemed, kinda-sorta, to confirm to The Associated Press that it was tracking the Russian vessels.

"We closely track vessels of interest, including foreign military naval vessels, in our area of responsibility," a spokesman said.

Consider the life of a louse (not your ex): They're tiny. They're wingless. They're not only an insect, but a parasitic insect that spends each moment feeding upon the blood of its host. Maybe it is your ex after all.

Now comes word that at least one branch of the lice family — seal lice — may have something to crow about. It may be the only insect that can survive in the arduous marine environment of open ocean.

"Lice of the species Lepidophthirus macrorhini dwell on the rear limbs of (southern elephant seals), which spend nearly 10 months of the year in Antarctic waters and dive up to 6,500 feet below the surface in search of food and may stay under water for two hours at a time," the New York Times story stated. "These lice could be the deepest surviving insects in marine ecosystems, according to a study published in July in the Journal of Experimental Biology."

It goes on to say that within a few days of birth, adult lice are transferred from their mothers. The lice do what lice do, which is get down to it.

"The lice quickly reproduce, taking advantage of the initial weeks that pups are confined to land, as their eggs don't hatch under water," the Times story said.

Researchers still aren't sure how the lice survive, whether they have special adaptations.

"My guess is these guys just shut down and lock their tracheal system" said Stuart Humphries, an evolutionary biophysicist at the University of Lincoln in England.

In other words? They just hold their breath.

There have been 18 major league hitters with four-homer games on their resume, which makes the feat far more rare than throwing a no-hitter (there have been 304 of those). The last to do it was current Red Sox designated hitter J.D. Martinez on Sept. 4, 2017, while playing for the Diamondbacks. The only hitter to do it in only four plate appearances was Blue Jays first baseman Carlos Delgado, who did it on Sept. 25, 2003, against the Devil Rays.