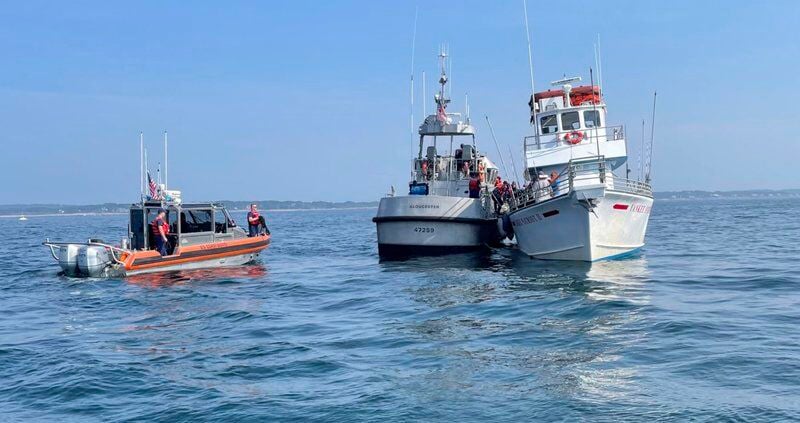 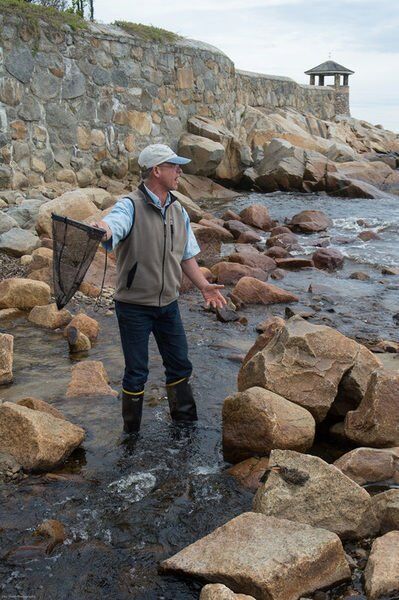 The historic stream that leads from Front Beach to Mill Pond is the final watery stage in the thousand-mile spawning migration of American eels — or elvers. Well, not all of them. Just the ones that find their way to Rockport. The lucky ones.

The numbers, brought to you by Eric Hutchins and his volunteers from their annual census of eel movement along the Mill Brook, have been down for several years.

Not in 2021. This summer, the mighty Mill Brook has exploded into the eel-formational super highway.

The year began promisingly, with 350 eels counted from April 1 to the second week of June. But no sooner had the first wave abated than another began and the Mill Brook was en fuego.

Hutchins, a NOAA Fisheries biologist and Gulf of Maine restoration coordinator, said the streak included several hundred-eel days. As of June 29, the total count was 985 — including a jump of 402 eels in a single week.

Now the really important stuff: The Eel Raffle fundraiser, where ticket buyers tried to get closest to the pin on the final number of eels counted between April 1 and Columbus Day.

"Of the original 58 raffle tickets sold, only 14 are left viable with total count guesses over 1,000," Hutchins wrote in a June 29 email. "The next closet 'guess' is 1,033. But that might fall later today. Things are fast and furious this year at the eel trap."

Where they always respect their elvers.

On this date in 1999, Ken Griffey Jr. won the All-Star Game's star-studded Home Run Derby at Fenway Park for his second consecutive derby crown and the third of his career. But it's what Griffey did on this very same date in the 1994 derby at Camden Yards — in which he finished second — that has become legend. What was it?

Yankee fleet owner Tom Orrell had an eventful day last Wednesday when his Yankee Patriot II, on its way out of Gloucester for a 4 1/2-hour charter trip, initially reported a possible engine room fire to the Coast Guard.

It turns out what the crew thought was smoke from a fire was dense steam from a ruptured coolant hose. No one was hurt. The Coast Guard and Gloucester harbormasters responded.

The Coast Guard offloaded the 40 passengers and brought them into Harbor Loop. The Yankee Patriot II got its port engine working and came in under power and escort.

But the frenzy was on. Orrell's phone detonated with calls and texts from concerned friends, including Dave Marciano of "Wicked Tuna."

The Boston television stations, on the strength of the initial report over Channel 16, scrambled their air units. While at dock, Orrell said he counted four news helicopters scouring the harbor for a "a burning boat."

He said it was one of the strangest days he'd ever had.

Hey, look what's back. The Hook-a-Cure Fishing Tournament, a Gloucester-based event to raise funds to help individuals and families battling the affects of cancer, is back on the summer schedule after missing a year because of restrictions generated by the COVID-19 pandemic.

The two-day tournament, according to Pat Morris of organizer Scrawney-Morgan Foundation, is set for Aug. 1 and 2 (Sunday and Monday) and this year will feature two divisions — bluefin tuna and striped bass. The latter division also covers bluefish and groundfish.

Tuna boats may fish for all species. Those in the striper division cannot fish for tuna.

Fees for those fishing in the tuna division are $25 per foot-length of the vessel or $250 per angler. The straight fee for the striped bass division is $99 per angler. Those fees also cover the post-tourney festivities set for after the final weigh-in on Monday night.

Those requiring more information should check out hookacure.org and scrawney-morgan.org for all the other details.

The Scrawney-Morgan Foundation, named in honor of Gloucester resident — and avid fisherman — William "Scrawney" Morris, is partnering with the Joe Andruzzi Foundation and the Dana-Farber Cancer Institute on the event.

Even more wisdom may be gleaned from calling Alexis Morris at 978-290-8329 to get the skinny on boats, anglers and registration. Pat Morris at 978-815-2170 handles everything else.

On July 12, 1994, Griffey became the only player ever to hit the B&O warehouse, the brick edifice on the other side of Eutaw Street from the ballpark. The moonshot traveled an estimated 460 feet. Griffey also is the only player to win the derby three times.

gloucester - A Celebration of ...