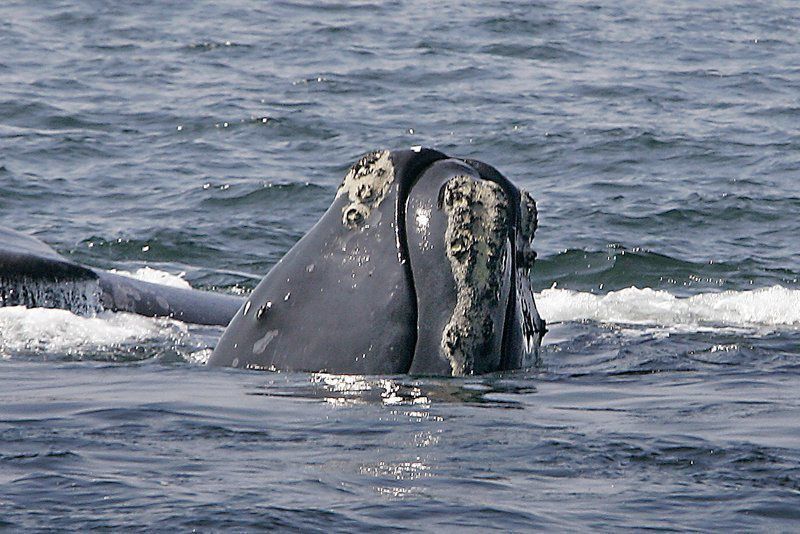 Stephan Savoia/AP file photo/A North Atlantic right whale breaks the ocean surface off Provincetown in Cape Cod Bay. The Navy has announced it will expand areas in which it limits its use of sonar and explosives off the East Coast as a means of helping protect imperiled right whales. 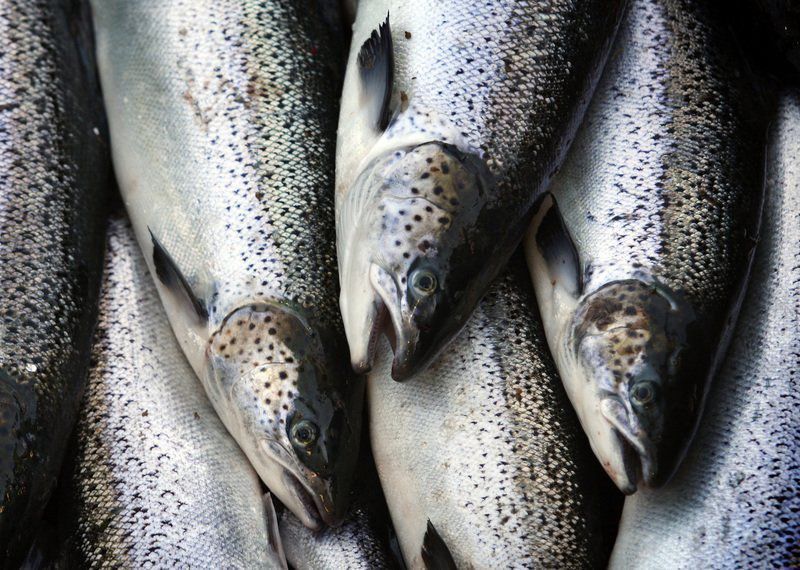 Robert F. Bukaty/AP file photo/Farm-raised Atlantic salmon move across a conveyor belt as they are brought aboard a harvesting boat near Eastport, Maine. The National Oceanic and Atmospheric Administration has named 2019 the International Year of the Salmon.

Stephan Savoia/AP file photo/A North Atlantic right whale breaks the ocean surface off Provincetown in Cape Cod Bay. The Navy has announced it will expand areas in which it limits its use of sonar and explosives off the East Coast as a means of helping protect imperiled right whales.

Robert F. Bukaty/AP file photo/Farm-raised Atlantic salmon move across a conveyor belt as they are brought aboard a harvesting boat near Eastport, Maine. The National Oceanic and Atmospheric Administration has named 2019 the International Year of the Salmon.

So, tomorrow's Election Day and here's hoping our democratic process has provided you with some suitable candidates worthy of your vote. If not, you can always write in the FishOn staff, based solely on our simple dual campaign promises:

We think it's what our Founding Fathers and Mothers had in mind all along – self-imposed term limits.

We also have our own method for choosing candidates: They should be strong advocates of the commercial fishing industry, fans of baseball and they should have sent us presents on our birthday and Christmas.

Shuffling through the pile last weekend, and gotta say: It's not looking great for this crop of cheapskates.

But that's us. Y'all should head out and vote. If nothing else, it's an hour away from work. Unless you live in Chicago, where you can turn it into a full-time occupation.

The new Navy slogan should be "Shhhhhhh"

The U.S. Navy last December adopted the 10th slogan in the storied history of the military service (and its a collected advertising agencies). The slogan is "America's Navy, Forged by the Sea." Thank God the French Navy already had taken "We Surrender, Take Our Ship" out of the running.

Our Navy made some news last week when it announced it will expand areas in which it limits its use of sonar and explosives off the East Coast as a means of helping protect the imperiled right whales. It's doing the same in the Gulf of Mexico to help protect the Bryde's whale.

(Quick question: If you clean up after a Bryde's whale, does that make you a Bryde's maid?)

"While the biggest modern-day threats to the whales are entanglement in fishing gear and direct strikes from vessels, underwater noise pollution can interfere with their communication and affect their behavior, the fisheries service said," according to a story in the Virginia Pilot.

The Navy also said it will begin broadcasting messages to ships with exact locations of observed right whales so they can be avoided as a means for reducing ship strikes.

Just for that, we're rooting for Navy this year against Army in December's annual Army-Navy Game. They can use it. The Midshipmen have dropped the past two to the Black Knights of the Hudson.

NOAA's Stellwagen Bank National Marine Sanctuary is seeking six primary and three alternative members for its advisory council designed to ensure public participation in the management of the sanctuary.

It's looking for six primary members and three alternates to come off the bench when the primary council members are otherwise engaged or the advisory council is facing a tough lefthander. Analytics are everywhere.

The application period opened last Thursday and completed applications are due Nov. 30. To receive an application or for further information, contact Elizabeth Stokes at the National Oceanic and Atmospheric Administration at Elizabeth.Stokes@noaa.gov or 781-546-6004.

International year of the salmon? What'd they do for that?

Despite not having won the World Series, the Super Bowl, the World Cup, the Stanley Cup, the Nobel Prize, the Pulitzer Prize or the Fish Box Derby, 2019 already has been crowned the International Year of the Salmon by NOAA and other salmon sycophants.

The organizers kicked off the proceedings last Wednesday with a lecture at the New England Aquarium on the history and culture of the Atlantic salmon in New England.

"With the focal year in 2019, the International Year of the Salmon is an ambitious five-year initiative that will focus on outreach and research across the northern hemisphere beginning in 2018 and continuing until 2022," said NOAA Fisheries in a release.

All well and good. Who doesn't like salmon? Still, we all know that 2019 should be the International Year of the Mookie.

Last week, you may seen at story in the Gloucester Daily Times and on gloucestertimes.com about the New England Fishery Management Council's plans to conduct its first full-scale review of the Northeast groundfish catch share program that was greatly expanded in 2010.

We mentioned the council is searching for an independent contractor to help with the review. We should have mentioned the role is a short-term, temporary position that will begin around Dec. 15 and culminate when the review and its subsequent report are finished, estimated to be some time next year.

"Interested professionals are encouraged to submit a letter of interest, current resume or curriculum vitae, examples of similar work completed for other organizations or publications, and a budget with expected expenses," the council said in its posting.

The deadline for those submissions is Nov. 30.

There. We feel better.

We end this week with a shoutout to Borehead, the man behind the popular FisheryNation.com website. The site is a daily trove of interesting fishing stories from North America – including many from the Gloucester Daily Times – and elsewhere. Borehead, and we really have no clue of his real name, is working through an illness and the site is on hold until he's feeling better. And we hope that's soon.