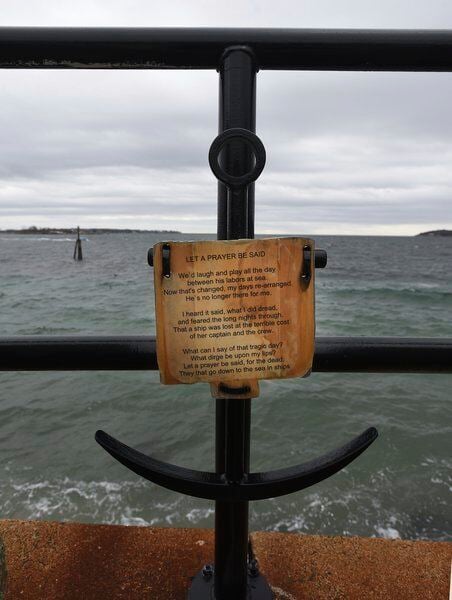 PAUL BILODEAU/Staff photo. A prayer hangs on one of the ornate anchors near the Gloucester Fisherman's Memorial on Stacy Boulevard on Wednesday. Michael Porper, one of four fishermen missing since the Emmy Rose sank off Cape Cod on Monday, has family in Gloucester. The Coast Guard suspended its search for the crew Tuesday evening. 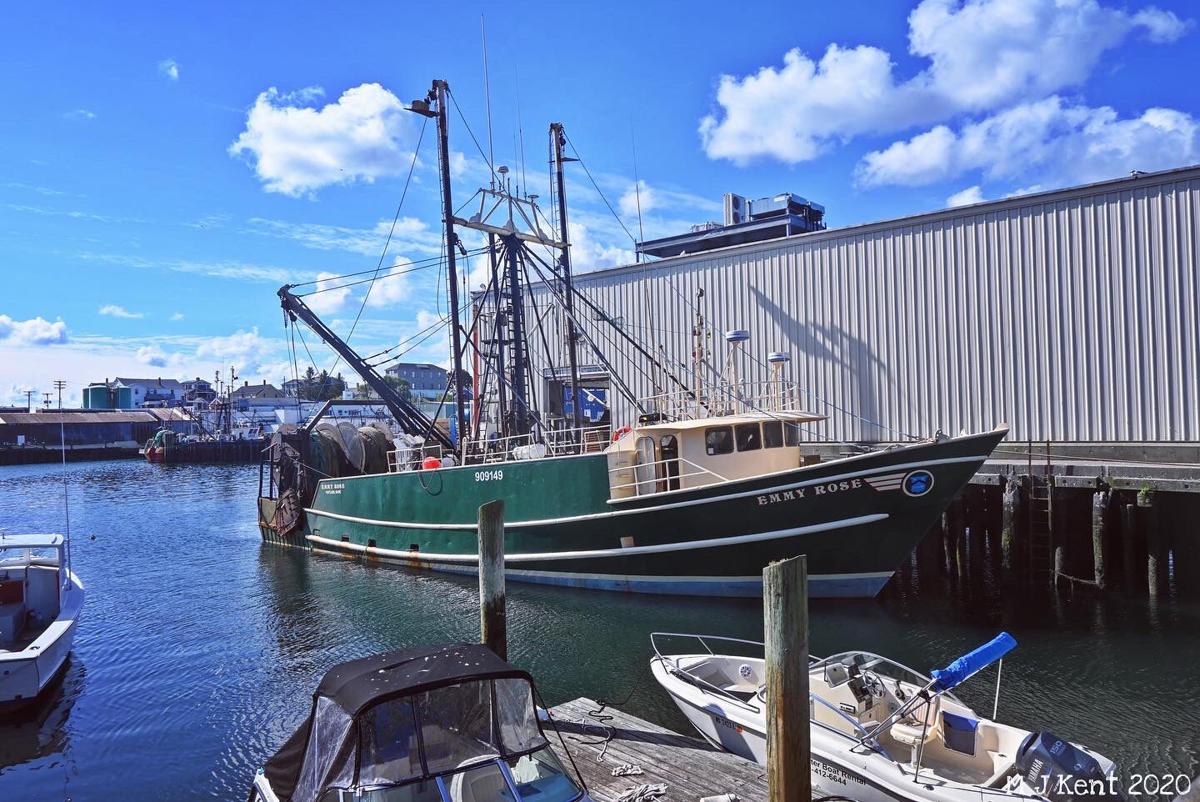 The dragger Emmy Rose, seen in Gloucester Harbor earlier this year, sank Monday morning, with four crewmen aboard. One of fishermen was Michael Porper of Gloucester.

PAUL BILODEAU/Staff photo. A prayer hangs on one of the ornate anchors near the Gloucester Fisherman's Memorial on Stacy Boulevard on Wednesday. Michael Porper, one of four fishermen missing since the Emmy Rose sank off Cape Cod on Monday, has family in Gloucester. The Coast Guard suspended its search for the crew Tuesday evening.

The dragger Emmy Rose, seen in Gloucester Harbor earlier this year, sank Monday morning, with four crewmen aboard. One of fishermen was Michael Porper of Gloucester.

One of the four fishermen missing since the commercial fishing boat Emmy Rose sank off Provincetown early Monday had Gloucester ties.

The crew members were Michael Porper, of Gloucester and Peaks Island, Maine; and skipper Robert Blethen Jr., Jeff Matthews and Ethan Ward, all of Maine. They were identified by the Sustainable Harvest Sector, a group of 100 fishing vessel owners and operators, and by the Coast Guard. The sector said in a statement that it would release information about memorial services for the fishermen when they are available.

"Four brave men of the sea were lost," the statement said.

The Emmy Rose's fishermen had harvested groundfish such as haddock and were scheduled to land the catch at Fisherman's Wharf in Gloucester on Tuesday around 8 a.m.

"They hailed my brother about 9 that night (Monday) that they were steaming in with about 50,000 pounds," said Vito Giacalone, who runs Fisherman's Wharf Gloucester, a wholesale seafood dealer off Rogers Street, with his brother Nick. "We're just totally distraught. We saw these guys weekly."

Giacalone said the Emmy Rose went out for three to seven days fishing before bringing in its the catch. He described the crew as experienced, "great guys, respectable, young guys with wives and children working for their families."

Giacalone and Angela Sanfilippo of the Gloucester Fishermen Wives Association both said Porper had family on Cape Ann.

Sanfilippo said she had spoken to the wife of the owner of the Emmy Rose, and that association was getting in touch with the fishermen's families to offer aid. "That's what we do," she said.

She said she spoke to Porper's sister and grandmother, who lives in Rockport. "They said they are frozen in time, and didn't want to talk."

A GoFundMe page (https://bit.ly/365NA35) has been set up for Porper's daughter and girlfriend who live on Peaks Island.

The Coast Guard was alerted to the Emmy Rose's distress when the vessel's emergency beacon hit the water and sent out its signal about 1:30 a.m. Monday, the Coast Guard said. The crew did not make any sort of mayday or distress call.

The first Coast Guard crews on the scene discovered debris and an empty life raft. The emergency beacon was discovered later.

"It always seems to happen at night, with no signs, making it tough. It brings back other losses" Sanfilippo said, referencing the Patriot, which sank Jan. 3, 2009, with its loss of two Gloucester fishermen, and the Lady Luck on Jan. 31, 2007, and its crew of two, among them.

The Coast Guard covered more than 2,066 square miles of ocean over 38 hours before halting the search for the fishermen of the Emmy Rose on Tuesday evening.

The cause of the sinking remains undetermined but is under investigation by the Coast Guard.

The boat was owned by Rink Varian, who was not on board and has described the sinking as a terrible accident. His wife set up a GoFundMe page (gf.me/u/y966na) for the families of the crew, and wrote on the page that the Maine Coast Fishermen's Association is accepting cash or check donations with "F/V EmmyRose" in the memo line at 14 Maine St. Box 40, Brunswick, ME 04011.

Giacalone said the steel-hulled dragger was in great condition and well-maintained by Rink Varian.

"In my head, I've ruled out anything wrong with the boat," he said. "It's a great mystery, but I'm sure the investigation will reveal more."

Like Giacalone, Sanfilippo wonders what happened: "Whatever it was, it happened quick."