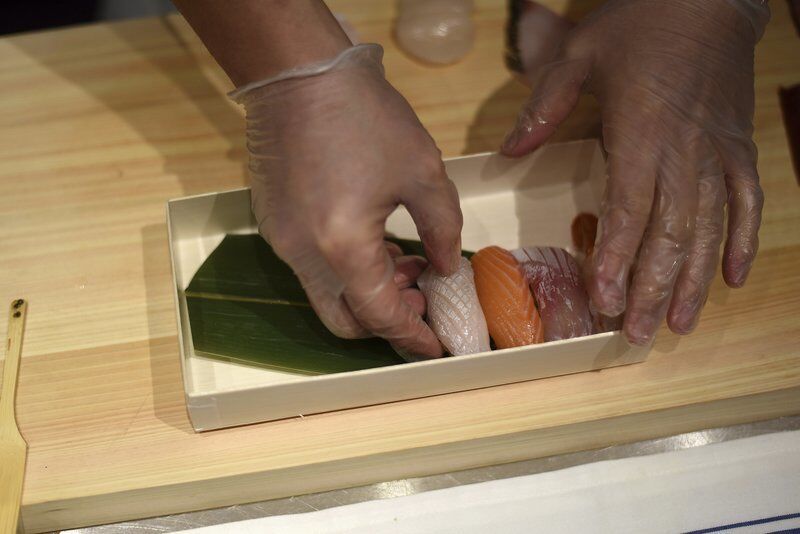 PAUL BILODEAU/Staff photo. Sushi chef Sang Lee places sushi and sashimi in a take-out box at his kitchen located in Savour Wine and Cheese in Gloucester. 2/10/21 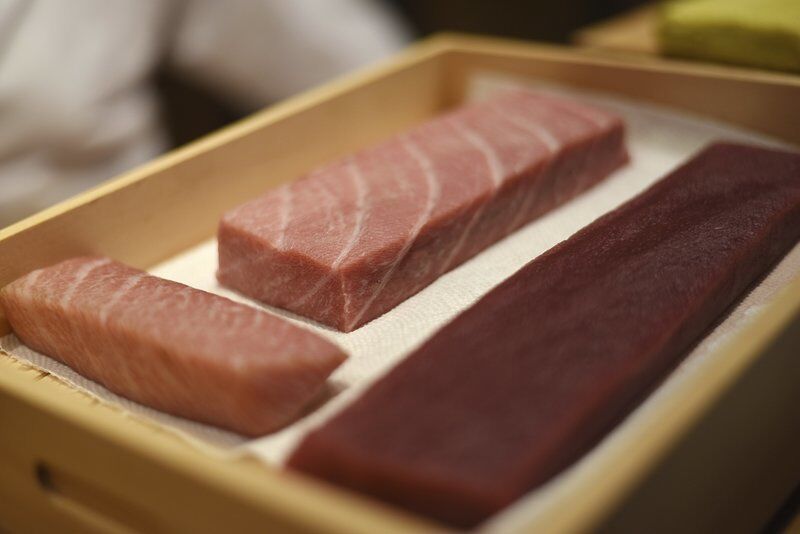 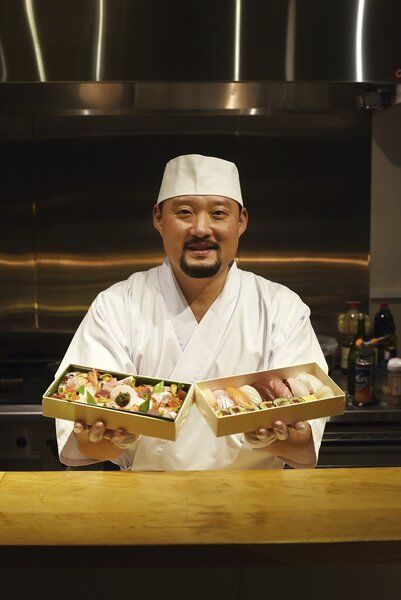 PAUL BILODEAU/Staff photo. Chef Sang Lee displays his hand-made sushi, which he says, represents his life work, in two take-home boxes at his kitchen located in Savour Wine and Cheese in Gloucester. 2/10/21

PAUL BILODEAU/Staff photo. Sushi chef Sang Lee places sushi and sashimi in a take-out box at his kitchen located in Savour Wine and Cheese in Gloucester. 2/10/21

PAUL BILODEAU/Staff photo. Chef Sang Lee displays his hand-made sushi, which he says, represents his life work, in two take-home boxes at his kitchen located in Savour Wine and Cheese in Gloucester. 2/10/21

When it comes to making sushi, the secret is in the hands of the creator.

“You can steal all my recipes, but you can’t steal my hands,” Sang Hyun Lee said while shaping a nigiri of vinegared rice and raw fish. “It took me almost 20 years to make top quality sushi and I’m still trying to get better every day.”

Having spent two decades as a sushi chef at restaurants all along the East Coast, Lee has finally swapped the congested streets of New York for the ocean breezes of Cape Ann. He has opened his own private sushi Omakase service in the kitchen of Gloucester’s Savour Wine and Cheese at 76 Prospect St. "Omekase" is Japanese for "I'll leave it up to you," and is what patrons tell a sushi chef, rather than ordering a la carte.

His service, Sushi Sang Lee, runs from 5 to 8 p.m. Thursday to Sunday with a limit of 24 Omakase orders per night.

Lee also serves maki rolls and more, which can be found on his full menu.

“I never say I’m working as it is another fun day playing with sea creatures,” Lee explained. “My sushi looks simple, but there is lots of care and love when I prepare them.”

“This box of sushi is my life,” he said, pointing at carefully crafted nigiri that sits in a bamboo box.

Lee’s passion for sushi began at a young age when, as an 8-year-old growing up in South Korea, his father took him to try sushi.

You could say that Lee was hooked.

In 2001, Lee moved to Boston with plans of learning English and experiencing American culture. Quickly falling in love with the location, Lee decided to stay and spent his years at various restaurants across the East Coast mastering the skill of creating quality sushi.

While living in New York City, Lee would end up working at the Japanese restaurant Shuko with chef Nick Kim. “It was a very exciting place to work,” he said of Shuko, explaining that regulars included celebrities such as music starts Jay-Z and Beyonce, and soccer star David Beckham.

In 2012, Lee found himself in Gloucester for what he thought was going to be just a summer working at a local sushi bar.

“That summer I met my wife Elena,” he said, laughing.

Married shortly after, the two would live in a number of states while Lee worked at restaurants such as New York-based Mifune, Sen Sakana, Akari, 1or8, New Jersey’s Sushi Kai, and Boston’s Uni, Oliveria’s, O Sushi, Ruyi, and Oishii Too.

When the novel coronavirus pandemic hit in the spring of 2020, the Lees moved back to Cape Ann to be closer to family.

It is here, in America's oldest seaport, that Lee found a community focused on collaboration for the sake of quality.

Lee works with local fishermen and seafood wholesalers to get the best produce from the sea.

"There is no one who does the fish more justice than Sang," said fisherman Kyle Grant of the FV Battle Wagon. "I am so pumped up for what we got going on because it is a way for Gloucester to connect with Gloucester."

"We both have a big respect of the fish," Lee added. "He respects when he catches it and I respect it when I prepare it."

Throughout the pandemic, Lee worked private events while temporarily working out of the kitchen of Tonno's Restaurant. He has since moved to have his own space in the back of Kathleen Erickson's Savour Wine & Cheese. You can find his menu at https://www.sushisanglee.com/

Staff Writer Taylor Ann Bradford can be reached at 978-675-2705 or tbradford@gloucestertimes.com.

Disclaimer: Lee gave samples of his sushi to the reporter and photographer during the interview.

The original version of this story, published in print and online, stated that the Japanese restaurant Shuko had three Michelin stars, which it does not. At Shuko, Lee worked with chef Nick Kim. Kim had formerly been chef at Masa, which earned three Michelin stars while he was there.