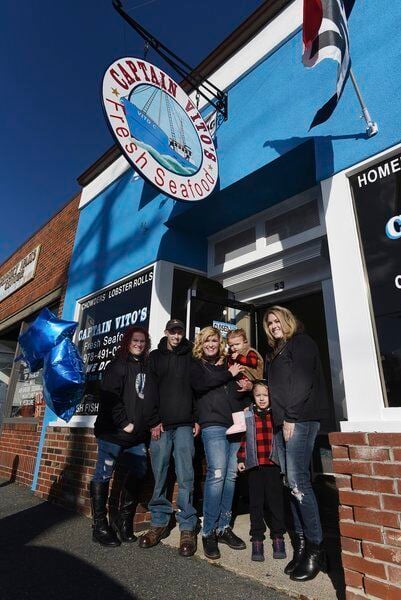 PAUL BILODEAU/Staff photo. Washington Street in Gloucester has a new fish market, Captain Vito's at 53 Washington St. Pictured are the Gloucester family who runs it, from left, Ninfa, Vito and Enza Ciaramitaro with Vanessa, 2, Phillip, 5, and mom Josie MacDougall. 11/18/20 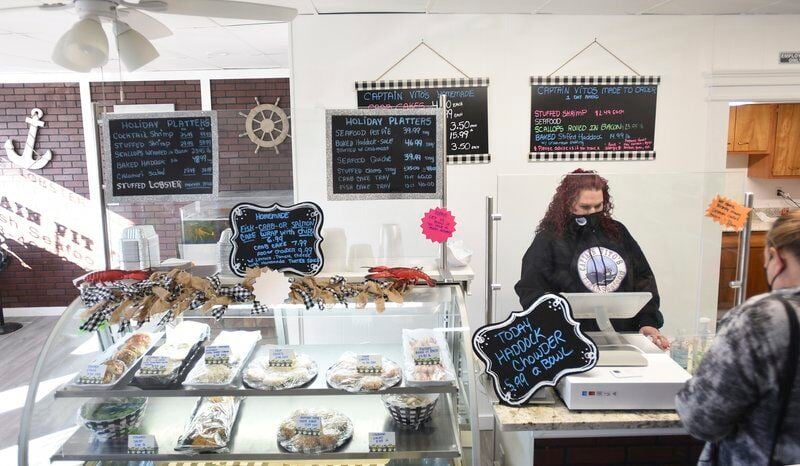 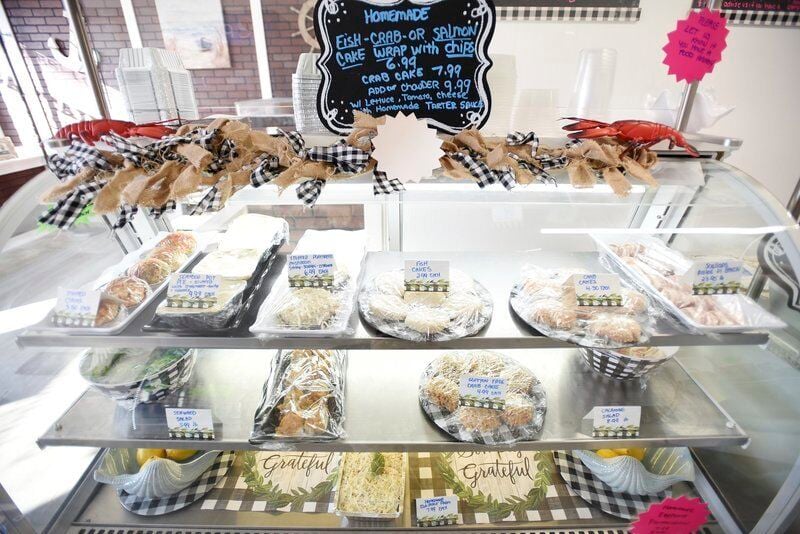 PAUL BILODEAU/Staff photo. Washington Street in Gloucester has a new fish market, Captain Vito's at 53 Washington St. Here is a display case with just some of its offerings. 11/18/20

PAUL BILODEAU/Staff photo. Washington Street in Gloucester has a new fish market, Captain Vito's at 53 Washington St. Pictured are the Gloucester family who runs it, from left, Ninfa, Vito and Enza Ciaramitaro with Vanessa, 2, Phillip, 5, and mom Josie MacDougall. 11/18/20

PAUL BILODEAU/Staff photo. Washington Street in Gloucester has a new fish market, Captain Vito's at 53 Washington St. Here is a display case with just some of its offerings. 11/18/20

Twice before, Gloucester has boasted fish markets bearing the name of Capt. Vito Ciaramitaro. Now there is a third and it remains a family affair.

Captain Vito's Fresh Seafood and Delivery is up and running at 53 Washington St., joining Steve Connolly Seafood and Turner's Seafood Market as the city's hat trick of traditional full-service fishmongers.

"A town like Gloucester should have a lot of fish markets," said Vito Ciaramitaro, the third of the Ciaramitaros to bear the name and one of the family members leading its return to the onshore fish business. "It's what we're known for."

The venture is a collaboration of Vito, his sister Ninfa Ciaramitaro and their mother Enza Ciaramitaro, based on an idea from the second Capt. Vito, the father of the siblings and husband of Enza.

"My dad kind of come up with the idea because he still had a lot of friends fishing," said Ninfa Ciaramitaro.

"He really wanted to do something for the kids," Enza Ciaramitaro said.

The Ciaramitaros have been a decades-long presence in Gloucester fishing, dating back to the original Capt. Vito. The patriarch owned and skippered the the Vito C and Vito C II boats out of Gloucester. Enza's father, Giacomo Ralloo, fished with him.

Capt. Vito also led the family into the retail fish business, first at a shop on Washington Street and later on Main Street, where it operated, along with a fried fish counter, for nearly a decade at the current site of Cruiseport Gloucester, 6 Rowe Square.

Along the way, he passed the reins along to his son. His name? What else? Vito.

"It's a tradition," Ninfa said with a what-can-I-tell-you shrug. "We're Italian."

The newest Captain Vito's, with the bright blue frontage next to Sclafani's Bakery, offers an array of fresh fish, shellfish and homemade prepared items.

It also has heat-to-serve specials, such as crabmeat-stuffed haddock, crabmeat-stuffed gray sole and seafood pot pie. Chowders and salads — including a seaweed salad for the bold — also are available.

Ninfa Ciaramitaro, who left her position as a receptionist at BankGloucester (where Enza still works), said all offerings — such as the Nonna Ninfa's fishcakes, named for her grandmother — come from family recipes and are made from scratch.

The shop already is gearing up for Christmas, when it plans to offer holiday seafood platters - including shrimp cocktail, baked-stuffed shrimp and baked-stuffed lobsters — and homemade Italian fig cookies.

The seafood market, open daily from 10 a.m. to 6 p.m. (4 p.m. on Sunday), delivers throughout Cape Ann and (within reason) the North Shore.

Opening a new small business is daunting enough. Opening a new business in the midst of an unrelenting pandemic presents even more challenges — particularly in the retail food industry.

"We first talked about it in June," Ninfa said. "We just decided to give it our all and create a place where people can feel comfortable and able to come and get all their fresh seafood."

The demand, she said, has been solid.

"It's been really steady, and that's just from word of mouth," she said. "We're just trying to extend the legacy of Capt. Vito C through our food."

More information may be found at https://www.captainvitosfreshseafood.com/