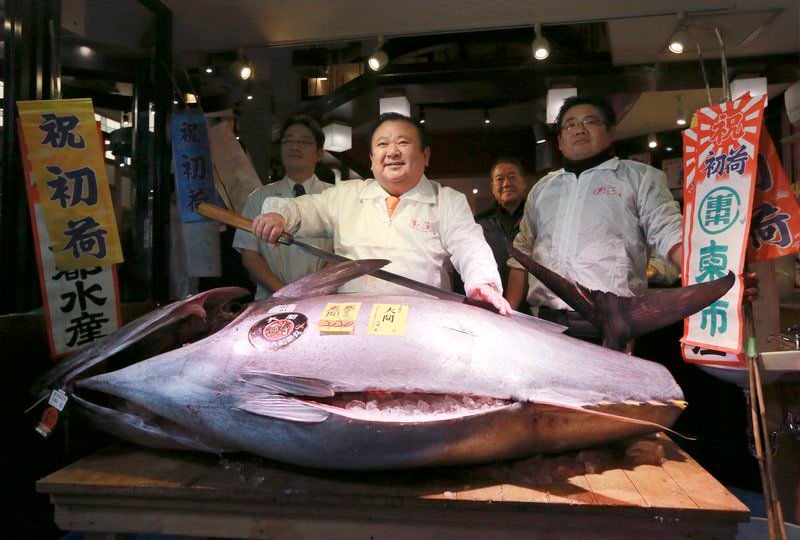 EUGENE HOSHIKO/AP file photo/Kiyoshi Kimura, center, president of Kiyomura Co., poses with a bluefin tuna at his Sushi Zanmai restaurant. He made a winning bid of $632,000 at the last fish auction at Toyko's Tsukiji fish market on New Year's Day in 2017. The Japanese sushi chain boss bid a winning $1.8 million for a 608-pound bluefin tuna at the first auction of tuna fish at Toyko's new fish market, Toyosu, this New Year's Day. 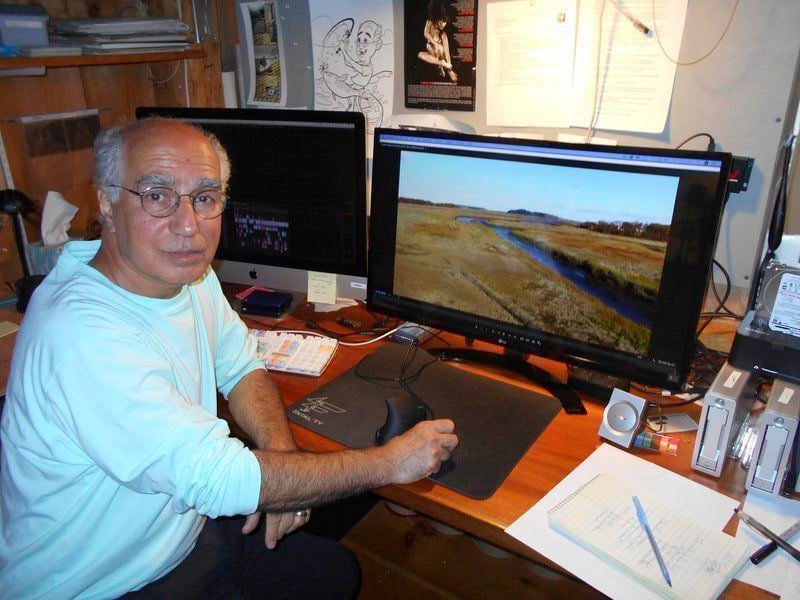 SEAN HORGAN/Staff file photo/Nubar Alexanian of Gloucester, a nationally honored filmmaker and photographer, chronicles the extent of the green crabs' largely unabated invasion of the Great Marsh in his short documentary "Recipe for Disaster." It will be shown at The Documentary Short Film Festival 2020 in Toronto next month.

EUGENE HOSHIKO/AP file photo/Kiyoshi Kimura, center, president of Kiyomura Co., poses with a bluefin tuna at his Sushi Zanmai restaurant. He made a winning bid of $632,000 at the last fish auction at Toyko's Tsukiji fish market on New Year's Day in 2017. The Japanese sushi chain boss bid a winning $1.8 million for a 608-pound bluefin tuna at the first auction of tuna fish at Toyko's new fish market, Toyosu, this New Year's Day.

SEAN HORGAN/Staff file photo/Nubar Alexanian of Gloucester, a nationally honored filmmaker and photographer, chronicles the extent of the green crabs' largely unabated invasion of the Great Marsh in his short documentary "Recipe for Disaster." It will be shown at The Documentary Short Film Festival 2020 in Toronto next month.

We here at FishOn were recently informed by dead-letter drop from a highly unreliable sleeper agent (George Sibley, barrister) that an unnamed Gloucester person (George Sibley, person) once appeared in a Gloucester episode of the early '60s television drama, "Route 66." And with that, the far flung FishOn staff leaped into action.

Remember the show? Two Korean War vets driving around America in a Corvette, working here and there at this and that, into and out of mischief, sort of Kerouac with commercials and without the benzedrine. That's all right if you don't. It just means that, unlike us, you're not older than St. John the Baptist.

We froggies went a searchin'. Behold, we found it on YouTube, along with a nifty Patriots highlight film from the 8-4-2 1966 season, "Champions Without a Crown," which when you think about it, sounds awfully familiar.

The "Route 66" episode, "Once to Every Man," which aired Oct. 27, 1961, was terrific. Shot in black-and-white, it offers a beautiful (if somewhat bleached out) visage of Gloucester — especially Rocky Neck, the Gloucester Marine Railways and the ride to Eastern Point. There's a lovely, sweeping shot of Niles Beach and scenes of sailboats in Smith Cove and the Outer Harbor.

It's really a hoot. You should check it out. Only one problem: We watched the entire hour-long episode. No George. He swears he was in a scene, sitting on his bicycle in the background near spacious Rule, Britannia, the longtime Sibley compound on Rocky Neck. But he also claims to have found the Lindbergh baby, so what are you going to do?

Got a note last week from our pal Nubar Alexanian, the Gloucester auteur behind the highly acclaimed short documentary, "Recipe for Disaster: Green Crabs in the Great Marsh" that already has shown as an official selection at the Newburyport Film Festival, the Massachusetts Independent Film Festival, the Woods Hole Film Festival and the Salem Film Fest.

The well-received film now is going international. It has been chosen as an official selection at The Documentary Short Film Festival 2020 in Toronto, which last time we looked is in Canada. It is set to be screened Feb. 6.

"This is a terrific festival which should help us break into the international film network," Alexanian wrote in an email.

Invitations have gone out to the Duke and Duchess of Sussex.

Bourbon and water. A fishy tale

We here at FishOn are not ones for the bourbon. It's a long story involving a New Year's Eve and someone waking up hairless as an Olympic swimmer. The judge's gag order remains in place. Less said, the better.

In Kentucky last week, the Jim Beam distillery was fined $600,000 by the state environmental protection agency for the July spill that sent bourbon from 40,000 aging barrels flowing into a nearby creek and ultimately into the Kentucky and Ohio rivers, killing an estimated 228,000 fish.

The spill occurred after lightning struck a barrel warehouse and ignited a withering blaze — so hot, according to the Associated Press, that it melted headlights on firetrucks — that collapsed the building and destroyed the barrels, sending the runoff into the waterways.

According to a story on the BBC website, a sheen of ignited alcohol on the surface of the water sucked all available oxygen from the water. That, combined with the heavy infusion of alcohol into the water and the fire itself, killed the fish.

And this wasn't the first time. The same thing happened in 2003 to a Jim Beam warehouse in Bardstown, Kentucky, when a lightning strike resulted in 800,000 gallons gushing into nearby streams, and last year, when another fire caused another spill of about 90,000 barrels of bourbon.

Jim Beam. No friend of the fish.

Well, they were around for 150 million years, which means the species dawned during Tom Brady's junior year at Michigan. That's a pretty good run. But apparently the Chinese paddlefish was no match for man. We've finally succeeded in driving the species — the world's largest freshwater fish — into extinction. Well done, us.

According to a story in the New York Post, new research in a study published in the Science of the Total Environment journal states the Chinese paddlefish — which measured up to 23 feet in length and weighed as much as 1,100 pounds — has been wiped out by overfishing and dam construction in China.

"It's very sad," Zeb Hogan, a fish biologist at the University of Nevada-Reno, told National Geographic. "It's the definitive loss of a very unique and extraordinary animal, with no hope of recovery."

The Post story said the species, which is in the sturgeon family, stopped reproducing around 1993 (insert your own in-law joke here) and probably became extinct sometime between 2005 and 2010.

"The last (Chinese) paddlefish was seen in 2003 when researchers attached a tag to one that was accidentally captured near Yibin in south-central China," the story stated.

Its only remaining close relatives apparently are the much smaller American paddlefish that live in parts of the Mississippi River system in approximately 20 states.

Kiyoshi Kimura is known as the "Tuna King" in Japan, which must come as something of a surprise to the Imperial House of Japan. Not to mention the tuna.

Anyway, Kimura showed up at the first fish auction of the New Year at Tokyo's Toykosu Fish Market and plunked down $1.8 million — 193 million yen if you're scoring at home — for a 608-pound bluefin tuna that had been caught off the north coast of Japan.

That was nothing. Last year, according to a story on SeafoodNews.com, Kimura paid a record-setting $3.1 million for a 612-pound bluefin tuna.

"This is the best," Kimura, the head of a sushi restaurant chain, told the assembled tuna scribes this year. "Yes, this is expensive, isn't it? I want our customers to eat very tasty ones this year, too."

He should have gone to see P.J. down at Compass Seafood down on Harbor Cove. He probably could have gotten out of there for no more than $1.7 million.

It pays to shop around. Your majesty.