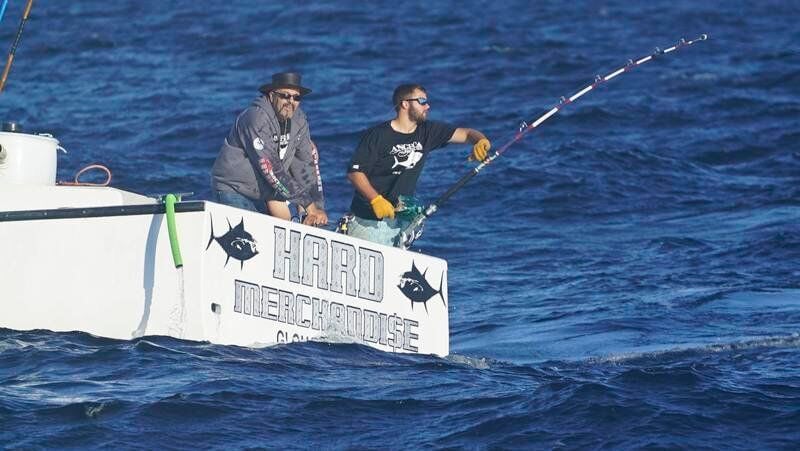 PFTV/Courtesy photoCapt. Dave Marciano, left, of Beverly is back on his newly renovated Hard Merchandise for the tenth anniversary season of "Wicked Tuna," which has a 90-minute season premiere on Sunday, Feb. 21 at 9 p.m. Fishing with him this season are daughter Angelica Marciano and nephews Joseph Marciano, pictured, and Jason Muenzer. 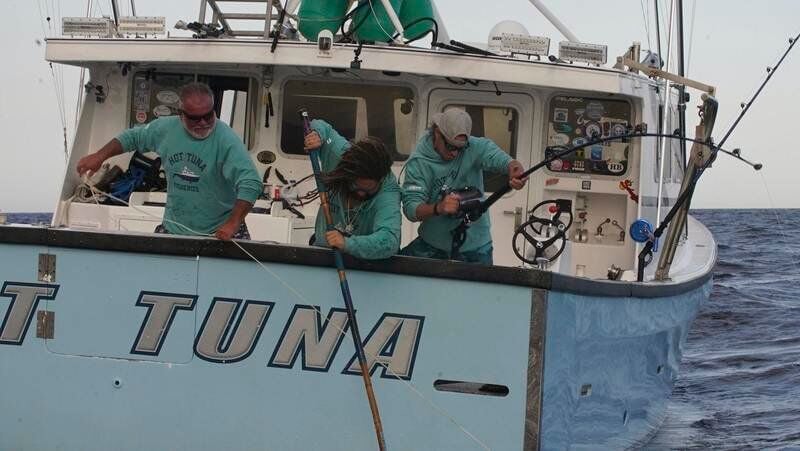 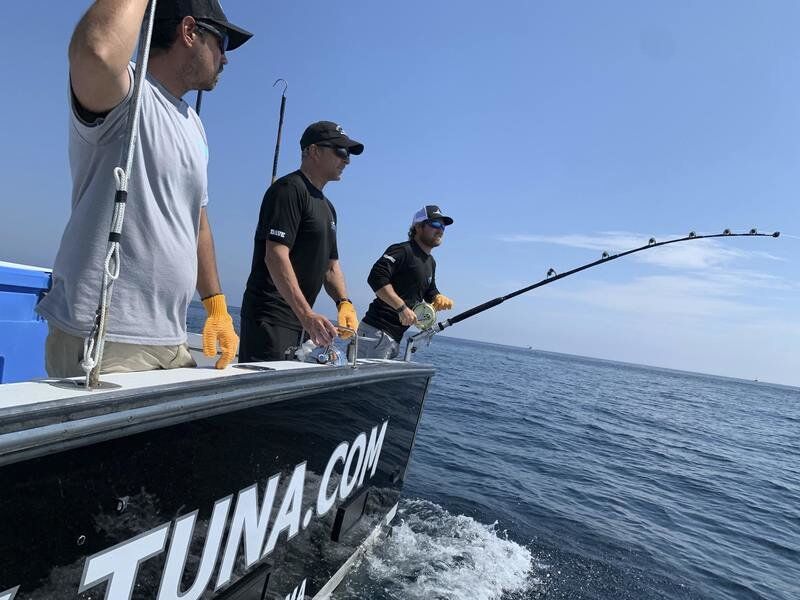 PFTV/Courtesy photoFishing for bluefin tuna aboard the Gloucester-based FV-Tuna.com are, from left, Sandro Maniaci, Dave Carraro and Geordie Sousa, who are back to compete and celebrate the 10th anniversary of the hit National Geographic Channel series "Wicked Tuna" based in Gloucester.  The 90-minute premiere airs on Sunday, Feb. 21  at 9 p.m.

PFTV/Courtesy photoCapt. Dave Marciano, left, of Beverly is back on his newly renovated Hard Merchandise for the tenth anniversary season of "Wicked Tuna," which has a 90-minute season premiere on Sunday, Feb. 21 at 9 p.m. Fishing with him this season are daughter Angelica Marciano and nephews Joseph Marciano, pictured, and Jason Muenzer.

PFTV/Courtesy photoFishing for bluefin tuna aboard the Gloucester-based FV-Tuna.com are, from left, Sandro Maniaci, Dave Carraro and Geordie Sousa, who are back to compete and celebrate the 10th anniversary of the hit National Geographic Channel series "Wicked Tuna" based in Gloucester.  The 90-minute premiere airs on Sunday, Feb. 21  at 9 p.m.

The coronavirus pandemic's tidal wave of challenges made its way to the high seas, and viewers of National Geographic Channel's "Wicked Tuna" will see a new dynamic when the 10th season opens with a 90-minute premiere on Sunday, Feb. 21, at 9 p.m.

The show is known for following Gloucester fishermen in the highly competitive hunt for giant bluefin tuna and the race back to shore in search of the highest price for the fish that is in demand around the world.

That is until COVID-19 prompted a business shutdown nearly a year ago, with restaurants shuttered or operating at a fraction of their capacity. The market and demand for the usually lucrative bluefin sank.

But the fish buyers and the eight captains on "Wicked Tuna" worked together to create a plan that would not flood the market and would keep them all afloat.

"It was great to see fishermen working together with buyers to do the best we could in these difficult times. We didn't see the prices we saw in the past but it was a fun year to participate in because we wanted it to be fun," said Capt. Dave Marciano, who is back on a newly renovated Hard Merchandise this season.

"We didn't make the money like past years but we were fortunate in this climate to be doing anything at all. A lot of people are unable to do whatever it is they do and many restaurants never opened fully. The one thing we wanted was for it to be a very positive season for the viewers. Collectively we all have seen enough negativity between elections and the pandemic. We truly want people to have fun watching this show and forget about their worries, and I think we accomplished that," said Marciano, a Beverly resident who fishes out of Gloucester.

Capt. Paul Hebert of the Wicked Pissah suffered a personal loss when his father, Donald Hebert, who was in a nursing home, died of COVID-19 early in the pandemic.  At the time, the captain was filming the spinoff series "Wicked Tuna: Outer Banks" and, because of restrictions, was unable to visit his dad.

"It was one of the worst things I've been through. It was such a surprise to all of us," Hebert said.

He hopes this 10th season will be a spirit lifter and a bright spot for viewers.

"We worked as hard as we possibly could, and we put a lot of time in my boat because my boat is slower but it paid off," he said. "We are excited for this season and everyone is going to see how we all came together in this pandemic and we all helped each other out. I think the world has had enough with all the fighting, and it goes to show you when times are really tough, people who are competitive can work together."

He gave a shout out to his crew — Rick Schrafft of Rockport and Doug Hittinger of Newburyport — for their steadfast labor.

The eight captains set aside their maritime rivalries to find some camaraderie.

"The pandemic had huge consequences," said Marciano. "What was interesting this year is we limited ourselves due to the loss of the markets, and it was a great sign that the buyers and fishermen were working together in a gentlemen's agreement to sell three days a week and not flood the market, and we didn't need the government to take care of the problem. But there is always a competitive edge because everybody wants to get just one more than the other guy."

Marciano said this is going to be the most fun season yet, and that fun will go worldwide because "Wicked Tuna" airs internationally in 171 countries and in 43 languages.

"We have a fantastic dynamic in the way it all came out that will interest even non-fishing viewers too. I think they in particular will enjoy this show," he said. "We wanted to create something that people would have fun watching and be a part of.  With the nearly year anniversary of when this pandemic began, we all are trying to survive in this life."

Reigning champion Capt. T.J. Ott of the Hot Tuna returns along with Gloucester's Capt. Dave Carraro, who has the most wins of all, aboard the FV-Tuna.com.  Also competing are Beverly resident Capt. Bob Cook of the Fat Tuna, and new captains Jack Patrican of the Time Flies and Spurge Krasowski of the Moonshine.

Also returning is Capt. Tyler McLaughlin of the Pinwheel who too feels the pressure.

"It’s just really hard to make a living right now," he said. "This year in Gloucester we’re just hoping to survive and make a couple bucks. These are strange times."

One episode this season will showcase the local fleet's community outreach. New England veterans from the Wounded Warrior Project were invited to join the tuna fishermen — and the proceeds from their catches are donated back to the nonprofit project.

"We know these are difficult times," said Carraro, a five-time champion.

He noticed during the pandemic that the docks were unusually quiet at Cape Ann's Marina.

"The fans, especially the kids, love the show," said Carraro. "When we come in from fishing there is often a crowd, but this year it was much different. There were times when we saw no one, and if there were tourists around, they were afraid to approach us because they didn't want to invade our space."

But with the 10th anniversary season, viewers will get an up close look at how the high-seas tuna-fishing rivalry will unfold from the comfort and safety of their homes.

What: The new season of National Geographic’s hit series "Wicked Tuna" kicks off with an extended 90-minute episode.

Where: Season 10 premieres Sunday, Feb. 21, at 9 p.m. on National Geographic Channel; seasons one through nine now Streaming on Disney+.