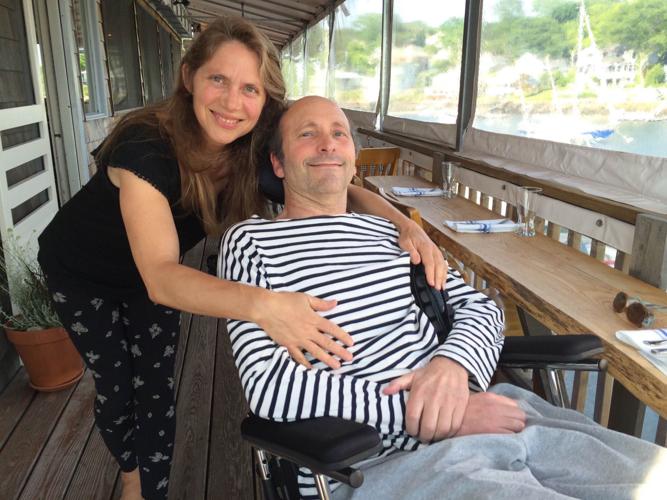 Kylée Smith and her husband, the late Anthony Weller of Gloucester. Weller wrote his final work, “Sonnets of Death and Love,” as a gift to his wife. 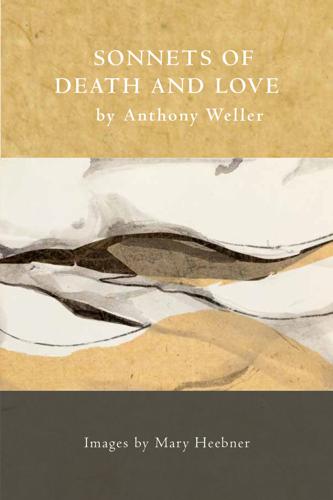 A lifelong musician and writer, Gloucester’s late Anthony Weller wrote his final book to his wife, “Sonnets of Death and Love.” Images are by Santa Barbara artist Mary Heebner. 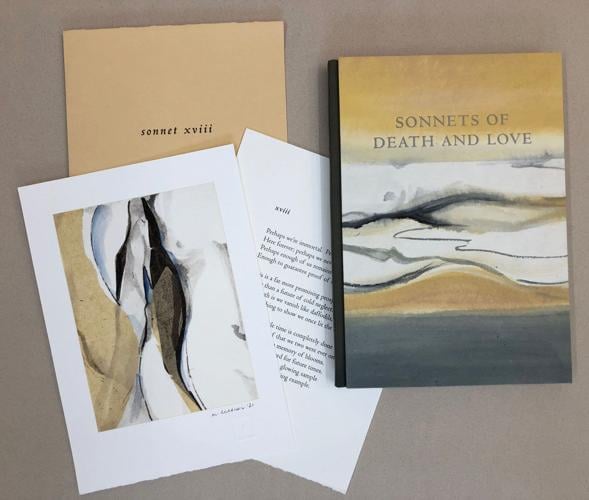 Gloucester’s Anthony Weller left his wife with a book about her and their bond titled “Sonnets of Death and Love.” Pictured is the hand-painted hardbound version with accompanying letterpress broadside and print. The images are the collage work of Santa Barbara artist Mary Heebner. 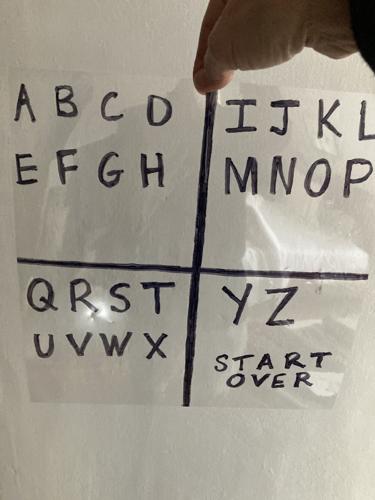 Diagnosed with primary-progressive multiple sclerosis in 2006, which left him paralyzed from the neck down, Gloucester's late Anthony Weller used the blink of his eye to write one letter at a time using a specialized eye board (pictured).

Kylée Smith and her husband, the late Anthony Weller of Gloucester. Weller wrote his final work, “Sonnets of Death and Love,” as a gift to his wife.

A lifelong musician and writer, Gloucester’s late Anthony Weller wrote his final book to his wife, “Sonnets of Death and Love.” Images are by Santa Barbara artist Mary Heebner.

Gloucester’s Anthony Weller left his wife with a book about her and their bond titled “Sonnets of Death and Love.” Pictured is the hand-painted hardbound version with accompanying letterpress broadside and print. The images are the collage work of Santa Barbara artist Mary Heebner.

Diagnosed with primary-progressive multiple sclerosis in 2006, which left him paralyzed from the neck down, Gloucester's late Anthony Weller used the blink of his eye to write one letter at a time using a specialized eye board (pictured).

The mystery of life and love and the machinations of humanity is what drove the late Anthony Weller to write.

He wrote fiction, nonfiction and poetry. But his final work was born of humanity’s greatest emotion — love.

This fall, his wife, Kylée Smith, had a turning point following a memorial service in facing her loss after the first-year anniversary of his death.

Beyond a lifetime of memories and world adventures, Weller left his wife with a book about her and their bond: “Sonnets of Death and Love.”

There is nothing more human than love for which the pain of separation is never more final than in death. Weller used what he knew best, his words, to make the love of his life eternal in poetry. When his terminal illness progressed, and his hands and fingers failed him, he would use the tiny movement of the blink of his eye to write one letter at a time using a specialized eye board.

The couple met in 1992 and fell in love almost immediately. On certain occasions or on a whim, Weller would write poems for Smith, some which later became sonnets for this book. One two-page poem can be read either by each individual page, or reading across the two pages in a twist worthy of Weller’s poetic incantations.

“I had read some sonnets over the years but after his death, they were still too raw for me to read,” Smith said. But after the memorial, she began reading them out loud.

“Poetry should be read out loud. I usually couldn’t finish one without crying and choking up. But I kept reading and I hear his voice, and I hear his voice loud and clear, so close to me, so close to my heart. It was intense and it was incredible but his voice carries on through his words,” said Smith. “It was like he was reading them out loud to me. So I have had a breakthrough. I can read a sonnet a day, which brings me closer to him. I can receive it now on a certain level that I couldn’t in that last year.”

Gloucester’s Gregory Gibson, an author and antiquarian book dealer, wrote of the book: “These breathtaking love poems were written by a man who knew he was about to die. I’ve never read anything like them. Nor have you. This is your chance.”

Up until he was diagnosed with primary-progressive multiple sclerosis in 2006, Weller kept busy working as a jazz and classical guitarist and a journalist. He traveled extensively throughout Europe, Asia, the Middle East, North Africa, the South Pacific, Central America and the Caribbean. He wrote more than 150 articles for National Geographic Traveler, The Paris Review, Forbes, GEO, and The New York Times Magazine, among other periodicals. He received a Lowell Thomas Award for foreign reporting in 1993.

As his disease progressed, Weller left those passions behind but continued to work as a novelist and poet. He was paralyzed from the neck down for the last decade of his life. He wrote by dictation, but with his voice nearly gone, often struggled to sound out words.

Smith noted that although her husband did not believe in reincarnation, he also had written a book about life after death.

“When he got sick, he’d say this is not karma, it’s bad luck,” she recalled.

In 2011, Weller wrote “The Land of Later On,” published by Amazon, about a New York jazz pianist whose career was cut short by a neurological disease. During a failed suicide attempt, the pianist was escorted through the afterlife by Walt Whitman who encouraged the musician to write his memoir when he was revived. The book’s dedication read: For Kylée, “my heaven on Earth.”

“That book brings together his life of extensive travels but he had never researched the afterlife,” said Smith. “It grew organically from his thought processes.”

‘Time of the essence’

In an evolution of his writing, Weller’s final book, “Sonnets of Death and Love,” is also about life and death.

In 2000, Weller met Mary Heebner, an artist based in Santa Barbara, California, when she accompanied her husband, photographer Macduff Everton, on a trip to India for National Geographic. Everton was to work with Weller, who was accompanied by his wife. Thus began a lasting friendship between the two couples.

During a subsequent work trip, Weller saw Heebner’s prototype of a book featuring poems by Pablo Neruda and her artwork.

“I showed Anthony my mockup and he pointed out some interesting visual things as a translator as well as a writer that made the book better, and that bonded our friendship,” said Heebner.

That bond was mutual.

“After seeing Mary’s extraordinary books devoted to Neruda, I knew I wanted to work with her. This collaboration is the happy result,” wrote Weller in his author’s note.

Heebner recalled being contacted to work on this book in an email from Weller, who by then was a quadriplegic.

“He said ‘I have a proposal for you’ related to a sequence of sonnets. He was at sonnet 31 — and it became 40,” she recalled. “He related that as his voice was waning and he was getting nearer to the inevitable, the sonnets assumed a greater importance to him. He asked if I would consider giving a treatment for his sonnets as I had done with the Neruda book.”

She replied that it would be an honor to render some images to accompany his words and it would be a project most dear to the artist.

Marriage of art and poetry

In a sort of kismet, Heebner knew exactly what artwork would pair with Weller’s sonnets.

“For years I had been drawing sketches from ancient Greek and Roman sculpture, working inward from the human form. I made this particular series of small collages beginning on New Year’s Day in Rome in 2016 that I never wanted to break up. It could not have been a more perfect match,” she said.

Weller agreed, after which Heebner worked to find the best way to design, print, and reproduce the images and text for the book. She created 20 special hard-bound books, each with an original painting on the front and back covers, as well as 200 paperback copies, signed by Heebner and by Weller with his thumbprint.

“He was a serious kind of person but he also has this understated mischievous humor,” Heebner said “He took his work, whether his music or writing, very seriously and it was the focus of his life, and I wanted the book to be of the best quality.”

In her artist’s note, Heebner wrote: “Anthony and Kylée’s love for one another is sensual, true and enduring, and so it seemed fitting to pair his sonnets with art inspired by classical sculpture. ... It is a blessing and a joy to discover in these pictures a deeper voice when paired with Anthony’s sonnets.”

The book is available at anthonyweller.com, Dogtown Books or the Bookstore of Gloucester.

Gail McCarthy can be reached at 978-675-2706, or at gmccarthy@gloucestertimes.com