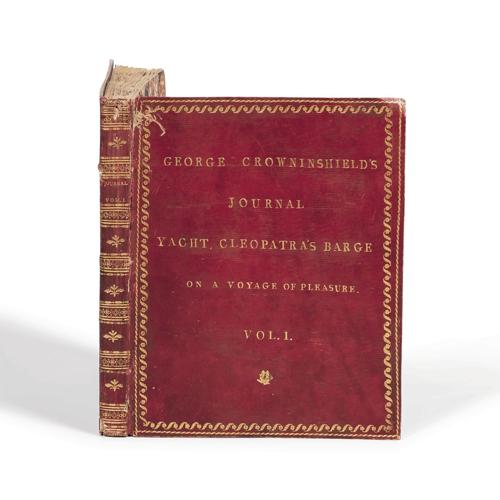 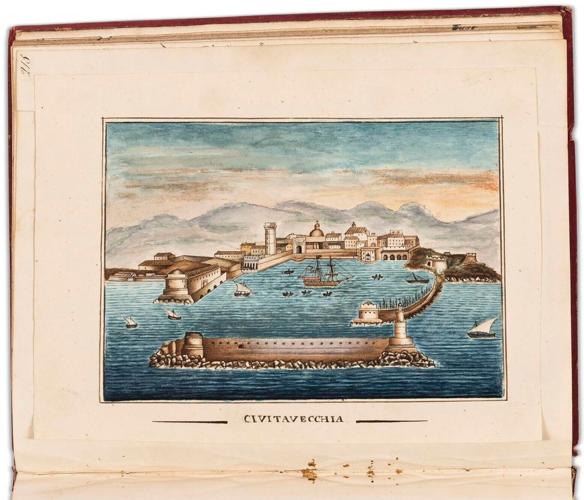 A page from George Crowninshield’s journal, “Cleopatra’s Barge On A Voyage of Pleasure.”

A page from George Crowninshield’s journal, “Cleopatra’s Barge On A Voyage of Pleasure.”

SALEM — If you think the luxury yachts that pull into ports like Boston draw oohs and ahhs from onlookers, imagine how people felt when they saw George Crowninshield sail into town.

Crowninshield’s boat, Cleopatra’s Barge, is now regarded as America’s first pleasure yacht. In 1817, Crowninshield left port from his hometown of Salem on his extravagant new vessel and spent the next six months drawing large crowds at various stops throughout the Mediterranean.

Crowninshield’s journal of that trip, “Cleopatra’s Barge On A Voyage of Pleasure,” was recently rediscovered and is now up for sale as part of an auction of Americana held by the auction house Bonhams Skinner. An online auction started Aug. 6 and runs until Aug. 16, with a live sale on Aug. 13 in Bonhams Skinner’s galleries in Marlborough.

“Once in a while you see an object that you can truly declare to be a one and only, unique, and I think this can be described as such,” said Stephen Fletcher, the director of American Furniture & Decorative Arts at Bonhams Skinner.

The Crowninshields were a prominent Salem shipping family. Benjamin Crowninshield, George’s brother, served as Secretary of the Navy under President James Madison. When their father died in 1815, George “found himself both rich and footloose” and resolved to build a vessel that would “beguile his new leisure,” according to a 1953 story about Cleopatra’s Barge in the journal The American Neptune.

The new yacht attracted lots of attention when it was first launched in Salem. When word spread about its luxurious cabin, “all of Salem came to inspect the marvels,” according to The American Neptune. The Peabody Essex Museum in Salem has a reconstruction of one of the interior rooms of Cleopatra’s Barge on display as part of a permanent installation of American art.

In his 200-plus-page journal, Crowninshield commented on everything from the dignitaries who visited his ship to the local flora and fauna. In one letter included in the journal, he wrote, “I have visited many Ports since I wrote to you, at all of which I have been received in the most flattering manner, and my vessel has been crowded with the inhabitants. She is much admired by all who have visited her and is considered far superior to any British yachts in the Mediterranean.”

In addition to Crowninshield’s narrative, written out long-hand by a clerk, the journal includes “finely executed water color artwork” of the various ports the ship visited, said Chris Fox, Bonhams Skinner’s director of historic arms and militaria. Fox said the maker of the artwork is unknown.

“It’s this really remarkable document of the voyage from the narrative standpoint as well as providing a visual window into the places that they visited,” Fox said.

Fletcher said Crowninshield’s journal was found three months ago in the estate of Warren Little, of Cambridge, packed safely in an archival box in the attic along with a collection of other historic documents. Little’s father, Bertram Little, had purchased the journal in 1949.

“When thinking about it now, I get these goosebumps,” Fletcher said of the discovery. “’Cleopatra’s Barge’ is a very exotic tale indeed. It’s always fascinated a lot of people.”

Staff Writer Paul Leighton can be reached at 978-338-2535, by email at pleighton@salemnews.com, or on Twitter at @heardinbeverly.

Staff Writer Paul Leighton can be reached at 978-338-2535, by email at pleighton@salemnews.com, or on Twitter at @heardinbeverly.