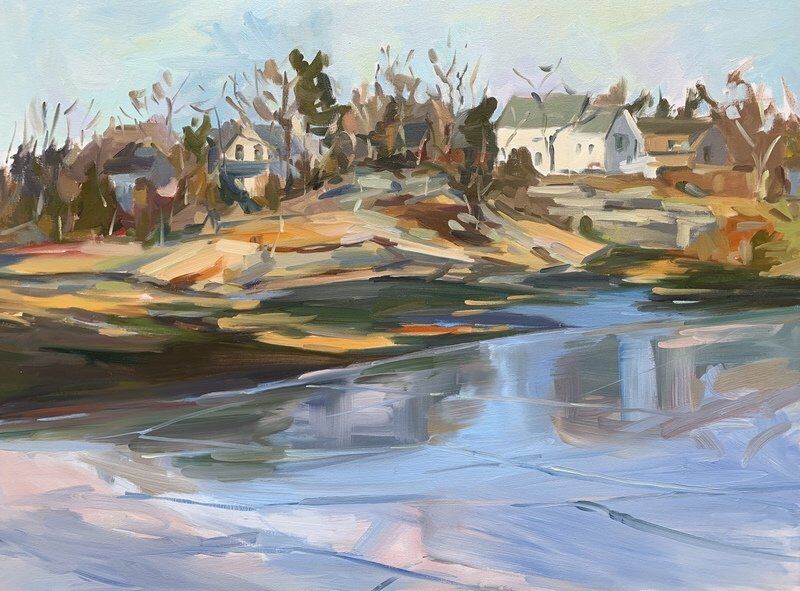 Courtesy image/"Quarry Ice," was painted by Vanessa Michalak of Gloucester, one the first artists to find creative refuge at the Manship Artists Residency + Studios in Lanesville during the COVID-19 pandemic last year. 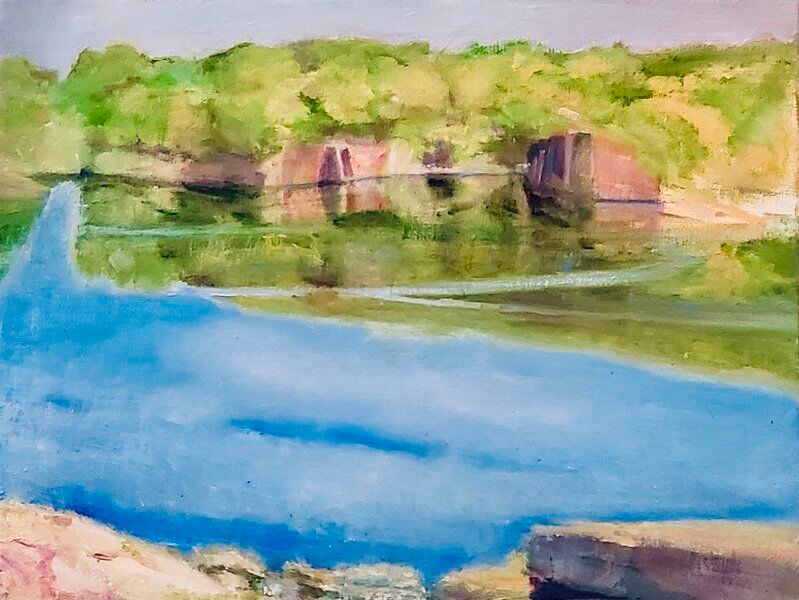 Courtesy image/A work by Gloucester's Peter Herbert, who was among the nearly 100 artists who spent time at Manship Artists Residency + Studios during the COVID-19 pandemic last year.

Courtesy image/"Quarry Ice," was painted by Vanessa Michalak of Gloucester, one the first artists to find creative refuge at the Manship Artists Residency + Studios in Lanesville during the COVID-19 pandemic last year.

Courtesy image/A work by Gloucester's Peter Herbert, who was among the nearly 100 artists who spent time at Manship Artists Residency + Studios during the COVID-19 pandemic last year.

The artistic enclave at the Manship Artists Residency + Studios continues to be a fountainhead of inspiration, even during the global COVID-19 pandemic.

In 2020, the nonprofit, based on the historic property of an artistic family, served nearly 100 artists with a creative infusion as they worked outside on the 15 wooded acres, nestled between two quarries, in Gloucester's Lanesville neighborhood.

The idyllic setting was the home of sculptor Paul Manship (1885-1966) who may be best known for the golden Prometheus fountain at New York City’s Rockefeller Center.

The work of many of these artists is now part of the virtual exhibition "Outside @ Manship," which grew from the organization's response to the pandemic.

"The idea was to provide a place for artists living and working on Cape Ann and allow them to work on the beautiful grounds during the summer and fall of 2020," said Rebecca Reynolds, Manship's executive director. The artists followed the necessary protocols to ensure their safety.

"We are launching this exhibition to honor the past and the present in spite of uncertainty, to honor the constancy of the work made by artists on Cape Ann and beyond, who create memory and beauty," Reynolds said.

The virtual exhibition features 57 of the 82 artists.

Artists in the show

Vanessa Michalak early on found creative refuge on the property. An essential worker as a nurse, she craved the opportunity to paint in such a welcoming environment. The Maine native lived in the Boston area until she moved to Gloucester in 2017.

"I've done residencies in other states but it's nice that the (Manship residencies) included artists from their own community," Michalak said. "The property is visually inspiring and it feels different even coming from downtown Gloucester. I like that quiet space and being in nature. I also love the history of the property and knowing it's been a home and an inspiration for many other artists."

Michalak's new project focusing on doing portraits of nurses and getting narratives of their experience working during the pandemic.

Another artist in the exhibition is 80-year-old Peter Herbert, a New York City lawyer who retired to Annisquam with his wife, a Gloucester native.

His experience during the pandemic became a family affair.

"I went there with my son, Ben, and it was the two of us painting 15 yards apart," said Hebert. "We had the best time, and apart from the inspiration that the space itself gives you, just being together, the two of us, was such a gift. We actually paint better when we paint together — and it is a magnificent space to paint."

He explained that being a lawyer for 40 years, he was desperate to do something creative. He gave up playing piano as an outlet, and around the age of 40, began painting and took classes at the Art Students League of New York and later a found a teacher in Brooklyn.

How the residencies worked

Reflecting on the activity at the Manship Artists Residency + Studios (MARS), Reynolds noted that its board is thankful that the organization has been able to quietly continue its work.

"We are so grateful to have been able to provide a meaningful purpose during this difficult time. Despite the fact that many artist residencies and cultural organizations had to shutter themselves during the pandemic, MARS was able to remain open," she said. "We realized that we had an asset that could be utilized during COVID. If we were careful, we could provide solitude in a tranquil place to artists living and working on Cape Ann for a little while. We want to shine a special light on our local artists as they continue to provide inspiration and hope to our community in the face of all the hardship this global crisis has wrought."

The work for "Outside @ Manship" began on June 15, 2020 when four artist members of Rockport Art Association & Museum arrived at the pristine setting.

"Over the course of the summer and fall, members of Rocky Neck Artist Colony and the North Shore Arts Association also came to Manship. The artists showed up, masked, carrying in everything they needed to work. They were greeted, confirmed that they understood the program guidelines, and then left alone to spend time away from everyday concerns. Manship has been a place where artists have gathered for more than eight decades. It is a place where the past and the present are very much alive," according to Meri Jenkins, a Manship Artists advisor who suggested the idea for this program.

Initially, a morning and afternoon session with four artists were organized with ample room to be socially distant on the sprawling grounds.

"We were thrilled when registrations began to appear in late May. Based on feedback from the first two sessions in June and August, we increased the duration to a full day's visit and provided for six artists in the October session," noted Reynolds. "Additionally, there was an artist from Washington, D.C., who planned to paint in France last summer, but who found herself in Gloucester instead. Through a friend, she learned about MARS and asked to come and paint on site. She's now plans to come back to Cape Ann next summer even if she is able to travel abroad."

Prior to the pandemic, the property became a haven for those in the film industry. The location wash a staging area in August and September of 2019 for the crew of the recent Sundance award-winning film "CODA."

"What was especially rewarding about having over 100 crew members on the Manship 'set' was having one of them express how they felt appreciated by us and how they felt that we were treating them as artists — he said that this normally didn't happen. We recognize that just about everyone on a film set is an artist of some sort, whether they work on makeup, lighting, sound, videography, or acting. As a significant working-class artist community, supporting working artists is deep in our roots and heritage. And no doubt the film crew bonded and felt equally supported by our fishing community," said Jo-Ann Castano, Manship Artists Board chair.

Another initiative during the pandemic served another 12 artist "residents,"  all who were local or  Massachusetts artists staying in the state due to safety concerns and travel restrictions, bringing the number of artists served by MARS in 2020 to 94, noted Reynolds.

Two out-of-state artists who were scheduled to visit MARS and could not do so, were able to take part in a virtual residency. The first is Erika Senft Miller of Vermont, who is developing a process of inquiry and collaboration for a future multi-sensory public art project in Gloucester thanks to a grant from the New England Foundation for the Arts. The second is Marc Zegans of California who was scheduled to launch his new book of poetry with public programming while in residence. Instead, he has been working with local photographer Tsar Fedorsky. Reynolds said they are exploring ways to share the mystical photographic essay that has evolved from this innovative collaboration.

What: Manship Artists Residency + Studios in Gloucester presents the new virtual exhibition, "Outside @ Manship," featuring the work of nearly 60 artists, which can be viewed at  www.manshipartists.org.

Related media: "Outside @ Manship Artists Salon," a virtual Zoom series, highlights Manship's support of 94 artists during the pandemic and the resulting online exhibition. The conversations featuring artists and those familiar with the Manship story will take place from 7 to 8 p.m. Thursdays in March and April. Registration required. Zoom space is limited so it is advised to sign-up in advance to secure a spot at ManshipArtists.org. The series is as follows:

What brought him to Cape Ann? What did he create here? Many Cape Ann locals are surprised to learn that the artist who modeled one of the most recognizable sculptures in the world — New York City’s Prometheus Fountain at Rockefeller Center — was sculpted by an artist whose summer residence and work studio is in Gloucester. Join Paul Manship’s grandson Erik Natti, Manship’s neighbor and local historian Pru Fish, and Manship Artists founder and American sculpture specialist Rebecca Reynolds for this conversation.

March 18: Do you see the world inside out?

A delightful happenstance of having artists come to Manship was that some chose to paint in the same place on the grounds on different days. They worked in the exact same locations where their painter friends had painted on other occasions unbeknownst to themselves. The work they each produced is remarkably different. Join Janet Sutherland, Patricia McCarthy, and John Caggiano as they talk about their time at Manship, their work, and how they developed as artists in their unique way.

April 1:  Alone with words or what is Manship Artists?

Residencies provide artists uninterrupted time to reflect, dive deep into questions that may have been puzzling them, and to produce work in a supportive environment outside of their usual surroundings and away from the concerns of their everyday lives. Come celebrate the first day of National Poetry Month. Meet two poets who benefited from time at Manship as they share what happened while they were there. Meet Charles Coe, the author of three books of poetry and an adjunct English professor at Salve Regina University, and poet Monica Manoski, who is an artist, community organizer, Reiki practitioner, and executive director of the Essex Art Center in Lawrence. Her first book, a collection of poems and black and white film photography, is titled "sisters in this ritual."

Artists give us an opportunity to see things differently, in ways that are engaging, unexpected and perplexing. Our view of the world can be turned upside down and inside out by looking at artwork of a place that we may recognize, but which is rendered in such a way as to invite us to look again. Join Outside @ Manship artists Heidi Caswell Zander, Andrew Fish and Donna Caselden as they talk about the way they see the world.