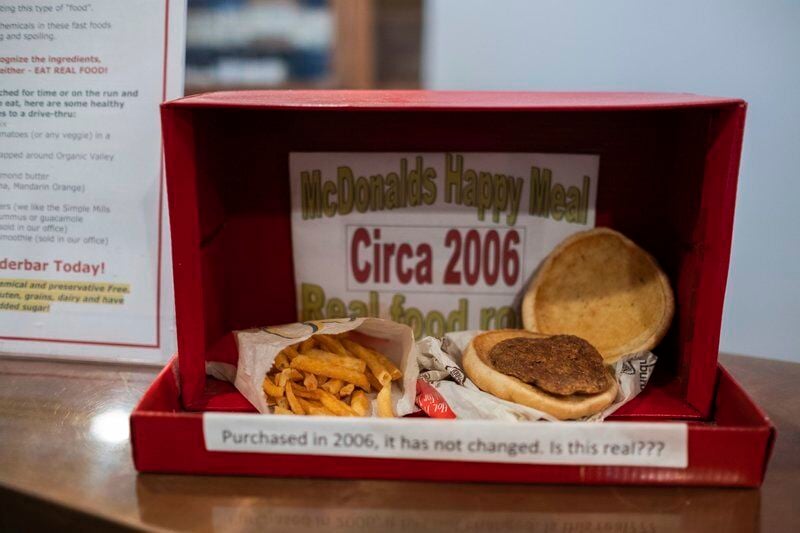 RYAN MCBRIDE/Staff photoA McDonald’s Happy Meal from 2006 sits in a box at Healthcare Complete, a chiropractic and wellness center in Newburyport. The unusual, and apparently durable, meal can be seen at the receptionist desk. 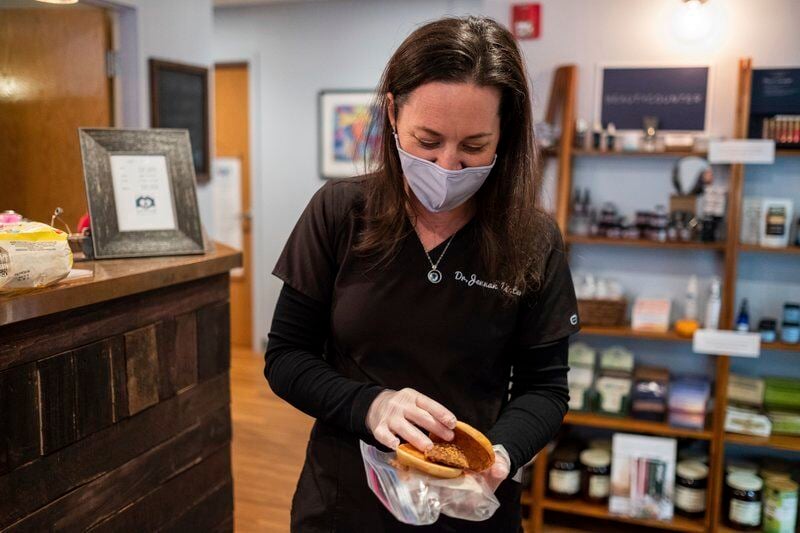 RYAN MCBRIDE/Staff photoDr. Jennah Dieter, a chiropractor and clinical nutritionist at Healthcare Complete in Newburyport, shows a burger from a second McDonald’s Happy Meal purchased in 2010.

RYAN MCBRIDE/Staff photoA McDonald’s Happy Meal from 2006 sits in a box at Healthcare Complete, a chiropractic and wellness center in Newburyport. The unusual, and apparently durable, meal can be seen at the receptionist desk.

RYAN MCBRIDE/Staff photoDr. Jennah Dieter, a chiropractor and clinical nutritionist at Healthcare Complete in Newburyport, shows a burger from a second McDonald’s Happy Meal purchased in 2010.

NEWBURYPORT — A hamburger Happy Meal purchased almost 15 years ago has yet to show any signs of rot, mold, discoloration or aging.

Dr. Jennah Dieter, a certified chiropractor and clinical nutritionist at Healthcare Complete in the Towle Building, said the Happy Meal was purchased on Feb. 14, 2006, and she has used it as an educational tool for her patients since joining the practice in 2008.

The hamburger and fries sit openly in a shoebox display in the lobby of the wellness center with a sign alongside it encouraging people to consider healthier options when they’re “on the run” such as apple slices with almond butter, any type of whole fruit or vegetable, or homemade trail mix.

The hamburger has shrunk a bit over the years and now feels hard like a hockey puck. The bun and fries have not changed other than hardening over time.

Dieter even purchased a second Happy Meal on Aug. 12, 2010, which she has kept in plastic bags to compare to the other display. She said the only difference is the fries look more golden and ready to eat, but that could be because more hands have touched the 2006 meal, which has been openly on display.

Dieter still has the original toy and packaging for both Happy Meals, pointing out that the paper bag has disintegrated faster than the food.

“I just wanted to show people that real food rots,” she said. “Real food should mold and go bad.”

Dieter said she does not intend to “food shame” anyone and just wants others to look closer at the ingredients they put in their body, especially steering clear of trans fat and preservatives.

She also recognized that McDonald’s is not the only offender. She suggested a Twinkie, a dinner roll or a meal from another fast-food restaurant could produce similar results.

“We just try to educate our patients to eat real food, eat clean and the body will heal itself,” Dieter said. “You want to keep the immune system strong. It’s so important right now. There’s not much education on how to do that, so we’re just trying to be that resource for our patients.”

Chris Frisch, a nutritional therapy practitioner and chiropractic assistant at Healthcare Complete, said people don’t have to go to specialty stores to find foods without preservatives. If someone wants a dinner roll, for example, just look in the bakery section of a supermarket or shop at a local bakery.

Dieter said a lot of her patients are already educated on these types of foods but having the display in the lobby encourages them to share this information with others. The simple act of sending a photo of the Happy Meal display can start the conversation with family and friends.

Recently, Dieter checked the McDonald’s website and noticed that preservatives such as TBHQ, BHT and BHA, which she said reduce immunity and cause food allergies and dermatitis, are no longer listed as ingredients.

A spokesperson for McDonald’s confirmed that in 2016, the company stopped adding TBHQ to its oil, which was previously used to cook French fries and chicken McNuggets.

The spokesperson also said BHT and BHA are not ingredients used in its menu items.

In response to claims that its burgers do not decompose, the company provided a link to a statement from Aug. 31, saying the idea that its food does not decompose is a “myth.”

The company said it all comes down to the environment the food is in.

“Without sufficient moisture – either in the food itself or the environment – bacteria and mold may not grow and therefore, decomposition is unlikely,” the statement noted.

The statement also noted that the company only uses 100% beef patties with “no preservatives or fillers,” and only a bit of salt and pepper.

More information on Happy Meal ingredients may be found at www.mcdonalds.com/us/en-us/meal/hamburger-happy-meal.html

The company’s response to claims that its burgers do not decompose may be found at https://corporate.mcdonalds.com/corpmcd/en-us/our-stories/article/FoodQuality.burger-myths-busted.html.

Heather Alterisio may be contacted at halterisio@gloucestertimes.com