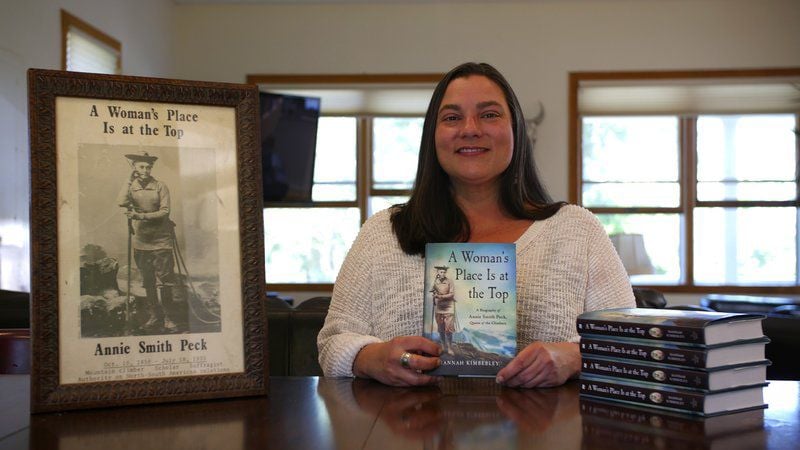 Courtesy photoGloucester resident Hannah Kimberly's "A Woman's Place Is at the Top," a biography of Annie Smith Peck, known as "queen of the climbers," comes out Tuesday. She will speak about Peck and the book Wednesday at Sawyer Free Library. 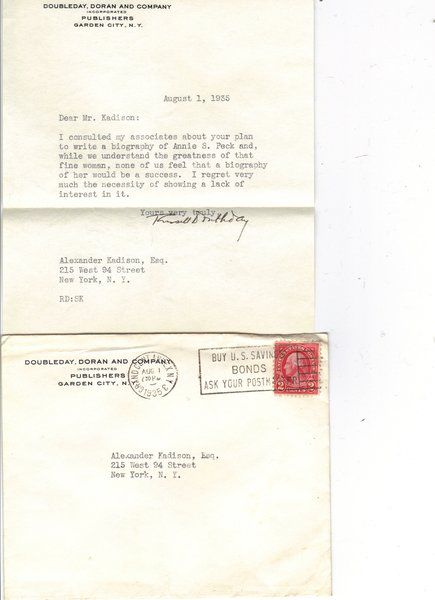 Courtesy photoAn Aug. 1, 1935, letter from Russell Doubleday of the Doubleday publishing company rejecting a pitch for a biography of Annie Smith Peck. St. Martin’s Press is publishing Gloucester resident Hannah Kimberley’s “A Woman's Place Is at the Top” 82 years later to the day.

Courtesy photoGloucester resident Hannah Kimberly's "A Woman's Place Is at the Top," a biography of Annie Smith Peck, known as "queen of the climbers," comes out Tuesday. She will speak about Peck and the book Wednesday at Sawyer Free Library.

Courtesy photoAn Aug. 1, 1935, letter from Russell Doubleday of the Doubleday publishing company rejecting a pitch for a biography of Annie Smith Peck. St. Martin’s Press is publishing Gloucester resident Hannah Kimberley’s “A Woman's Place Is at the Top” 82 years later to the day.

Gloucester author Hannah Kimberley believes Aug. 1 is an uncannily auspicious day for her biography of Annie Smith Peck to be published.

It was on another Aug. 1st — in 1935 — that the first proposal for a biography on Peck was rejected by Doubleday, the famous New York publisher. In a letter to the would-be biographer, Russell Doubleday himself lamented the decision, despite "the greatness of that fine woman," because "a biography of her would not be a success."

Eight decades and two years later to the day, St. Martin’s Press is publishing Hannah Kimberley’s meticulously researched biography “A Woman's Place Is at the Top.” And it is worthy not just of “that fine woman” herself, but of a 21st century audience that's finally ready for the likes of her.

Born in 1850, trailblazing mountaineer Annie Smith Peck would have been right at home in the global village that is planet Earth, circa 2017. Like the Nike slogan “Just do it,” she just did it. Like the Apple slogan “Think Different,” she thought different — causing what Wikipedia describes as “a serious hullabaloo in the press” — not for daring to conquer the highest mountains in the Alps and the Andes, but for daring to wear a pair of pants to do it.

As Hannah Kimberley —who began her biography as a dissertation and is nowadays considered the go-to authority on Peck— says in the introduction of “A Woman's Place Is at the Top,”  when she first stumbled upon her 10 years ago, Peck “was the most famous feminist nobody had ever heard of.”

Annie Smith Peck was famous. As anyone attending Wednesday night’s reading of her biography at the Sawyer Free Library will learn, her hugely famous young fan Amelia Earhart said she “felt like an upstart compared to Miss Peck."

Why then, did Peck vanish from the radar screen of historical American trailblazers? Perhaps, says Kimberley, because she did not, like Earhart, vanish mysteriously at a tragically young age. Nor, quite frankly, did she have Earhart’s winsome looks, or money. And then, she was something which, quite frankly, was not exactly the thing for women to be when she was coming of age back in the latter half of 19th century: unabashedly brilliant.

Annie Smith Peck was raised in a moderately prosperous family of good standing in Providence, Rhode Island, a town she described as “duller than the back of an axe” and from which, as soon as she could, she fled. Refused admission to Brown University, where her three brothers studied, she went off on her own to Michigan, where she first taught and then was one of the first women admitted to the University of Michigan. After graduating, she embarked on long, unfulfilling years teaching at various American schools and colleges.

Finally saving enough money, she fled yet again, this time to Europe, where, in the mountains of Italy and Switzerland she at last began her comet-like ascent to becoming her singular self.  Peck, who for most of her life claimed she was 10 years older than her actual age, was in fact a late-blooming 45 years old when —against all odds — she famously climbed the Matterhorn. If she seemed to take this feat in her stride — and she did, despite the fact that 18 other climbers were lost to the Matterhorn that summer — it may have been because she had, in her family, faced a more formidable challenge.

Motivation comes in many forms, and for Peck, nothing seemed to encourage her more than the discouragement she met from her very conventional family every inch of her very unconventional way. Her straight-laced mother simply did not know what to make of her daughter. Her status-conscious brothers, though loving, were equally flummoxed, using money — or the withholding of it— to discourage Annie from her expensive follies.

If Peck had a mantra, it was: I’ll show you. So a century and a half before Kickstarter and GoFundMe, she became her own social media machine. A talented writer, linguist, and classical scholar, she financed her mountaineering with her writing, selling her tantalizing tales of high risk at high altitudes for exclusive publication in newspapers and magazines.

Fortunately for Hannah Kimberley, Peck was a meticulous keeper of her own archives. And fortunately for Peck, Kimberley has used them — in all their voluminous and magnificent minutiae — to great effect, bringing to life every step, every slip, every swing of the axe of every climb and cliff and life-threatening crevasse with a you-are-there quality that at times makes a reader wonder: are we gonna get out of here alive?

She was accused of being reckless, of driving her hired guides mercilessly. But because she was operating at all times on a self-financed shoestring, she could not afford — as could other, well patronized expeditions led by men — the luxury of abandoning climbs that, usually due to weather, became increasingly high-risk ventures.

She was called “manly” by many a man, but when she was not scaling mountains, Peck was in fact a fashionista, fond of silk and lace. Described in person as warm and witty, she found in the lucrative lecture circuit a viable financial resource, which, combined with her writing, enabled her to finance ever more ambitious climbs, conquering the highest peaks in the Andes, and becoming an expert on and proponent of Pan-American relations.

In later life, Peck was a leading feminist, and revered heroine to her fellow members —including Amelia Earhart — of the Society of American Women Geologists. A political activist, she once walked into the White House and announced that she thought the president might like to see her; and true to her word, Teddy Roosevelt did. This is just one out of countless moments that Kimberley has reconstructed through assiduous research and woven together on virtually every one of the 347 pages of her biography.

In her acknowledgements, Kimberley thanks the staff of New York City’s Brooklyn College archives for their help in providing her access to Peck’s paper, journals and writings. Altogether, there were 33 boxes brimming with them, and she left no box unturned in recreating Annie.

“When I first showed up and they asked me which of the archives I was interested in seeing. I said all of them,” Kimberley said. “Wow, they said. You really are a rookie!”

Well, she isn’t any more.

Staff writer Joann MacKenzie may be contacted at 978-675-2707, or jomackenzie@gloucestertimes.com.

Due to a reporter's error, the wrong date for Hannah Kimberly's reading of her book was listed in the original version of this story, published online and in print.

What: Gloucester author Hannah Kimberley reads from her new biography, "A Woman Belongs at the Top: Annie Smith Peck, Queen of the Climbers."

About the author: Hannah Kimberley holds a doctorate in philosophy, and is an author and president of the Cape Ann League of Women Voters. She is a graduate of and former professor at Virginia's Old Dominion University.  She and husband, Craig, a videographer noted for his aerial videos of Gloucester Harbor, have lived in Bay View for the past five years. Hannah is adapting this, her first biography, for middle schoolers, and welcomes their feedback.