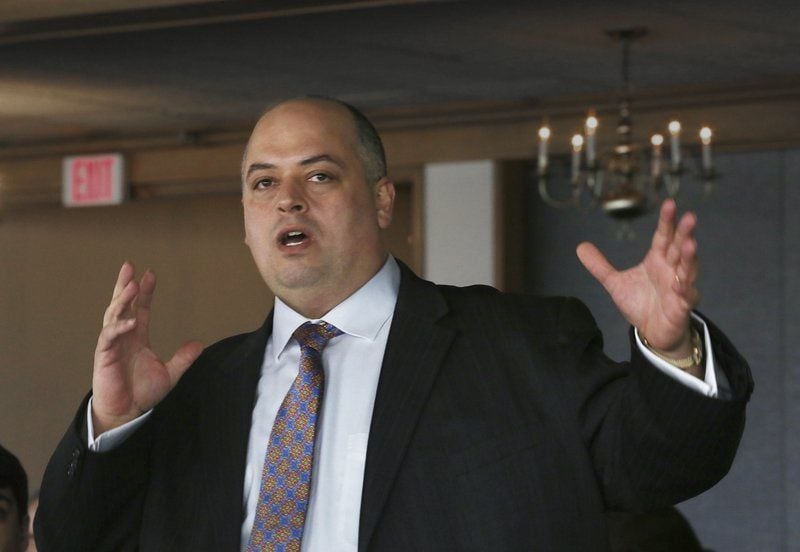 MIKE SPRINGER/Staff photo Gloucester Economic Development Director Sal Di Stefano speaks about the city’s request for $151,000 in state money for its “Gloucester Fresh Seafood” branding campaign during a meeting Tuesday of the state Seaport Economic Council at Tavern on the Harbor in Gloucester. 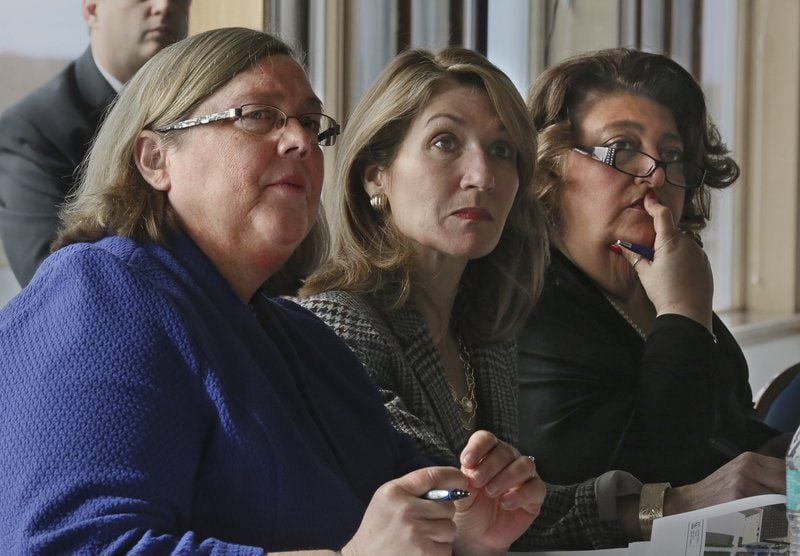 MIKE SPRINGER/Staff photosListening to testimony Tuesday during a meeting of the state Seaport Economic Council are, from left, Deputy Secretary of Housing and Economic Development and former Gloucester Mayor Carolyn Kirk, Lt. Gov. Karyn Polito and Gloucester Mayor Sefatia Romeo Theken. The meeting was at Tavern on the Harbor in Gloucester.

MIKE SPRINGER/Staff photo Gloucester Economic Development Director Sal Di Stefano speaks about the city’s request for $151,000 in state money for its “Gloucester Fresh Seafood” branding campaign during a meeting Tuesday of the state Seaport Economic Council at Tavern on the Harbor in Gloucester.

MIKE SPRINGER/Staff photosListening to testimony Tuesday during a meeting of the state Seaport Economic Council are, from left, Deputy Secretary of Housing and Economic Development and former Gloucester Mayor Carolyn Kirk, Lt. Gov. Karyn Polito and Gloucester Mayor Sefatia Romeo Theken. The meeting was at Tavern on the Harbor in Gloucester.

For former Gloucester Mayor Carolyn Kirk, it was a rare home game in her role as the executive secretary of the state’s Seaport Economic Council. For the city, it was another step forward in its efforts to brand and market its seafood and seafood businesses.

The Seaport Economic Council and its chairwoman, Lt. Gov. Karyn Polito, rolled into Gloucester on Tuesday morning, meeting for more than two hours at the Tavern on the Harbor and awarding 10 state grants worth $5.15 million to 10 Massachusetts entities — including $151,000 to the city’s Gloucester Fresh Seafood Innovation Program.

The Gloucester grant, according to city Economic Development Director Sal Di Stefano, will help the city expand its campaign to promote its seafood harvest locally, regionally and nationally. That expansion includes the nine-day rental of two digital billboards along Route 1 in advance of the city’s participation in the annual Seafood Expo North America in Boston during the first week of March.

Di Stefano said the billboards alone are expected to convey the city’s branding message to at least 400,000 commuters during the city’s run on them.

He said the grant money also will be used to defray the city’s overall costs of participating in the Seafood Expo North America show and the Boston Seafood Festival in each of the next two years.

“We also plan to use some of the funds to help us pursue our goal along with the Gloucester Fishermen’s Wives Association to begin approaching large institutional food servers, such as hospitals, universities, restaurants and hotels to try to convince them of the benefits of the Gloucester Fresh brand,” Di Stefano said.

On the dais, Polito was flanked on her right by Kirk, who served into her fourth term as the city’s mayor before accepting the position of deputy secretary of housing and economic development within the administration of Gov. Charlie Baker, and on the left by current Mayor Sefatia Romeo Theken, who succeeded Kirk in office.

Polito, at one point, looked to her left and then to her right at succeeding generations of Gloucester mayors, put her arms around both and quipped: “I’m sitting between two mayors of Gloucester. That’s not lost on me, at all.”

Kirk clearly seemed pleased to be able to help bring the council deliberations to Gloucester — particularly on a day when the city was in line to receive the state grant.

“The city of Gloucester has great momentum right now,” Kirk said at the end of the meeting. “That momentum, that I was part of when I was mayor, is continuing full force. It’s really gratifying to see the continuity in the issues that the mayor has focused on. My view, now from Boston, has given me an even greater appreciation for the course the city is on.”

Gloucester was one of only two coastal communities north of Boston to receive money in this round of the Seaport Economic Council’s funding. Nahant received $410,000 to reconstruct and stabilize its town wharf.

In January, Gloucester was one of only 27 communities nationwide — and the only one in the Northeast — to be chosen as a beneficiary of a White House in-kind grant that will help it flesh out its strategy for promoting its ocean-to-table concept and develop innovative local food programs.

With the expansive tableau of the city’s Outer Harbor filling the Tavern’s windows, Romeo Theken delivered welcoming remarks that included an impassioned advocacy for confronting challenges on a regional basis. Then council members quickly began moving through the agenda.

The members listened to presentations from each of the successful grant applicants, with Di Stefano the last to step to the podium when it was time to deliver Gloucester’s pitch.

“We’re protecting our heritage, our fishermen and our history,” Di Stefano told the council members. “We cannot sit idle or we will lose our market share.”

Just then, volunteer servers and Tavern staff entered the dining room and served bowls of the Gloucester Fishermen’s Wives Association’s redfish soup — the same recipe that the city served free to more than 15,000 visitors combined at last year’s Seafood Expo and Boston Seafood Festival — to the council members and audience.

The soup, which appears to be on the verge of developing a cult following, did not seem to harm the city’s prospects. Quite the contrary, actually. Several participants even brought some home with them.