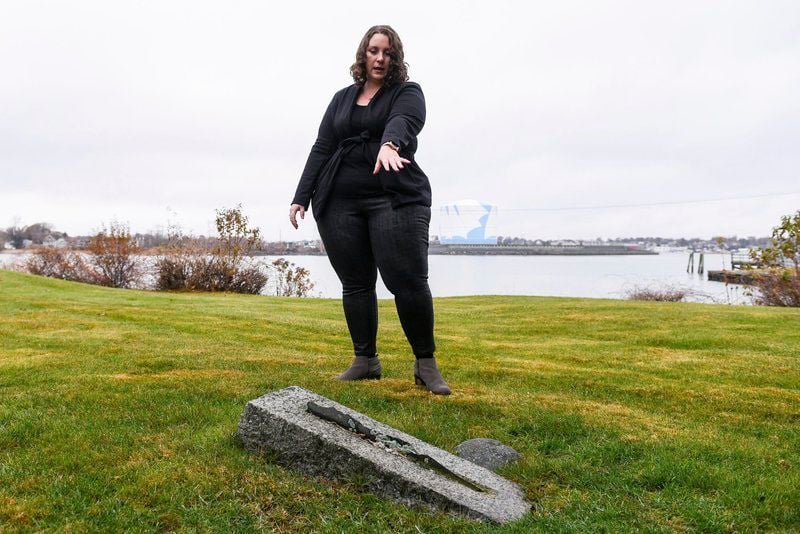 JAIME CAMPOS/Staff photoJen Ratliff points out a defaced tombstone along Collins Cove in Salem. Ratliff has been working to get the lost hospital burying ground recognized and memorialized. 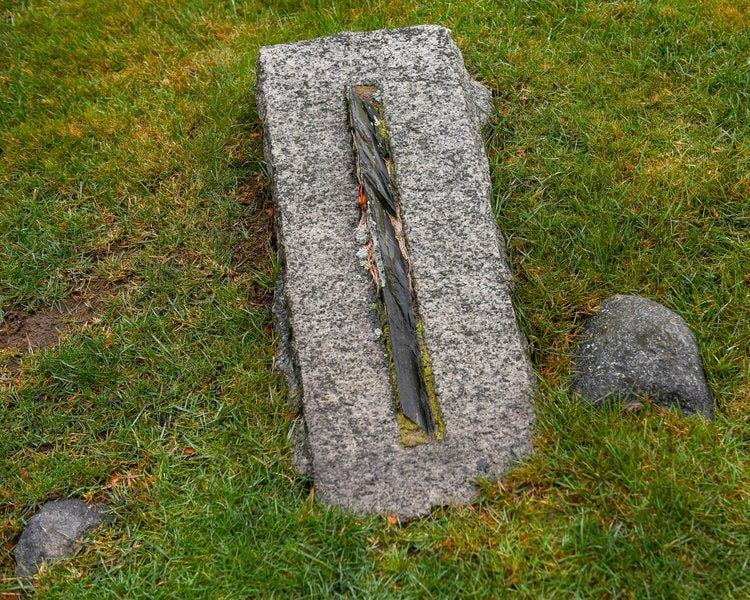 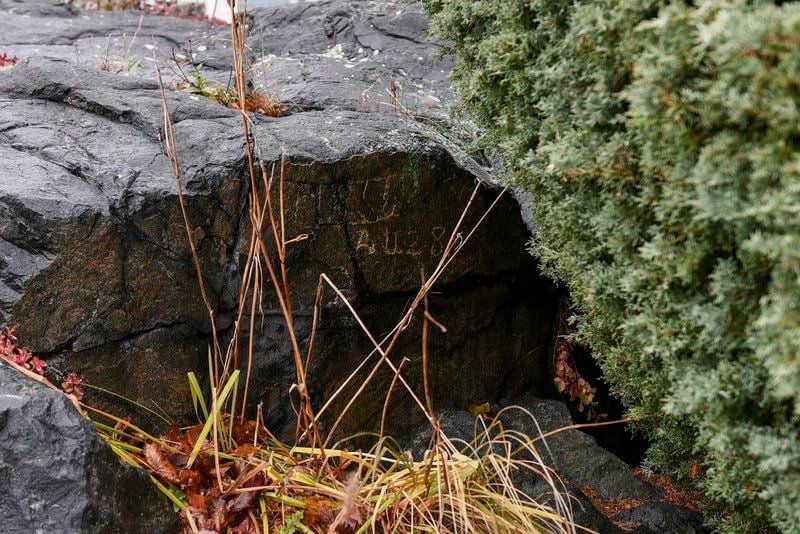 JAIME CAMPOS/Staff photo An unknown marker with the year “1866” inscribed on a rock along Collins Cove.

JAIME CAMPOS/Staff photoJen Ratliff points out a defaced tombstone along Collins Cove in Salem. Ratliff has been working to get the lost hospital burying ground recognized and memorialized.

JAIME CAMPOS/Staff photo An unknown marker with the year “1866” inscribed on a rock along Collins Cove.

SALEM — On Collins Cove, about 20 feet from a home on Settlers Way, a stone crowned with a row of slate shards juts out from the ground.

The stone marks the burial site for a person who died of an unknown cause at the Almshouse, a city-run hospital that served the poor for nearly 150 years until it was shut down in the 1950s.

It’s also the last vestige of a larger graveyard for the impoverished residents, immigrants and others who died at the Almshouse after contracting smallpox and other infectious diseases without the means to pay for care.

Most people don’t know that it exists. Neither did local historian Jen Ratliff, who first noticed the broken marker while walking in the area. There’s a public path behind the Settlers Way condominium complex that leads directly to the burial site, but little that explains why it’s there.

It wasn’t until Ratliff started researching the area more than a year ago that she learned the history of the Almshouse and its cemetery. Ratliff has discovered that at least 32 people were buried there.

“Largely, that history is unknown — or not well documented,” she said. “The people that are buried there were less fortunate in life. They were often forgotten and, in death, they became unclaimed — but they deserve to be part of Salem’s story. They’re part of what made the city what it is. They’re our ancestors, and they deserve to be properly marked and respected.”

Ratliff is spearheading an effort to put a commemorative marker at the site, recognizing the former Almshouse burial ground and the people who are buried there. The plan has the backing of the city’s Historical Commission, and will soon go before the Cemetery Commission for approval.

Today, Settlers Way is home to the Collins Cove Condominium Complex — several dozen townhouse-style condos across from the Bentley School that were built between 1985 and 1987.

The condo property has a walking path with a sign stating it must remain open to public access. There is little to explain why, but the path runs along the back of the condo units and leads directly to the burial site — if the person knew it were there. Deed records only vaguely refer to an on-site cemetery that must remain undisturbed and be maintained by the condo owners.

But 150 years earlier, the Almshouse stood there. It was built in 1816 from plans by well-known Boston architect Charles Bulfinch, who also built the Statehouse and the Capitol building in Washington, D.C. It was later paired with Salem’s Hospital for Contagious Diseases, which was built nearby and opened in 1884. Still, the Almshouse remained the place of treatment for those who didn’t have the means to pay.

“Almshouses also often get paired with hospitals, because they were treating those that were diseased, those that were impoverished and those traveling as strangers. They (the dead) are often listed as ‘strangers,’” Ratliff said. “There’s no record to search later on, to figure out what happened to that person.”

Its name and associated nicknames changed over the years, including phrases like the “Charity House” and more commonly the “City Home,” prior to its shutdown.

In fact, its closure was the culmination of a heated political fight, mostly due to the building’s deteriorating condition, news reports show.

“Inmates of the crumbling municipal almshouse on Memorial Drive will be evacuated without delay to facilitate the shutdown of the 150-year-old structure by Dec. 31,” reported The Salem News on Nov. 28, 1953. “Action came last night after six months of deliberation when the City Council voted to liquidate the five-story brick building, which would cost more than $1,000,000 to duplicate today, and which for years has been condemned as a firetrap and a drain on the city treasury.”

The building was finally razed in 1985.

After more than a year of poring over records, Ratliff has produced a partial list of deaths marked as “Hospital Burying Ground, Salem” up to 1849. It includes 32 names, many related to each other. Causes of death include consumption, throat distemper, yellow fever, lung fever and one case of drowning.

An immigrant may have sailed into Salem Harbor by ship, or perhaps a traveler from elsewhere in the country arrived by train, both having contracted a serious illness. But upon arriving in Salem, they had no money or documentation of their identity. They likely would have ended up at the Almshouse, and there they often died. Lacking a place to quickly send a body, the bodies were instead often buried on-site, according to Ratliff.

“When the Almshouse was in operation, so little was known of the people that lived there,” she said. “The focus was on the numbers of diseases that had to be treated. There was no personal factor of who these people were, where they came from, what their occupations were previously.”

Many of the patients were Salem residents who couldn’t afford proper care, or people who lived in surrounding communities and somehow found themselves in Salem, according to Ratliff. In some cases, burials were followed up by notices to surrounding towns, seeking reimbursement for the expense.

“They didn’t have the funds to bury them in a proper cemetery,” Ratliff said, “so they would reach out to the cities they thought the people were from, requesting payment for the burial that they took on.”

The project, Ratliff said, “found me.” And this Almshouse wasn’t the only one in town.

“There was one on Salem Common at one point. There was one next to the Broad Street Cemetery, where Salem Normal School was built,” Ratliff said. “And before the Almshouse on Collins Cove, there was one on Hospital Point that primarily served smallpox victims, and while researching that, it also referenced another small gravesite in that area.”

“It’s in the area between the yacht club and the pier, somewhere in that area,” Ratliff said. “Part of the lore is the willows were put there for shade for those inmates.”

The Historical Commission, on Nov. 6, voted to install a sign that reads, in part, “the former Almshouse burial ground on Collins Cove,” along with a bronze marker at the Pickering Tomb in the Broad Street Cemetery and a temporary marker at the gravesite of Boston Tea Party participant John Prince on Broad Street.

Tim Jenkins, president of Historic Salem, likened the Almshouse project to the Lost at Sea memorial in Gloucester that, over the years, has continually been updated with the names of additional fishermen lost at sea throughout the city’s history.

“It’s a remarkable thing, a precursor of the Vietnam memorial,” he said. “Now I don’t believe we can track down their individual names (at the Almshouse), but we can honor them so they’re not just forgotten entirely from history. They are our people, descendants, many of whom were only here for a short period.

“This isn’t anywhere near as controversial or even maybe important (as the Witch Trials), in terms of how people view history,” Jenkins said. “But it’s actually really important in terms of trying to remember people who were a part of the community and marginalized. Jennifer deserves huge kudos for just taking this on and basically not letting go.”