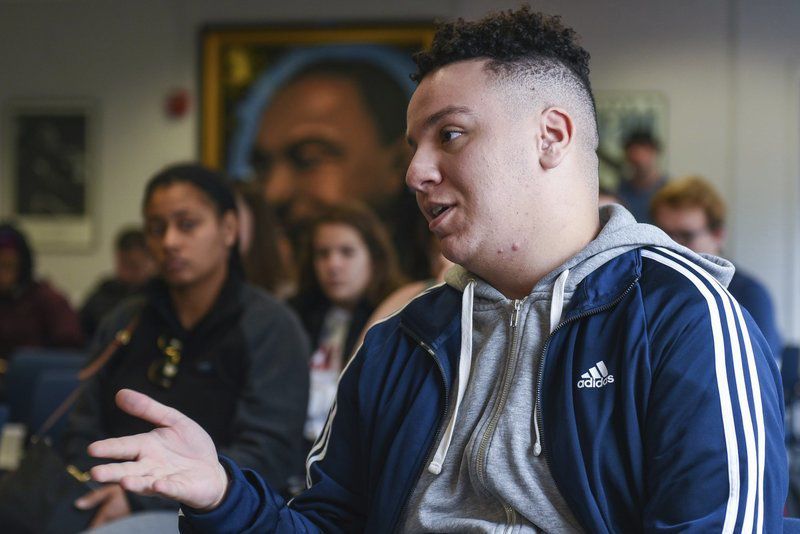 JAIME CAMPOS/Staff photoSalem State freshman Moustapha Bensalah asks for advice on how to help educate others struggling to understand the rights of transgender individuals and members of the LGBTQ community. 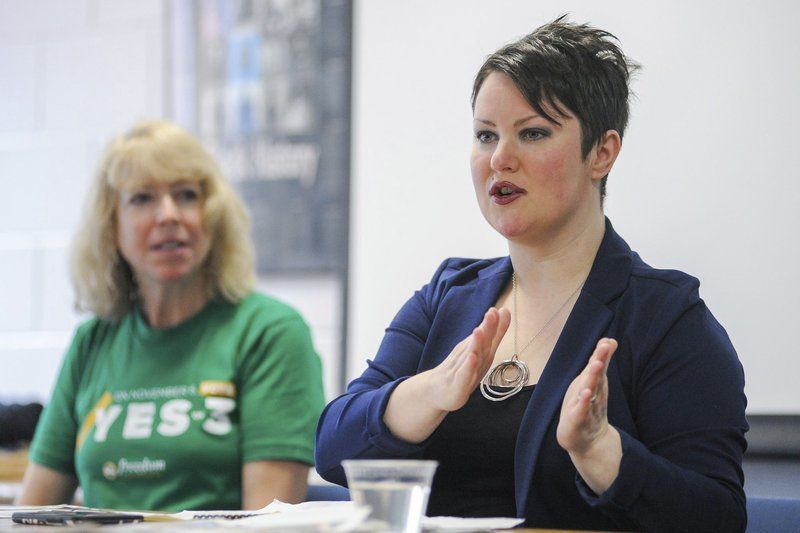 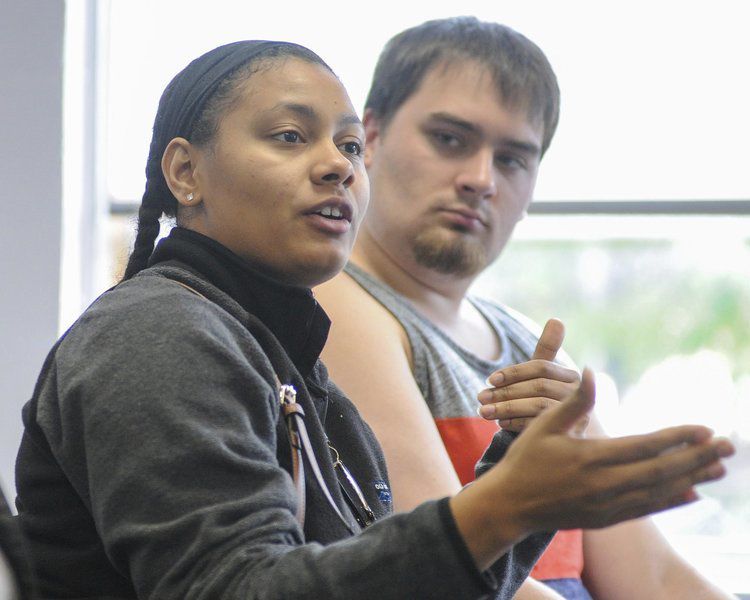 JAIME CAMPOS/Staff photoSalem State University senior Anita Machiavello describes her experiences traveling abroad, when she had to use restrooms with no problems despite them not having gender designations, during the panel. 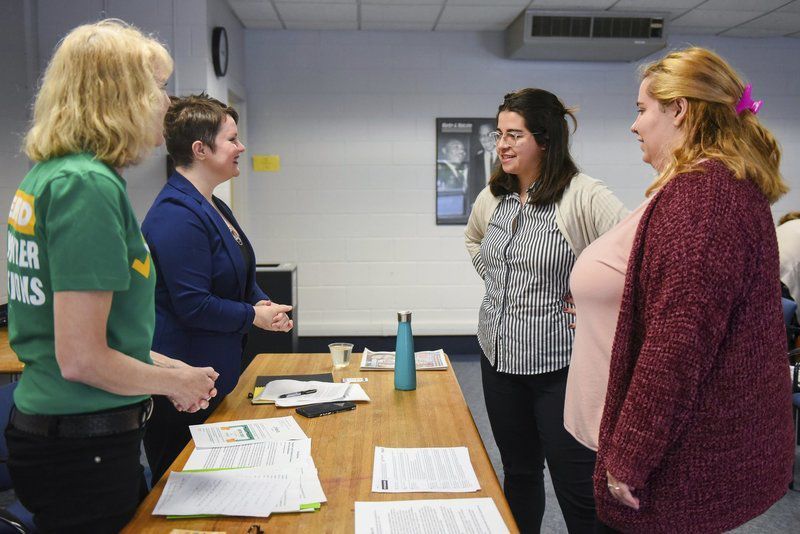 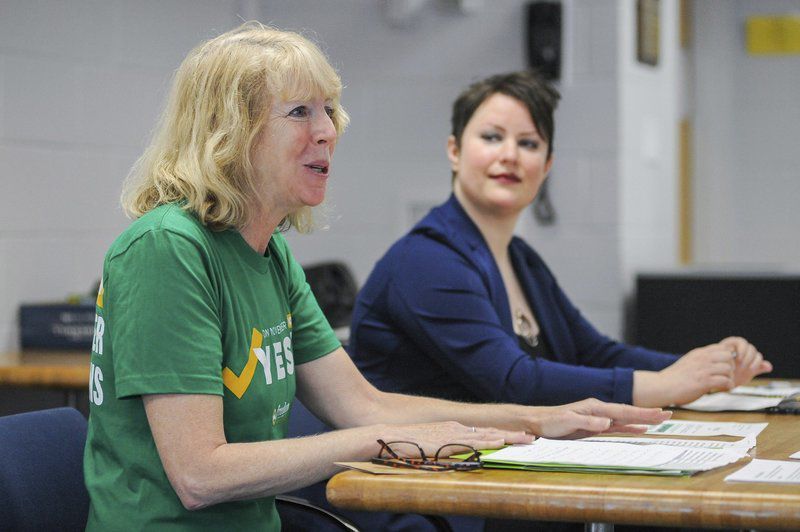 JAIME CAMPOS/Staff photoSalem State freshman Moustapha Bensalah asks for advice on how to help educate others struggling to understand the rights of transgender individuals and members of the LGBTQ community.

JAIME CAMPOS/Staff photoSalem State University senior Anita Machiavello describes her experiences traveling abroad, when she had to use restrooms with no problems despite them not having gender designations, during the panel.

SALEM — Around 40 Salem State University students and professors gathered Wednesday for a panel discussion about Question 3.

The panel was the latest in a series of events at the university for its "Your Voice, Your Vote: Election 2018" initiative.

Question 3 is a referendum vote asking voters to reconsider a law passed in 2016 that bans discrimination of transgender individuals in places of public accommodation, including restaurants, stores and restrooms. A "yes" vote will leave the law in place. A "no" vote will repeal the law.

The No on 3 campaign's website, www.keepmasafe.org, states that the law endangers bathroom privacy and poses a threat to women and children.

"On July 8, 2016, Governor Baker signed into law a bill that eliminates the right to privacy and safety in public restrooms, locker-rooms, showers and changing facilities," the website states. "We think that’s bad for Massachusetts, particularly for the millions of women and children who are likely to be most affected by it. That is why, as concerned citizens, we are exercising our constitutional right to seek a repeal of this dangerous bathroom, locker-room and shower law."

The website also states that the law could be manipulated by predators.

"This law endangers the privacy and safety of women and children in public bathrooms, locker rooms, showers, dressing rooms, and other intimate places, because anyone—regardless of intentions or anatomy—can be there at any given time," the website states. "The law does not have a process to distinguish between people that this bill was intended to help and criminals who will abuse it to prey on others."

At the panel, Alice Merkl, a volunteer for the Yes on 3 campaign, and Nicole Lashomb, editor-in-chief of The Rainbow Times, spoke and answered questions.

Merkl said Question 3 is the first time transgender protections have gone on a statewide ballot.

"If we roll back those protections, it will set a dangerous precedent," she said. "The other reason it is imperative we make a really strong statement in November is the current, hostile agenda coming out of the Trump administration."

"Opponents to this law use fear, they use fear and misinformation," she added. "It is effective, that's what is so frightening."

Merkl encouraged students not only to vote yes on Question 3, but to discuss the topic with friends and family. She also stressed that the law doesn't lessen laws in place that prevent illegal behavior.

Lashomb said that those who oppose the law often express concern about the threat of cisgender men — men who are not transgender — entering women's bathrooms and locker rooms. She said this concern overlooks the distinction between a transgender woman, who is protected by the law to use the facility that matches her gender identity, versus a cisgender man.

"Part of this is also really about common sense," she added. "I think it is important to remember that a transgender person is already in a really vulnerable place in society, so you mean to tell me someone who is authentically trans is going to walk into a bathroom and look at someone else's parts when they are just trying to get in and do their business and get out?"

Both Merkl and Lashomb stressed the importance of voting and discussing Question 3 with others.

"We know people are becoming more emboldened to act in anti-equality ways," Lashomb said. "We are seeing it locally. The country right now is watching Massachusetts because this is literally the first time transgender rights are being voted on by the public. What we do here is setting the precedent for the rest of the country. We can't let not only our residents, the transgender community, the commonwealth down, but we can't let the country down."

"I think especially considering what we are seeing with the Trump administration, ranging from Betsy DeVos dialing back protections for transgender students to what leaked out of the president's office earlier this week...it's really important to have laws in place to protect trans folk," she said.

Moore said hospitals are a particularly crucial space where transgender rights need to be preserved, because transgender people sometimes have less access to health care and feel less trusting of their health care providers.

"If we say hospitals are places where trans folks can be discriminated against, they already have these concerns, and now we have a law in place," she said.

Several students at the panel asked Merkl and Lashomb about how to talk to friends, family, and coworkers about the controversial topic and successfully get their point across. Kimberly Barboza, 22, president of the university's Florence Luscomb Women’s Center, said she is concerned about voters who may not fully understand Question 3.

"I am a little worried about voter apathy," she said. "People who have the best of intentions, but don't understand the importance of this. You can't remind people enough — this is an important referendum."

Caitlyn Connor, 20, president of the university's Gender and Sexuality Alliance, said from her personal experience most students she meets support the law, however.

"From my personal experience with people, my friends, it's an easy yes," Connor said.