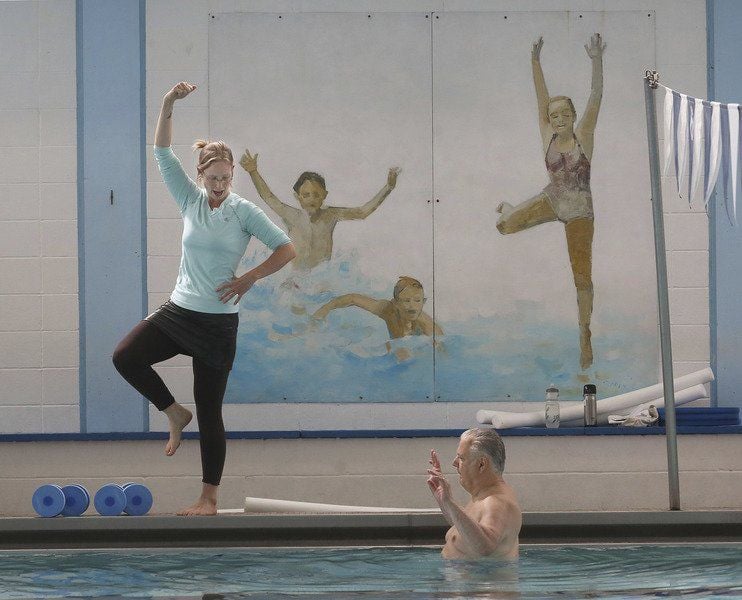 Aquatic therapist Naomi Graham of Gloucester instructs Roger Keith of Rockport on how to move in an exercise during a joint mobility and core stability class at the Cape Ann YMCA swimming pool in Gloucester. 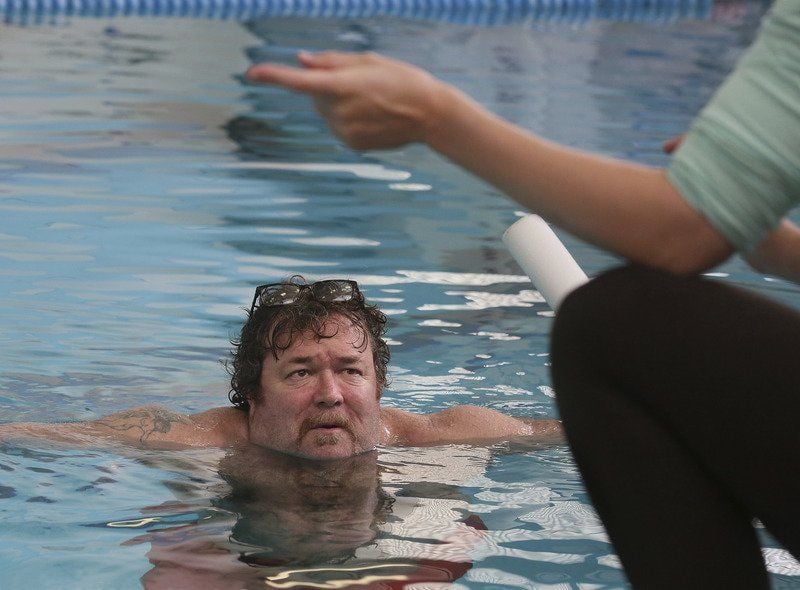 MIKE SPRINGER/Staff photoMatthew Freda of Gloucester listens to aquatic therapist Naomi Graham during a joint mobility and core stability class at the Cape Ann YMCA swimming pool in Gloucester. Freda suffers from debilitating back pain. "I haven't walked more than two or three minutes in a dozen years," Freda said. "The pool is the only place I can exercise." 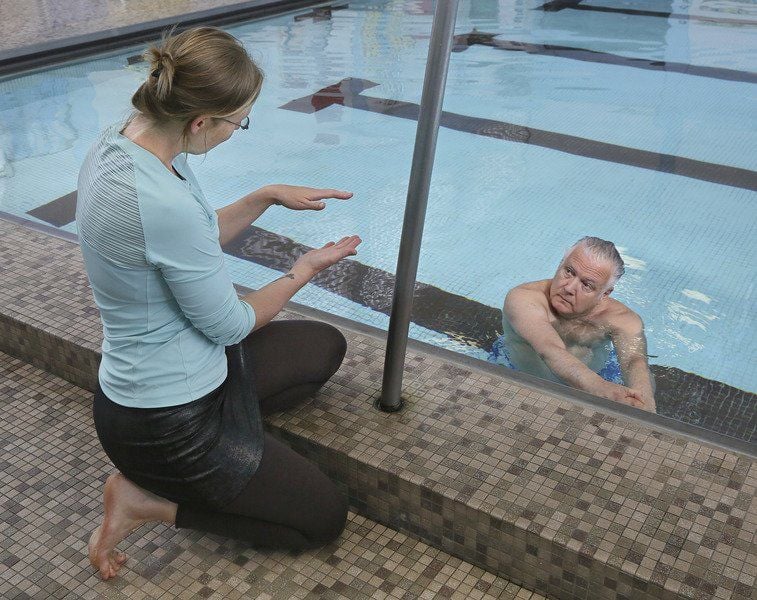 Aquatic therapist Naomi Graham of Gloucester instructs Roger Keith of Rockport on how to move in an exercise during a joint mobility and core stability class at the Cape Ann YMCA swimming pool in Gloucester.

MIKE SPRINGER/Staff photoMatthew Freda of Gloucester listens to aquatic therapist Naomi Graham during a joint mobility and core stability class at the Cape Ann YMCA swimming pool in Gloucester. Freda suffers from debilitating back pain. "I haven't walked more than two or three minutes in a dozen years," Freda said. "The pool is the only place I can exercise."

It’s 10:30 on a sunny weekday morning, but at the Cape Ann YMCA swimming pool there isn’t a water baby in sight.

There are, however, several grown men and women of various ages bobbing about on white flotation “noodles” while their instructor, Naomi (Nome) Graham, gently nurtures them through exercises designed, she later explains, “to get core muscles engaging together.”

Graham, a certified Thai Yoga Massage Practitioner who also teaches dance, has introduced two new weekly classes in joint mobility and core stability to the Middle Street YMCA’s swimming schedule. Gloucester's first aqua rehab program, it's in its first month — a trial run that’s so far grown on word of mouth — drawing adults of all ages and levels of agility, fitness, and — more to the point — lack of fitness.

Graham's morning classes offer people who are compromised by joint and back issues —arthritis, injuries, post-surgical, as well as multiple sclerosis and high blood pressure  — the kind of non-percussive exercise they can only get in water, along with the individual attention needed to regain strength and mobility at their own speed. Graham leaves one "student," just two months out from surgery, free to continue floating and gently kicking in the deep end of the pool, while she moves his more physically able classmates to the shallow end of the pool for a more rigorous workout.

Water's sensation of weightless buoyancy is not just relaxing but supportive, providing resistance in exact ratio to exertion. No one is pushed beyond their ability or what they are ready for; everyone works at their own pace and level. Like most pools that are used for physical therapy, Cape Ann Y’s is heated. "It's 80 degrees," says Graham, who’s worked in water heated up to a heady 90 degrees, and loved it. “Water is just so rejuvenating, she says,  “and I think there’s a real psychological benefit there, too; an emotional lift that can raise a person’s energy level and motivation" — crucial to achieving spinal stabilization and pain relief.

Lower back pain is the second most common neurological condition in the U.S., and people suffering from it are probably the largest population benefiting from aqua therapy. But post operative patients are increasingly finding it therapeutic. For arthritis sufferers, the hydrostatic pressure of water limits the inflammatory process of arthritis, while offering gentle dynamic resistance that builds strength.

While the Middle Street Y has an impressive array of gleaming gym equipment, those machines are, says Graham, not what the doctor ordered for people with compromised spines and joints. For those, the side of the pool becomes, in effect, a ballet barre. Wobble boards, floaties, flippers and kick boards help those in the pool jog, squat, kick, hop, lunge, and do everything else that everyone else can do up in the gym.

“We want everything we do in the water to translate on land,” says Graham, whose background as a physical therapy assistant (PTA) gives her an understanding of a broad spectrum of medical procedures and conditions for which water can be beneficial.

She is also a practiced veteran of the Sarasota-based Aquatic Therapy and Rehab Institute (ATRI) — a nonprofit educational organization dedicated to the professional development of health care professionals involved in aquatic therapy. ATRI has pioneered in teaching methods that maximize the benefits of water’s gravity-reduced buoyancy. “I like to ask my students: how’d you like to lose half your body weight? 'Cos that’s what happens in water’s gravity reduced environment.”

And that's why, for bodies compromised by arthritis, joint issues or surgery, exercises that would be impossible out of water are possible in water.

More information on Naomi Graham's aqua rehab classes and a complete listing of the Cape Ann Y's swimming programs at the Middle Street pool are available at http://bit.ly/2q8amPN.

Staff writer Joann MacKenzie may be contacted at 978-675-2707, or jomackenzie@gloucestertimes.com.