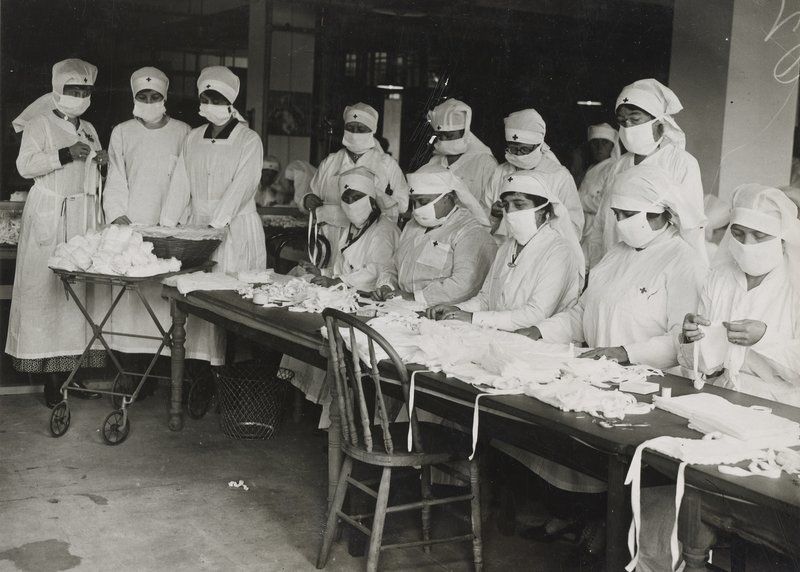 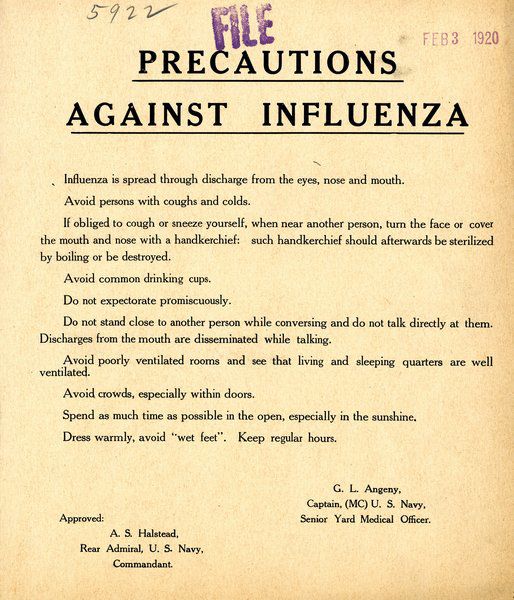 NATIOLA ARCHIVE/This 1918 flyer warned U.S. naval employees to take precautions against the contraction and spread of influenza. The precautions are not that different from those offered by health officials today.

NATIOLA ARCHIVE/This 1918 flyer warned U.S. naval employees to take precautions against the contraction and spread of influenza. The precautions are not that different from those offered by health officials today.

There was nothing subtle about the Spanish flu pandemic that hit Cape Ann in the Indian summer of September 1918.

A fish cutter down on the waterfront or a letter carrier working at the post office would have felt fine and appeared healthy in the morning. And then be desperately ill or dead before supper was served.

“The disease is characterized by sudden onset,” a physician only referred to as Dr. Blue told The Associated Press in a Gloucester Daily Times story dated Sept. 14, 1918, that reported the first deaths in the state.

The deadly virus, later bestowed the title H1N1, recognized no social, geographical or generational boundary, killing without prejudice in Cape Ann and throughout the world.

Deaths were highest in three age groups: children younger than 5 years old; 20- to 40-year-olds; and those 65 and older.

“The high mortality in healthy people, including those in the 20- to 40-year age group, was a unique feature of the pandemic,” according to the Centers for Disease Control and Prevention. “While the 1918 H1N1 virus has been synthesized and evaluated, the properties that made it so devastating are not well understood.”

Victims in Gloucester and the surrounding towns were stricken walking down the street. Workers in factories, shipyards and offices fell out as the virus spread like a jailbreak.

The symptoms followed their own ascension of despair.

“First there is a chill,” Dr. Blue said. “Then fever with temperatures from 101 to 103 (degrees), headache, back ache, reddening and running of the eyes, pains and aches all over the body.”

The crisis was escalating and the medical forces being marshaled to combat it faced a critical shortage of nurses — World War I still raged  — and the new generation of physicians, inexperienced in the ways of the pandemic, was at a sharp disadvantage.

There was no vaccine and no antibiotics to treat secondary respiratory infections.

There was no real public health infrastructure or international network of aligned public health agencies. No social media. No internet. Information traveled at a snail’s pace. Everyone, it seemed, was on their own.

“Control efforts worldwide were limited to nonpharmaceutical interventions, such as isolation, quarantine, good personal hygiene, use of disinfectants and limitations of public gatherings. which were applied unevenly,” the CDC stated in its history of the Spanish flu pandemic.

In the early rounds on Cape Ann, East Gloucester was particularly hard-hit. As was the main post office and the postal annex — both of which were fumigated — and the ranks of mail carriers.

One of the deaths reported on Sept. 16 was mail carrier Sherman R. Walen, whose family ultimately would lose five members. Another mail carrier, Samuel E. Curtis, died soon after.

The other two new city deaths reported in those editions were Lillian Martin and 23-year-old William J. O’Brien Jr., whose father was a well-known Western Union telegraph operator in the city.

At that point, the city’s Board of Health took no action and the school administration left the schools open. Within days, schools were closed and students ordered to stay at home.

On Sept. 17, the Board of Health closed “theaters and premises used for public dance, amusement, lectures and entertainment.” The action was deemed necessary “in view of the epidemic of grippe in this city.”

The next day, the Times reported no deaths in Gloucester from the Spanish flu in the past 24 hours. It ran a front page headline — “No More Deaths From Influenza ... Believe that the epidemic will soon be checked.”

A tad premature, that.

On Sept. 19,  the Times, still holding to the sunny side of the street, reported two more Spanish flu deaths with the caveat: “although it is generally believed that the situation locally is well in hand.”

A day later, four more Spanish flu deaths were reported and city and the Red Cross opened a number of emergency treatment centers, including one at the G.A.R. Hall, and scrambled to find nurses and physicians to staff them.

“A marked decrease is looked for in the number of new cases now, and with clear weather and warm sunshine, the situation should improve,” the paper stated.

But the deaths not only continued, they exploded.

Part I: In 1918, most flu patients treated in tents outside Addison Gilbert Hospital.

It is hard to fathom, as we inch through the spectral light of COVID-19, that we have been here before. It was more than a century ago. But we…