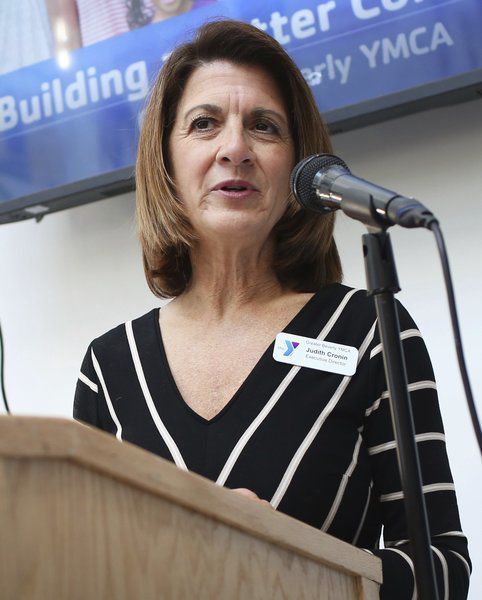 HADLEY GREEN/Staff photoJudith Cronin, executive director of the Greater Beverly YMCA, speaks at the ribbon-cutting ceremony for the new expansion at the Sterling YMCA in Beverly. 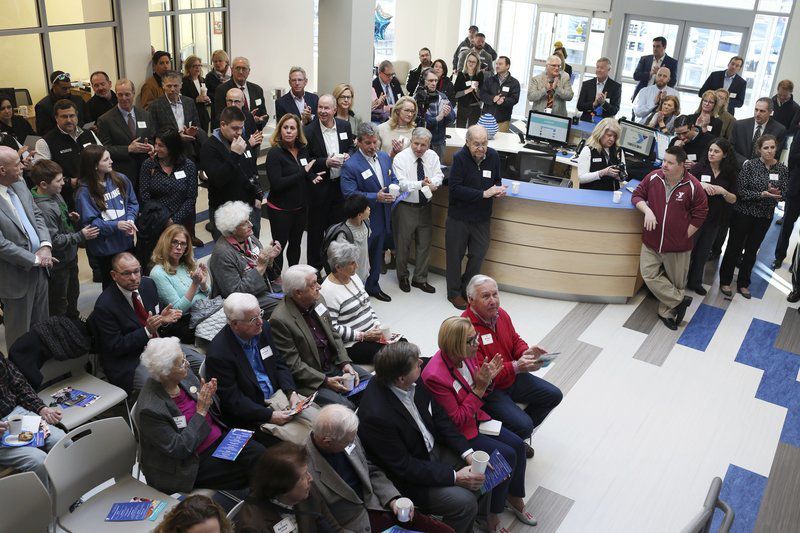 HADLEY GREEN/Staff photoA roomful of guests attend the ribbon-cutting ceremony for the new expansion at the Sterling YMCA in Beverly on Tuesday.

HADLEY GREEN/Staff photoJudith Cronin, executive director of the Greater Beverly YMCA, speaks at the ribbon-cutting ceremony for the new expansion at the Sterling YMCA in Beverly.

HADLEY GREEN/Staff photoA roomful of guests attend the ribbon-cutting ceremony for the new expansion at the Sterling YMCA in Beverly on Tuesday.

BEVERLY — Almost a year to the day that the Greater Beverly YMCA revealed its expansion plans for the Sterling Center campus, the organization invited the community in to celebrate the new space.

Crowded into the bright new entrance area, Executive Director Judith Cronin, the board of directors and others involved with the project described the six years of work — including planning, fundraising and finally, construction — that led to the $7.5 million project.

The Y has renovated the existing Sterling Center building and put an addition on the front, now called the Ralph E. Bates Healthy Living Center, named after the Manchester philanthropist who donated $1 million to the cause, the largest donation the Y received.

Up on a small hill, the Y also has a new, nearly 13,000-square-foot education center.

“These buildings will serve as living laboratories of innovation and growth that will advance the Y’s work in academic readiness, character development, fitness and healthy living,” Cronin told the crowd.

“Our Y,” she added, “is a place where everyone belongs — where young people achieve their potential, where people of all ages are empowered to lead healthier lives and where the bonds of community are strengthened.”

The changes to the Y are apparent from the minute you walk into the new entryway, a bright, two-story space with a skylight to provide natural, soft lighting. The entrance is now separate from the cafe, which has its own area from the foot traffic at the entry. The pool is off to the side, as well; windows used to overlook the pool area from the old entrance.

A staircase directly behind the new service desk leads up to the new fitness areas. Treadmills and other cardio equipment are more widely spaced and line up against large windows.

There are also family locker rooms, along with additional space for fitness classes and a larger area for child care.

The new education center includes nine classrooms for infants and toddlers and four classrooms for school-aged kids, plus a second-floor academic achievement center.

The Beverly Y has a membership numbering more than 11,000, and that number is growing, Cronin said. The largest areas of growth have been in memberships for young adults and for complete families — two parents and their children, versus one parent joining with kids.

About 25 percent of people who use the Y receive some form of financial aid, and 665 kids in low-income homes sign up for the Y’s summer camps, after-school programs and early learning, according to the Y.

YMCA officials began planning for the project in 2012, and when officials announced the plans last year, they said it was all about meeting community needs. Dane Poeske, who headed the capital campaign steering committee, said at the time that the Sterling Center was “just flat out of space,” but owned enough land to make the expansion possible.

The original Sterling Center was named for Lester O. Sterling, a Beverly businessman who donated the 35 acres where the campus stands today. Sterling had created Sterling Insurance Agency Inc. back in 1929, and was “actively involved in the YMCA,” according to Rick Alpern, past board chairman.

The Y built an addition and aquatic center in 1976, then a gym and fitness center in the mid-1980s. Sterling was in his 80s when the Y was dedicated with his name in 1985, Alpern said.