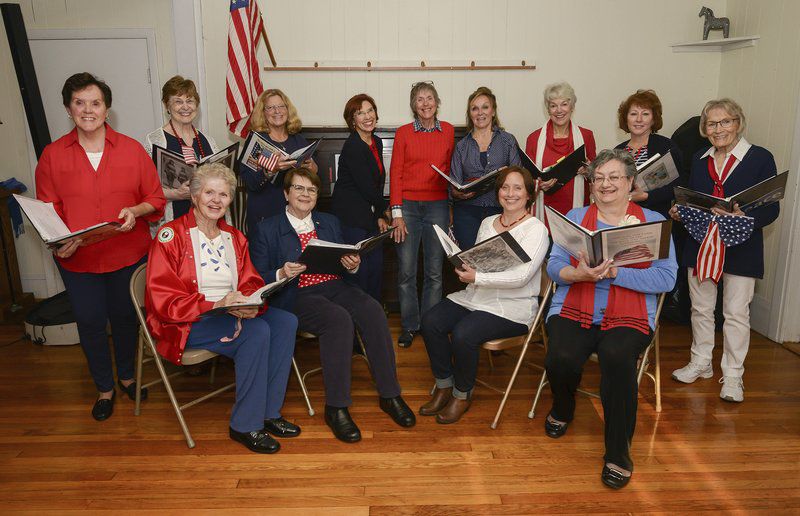 Jeph Ellis/Courtesy photoShare the Music and Friends, a Cape Ann chorus, are presenting “A Musical Salute to Our Veterans” on Sunday, Nov. 10, at 2 p.m. at Lester S. Wass American Legion Post 3, 8 Washington St. in Gloucester, and Veterans Day, Monday, Nov. 11, at 2 p.m. in St. Paul Lutheran Church, 1123 Washington St. in Gloucester. The concerts are free. 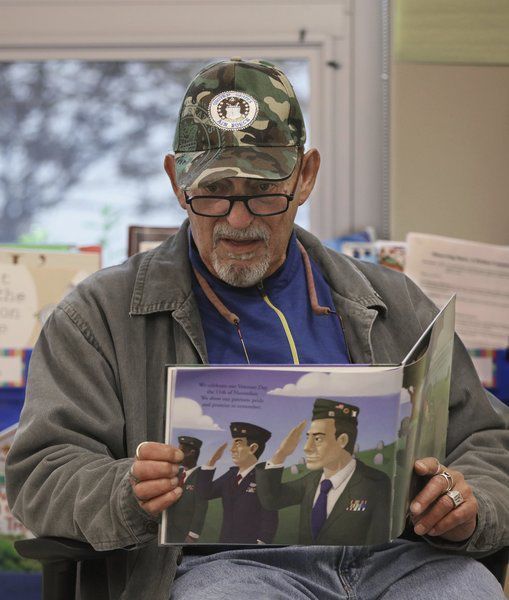 MIKE SPRINGER/Staff photoAir Force veteran Joe Muse reads a patriotic story Thursday to students in Jodi Parisi’s first-grade class at West Parish Elementary School in Gloucester. Muse is one of a group of veterans visiting Gloucester elementary schools this week to raise awareness of those who have served in the military in preparation for Veterans Day on Monday. 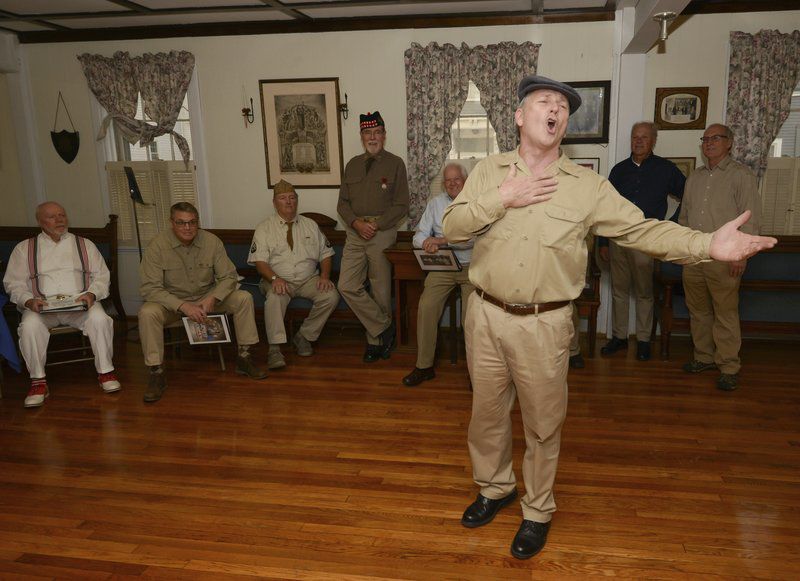 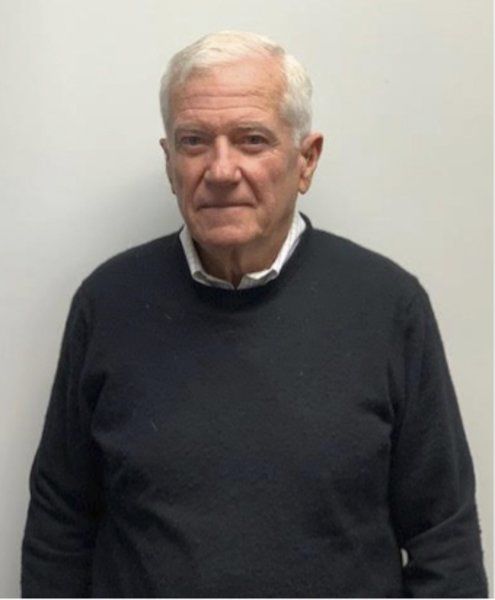 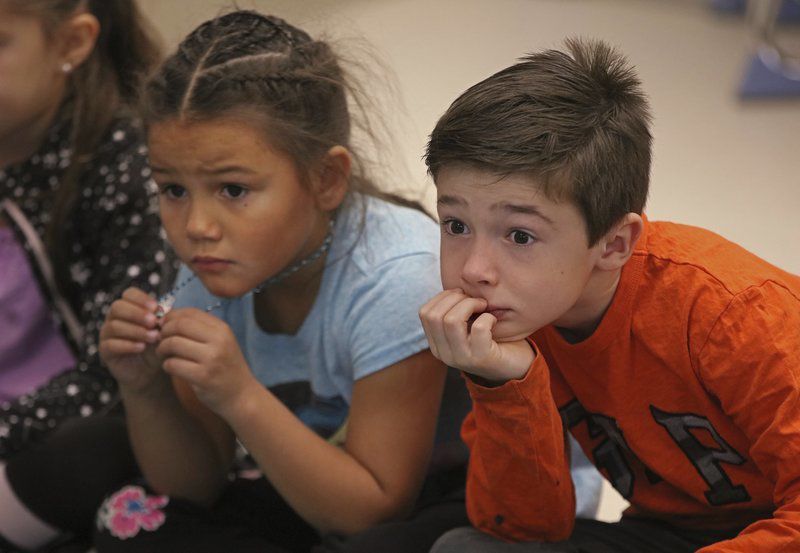 Jeph Ellis/Courtesy photoShare the Music and Friends, a Cape Ann chorus, are presenting “A Musical Salute to Our Veterans” on Sunday, Nov. 10, at 2 p.m. at Lester S. Wass American Legion Post 3, 8 Washington St. in Gloucester, and Veterans Day, Monday, Nov. 11, at 2 p.m. in St. Paul Lutheran Church, 1123 Washington St. in Gloucester. The concerts are free.

MIKE SPRINGER/Staff photoAir Force veteran Joe Muse reads a patriotic story Thursday to students in Jodi Parisi’s first-grade class at West Parish Elementary School in Gloucester. Muse is one of a group of veterans visiting Gloucester elementary schools this week to raise awareness of those who have served in the military in preparation for Veterans Day on Monday.

Veterans Day, the national holiday honoring military service men and women, is being marked with patriotic concerts and ceremonies on Cape Ann — just as in cities and towns across the country.

Veterans Day this year falls on a Monday. Public schools, city, town, state and federal offices; public libraries, post offices, and most most banks will be closed. Restaurants, convenience stores, liquor stores, retail stores will be open. Trash pickup will be delayed one day. The MBTA is operating on a regular weekday schedule.

Below is a list of how Cape Ann communities are showing their appreciation for those who served in the armed forces.

Share the Music and Friends, a chorus of 23 singers from Cape Ann, are again presenting a program of patriotic songs for the public in two shows.

The program is especially meant to pay respect for veterans of all wars, Revolutionary through World War I and II, Vietnam, and present day conflicts, said director Wendy Betts.

“All of us singers immediately said ‘yes’ to singing for our veterans. This is the program we have enjoyed the most over all the years of Share the Music, the sharing of compatriotism through song,” Betts said. “We added ‘and Friends’ because we have included some singers brand new to our group. I thought we were done two years ago, but no way. As long as there is a need for music to hold this country together, we’ll be there. We have singers now in their 90s who started out in their 70s who are not ready yet to give up singing.”

Free will donations will be accepted Sunday for the Legion’s many service efforts on Cape Ann and beyond.

Donations on Veterans Day will benefit Company 2 Heroes, a program specializing in guide-assisted self-training of service dogs working with combat veterans who suffer from post traumatic stress, military sexual trauma and traumatic brain injury. It was founded by its executive director, Kate Van Auken, after she retired from the U.S. Army with more than 28 years of service.

“Please come and join in singing with us all the old familiar tunes that the various wars promoted and that dignify and honor our veterans, both deceased and still with us,” said Betts.

Doors open at 1:30 p.m. Both venues are handicapped accessible.

Gloucester will mark Veterans Day on Monday with a 9 a.m. ceremony in the auditorium at Gloucester High School, 32 Leslie O Johnson Road. A march to the Lester S. Wass American Legion Post 3, 8 Washington St., for a brief wreath-laying ceremony in honor of Armistice Day commemorating the end of World War I and a luncheon will follow. The luncheon, like the other events, is open to the public and is aimed at saluting all of those who have served in our armed forces.

O’Brien’s connection to Gloucester began in ROTC alongside Gloucester residents Frank D’Amico and Paul Dexter at Norwich University from which he graduated in 1964.

“Because of the rigors of the JROTC program at Gloucester High School, these two showed me how to survive the requirements of a military school,” O’Brien said. “They exhibited a strength of character, integrity and sense of purpose that one seeks in their companionship. Authentic and genuine, what you saw is what you got.”

O’Brien would go on to serve 26 years in the U.S. Army Reserve and balanced his military career with 20 years as an administrative officer at Princeton University. O’Brien’s connection to Cape Ann grew with his nephew’s move to Manchester; with his love and passion of the ocean he found a place he truly enjoyed to visit.

O’Brien’s Veterans Day speech is sure to cover the difficulties of serving in the military with a divided nation during the Vietnam War as well as his lessons learned from balancing back and forth from a professional career in the civilian life and a career with the U.S.Army, Cape Ann Veterans Services Director Adam Curcuru said.

American Legion Post No. 98 will commemorate Veterans Day on Monday at its history-filled building at 32 Beach St. The ceremony begins at 10 a.m.

Meanwhile, the Rockport Police Department’s Honor Guard will be taking part in ceremonies at Endicott College in Beverly.

On Friday, veterans will be in Manchester for a reading at Memorial Elementary School in the morning before heading to a Veterans Day ceremony at Manchester Essex Regional Middle and High School.

Later Monday, the Manchester Woman’s Club is hosting a Spaghetti Dinner Fundraiser to benefit the club. The dinner, catered by Classic Cooks, will be served between 5:30 and 7:30 p.m. at the Manchester Community Center, 40 Beach St. The menu is spaghetti and meatballs, Caesar salad, garlic bread, coffee, tea or lemonade, and assorted cookies for dessert. Tickets — $15 for adults; free for children 10 and younger — will be available at the door. Tickets holders will be entered into a drawing for the door prize and need not be present to win. There will also be a 50/50 raffle.

Essex will honors its veterans with a ceremony and a multimedia presentation on Veterans Day at Town Hall, 30 Martin St.

The ceremony starts at 6 p.m., followed by the presentation from 7 to 9 p.m.

Ipswich resident Jim Kurtz, author of the book “The Green Box,” will share photographs and video clips about his father Robert Kurtz, co-pilot of the B24 Liberator nicknamed “Sugar Baby” that crashed in the Alps during a fierce air battle over Austria on Aug. 3,1944.

Kurtz has written about his dad’s service in the 465th Bomb Group and interviewed crew members who trained and flew with him during World War II for his book “The Green Box,” which is at the center of the film in production called “The Green Box: At the Heart of a Purple Heart.”

Never having known his father, Kurtz discovered clues in a forbidden box in the attic that set him on a quest to learn about his dad and his war experiences. His book and the film will tell the story of his father’s air battle, his crash and capture in Austria, his imprisonment in Stalag Luft III, his participation in the infamous grueling winter march across Germany, and his ultimate liberation by Gen. George Patton’s Third Army. Woven into that story is Jim Kurtz’s journey to learn about his father and, historians, doctors, and social scientists explaining the broader significance of the story both in its own time, and in ours.

The public is invited to hear more about the crewmen of Sugar Baby and Kurtz will have copies of his book for sale.

More information about the book and movie may be found at www.greenboxfilm.com.