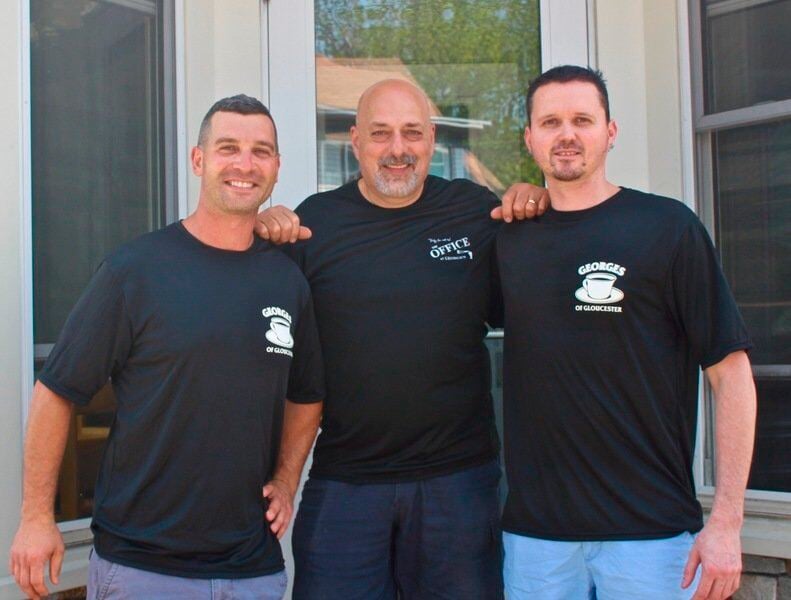 Dean Salah is flanked by new owners Zorba Kinigstein, left, and Jholliklesio Defreitas in front of what will now be known as George's Restaurant and Bar at 178 Washington St. 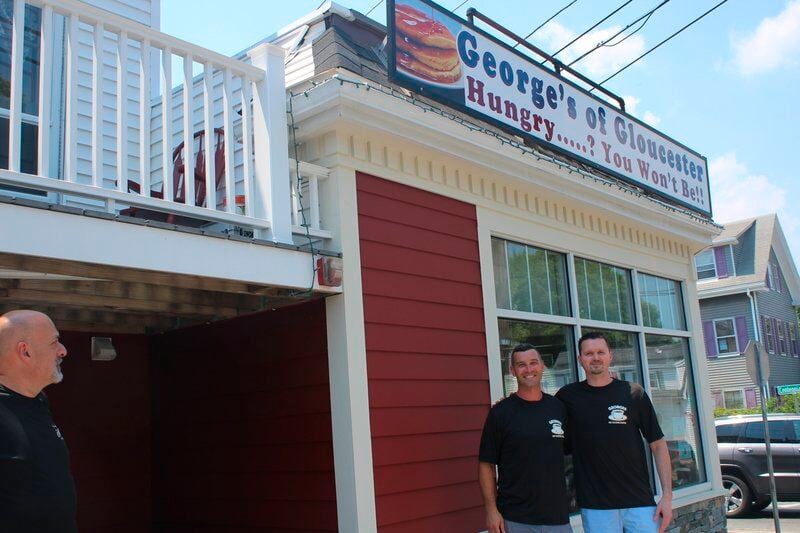 Taylor Ann Bradford/Staff photoNew owners Zorba Kinigstein, left, and Jholliklesio Defreitas stand in front of what will now be known as George's Restaurant and Bar at 178 Washington St.

Dean Salah is flanked by new owners Zorba Kinigstein, left, and Jholliklesio Defreitas in front of what will now be known as George's Restaurant and Bar at 178 Washington St.

Taylor Ann Bradford/Staff photoNew owners Zorba Kinigstein, left, and Jholliklesio Defreitas stand in front of what will now be known as George's Restaurant and Bar at 178 Washington St.

After 21 years of running what he says is Gloucester's oldest standing restaurant, Dean Salah is handing over the keys — and the making of giant portions of classic American cuisine.

Salah announced last week that he will be retiring as the owner of George's of Gloucester, 178 Washington. St., with no immediate plans other than to rest, spend time with his family and take his grandchild to Washington, D.C.

"The last few years have been as challenging as any I faced," he said. "Operating and actually thriving during a pandemic took a lot out of me."

While seated at the bar with the new owners — Jholliklesio Defreitas and Zorba Kinigstein — Salah reflected on the past couple of years.

"You worked like 100 hours a week," Defreitas of Essex said.

"It was five in the morning to ten at night, seven days a week," Salah said.

His hard work hasn’t gone unnoticed as George’s has become a staple in town and garnered hundreds of raving reviews online.

“I was a waitress at George’s for years,” Brianna Aloisio wrote. “Dean, the Salah’s, and the extended family of George’s taught me a lot about work ethic and people — those values I still use today. I even wrote my college essay about my time at George’s and the people I met there.”

Even the mayor of Gloucester spoke up in support of Salah’s endeavors.

“Thank you Dean Salah, for all the years of great food, fun and support you’ve given to the community,” Sefatia Romeo Theken wrote on Salah’s Facebook page.

Over the years, Salah brought a family-feel to the eating-out experience as he served large portions, then opened the adjacent Salah's Scoops ice cream shop. More recently he converted the creamery into a bar which he dubbed “The Office.”

As Salah says farewell to the restaurant business, he is confident that he has left George's in good hands.

“Together Jholly and Zorba are poised to keep George's very much the same while adding new and exciting offerings,” Salah said. “I wish them nothing but the best as they embark on this exciting challenge.”

The two new co-owners of George’s met for the first time at another local staple, Pratty’s CAV on Parker Street.

“(Defreitas) and his friend were shooting pool and I was with my buddy and thinking that I was a hot shot,” Kinigstein laughed. “And then they kicked our butts.”

The two became fast friends through the bar’s pool league and when Defreitas mentioned that he was looking to run the restaurant, Kinigstein came on as his partner in crime.

The two have an expansive history within the local restaurant industry. Defreitas most recently was the head chef at George’s, and has cooked at Captain Carlo's in Gloucester, as well the Blue Marlin, Farnham's, Windward Grille and The Great Marsh. in Essex. As Defreitas brings the flavor, Kinigstein comes with years of management experience as he has worked for Alchemy, Madfish Grille, Latitude 43, the Ritz-Carlton, Maggie’s Farm and Hale Street Tavern.

The two new owners said that other than changing the name to George's Restaurant and Bar and adding some new flavors to the menu, they will keep the legacy of the beloved eatery alive and well.

“Zorba’s strength is up front and Jholly’s is running the kitchen and managing his kitchen staff,” Salah said. “Luckily I am leaving George's to a very capable team and look forward to being one of their loyal customers for years to come. I look forward to dining alongside many of my former customers and taking some time to enjoy some down time with my family."

Staff Writer Taylor Ann Bradford may be contacted at 978-675-2705, tbradford@gloucestertimes.com or on Twitter at TayBradford97.

In Memoriam In Loving Memory o...

Country living at its finest in bucolic Wenham