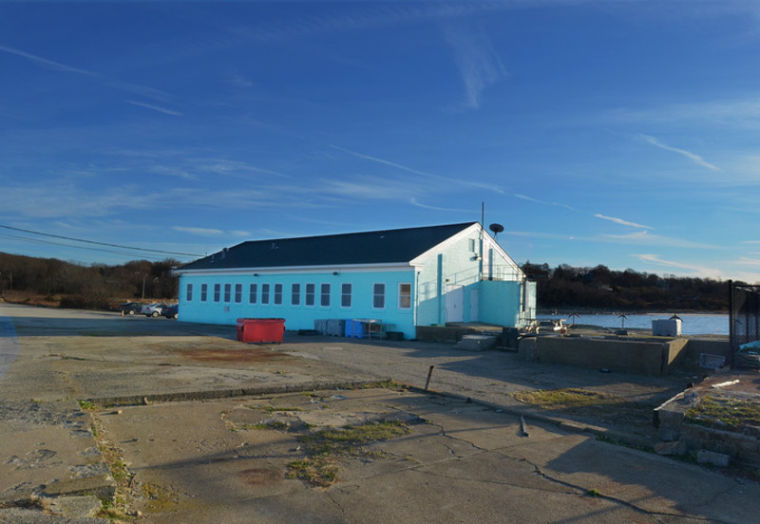 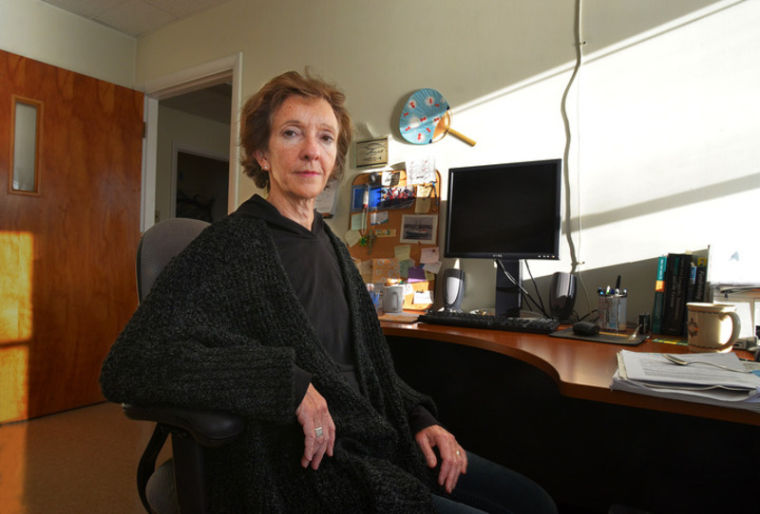 Molly Lutcavage, research professor and director of the UMass Large Pelagics Research Center, says the facility is in a financial pinch. 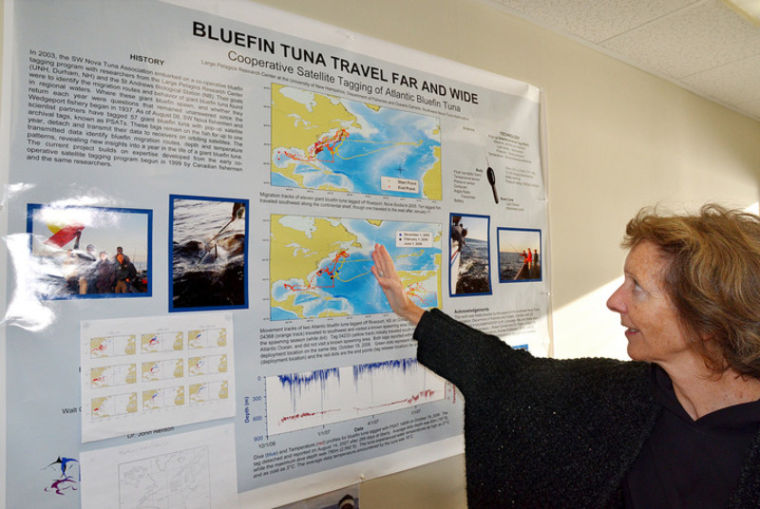 Molly Lutcavage, research professor and director of the UMass Large Pelagics Research Center, points to a migratory map of the Atlantic bluefin tuna, one the primary species studied at the center.

Molly Lutcavage, research professor and director of the UMass Large Pelagics Research Center, says the facility is in a financial pinch.

Molly Lutcavage, research professor and director of the UMass Large Pelagics Research Center, points to a migratory map of the Atlantic bluefin tuna, one the primary species studied at the center.

On a warm, sun-splashed late November afternoon, the view from Hodgkins Cove across Ipswich Bay is startlingly clear, the visibility so expansive and sharp that if you waved in the direction of Plum Island, someone just might wave back.

Inside the University of Massachusetts’ Large Pelagics Research Center, on a spit of land that juts out into the bay, the work quietly continued.

Scientists poured over data and testing equipment in advance of future experiments. It was simple, methodical work. Still, it has enabled the LPRC to carve out an international reputation for cutting-edge science in the study of bluefin tuna and other large, highly migratory pelagic species.

The calm, inside and outside the facility, was deceiving, however.

Storm clouds, at least figuratively, have been gathering, seeded by growing concerns about how much longer the center will be able to do its work in an environment of increased competition among researchers for rapidly diminishing funding.

“We’re in danger of closing,” said Molly Lutcavage, the center’s director and research professor. “We’re in jeopardy of shutting our doors in June 2014 due to lack of funding opportunities.”

It doesn’t get any more stark than that.

As Lutcavage gazes off toward the horizon of 2014, she openly wonders what will come of the center and the phalanx of young doctoral and post-doctoral scientists lured by its highly regarded work, sterling reputation and its setting along the shores of America’s oldest seaport.

“We want to be in Gloucester,” she said. “This where our work is.”

But will they be able to stay as the current funding withers away?

Will they be able to remain within the embrace of UMass — which provides the Gloucester facility and little else financially — or be forced to seek sponsorship elsewhere, such as MIT or the University of New Hampshire, where the center actually began in 2003 and which is said to be interested in a reconciliation?

And even if Lutcavage manages to cobble together the approximately $1.3 million from state, federal, corporate and private sources needed to keep moving forward, can she do it before her half-dozen staff scientists and another half-dozen affiliated scientists scatter to the winds in search of opportunities elsewhere?

In that way, Lutcavage and the LPRC are running a race against the clock and doing so in a field populated with other publicly funded research facilities looking to root out every possible dollar. It is a race made even more complicated by its ever-changing course over a ever-shifting landscape.

Through much of its history, the LPRC has been funded with federal earmarks and line-item appropriations in the annual budget of the National Oceanic and Atmospheric Administration.

Since 2007, it has largely relied on the competitive grants from NOAA and other university-based research programs, as well as assistance from the Massachusetts Division of Marine Fisheries after moving to Gloucester in 2011. It has also have benefited from almost $340,000 in private and corporate donations.

Largely, those funds have funded research by the LPRC and its scientists credited by NOAA and other influential international players such as the International Commission for the Conservation of Atlantic Tunas for shedding enormous new light on the life, migration, maturation and breeding habits of large pelagics — such as bluefin and big-eye tuna, swordfish, leatherback turtles and various species of sharks.

Not only has the center been involved in ocean-breaking research, Lutcavage said, but it’s done so at bargain prices.

“We can very easily make the case that we have produced a very high volume of science and very high level of science,” she said. “We’ve given them a very big bang for their buck.”

The center’s reach has extended beyond its own walls. From 2006 to 2008, the LPRC distributed more than $2.3 million in grants to support cooperative research and programs at other U.S. universities and research centers.

“There’s a lot of talk about the way to do this type of work is through cooperative research,” said Emily Chandler, an LPRC research scientist and program manager. “But what isn’t being said is that there isn’t a lot of money going to labs who have shown a track record of cooperative research.”

Where does the center turn for new funding?

Certainly, in this age of sequestration and dwindling federal funding, Congress seems a dead end.

That potential path is further complicated by the turnover in a Massachusetts congressional delegation that has robbed the state of any seniority, and by extension, political influence.

“We’ve yet to develop those new relationships (with the current delegation) as fully as we would like,” Lutcavage said. “The reality is those relationships take time and we’re approaching a crisis point now.”

The state also appears to be a non-starter for increased funding, despite the best efforts of state Senate Minority Leader Bruce Tarr and state Rep. Ann-Margaret Ferrante, both champions of the center, to push for a higher profile for the Gloucester facility within the UMass constellation.

“The state budget has its own constraints,” UMass-Amherst Dean Steve Goodwin, one of the chief administrators overseeing the LPRC and other research sites, said Wednesday. “Direct intervention from there is not likely.”

“Gloucester is our foothold into that,” Goodwin said, adding that he did not think the shuttering of the Gloucester site is a real possibility. “I’m fairly confident we’ll find a way to move forward. We’ll have to look to funding alternatives, including private sources, foundations and corporate.”

Less than 24 hours after Goodwin’s remarks, UMass President Robert L. Caret was in Gloucester, partly to meet with Tarr and Ferrante on issues of interest between Gloucester and the university.

While Caret also said he doubted the pelagics center would have to close due to lack of funding, he admitted the funding landscape is a barren terrain.

“Largely it requires federal funding,” Caret said. “We’re trying to do more to diversify our funding sources. Beyond that, the research facilities have to sell themselves.