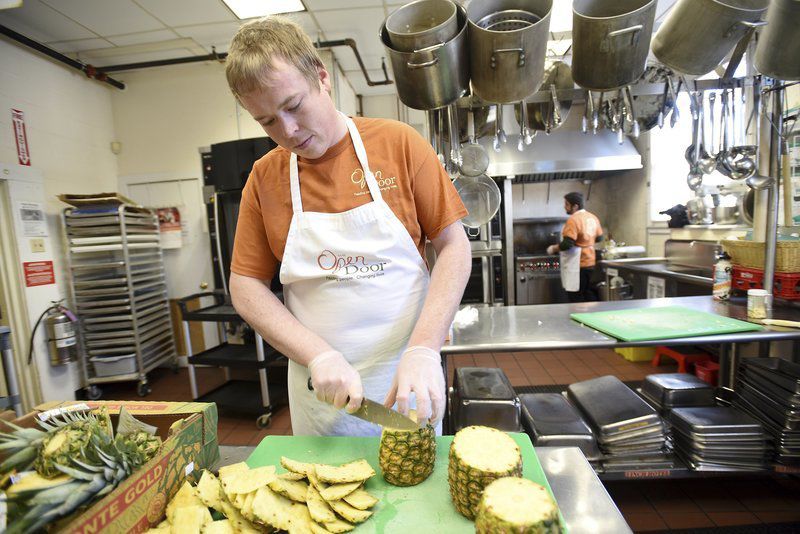 PAUL BILODEAU/Staff photo. Dan McKenna, who is the new hired chef at the Open Door in Gloucester, works on cutting up pineapples for holiday meals for people in need. 12/19/18 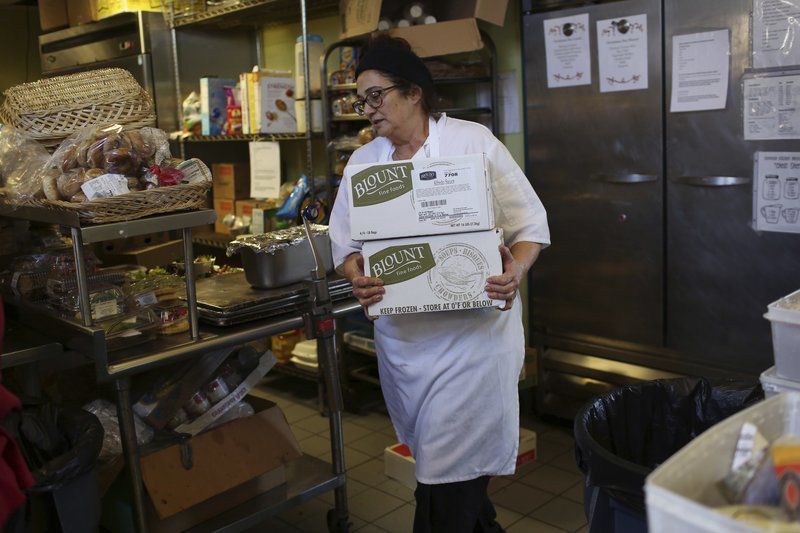 HADLEY GREEN/Staff photo Karen Andrew, kitchen manager at Lifebridge in Salem, carries a box of food into the kitchen's freezer as she prepares for holiday meals. 12/20/2018 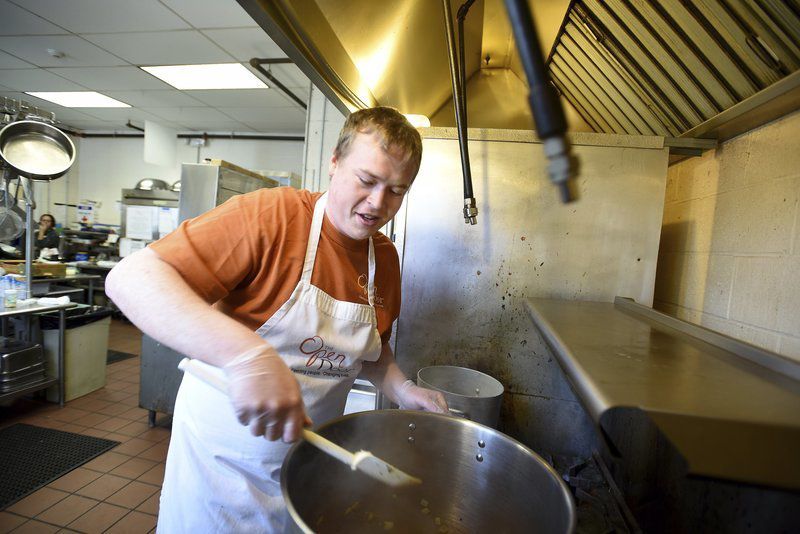 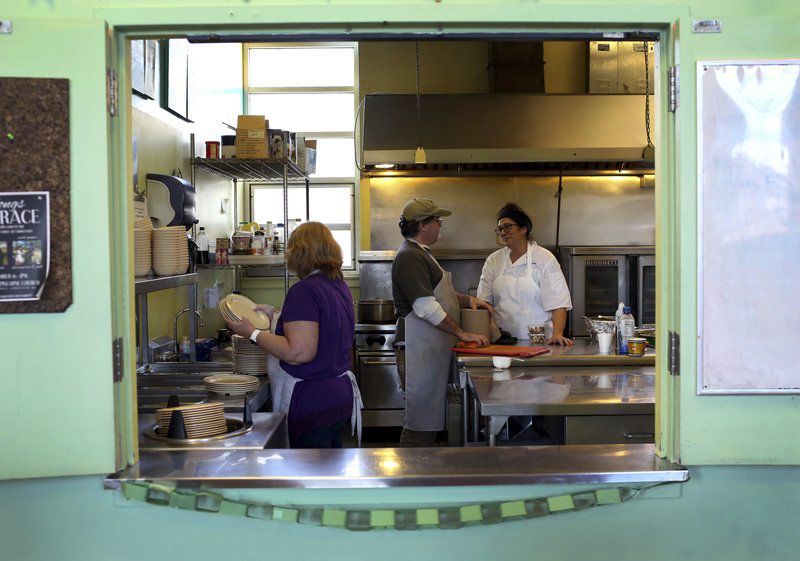 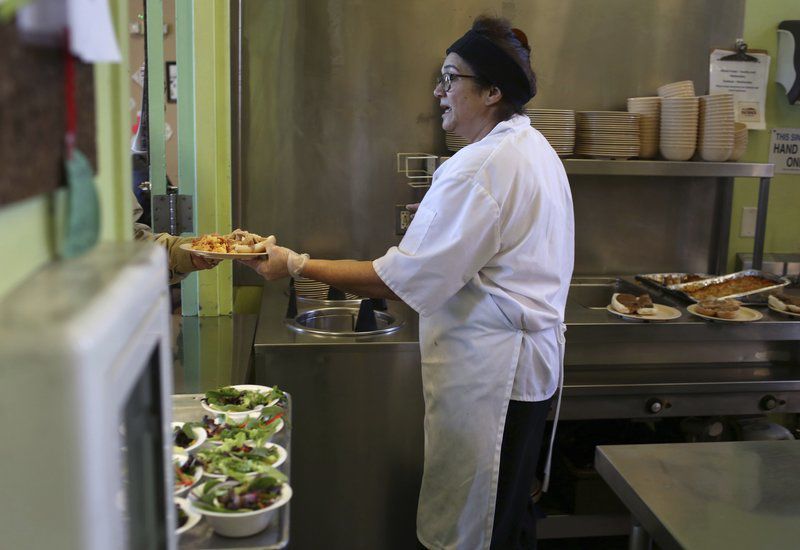 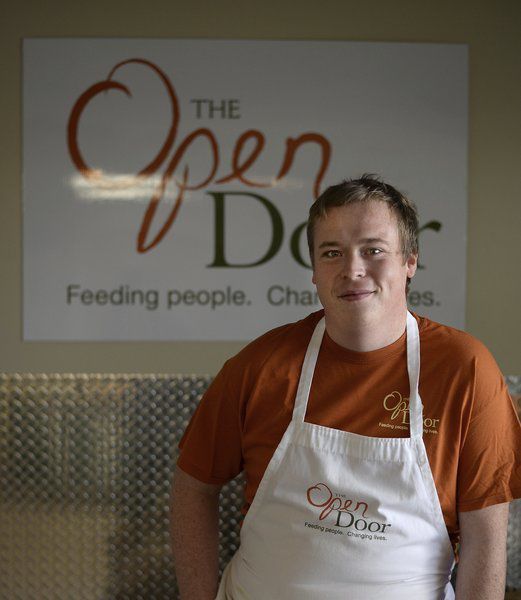 PAUL BILODEAU/Staff photo. Dan McKenna is the new hired chef at the Open Door in Gloucester. 12/19/18 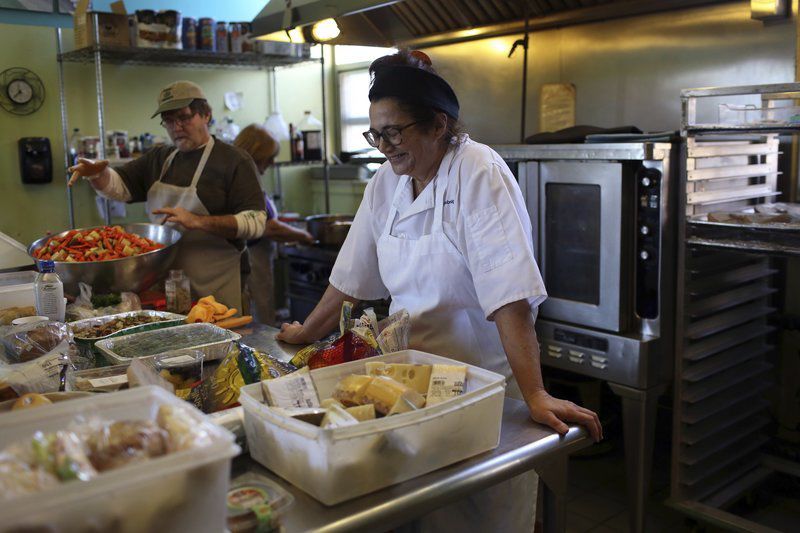 PAUL BILODEAU/Staff photo. Dan McKenna, who is the new hired chef at the Open Door in Gloucester, works on cutting up pineapples for holiday meals for people in need. 12/19/18

HADLEY GREEN/Staff photo Karen Andrew, kitchen manager at Lifebridge in Salem, carries a box of food into the kitchen's freezer as she prepares for holiday meals. 12/20/2018

PAUL BILODEAU/Staff photo. Dan McKenna is the new hired chef at the Open Door in Gloucester. 12/19/18

For Dan McKenna, the attraction of cooking for those in need comes in part because while he was growing up, his family needed assistance.

"My family wasn't ever super rich or well-off," McKenna said. "My mom was on WIC and food stamps, whatever they were at the time."

McKenna is one of a handful of local chefs who will prepare holiday meals for those facing financial hardship or homelessness this year.  He had his first day at The Open Door, a nonprofit that offers community meals as well as a food pantry and mobile market, on Dec. 18. He said the nonprofit's meal plans are scheduled through New Year's Day, but he's looking forward to having more influence in 2019.

The Open Door provides a public supper five nights a week, and on Tuesdays the nonprofit hosts a family supper as well. The organization also runs a senior soup and salad bar three days a week, and soon will offer it four days a week, through the Rose Baker Senior Center.

According to Julie LaFontaine, The Open Door's executive director, two local chefs — Ken Duckworth of Duckworth's Bistro, and Matt Beach of Beach Gourmet Catering Co. — cook a pot roast dinner at The Open Door every Christmas Eve. The Open Door will also give out 800 turkeys with "all the fixings" for people to cook at home for Christmas, LaFontaine said.

McKenna, who grew up on Cape Cod, completed a culinary program at Cape Cod Community College and has worked in the culinary industry for more than 15 years. This summer, he worked as the sous-chef at The Market Restaurant on River Road off Lobster Cove in Gloucester, and plans to return to his seasonal post there this spring. According to LaFontaine, McKenna's role will help the nonprofit increase nutrition through its prepared food offerings and also help utilize the "rescue food" the organization obtains.

McKenna said his father ran a natural grocery store similar to Common Crow in Gloucester, and that he grew up around crates of produce, helping clean the floors there as a child. He said being at The Open Door feels like "second nature." He also said he likes using ingredients to their full potential.

"I'm friends with a lot of the farmers around here," McKenna said. "I like the responsibility of using something to the best of my ability and utilizing the ingredient to the best I can, even if it is just a carrot. You've got to do right by it. Someone took the time to grow it. ...

"The Market has a bit fancier clientele, but I think food is a right, not a privilege," he added. "Everyone deserves to eat good food."

Karen Andrew finds that cooking for those in need isn't just a creative challenge with sometimes limited, varying ingredients. It speaks to her heart, she said.

Andrew will be preparing holiday meals for Seeds of Hope, a shelter operated by Salem-based nonprofit Lifebridge, where she has been the kitchen manager for six years.

"(When) I saw this job, it really spoke to me," Andrew said. "If you are into this business, you have to be creative, but also have a heart to serve. I've always had a heart for the homeless, so it was the perfect match."

Andrew is responsible for the community breakfasts and lunches prepared at Seeds of Hope at 56 Margin St. Before working for Lifebridge, she worked in the culinary industry for more than 30 years. She was once the catering manager at Gordon College in Wenham, owned her own business, and worked for caterers on the North Shore.

Before she moved to Massachusetts in 1988, Andrew studied culinary arts for two years at a community college in California. That was in the mid-1970s.

"I have worked my way up," she said. "I worked for caterers ... just the school of hard-knocks kitchen."

Andrew is the only paid kitchen staffer at Seeds of Hope. She said approximately 400 volunteers visit Seeds of Hope a month and help her prepare food. They also cook dinners and weekend meals.

"I couldn't do it without my volunteers,"she said. "I am very lucky I have these volunteers that come in."

There's another big difference between working at a restaurant and a shelter: Andrew never knows what she'll get when she opens up the refrigerator in the morning. That's because Seeds of Hope operates on large donations of food from places such as Whole Foods, Crosby's Market and Panera.

"You just have to try to be creative and outside the box, which makes it fun," she said. "It's my own giant version of 'Chopped.'"

At Haven from Hunger on Wallis Street in Peabody, Brianne Jurs, assistant program director, is also planning for the holidays. One of two paid staff members at Haven, which merged with Citizens Inn in 2017, Jurs runs the community meals offered at night. For Christmas this year, Haven from Hunger will serve a roast beef dinner with potatoes and vegetables, as well as appetizers and warm beverages.

"A lot of people get filled up on that and take their meal to go. That's quite all right," Jurs said. "We serve up a really safe place for people to come to not feel judged, to be able to keep their pride and just enjoy a meal with friends."

"We just want someplace warm and hospitable for people to come, so there's food, but there's also community," she added. "And just the spirit of this time of year, it's really hard for a lot of people. To have a place to go where you can feel safe and you feel welcome is a big thing this time of year."

Jurs also said there will be music and decorations for holiday meals, as well as cookies and breads available for people to take home.

"What's Christmas without Christmas cookies you're snacking on later in the day, or the next day?" she asked. "We'll have plenty of things for people to take home and enjoy with friends and themselves."

On any given day, between 30 and 50 people have dinner at Haven from Hunger in person, Jurs said. Including take-home meals, however, she said she prepares food for between 80 and 100 people a night.

Jurs didn't study culinary arts, but said she has always enjoyed cooking. She concentrated on sociology and gender studies at the University in Bloomington in Indiana before she got her master's degree in Marriage and Family Therapy from Louisville Presbyterian Theological Seminary. She moved to Massachusetts 10 years ago to be a mental health therapist on the South Shore, but left a few years later after "burning out." Most recently, she worked in hotel management in Peabody for five years, and she joined the staff at Haven from Hunger this March.

"I have no formal culinary training, I just really like to cook," Jurs said. "And I really like working with what I have. I grew up on a farm in Indiana trying to make the most of what we had. We lived far away from a grocery store, so it was cooking what we had on hand and making do. It kind of takes me back to being a child and cooking with my dad in the kitchen."