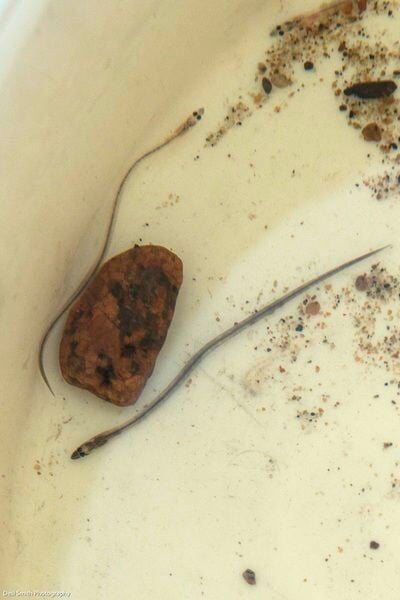 DESI SMITH/Staff file photo/Some elvers identified by NOAA's Eric Hutchins are collected in a 5-gallon bucket. The baby eels have come to Rockport's freshwater ponds in numbers this spring greater than all the eels counted last year. 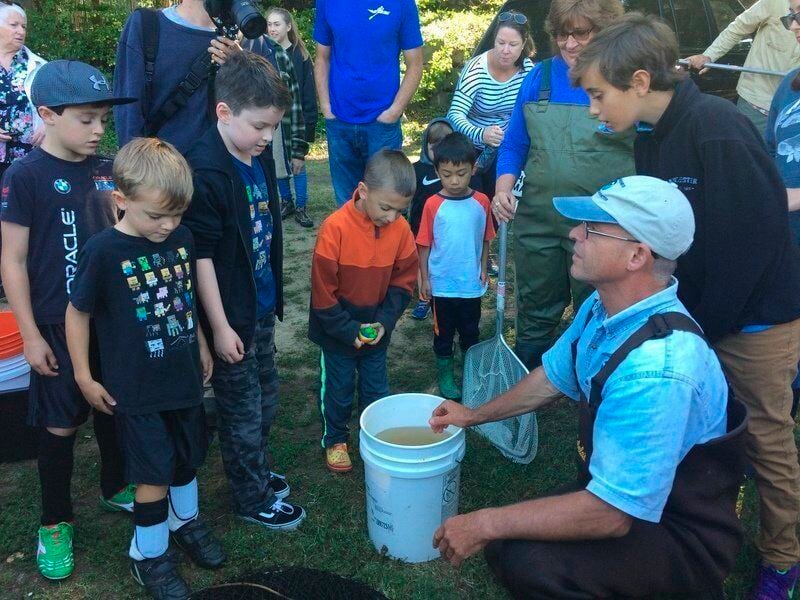 DESI SMITH/Staff file photo/Some elvers identified by NOAA's Eric Hutchins are collected in a 5-gallon bucket. The baby eels have come to Rockport's freshwater ponds in numbers this spring greater than all the eels counted last year.

ROCKPORT — Consider the full life of the American eel and what it takes for the wee critters to find their way from their birthing grounds in the Sargasso Sea to the town's historic Mill Brook.

Once born, eel eggs float to the surface of the salt water spawning grounds northeast of the Bahamas and southwest of Bermuda. They hatch into transparent larvae. If they had thumbs, this is when they would stick them out. No appendages mean no thumbs. Still, they manage to hitch a ride.

Largely left to the whims of wind and currents, the larvae begin a year-long journey to fresh water portals. Some land as far south as the north coast of South America. Others travel as far north as Greenland.

And some hit the sweet spot, crossing the Atlantic Ocean to the Mill Brook and from there up into Rockport's Mill Pond and Loop Pond, and perhaps as far away as Briar Swamp in Dogtown. In all, they swim more than 1,000 miles.

Waiting for them is Eric Hutchins and his merry band of volunteers, nature's own census takers for the eels that have by now matured from larvae into translucent elver stretching roughly 2 to 4 inches.

From April 1 to Columbus Day, the crew counts the eels that accumulate in a stationary catch-and-release trap. So far, 2021 has been a good year, with Hutchins and his approximately one dozen volunteers putting about 350 elver in the books.

"By the end of this week, we will have counted more eels than all of last year," Hutchins, a NOAA Fisheries biologist and Gulf of Maine restoration coordinator, said Tuesday. "That's still horrible when compared to 20 years ago. But you take an uptick when you can get one."

The Rockport experience may be part of a larger trend.

Hutchins said his conversations with Brad Chase of the Massachusetts Division of Marine Fisheries indicate the early counts at elver runs throughout the state also show improvement from 2020, when the elver proved extremely eel-usive.

In Rockport at the end of May 2020, the count was five — as in one more than four and one less than six. And what accounts for annual disparities such as this year and last?

"We have no idea," Hutchins said. "It's part of the mystery of eels."

Mystery? It's a riddle wrapped in larvae, stuffed inside an elver.

Once in the freshwater ponds, eels can live as long as 30 years and grow up to 5 feet long.

As they mature sexually, they turn their beat around.

When the leaves begin to turn, and the thoughts of mature eels turn to other mature eels, they re-enter the Atlantic Ocean for the return trip to the Sargasso Sea.

Their route remains a mystery, as does their method of navigation. EPS, perhaps? They generally arrive at the spawning grounds in February.

One thing devoid of mystery is their fate: Soon, after mating, they die.