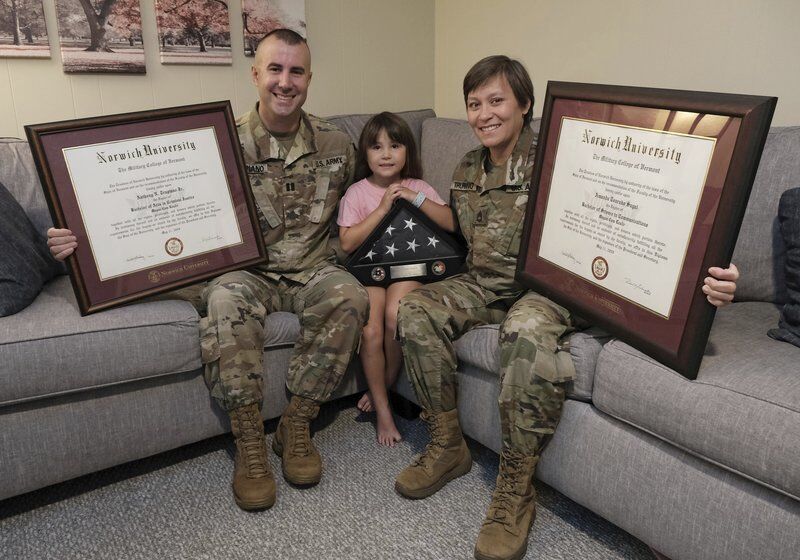 Anthony and Amanda Trupiano hold their degrees from Norwich University as their daughter Hayden Trupiano, 5, holds an encased American flag, part of the Welcome Home Warrior-Citizen Award that acknowledges service abroad by soldiers in the Army Reserve. 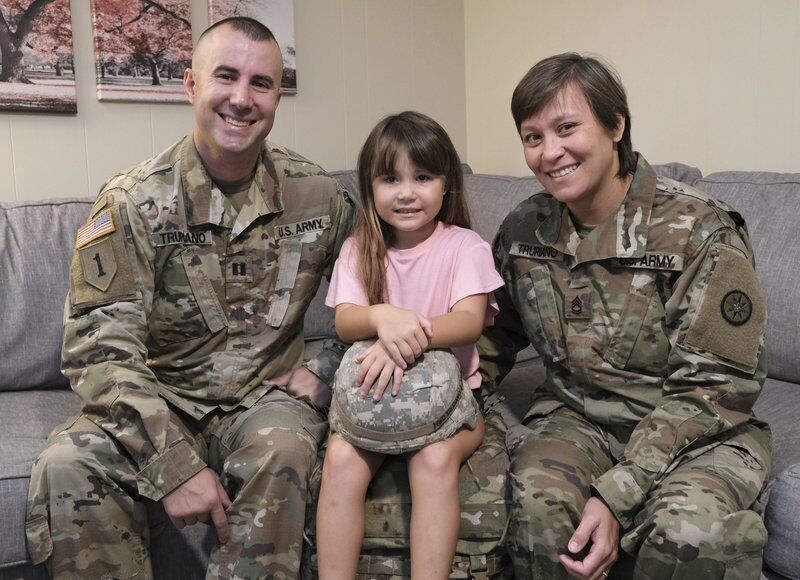 Anthony and Amanda Trupiano of Gloucester sit with their daughter Hayden Trupiano, 5,  serve in the Army National Guard. 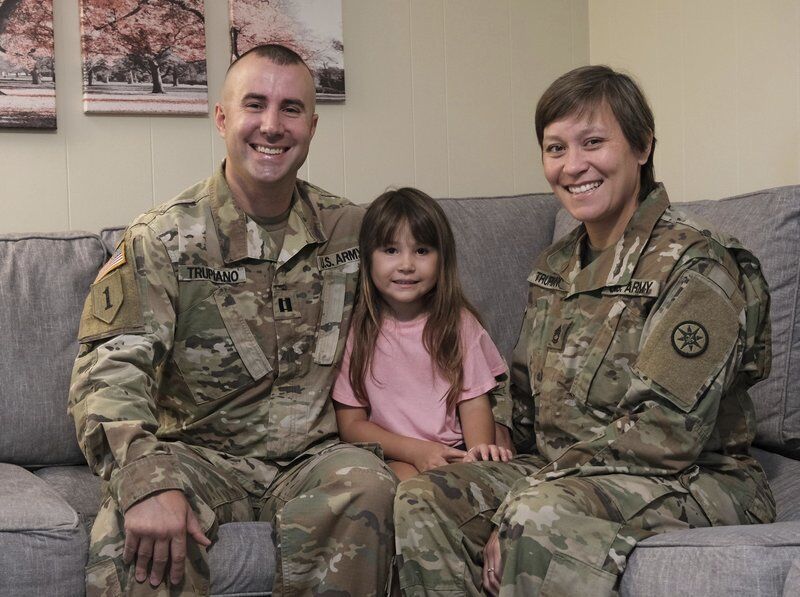 Anthony and Amanda Trupiano of Gloucester sit with their daughter Hayden Trupiano, 5, serve in the Army National Guard.

Anthony and Amanda Trupiano of Gloucester sit with their daughter Hayden Trupiano, 5,  serve in the Army National Guard.

Anthony and Amanda Trupiano of Gloucester sit with their daughter Hayden Trupiano, 5, serve in the Army National Guard.

They weren't even on the same continent when darkness, in full wing and fury, rained terror on the shores of America on Sept. 11, 2001.

Amanda Trupiano was a freshman in high school in Mannheim, Germany, where her career Army father was stationed.

Stories related to this series

Anthony Trupiano, the son of a Gloucester firefighter, was a sophomore at Gloucester High School, roughly 3,650 miles away.

But, given their intertwined stories of love and loyalty, of family service and shared conviction, it now seems almost inconceivable that they wouldn't find each other.

They met at Norwich University, the Vermont military university, and later each joined the U.S. Army — Anthony as a commissioned first lieutenant on active duty and Amanda as a reservist in the Army National Guard.

They both deployed — at different times and separately — to the hellfires of Iraq as America's wars in the Gulf region stretched on.

They've both continued their service in civilian life.

Anthony, 36, is a Gloucester police officer — full-time since December 2020 — and remains a captain in the Army National Guard.

Amanda, 35, is a registered nurse at Winchester Hospital and a 14-year veteran of the Army National Guard.

In perhaps their greatest service, they are the parents of their 5-year-old daughter Hayden.

And on 9/11, the spectacle of America being attacked helped crystalize each of their respective commitments to serving their country.

And that commitment, as if the beginning of its own fable, led them to each other.

"I was a sophomore and I was in biology class," Anthony recalled of the 9/11 attacks. "The first plane had already hit the first tower and we actually watched as the second plane hit the second tower."

In Germany, particularly on base, the attacks resonated for Amanda as if she and her family were still living in the states.

"The whole base went into lockdown," Amanda recalled. "The school closed and there were armed guards patrolling everywhere. The worst part was we couldn't even call the U.S."

In Gloucester, Anthony had an additional worry. On the morning of the attacks, his father Tony, in Florida to visit Anthony's sister, was scheduled to fly back to Boston.

"His flight hadn't actually left before they established the nationwide no-fly zone and he ended up having to drive back." Anthony said. "It was a very scary time because you didn't know what was happening."

Fast forward to Norwich. Amanda planned to commission into a branch of the military upon graduation in 2008.

But during one of the final steps in the recruitment, while she was still in school, Amanda was denied enlistment because of a back injury.

Undaunted, she kept trying to enlist and was consistently rebuffed.

"In all, I tried to enlist eight times," she said.

Finally, in her junior year, a doctor signed off. She signed her enlistment contract in her senior year.

Upon graduation in 2008, Amanda completed her basic training in Missouri and joined her reserve unit based in Keene, New Hampshire.

In June 2010, Amanda and her unit deployed to the Gulf region, first to Kuwait and then, on the Fourth of July, to Iraq. She was stationed at Army base Spiker in Tikrit.

She hauled fuel, equipment and supplies all over northern Iraq, up to the border with Kuwait.

"It was a great experience, a great unit," Amanda said. "It was obviously difficult being in that sort of situation. But it helped make me a soldier."

Anthony initially pursued a career in law enforcement upon his graduation from Norwich, but those jobs were scarce. So, in 2010, he enlisted in the Army and was commissioned the next year.

As he was completing his officer candidate school training, Amanda rotated back and they got married in 2011, about two weeks after Anthony received his commission.

"We actually didn't see each other for over a year," Anthony said. "We got engaged four months before she actually deployed. And then she had gotten back while I was in training. So I didn't see her until June 2011."

He and his Army unit — 1st Brigade, 1st Infantry Division — deployed to the region, first to Kuwait and then into Iraq to help fight the surge of the Islamic state, ISIS.

He served as an intelligence and advanced reconnaissance team leader in northern Iraq, where the Army was not only fighting ISIS, but also trying to perform humanitarian missions for those being persecuted by ISIS.

"My wife, since she deployed first, had tried to describe it for me and paint a picture of what it was actually like," Anthony said. "I kind of painted my own picture when I got there. A lot of the stuff she had talked about, I was able to relate."

Anthony, by now a captain, rotated home in March 2015 and left active service the next year.

"One way or another, I knew that somehow I was going to serve my country in the military," Anthony said. "From an early age, I was always intrigued and attracted to actually serving. There was always something there, deep down inside. Kind of a calling."

How could they not find each other?

Staff writer Sean Horgan talked to four Gloucester veterans about 9/11 and how it shaped them.

When the call came, they answered it

Two decades later, we still walk in the shadows of the towers.