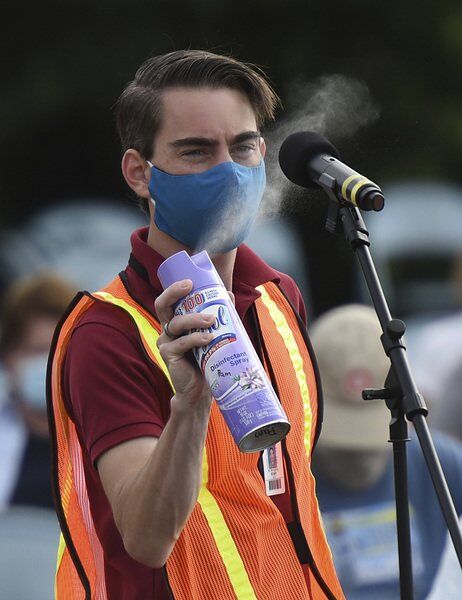 PAUL BILODEAU/Staff photo. Town employee Michael Montgomery uses Lysol to disinfect a microphone after it was used during Rockport Town Meeting on Aug. 8, which was postponed from April due to COVID-19, and held outside behind Rockport High School. 8/8/20 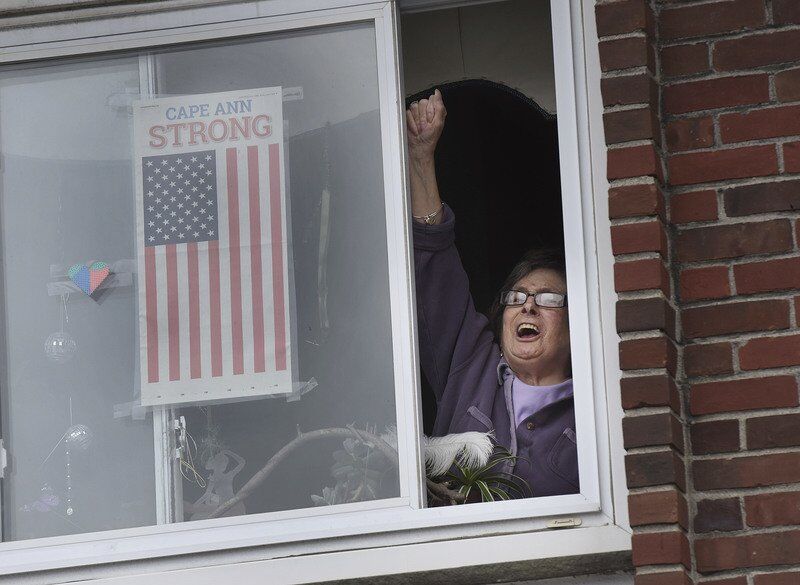 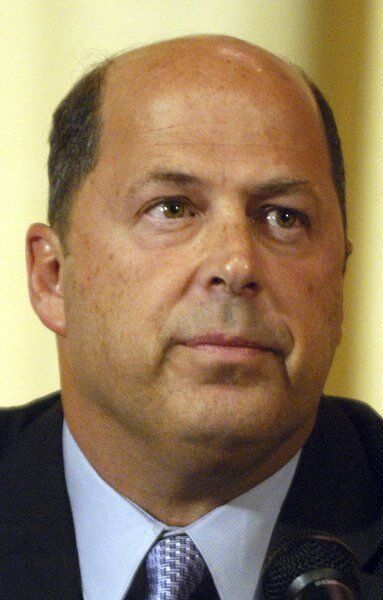 TAYLOR ANN BRADFORD/Staff file photo/Jim Destino, Gloucester's former chief of administration, had planned to retire April 3 to spend more time with family but stayed on through June to help the city weather the coronavirus pandemic. 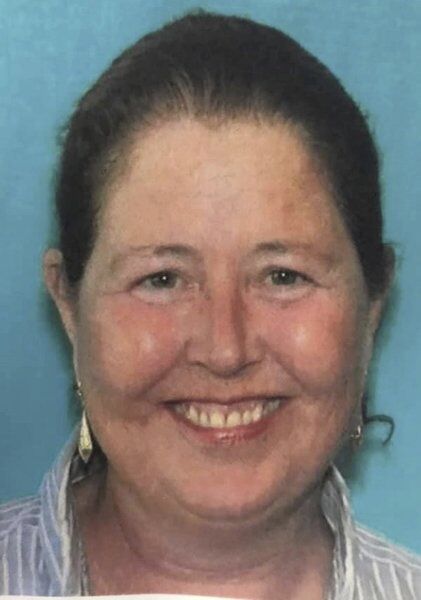 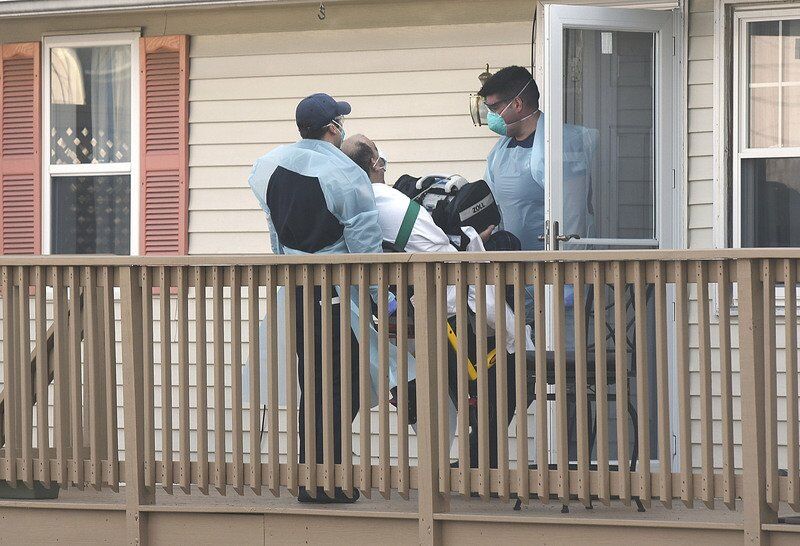 PAUL BILODEAU/Staff photo. Fire fighters in protected equipment carry a man in portable chair from his home in Gloucester. The call on the scanner was for someone in respiratory distress in Gloucester. 3/26/20 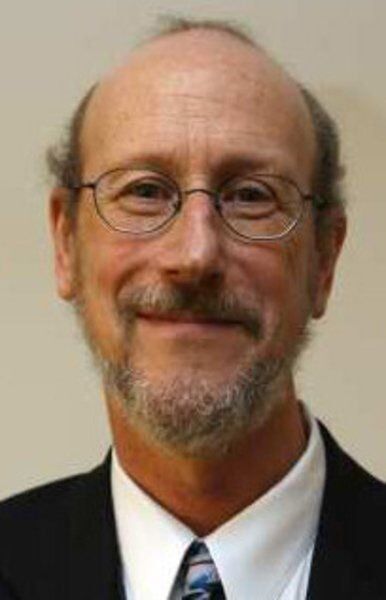 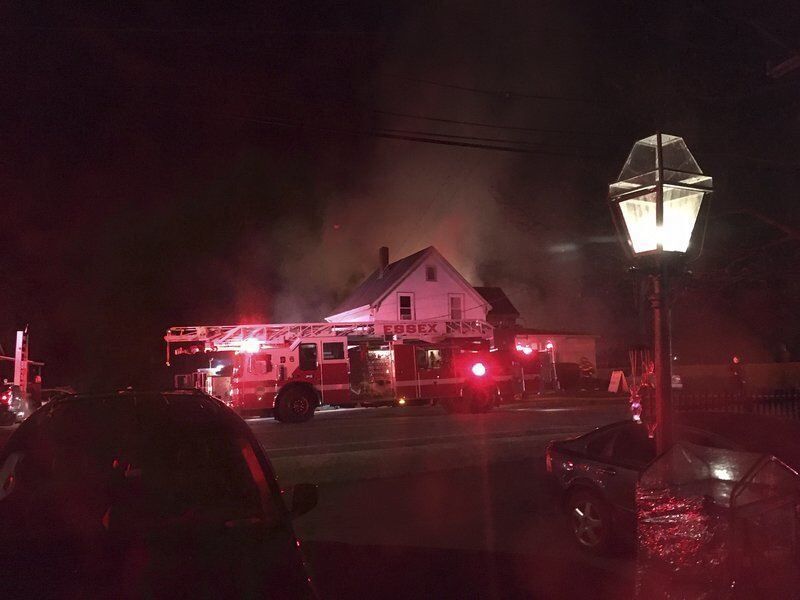 CHRISTA McDONALD/Staff file photo/Local firefighters battle a fire at Essex Seafood, 143 Eastern Ave. in Essex on May 10. A gas heater was blamed for igniting the blaze, which gutted the building. No injuries were reported.

PAUL BILODEAU/Staff photo. Town employee Michael Montgomery uses Lysol to disinfect a microphone after it was used during Rockport Town Meeting on Aug. 8, which was postponed from April due to COVID-19, and held outside behind Rockport High School. 8/8/20

TAYLOR ANN BRADFORD/Staff file photo/Jim Destino, Gloucester's former chief of administration, had planned to retire April 3 to spend more time with family but stayed on through June to help the city weather the coronavirus pandemic.

PAUL BILODEAU/Staff photo. Fire fighters in protected equipment carry a man in portable chair from his home in Gloucester. The call on the scanner was for someone in respiratory distress in Gloucester. 3/26/20

CHRISTA McDONALD/Staff file photo/Local firefighters battle a fire at Essex Seafood, 143 Eastern Ave. in Essex on May 10. A gas heater was blamed for igniting the blaze, which gutted the building. No injuries were reported.

The door cannot possibly close quickly enough on 2020. Any dissent on that treatise? Thought not.

The last 12 months, beginning with the first reports from Wuhan, China, of a deadly contagion of lightning speed and indiscriminate reach, have been a study in daily challenges testing the resiliency of every individual on the planet and the institutions that frame our lives.

Nothing escaped. No one was spared by the great sea change to routine and reality. Every aspect of our daily norm fell to the overarching COVID-19 pandemic and its response.

Each social, recreational, cultural, governmental, political, familial, educational and religious pursuit gave way to its power and the restrictions that still flow.

It altered the very touchstones of our life cycle, from how we now celebrate the arrival of our wee ones to how we honor those departing the world. It created border wars and gave rise to even more conspiracy. As if we needed that.

On Cape Ann and around the world, the pandemic was the dystopic backdrop to every other major story.

It gathered in the folds of the most acerbic and hateful presidential election in more than a century. It hung like a shroud over George Floyd and the civil upheaval that played out on American streets as we once again grappled with our national failings in matters of race and justice.

It closed our schools and libraries, darkened our theaters. It turned travel into an Orwellian adventure. It gutted our restaurants and rammed our fishing industry like a rogue wave.

It made a beer at the bar a dim and distant memory. It made friends absent and sent our sports teams into bubbles and empty stadia. It cut our salaries and sometimes our jobs. And it often determined who we could see and when we could see them.

Despite its exhausting and unrelenting nature, despite the divisions and vitriol and the loss of more than 300,000 lives in the United States alone, we're still standing. Wobbling, but north of the canvas, still washing our hands, trying not to touch our face and GPSing the aisle arrows at the grocery store.

The seams of the republic, perhaps democracy itself, have held and now we navigate the rubble to 2021 and that slight glow of light warming the horizon.

The presidential election, if not the full hysteria, is over and we know the deal moving forward. Vaccines are arriving in our communities. Can the nascent threads of a sustainable comeback — economic, medical and spiritual — be all that far behind?

One thing is clear: We will not just turn the calendar page this New Year's Day. We shall burn it and slam the stove door on the ashes of 2020. And then we shall plot a straight course into 2021, stubborn into the wind. There is no other way home.

Here are some of the other stories that merited attention on Cape Ann in 2020:

In January, the Army Corps of Engineers commenced the dredging of the Annisquam River to return the federal channel to a uniformly navigable body of water.

In February, on Super Bowl Sunday, Abbie Flynn left her St. Louis Avenue home on Eastern Point sometime in the late afternoon and was never seen again despite a massive search by Gloucester police and a myriad of other law enforcement and public safety units.

Gloucester School Superintendent Richard Safier announced he was retiring from the post at the end of the school year. In June, the School Committee selected Ben Lummis as Safier's successor.

In April, the city lost the first of the two fishermen it would lose in 2020 when Nicolo Vitale, a crewman aboard the Miss Sandy, went into the water off the back of the fishing vessel and drowned. In November, Gloucester native Michael Porper Jr., now living in Maine, was one of four crew to die when the fishing vessel Emmy Rose went down off the coast of Cape Cod on its way back to Gloucester to land catch.

In April, Mazzetta Company sold its fish processing plant (formerly the Good Harbor Filet facility) in Blackburn Industrial Park for $9.3 million. It was bought by the Quincy-based Grossman Companies. Cometeer, an innovator in coffee delivery systems, became the sole tenant.

In May, organizers canceled the summer's Bluefin Blowout — the first major event to fall to the pandemic. It was followed later in the summer by the city's venerable St. Peter's Fiesta and the Schooner Festival.

In June, Jim Destino, the city's chief of administration and a vital cog in the administration of Mayor Sefatia Romeo Theken, retired from city service.

Also in June, owner Dennis Flavin closed his Halibut Point restaurant after 40 years and put the eatery and property up for sale.

In July, the Happy Valley Ventures marijuana dispensary opened in the Blackburn Industrial Park, bringing 127 jobs with it. The dispensary was one of several new facilities rising throughout the city, joining the affordable housing project at the site of the former Cameron's restaurant on Main Street and the sprawling YMCA mixed-use development project on the site of the former Fuller School.

The same week, a judge ordered the city to issue special permits for the condominium project proposed at the site of the former Espresso's restaurant on East Main Street.

In December, Robert J. Gillis Jr., president of Cape Ann Savings Bank, announced he would retire from the post in July 2021.

In January, police swarmed all over the grounds of Rockport Middle School after one student stabbed another. The victim, whose injuries were not life-threatening, returned to class in about two weeks.

In February, not long after the disappearance of Abbie Flynn in Gloucester, police confirmed the remains of Theresa Coen, who had gone missing in Rockport in 2018, were found off the coast of Cohasset. Foul play was not suspected.

In May, the body of a Gloucester woman, Elizabeth Duff, was found in the Little Parker Pit quarry. Foul play was not suspected.

In November, members of the Rockport Fire Department threatened to quit over claims of department mismanagement. That prompted town officials to schedule an audit of the department. Also, Chief James Doyle was placed on administrative leave and officials suspended the position of emergency services held by Mark Schmink, the assistant police chief.

In May, the popular eatery Essex Seafood closed after a fire damaged the restaurant on Mother's Day night. There were no injuries. The owner is rebuilding.

And throughout the year, construction continued on the town's new public safety building, which will house the police and fire departments.

In July, Christina St. Pierre, the highly respected town clerk, died at the age of 35 after a brief illness.

Throughout the year, despite the pandemic, the town continued celebrating the 375th anniversary of its founding.

Massachusetts: COVID-19 and the vaccine race weren't the only big stories.

Business: Who thrived and who lagged.

Tech: Winners and losers, from Zoom to Quibi.

SLIDESHOW: 2020 Photos of the Year

Every day, all year long, the Gloucester Daily Times photographers take dozens of pictures of people and places on Cape Ann. Each photo assign…